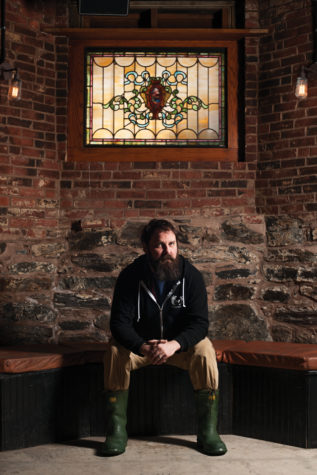 Mike Fraserthe man behind the revival 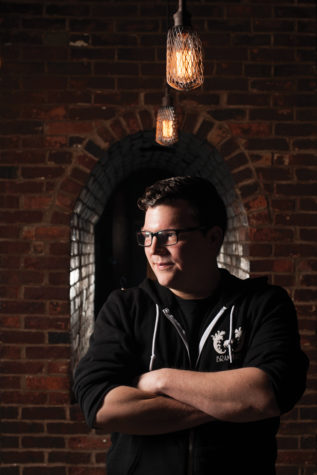 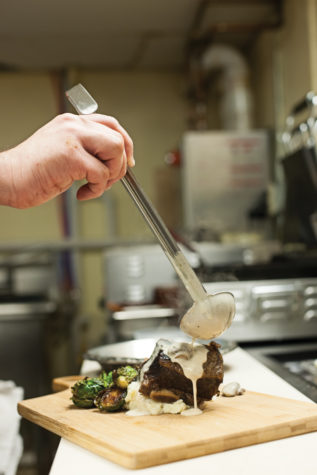 Theres no shortage of love coming from the kitchen. 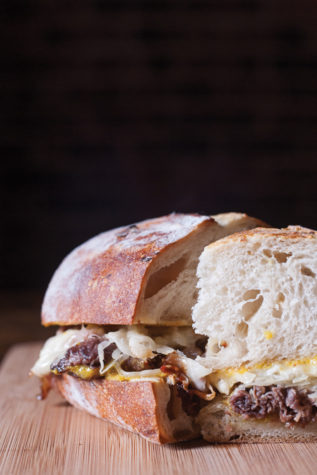 This brisket sandwich provides an excellent base. 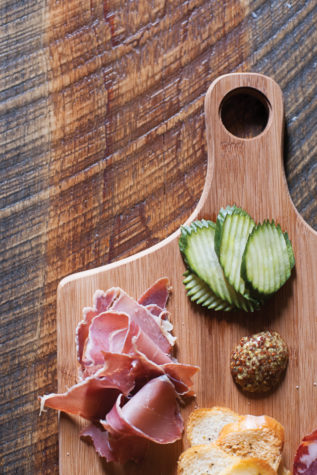 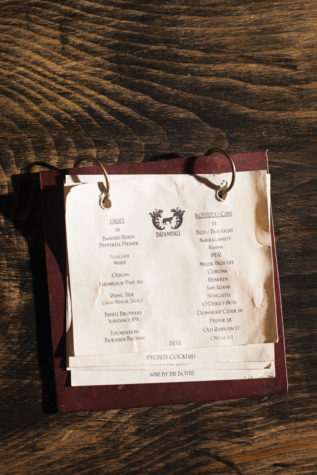 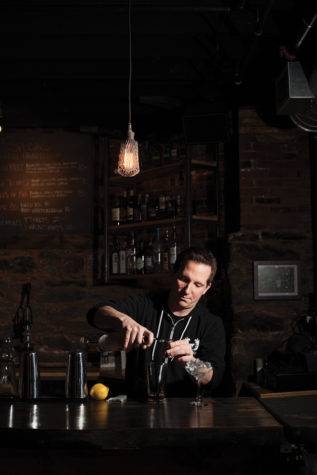 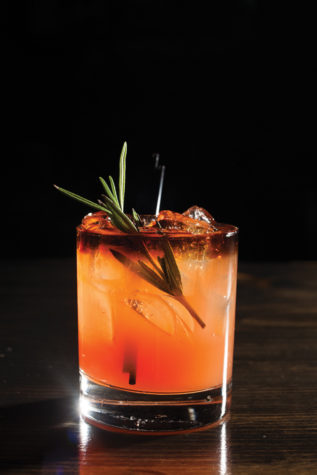 The Nurses Aide is all youll need. 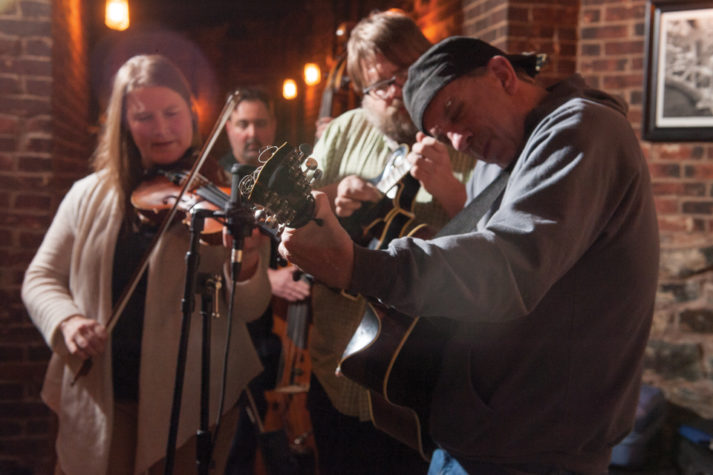 The Jerks of Grass are a welcome return from the Bramhall of Christmas past.

After an extended period of being shuttered, one of Portland’s favorite neighborhood pubs reopensand it’s better than ever.

The assurance of warmth emanating from behind the door stirs optimism as I descend into Bramhall’s subterranean chambers, and once I have shaken the icicles from my hair and cleared the fog from my glasses, I quickly locate a dark corner where I can properly settle in. Although the lingering late-afternoon daylight serves to illuminate a handful of stained glass windows, the bar is lit primarily by a combination of candlelight and dim sconces that line the walls. Encased in brick and stone, the centerpiece of the room is an old chimney, open on each end, filled with candles and an ever-growing layer of wax, which imparts even more character as it builds. Along the back bar, liquor bottles glow by way of LED lights that line the shelves, which in turn look quite handsome against the backdrop of brick wall.

The ambience alone, coupled with the cordiality of service that is neither ingratiating nor aloof, moves me to feel immediately at home. This is exactly how a great bar should be, aided by a selection of beverages that is both well thought out and versatile. This responsibility has been executed skillfully by bar manager Guy Streitburger. Each menu, from the cocktail list to the food, is small yet concise. The goal here is to keep things streamlined and avoid overwhelming the patrons, but it also makes sense in regards to preparation and execution.

While I sip on a light, citrusy Oxbow Farmhouse Pale Ale, I take a moment to reminisce about Bramhall in its first incarnation, which had shuttered in 2009 before being revived by new owner Mike Fraser. I recall the room being set up lengthwise, and feeling considerably more like a neighborhood sports bar, complete with pool tables and dartboards. Now the focus is on the newly built bar, which is anchored at each end by porcelain bathtubs filled with ice and booze. The areas formerly occupied by gaming implements now hold benches and tables running the length of the room.

I meet with Fraser at his Portland residence, over dinner and a few bottles of wine, to discuss the long road traveled in order to bring new life to the historic pub, while still paying homage to the old business by preserving the dark and comforting atmosphere of the place. The space had been passed on by several potential tenants due to the multitude of renovations that would be required to bring it up to code.

“It was a huge undertaking,” Fraser tells me, “And I was trying to do most of it myself, with a friend’s help.” The process included the installation of a new sprinkler system, as well as entirely redoing applications with the city due to the space being vacant for as long as it was. Fraser and his team fought obstacle after obstacle, from floods to having their carpenters walk out on them, but managed to persevere. Much of the staff volunteered time, for free, in the final few weeks, allowing life to be breathed into the tavern yet again.
The pub’s logo, the silhouette of a wolf, is based on a window etching in the front of the building bearing the image of Romulus and Remus, the primary characters in the legend of how the city of Rome came to be. In the scene, the two future warrior kings are being breastfed by a large she-wolf. Fraser found the image captivating but thought it left a little too much room for interpretation, so it was narrowed down to just the wolf.

“I loved the Bramhall space, and remembered that it did a fairly solid business right up until when it closed,” Fraser says. “With the reopening I wanted to incorporate a little more of a restaurant concept into the bar, keeping everything really affordable in the process.”

Fraser teamed up with chef Chris Beaulieu, who envisioned food that felt home-cooked but with a creative spin. Initially, the emphasis has certainly been on “creative,” as Beaulieu works in a small galley with equipment limited to a crockpot, steam table, induction burners, flat tops, and a pizza oven.

In Bramhall’s kitchen, it’s clear that the team is maximizing every last bit of space. Burger patties line the small griddle, while short ribs bubble away slowly in the crockpot. Out of the pizza oven comes a hot, melty order of “loaded crisps,” kettle chips dusted with Beaulieu’s barbeque spice rub and topped with fresh cheese curds, applewood smoked bacon, crème fraiche, and scallions.

As I am sampling a dish of garlicky hummus, which is particularly enjoyable in contrast to the accompanying grilled vegetables marinated in lemon herb vinaigrette, Beaulieu appears with a whole salmon. On a cutting board, he breaks down the fish to cure for the gravlax plate with a traditional blend of salt, pepper, sugar, herbs, and lemon zest.

As Fraser puts it, “Our idea was not to try to push the envelope in the food department. We want to stay affordable, and Chris does a great job in balancing this out while maintaining the level of quality that needs to be there.” Bramhall is, at its core, simply a neighborhood bar—but rather than offer stereotypical fare they opt to put more thought and care into what kind of food thirsty bar patrons crave after a long night. The meat and cheese plates, for instance, contain selections such as spicy smoked Tasso ham and Idiazabal, a semi-firm sheep’s milk cheese from Spain.

Out at the bar, the room is starting to fill up with customers so I secure a seat, where Streitburger offers me a cocktail. I begin with the Damn the Queen, of which the base is formed by Bushmills Irish whiskey, mellowed by the spice and honey notes of Drambuie and accentuated with orange bitters as well as flambéed lemon peel, giving the drink a finish that is reminiscent of lemon hard candy. This disappears quickly, and I move on to the Scofflaw, which employs Streitburger’s grenadine, made with pomegranate and warm spices, along with rye whiskey, Cocchi Americano, and orange bitters. It proves to be an easy transition from my first beverage, and I feel it may be prudent to eat a bit more food before proceeding.

The hallmark of most pubs is the burger. Beaulieu starts with a patty of Angus beef ground with bacon from North Country Smokehouse. It’s cooked on the griddle, topped with melted cheddar, tomato, and whole grain mustard relish. All of this is nestled into the nooks and crannies of a sandwich-sized Thomas’s English muffin, which I personally appreciate for reasons of nostalgia. Looking for a wine to pair with my burger, I appreciate the small wine selection that offers two great bottles, Henri Bourgeois sauvignon blanc and Guidobono Nebbiolio, for well under $30. The wine list is so often an afterthought for bars, and I have never understood why, given the range of options out there at this price point.

Reflecting on how well the pub has been received thus far, Fraser couldn’t be happier.

“To me, this is a dream come true. I really mean it,” he says, “And the most rewarding part is when people tell me they used to come here 15 years ago, and they love it even more now.”

Judging by how packed the bar is every time I have visited since, the neighborhood agrees.