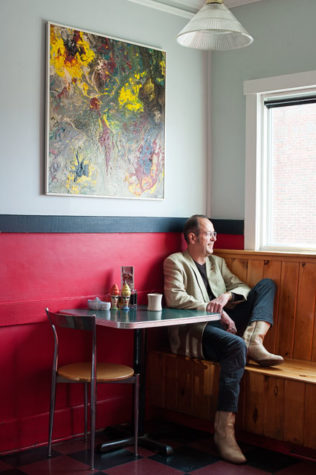 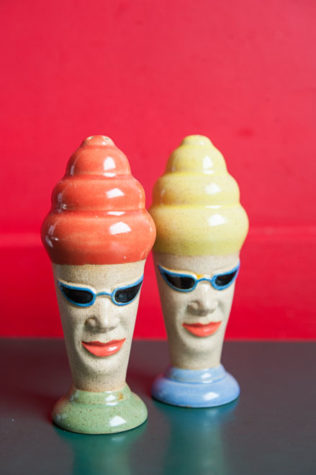 The decor is as diverse as the menu. 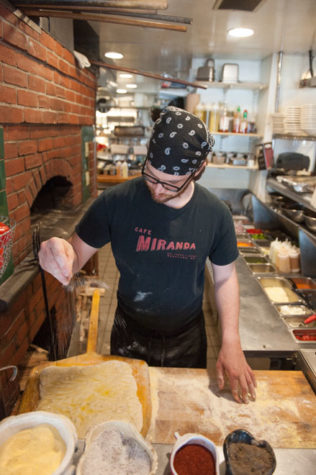 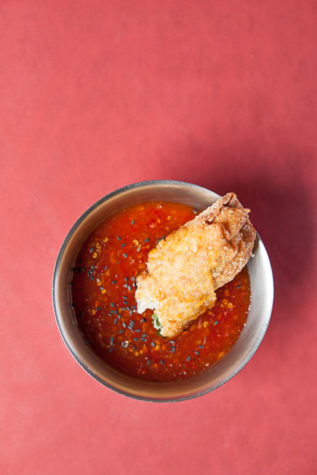 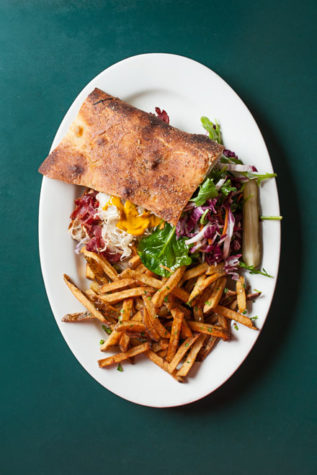 Reuben sandwich makes use of their ethereal focaccia bread. 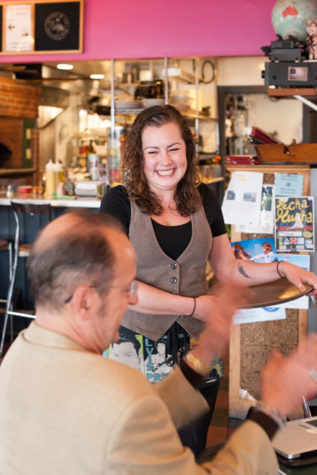 Chef Kerry Altiero’s philosophy remains the same but his bold menu, infused with stories, continues to get better with time

Freedom was the primary motivation that prompted chef Kerry Altiero to open Cafe Miranda well over 20 years ago. If he was going to make it in the business, it was going to be on his terms. Now, with a loyal clientele and a menu that is as diverse as the eclectic decor of the dining room, Altiero still maintains the same amount of enthusiasm for his work, day in and day out.
“I wanted to create a menu that was so insane that no one else would ever let me do it,” says Altiero. He is referring to the wildly diverse range of foods that Cafe Miranda has become known for, with a sprawling menu listing well over a hundred different items and drawing influence from every corner of the world. What’s remarkable is that almost every single one of these has a story behind it, from a series named after a former server and his after-work eating preferences—the Jerry Fries and I Dreamt of Jerry burger, made with a strange, addicting combination of sweet chili sauce and blue cheese—to dishes that emerged almost accidentally from whatever happened to be on hand, to satisfy Altiero’s late-night cravings.

The key to the execution of a menu this large is doing as many combinations as possible while keeping the number of ingredients to those that will fit in the walk-in cooler. The constraints still allow for enough elements to make many cooks dizzy, especially given that new dishes are added regularly.

“The only thing I haven’t changed since 1993 is the meatballs,” Altiero tells me, referring to his Nanna Connie’s recipe, which utilizes pork and veal to produce an end result so tender that he refers to them as “meat truffles.” The meatballs feature in the cover shot on his cookbook, Adventures in Comfort Food, published in 2014.

The heart and soul of Cafe Miranda is its venerable brick oven, built by Patrick Manley at Brick Stove Works in Washington, Maine. You haven’t lived until you’ve had a slab of Altiero’s focaccia bread, straight from the oven and topped with a liberal amount of salty butter that melts throughout every crevice. The heat from the oven and the aromas of the food that come out of it infiltrate the dining room. “We run the oven ripping hot and it’s fueled by dried maple and ash,” says Altiero. “We don’t have a thermometer and we don’t care.”

Chef Andrew Hansen, who mans the kitchen directly under Altiero, describes the spectacle of pans being shuffled about in the scorching fire during a busy dinner service. “It can put you in the weeds for sure. It’s sort of like a really talented dance partner in that you can let him or her throw you around, but you’d better not fall down.”

Community is the foundation the restaurant is built on, and over time Miranda has become an integral part of Rockland’s identity. Altiero has literally watched people grow up eating his food, and knows they never stop loving simple comforts like Pasta Chicken, a perfect storm of fried chicken tossed with cheese, marinara, and crispy pan-fried rigatoni. The menu is scattered with personal jokes, innuendoes, and sometimes memories that are bittersweet for him but remain very important to the story of Cafe Miranda. There are dishes named after two ex-wives and a salad called the Bleu Job; nothing is sacred. This place is Kerry Altiero. Even the beer selection, most notably under the heading of “American classics,” refers back to his days growing up in Shenandoah, Pennsylvania, with tall cans of Genesee Cream Ale and the 40-ounce Colt 45 malt liquor served in a paper bag.

While there are inside jokes and memories spilled around the bar and on the menu, at the core of Cafe Miranda is a very serious restaurant. Dishes such as General Sam’s Honky-Tonk Egg Rolls are some of the best I’ve ever tasted, filled with luscious smoked chicken confit before being deep-fried and served with a spicy mustard infused with lime, cilantro, and fish sauce. In Hummus Goes to Italy, Altiero combines pureed artichokes and ceci beans with lemon, parsley, and marinated tomato before dousing it all with rich, delicious olive oil—yet another perfect accompaniment for the superlative focaccia. The aforementioned meatballs, silky on the inside and seared until they attain a crunchy outer layer, are served in a decadent sauce driven by veal demi-glace and roasted garlic. The rest of the menu runs the spectrum from pierogies to Korean-style pork belly, while incorporating the basics like cheeseburgers, hot dogs, and pizza (because, with that oven, it would be crazy not to make pizza).

Facilitating the entire menu is fresh produce from Altiero’s own Headacre Farm, located at his house a few miles away in Owls Head. Farmer Anne Perkins works entirely without the aid of machinery and grows everything from kale to Hungarian wax peppers to heirloom tomatoes. The operation grows each year, now with five employees, and has even recently expanded to include honeybees

Altiero’s roots are summed up when he explains that, “I was a vegetarian in the 70s, and if you wanted to eat back then you had to learn to cook.” Although he has now been an omnivore for quite some time, his food still reflects that same philosophy of “if I want it, I will create it myself.” Throughout his career, Altiero has seen significant changes to the culinary world, and has managed to stay on his own path, unhindered by the ebb and flow of culinary trends.

His answer to most questions regarding the scope of Cafe Miranda, and why he does what he does every single day, is quite straightforward: