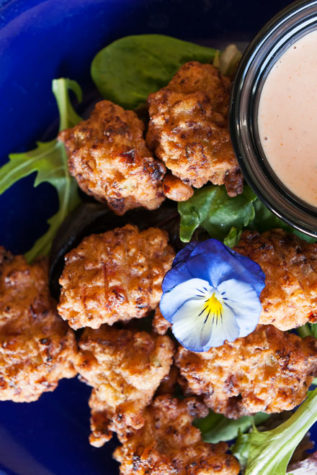 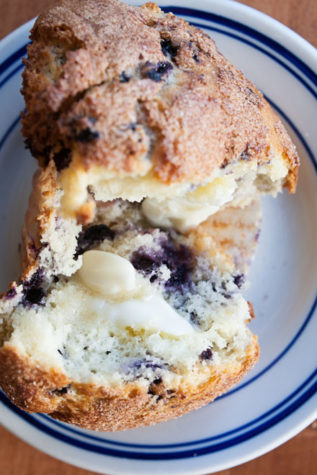 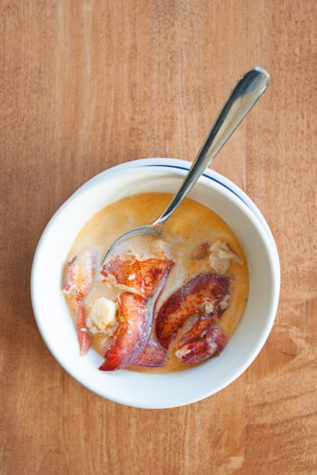 Lobster stew is one of the oldest family recipes. 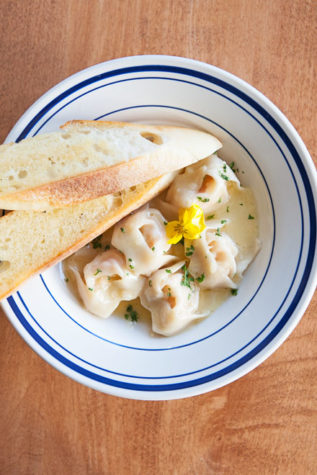 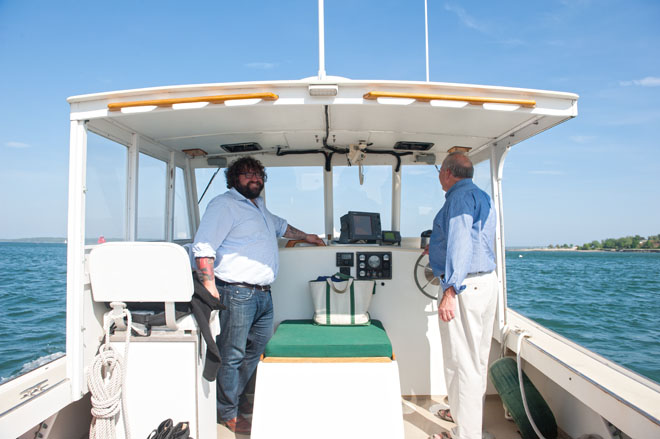 The author, Joe Ricchio, and boat captain Jon Dietz aboard their Holland 32 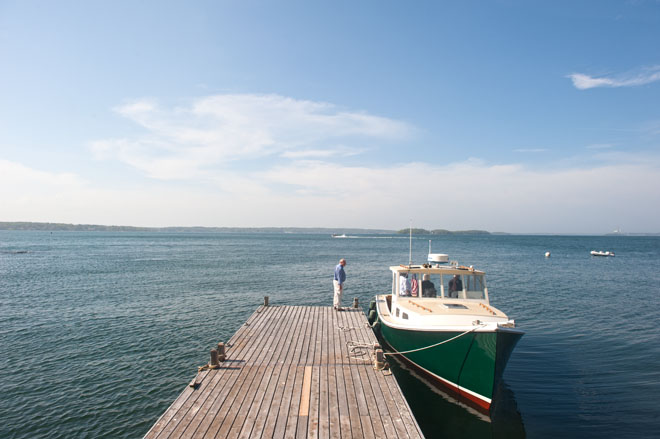 A little bit of chop on a stormy day should never be a deterrent to lunch on the water. 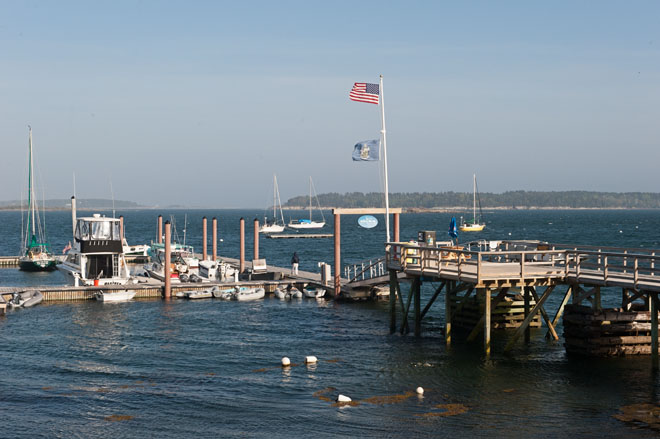 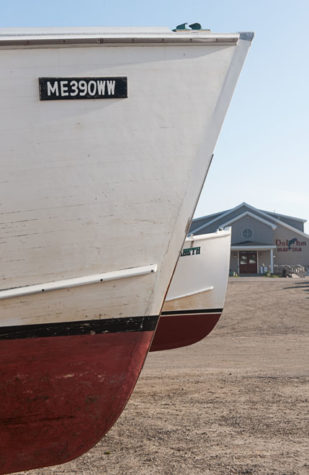 Ships yet to be at sea 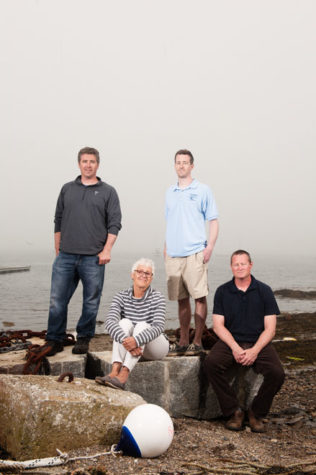 The Dolphin Marina and Restaurant

You certainly can drive there, but to fully experience the Dolphin you really need to go by boat.

Every person echoed this same advice when I inquired about the Dolphin Marina and Restaurant, which is located on the tip of Basin Point in South Harpswell. And so, despite choppy conditions and the slight chance of thunderstorms, I happily boarded my friends Jon and Bonnie Dietz’s Holland 32, built in Belfast, and made my way to Potts Harbor to see what everyone was talking about. Upon arrival, we are greeted by the boatyard crew, who help us tie off and direct us towards the restaurant. It sits on the point and is dominated by a panorama of large picture windows as well as an outdoor patio. In my opinion, this is the perfect setting to consume an obscene amount of seafood.

When I step into the restaurant I notice the surrounding Casco Bay views from inside, but I am immediately mesmerized by the warm, inviting aromas of freshly baked blueberry muffins. Blueberry muffins are the hallmark of the Dolphin and are served with every meal in lieu of bread and butter. Mimi Saxton, who owns the restaurant with her husband, Bill Saxton, tells me, “It was really my mother-in-law’s thing, but once you have them, you fall in love with them. Many people say that as you walk towards the restaurant on a rainy day you can smell the cinnamon in the air.”

Chris Saxton, Mimi’s son, oversees the business with his brothers, Billy and Jeremy. I soon learn that nearly everyone involved with the restaurant is part of the family, and their story is best heard over a plate of perfectly fried whole belly clams with tartar sauce. Malcolm Saxton started the business in 1967. In the very beginning it was predominantly a marina, which had rental boats, a few moorings, and gasoline. Malcolm’s wife, Virginia (called Jean) decided that she wanted to be part of the business, and together they built a small coffee shop where seven days a week they served the local fishermen. The menu was simple—fish chowder to accompany the blueberry muffins (the point itself used to be covered in blueberry patches), homemade desserts, and a “businessman’s lunch,” which could be anything from American chop suey to beef stew. Jean also loved to play cribbage. She taught all of her grandchildren to play and would host small tournaments—a tradition that has carried on; there are still boards available for guests in the tavern.

Mimi started as a waitress in the restaurant’s first season, where she met Jean’s son Bill, whom she would later marry. “In a simplistic sense, our grandparents started the business and our mother built it,” says Chris. “Dad’s focus was on the marina and Mom’s was the restaurant—she would come in early in the morning, bake the muffins, make the chowder and stews, start desserts, and get ready for breakfast, which started at 7 a.m., but the locals would show up at 6:30 a.m. and let themselves in.” Chris recalls coming in to help before school, getting to know the patrons, and returning in the afternoon to have a snack and play cribbage. “Both myself and Billy were driving the dock boats from age six, continuing to work through high school, and treating Basin Point as our playground,” says Chris. “And through college we would return in the summer and work both the marina and the restaurant.”

As Jean grew older, Mimi took on the full responsibility of the restaurant. She’s now known by many as the heart and soul of the place. “If you have been to the Dolphin, then you definitely know who Mimi is, and you will more than likely get a big hug,” Chris says. “And if it’s your first time you will have the pleasure of meeting her when she stops by your table to check on you and she will make you feel like you’ve been coming in for years.” I can heartily confirm this statement from my personal experience.

When their grandparents passed away, Chris and Billy helped facilitate the purchase of the business from their aunt and uncle, who had a stake in it, and plotted a new course in order to keep the Dolphin alive for generations to come. Chris’s sister, Maureen Wilcox, as well as his wife, Maya Saxton, stepped in to work at the restaurant full-time.

Recently taking the helm in the kitchen is chef Joseph Whitmore, a Maine native who seamlessly adopted the traditional family recipes while updating with a few touches of his own. These include luscious, handmade shrimp tortellini served in a rich, buttery lemon sauce, boosted with crème fraîche and a hint of chervil. It brilliantly offsets the more traditional dishes such as the lobster stew, the recipe for which is kept under lock and key. The broth is not overly thick yet the flavor is intense, garnished with a liberal amount of sweet, fresh lobster meat and simply divine when enjoyed with warm blueberry muffins. “The stew is even better in the summer,” Mimi tells me, “when we start bringing in the soft shell lobsters.” An order of scallop fritters, like a nicely adapted version made with conch that I have enjoyed in the past, arrives accompanied by “Casco Bay Sauce,” which is, in essence, a remoulade. A cold, crisp bottle of Chateau Beaulieu rosé from Provence pairs beautifully with the entire menu. “Scallops and lobster caught right in front of the restaurant are really the star of the menu,” says Chris. “We like to focus on back-to-basics cooking with the best ingredients we can find.”

Although currently housed in a new structure built in 2011, there are holdovers and effects from the old restaurant all around, each of which tells its own story. Most recently the tavern area was redecorated to resemble the old Dolphin, with comfortable booths, vintage brass lights, and rich blue colors. The cocktail selection in the tavern is heavy on rum- driven staples like the painkiller and dark and stormy, while Maine breweries dominate the beer list. The restaurant no longer serves breakfast regularly, but has recently begun offering Sunday brunch because, as Chris explains to me, one of the most memorable elements of the original restaurant involved riding in by boat in the early morning to eat. I sample a few of the brunch dishes, including in-house smoked salmon on a salad with chopped egg and capers, as well as a particularly decadent crab cake benedict, with superbly poached eggs and Old Bay hollandaise.

“Clearly the business has grown over the years,“ Chris tells me, “but the values it was built on remain the same. Our family takes great pride in adapting over the years to accommodate the guests’ needs while remaining true to our roots and treating them as if they are an extension of their own home.” In short, the Dolphin Marina is the all-encompassing Maine experience, from beginning to end. The marina, the views, and the classic fare, as well as the more updated offerings, embody everything that living on the coast is known for. It is far more than just a restaurant with great food; it is an ever-evolving entity, an ongoing story of the Saxton family. Mimi sums it up best when she tells me, “We raised our kids at the Dolphin and it’s a continuous joy for me to see our grandchildren here, with bikes in the yard, enjoying their infectious laughter and curiosity, letting them help me with desserts and watching them grow up here. Our guests enjoy seeing both our family and business grow, and in the process they experience our life as well—because that is what the most important part of the Dolphin experience is: life.”