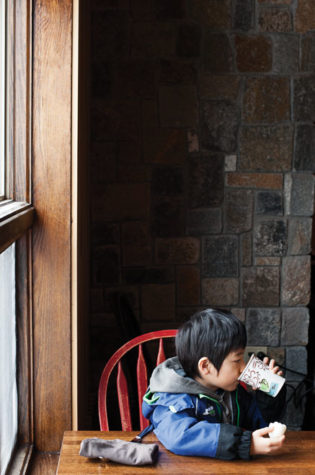 There are many sweet treats for young ones to enjoy on the mountain. 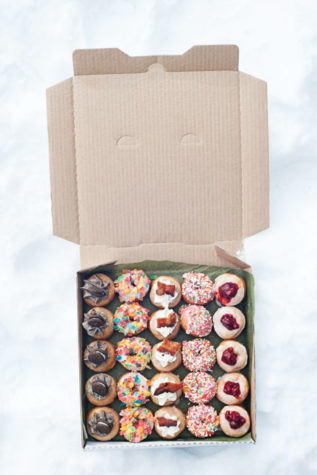 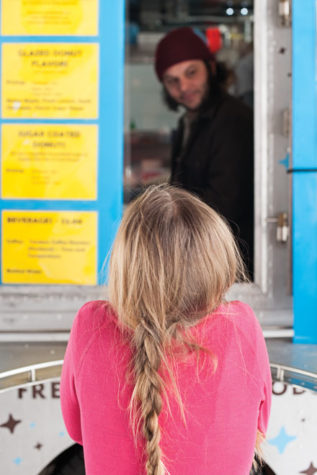 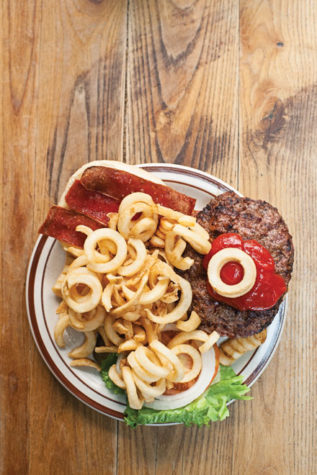 The Bag Burger. Just do it. 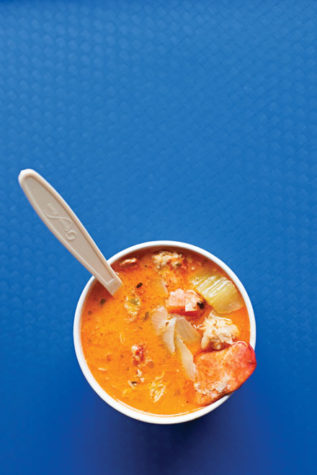 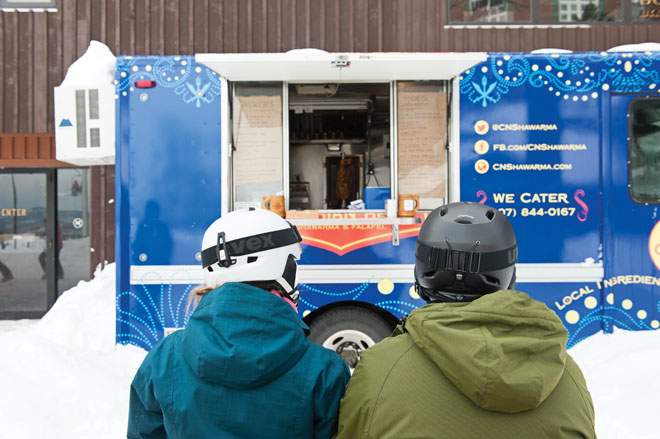 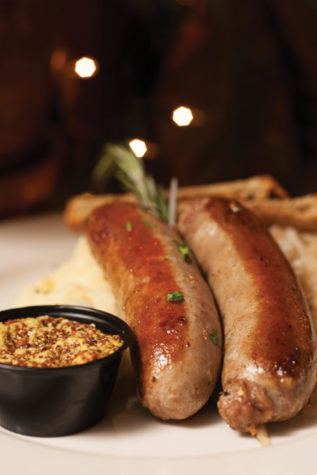 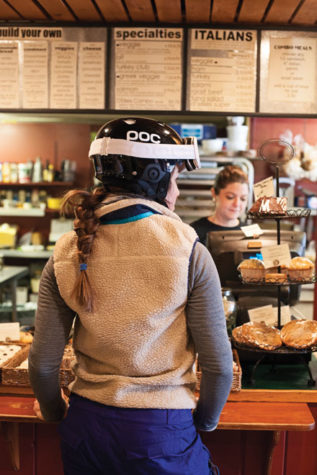 Ordering a breakfast sandwich at DEllies. 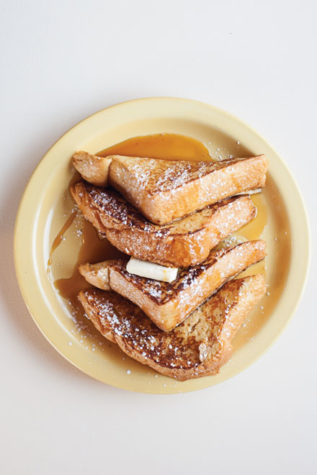 It’s early in the morning on a very cold winter day in the Carrabassett Valley. As I sit in the dining room at 45 North sipping hot black coffee in an effort to become lucid, I observe throngs of hotel guests lugging cumbersome ski equipment through the lobby and towards the mountain, in preparation for a day on the slopes. To be frank, the idea alone begins to tire me out, and I focus instead on ordering my breakfast and enjoying the ambience of a classic Maine farmhouse, albeit significantly more upscale.

Although the itinerary I have laid out for the day should motivate a breakfast that will fuel my body in a positive manner–steel-cut oatmeal with fresh fruit, perhaps–I opt instead for the buttery, flaky comfort of a warm croissant sandwich with folded egg, melted Swiss cheese, and sweet, savory breakfast sausage. Served on the side are golden, well-seasoned home fries accompanied by a ramekin of ketchup. I would say I chose very wisely.

I freshen up in the Sugarloaf Mountain Hotel, my base for the weekend, before taking a walk around the village in the brisk mountain air. One of the most noticeable changes in the dining landscape since my last visit to Sugarloaf is the addition of food trucks in the square, and I decide that lunch from CN Shawarma, which bills itself as “Arabian BBQ on Wheels,” is in order. As I investigate my options, I notice spit-roasted chicken, glistening from being basted in its own fat for hours, which is utilized in the shawarma. As tempting as that is, I can’t resist the siren song of the lamb kibbeh. Kibbeh is, essentially, an Arabic interpretation of the croquette, seasoned with a mélange of ingredients including garlic, cumin, cinnamon, and coriander before being deep fried and crusted with za’tar. It comes with pickled vegetables and a creamy, harissa-laced dipping sauce, and while I wait for the kibbeh to cool down to a temperature less than nuclear, I sample a bit of classic tabbouleh salad made with bulgur wheat, crunchy vegetables, and fresh herbs. The only thing missing is a cold bottle of arak with which to wash all of this goodness down, but I settle for a bottle of water because I still have much work to do.

I know I’ve got a bit of time to kill before joining the crowds for après ski, so I strike out for a scenic drive that brings me all the way to the Canadian border before I am forced to turn around. On the way, in the small town of Stratton, I pass the Coplin Dinner House, a beautiful fine-dining establishment set in an old farmhouse in what seems like the middle of nowhere. Once I’m back on the Sugarloaf access road, I follow the signs to the Shipyard Brewhaus, which is located somewhat off the beaten path at the Sugarloaf Inn.

I sample a few of the offerings on draught from Shipyard Brewing, located in Portland and one of the pioneers of the Maine microbrew movement. The food menu is extensive, ranging from traditional pub fare like buffalo wings and burgers to thoughtful composed dishes like jägerschnitzel, breaded veal cutlets with mushrooms, fresh herbs, and a delectable sherry and sweet cream sauce served over silky mashed potatoes. The Brewhaus is also famous for its steaks, and there is no cut of meat more impressive than their bone-in Tomahawk Veal Chop, perfectly charred on the outside and cooked to medium rare in the center.

While chatting with a few of the regulars about the state of affairs at the mountain, I fail to realize that the bar has become quite crowded all around me. I sneak out and make my way back to basecamp, where I have dinner plans at the Bag and Kettle with the owner, and a good friend of mine, Pat Mulligan. Although the Bag is known for quite a few things, including beers brewed on premise and soups made from scratch, it is their burger that has garnered an almost religious following in the Sugarloaf community. There is the basic Bag Burger, served with curly fries, but most veer towards the “designer” burger portion of the menu. There is the Gucci, loaded with pepperoni and cheese, as well as the Armani, slathered with chipotle pesto. I opt for the Dior, a hefty chargrilled patty on a toasted bun that has been doused in garlic and herb cheese sauce, some of which ends up on my curlies, which is just fine by me.

Sated, I request that all food be removed from my sight as Mulligan opens the cabinet doors to the whiskey shelf. Whether Scotch, Bourbon, or Irish be your pleasure, there is a broad range to choose from, including a personal favorite of mine, the Redbreast 15-year. At the Bag, a glass of whiskey is best enjoyed in a contemplative state with Steely Dan on the stereo, beneath the decorative green lamp at the corner of the bar. The light fixture is so locally famous that it has its own Facebook page.

One of the primary challenges when one’s assignment is to do nothing but eat and drink is to maintain a healthy appetite throughout the excursion, so when I hit D’Ellies Bakery in the morning I opt to keep it simple with a sausage, egg, and cheese breakfast sandwich. However, if you are seeking a solid base for a frigid day on the slopes, you would be remiss not to tear into a plate of homemade French toast with high-quality maple syrup and a choice of meats.

At this point I become aware that people have been observing me meandering about the campus for a solid day and a half now, with no signs of having any intention to ski. The only drawback to this behavior is that I am forced to miss out on Bullwinkle’s, a fantastic bar and restaurant accessible only by way of the mountain and for many the first stop to reward themselves after a day spent knee-deep in the powder.

One of my favorite options for lunch in the area is the outpost of Kittery-based Bob’s Clam Hut, a prime spot to get your fill of the most delicious fried clams around. When ordering, be advised that you will be confronted with two choices, Bob’s or Lillian’s style clams. I suggest you order both and see the difference for yourself between utilizing an egg and milk wash before frying (Lillian) or just going straight into the batter (Bob). I am always sure to request extra sides of housemade tartar sauce because, well, that’s really the only way to eat fried clams.

Later in the day, during après ski, I wade amongst the crowds of revelers at the Widowmaker Lounge, until I find a perch from which to order a platter of outstanding nachos and a few Twisted Teas. Of course, if you were looking for a full dinner, the Widowmaker features superlative chicken wings and a steak sandwich dubbed the Igniter, augmented to the level of Elysian with the addition of Naughty Yellow Cheese Sauce.

As the sun dips low on my final day, I make my way back down the access road to the Rack, where a diverse menu is anchored by classic American barbecue, most notably the pork ribs and Avalanche Brisket, all meltingly tender from a long, slow cook in the smoker. Moving into late night, the industry crew from the mountain’s restaurants begins filing in, looking to blow off steam and enjoy well-deserved time off the grid.

In the morning, I make one last stop at the Urban Sugar Mobile Cafe for a box of unique miniature donuts. Of the many options, I would have to say the Cap’n Crunch coating topped with mini cereal marshmallows makes my long drive considerably more enjoyable. This and the many other additions to Sugarloaf’s dining options show a continued effort to make the resort a draw for so much more than just skiing and golf, as should be the case in one of Maine’s most scenic locales.