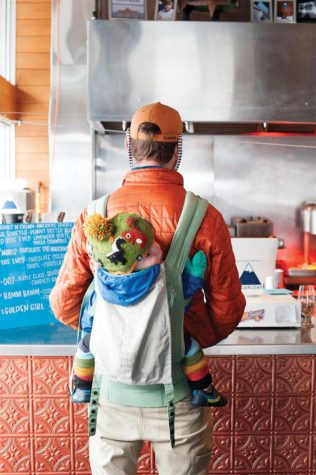 Everyone lines up for Urban Sugar Donuts. 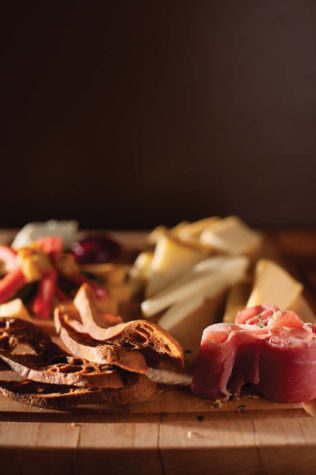 At 45 North in the Sugarloaf Mountain Hotel, a meat and cheese board offers sustenance after skiing. 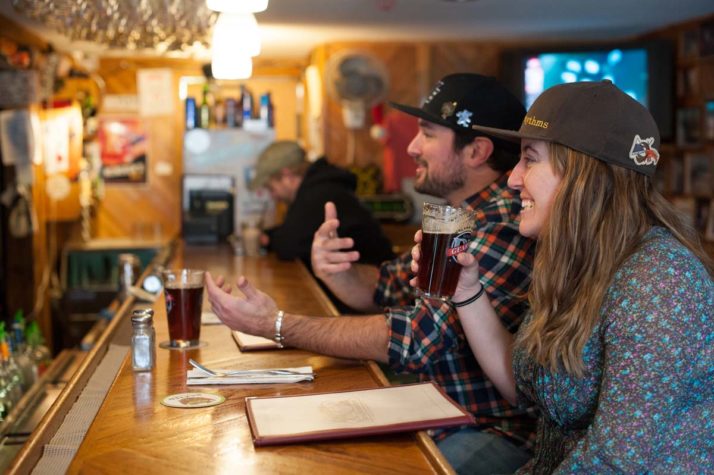 A seat at the bar and a beer at Gepetto’s, a long-time Sugarloaf favorite.

As I walk out of the lodge with a pink box full of Urban Sugar doughnuts, I hear my name called. I look around, and over by the skis piled up on the rack, I see interior designer Leandra Fremont-Smith waving at me. I have been at Sugarloaf 20 minutes, and it’s no surprise that I have already run into someone I know. Sugarloaf is not the place to get away from it all. It’s a place to catch up with friends, for skiing and socializing. Every Friday afternoon in the winter, there’s a line of cars pointed northwest from southern Maine, sporting the familiar blue triangle sticker and filled with piles of gear for busy outdoor weekends. As the cars wind their way up Route 27 towards Sugarloaf, headlights flash like a string of Christmas lights. And just like Christmas, Sugarloafers look forward to this seasonal ritual every year.

It’s a January holiday weekend as I travel the same road, eagerly anticipating not only skiing, but some good eating as well. It’s the start of the annual Sugarloaf Restaurant Week, celebrating the food and people who work in hospitality at the resort, with special menus and discounts at some of the area’s favorite restaurants. I’m especially looking forward to the tasting event, when many of those restaurants will offer samples of their culinary creations at the Kickoff Celebration. I check into the Sugarloaf Mountain Hotel, just steps from the Base Lodge, where the event is being held.

Outside, the sun is sinking fast as skiers get in last runs. Those who are done for the day gather around the big fire pit at the base, resting tired legs. Inside, chefs and their assistants are setting up induction burners and pans, unloading boxes and trays, and preparing for the hungry guests. I catch up with the team from 45 North, located in the hotel. They’re setting out small plates of short ribs, braised in Shipyard Brewing Company’s Monkey Fist IPA and served on a cheddar puff. It’s a hearty and delicious bite, a tasty preview of the fare cooked at the restaurant. The Shipyard Brew Haus at the Sugarloaf Inn has shrimp and grits, and Hugs Italian Cuisine is serving beef and sausage meatballs in marinara sauce. Heidi Donovan and Tony Rossi, owners of the Coplin Dinner House in nearby Stratton, are setting out spoonfuls of pan-seared tuna with seaweed salad, cucumber, and wasabi aioli. They also have tiny chocolate pots de crème with toasted almonds, sure to be a hit for anyone in need of a sweet fix. I check in with the guys from the wildly popular hangout, the Rack, who are excited about the custom-made smoker they installed last fall. They offer me a taste of smoked salmon with mango chutney on crostini, showing off their new smoking skills.

The room is starting to fill. Some look like they came right from the slopes, still lugging ski boots, and many others are dressed in the unofficial Maine uniform of L.L.Bean boots and plaid shirts. The chefs stand out in their white jackets as they chat with guests and hand out food. Most everyone seems familiar with each other, as if they just hopped off the lift together, and the atmosphere is energetic and friendly. Afterwards, we wander upstairs to the Widowmaker Lounge to catch the second half of the football game on one of the bar’s many big-screen televisions. It’s a win for the Patriots, and we toast the victory with beer and nachos.

Instead of skiing in the morning, I opt for snowshoeing on the trails around the Sugarloaf Outdoor Center, and it doesn’t take long to work up an appetite for lunch. Gepetto’s has been a fixture at Sugarloaf for decades, drawing in skiers who are looking for a substantial lunch or a convivial post- ski stop. The glass greenhouse, with its welcoming cast-iron stove, affords a good view of the slopes. Guests at the bar could be sipping on one of the specialty cocktails that Gepetto’s is known for, such as the Winter Solstice, with Cointreau, muddled lemon, mint, and soda. Or savoring a big glass of D.L. Geary Brewing Company’s Out of Bounds IPA, created exclusively for Gepetto’s by the brewery. An order of the spicy, house-made potato chips would be just the thing to go with that drink. The original owners also owned

a tuna boat, and the seared tuna remains a popular staple on the menu. The preparation may vary from year to year, but it’s always fresh, light, and flavorful. The lemon wasabi aioli is the perfect complement to the fish. Creamy tomato bisque with garlic bread or cheeseburger soup make a quick and warming lunch. Last year, Gepetto’s created the Sidebar, a small lounge across the hall from the restaurant’s entrance. It’s a comfortable, cozy space offering oysters, meat and cheese boards, and fondue.

A newer addition to Sugarloaf ’s food scene, which I visited earlier in the day, is Urban Sugar Donuts, tucked into a tiny corner of the Base Lodge. It was originally a mobile food truck, but owner Kevin Sandes put down roots here two years ago in response to the overwhelming demand for his fried-to-order, bite-sized treats. Happy kids can barely contain themselves as they wait for their order to be ready. There are just three people behind the counter, frying, dipping, and boxing up fresh donuts in flavors like maple- glazed with candied bacon, cookies and cream topped with tiny Oreos, and s’mores. It seems that no one can resist the siren call of Urban Sugar in the afternoon, as the line of doughnut-lovers starts to lengthen.

Photographer Nicole Wolf and I hit up the Rack before dinner, grabbing a seat at the bar while tonight’s band starts to set up. There are rotating tap lines of local beers to choose from, and as we make our selection, the mouthwatering aroma of barbecued meat drifts into the bar area. The Rack’s Restaurant Week menu includes a sugar maple pork chop from the new smoker. We’d like to stay and give it a try, but we have reservations elsewhere tonight.

It’s back up the Access Road for us, as we head to 45 North, the fine-dining restaurant inside the Sugarloaf Mountain Hotel. The room has a rustic, farmhouse feel to it, with lots of worn wood and seating in a variety of styles and colors for casual charm. The bar is wrapped in galvanized metal and dramatic hanging lights are fashioned from nests of twigs. It’s the perfect spot for a Maine blueberry daiquiri or a hot buttered rum, both specialties of the house.

With a special menu that looks as tempting as the cocktails, 45 North is participating in Restaurant Week with a $50 dinner for two that includes an appetizer to share and choice of entree. Chef Alex LaRochelle cooks seasonally, using as much local produce and meats as possible. His menu changes every few weeks, but the 45N Burger is a staple, and it’s available as a Restaurant Week option. With local, grass-fed ground beef coated in a Carrabassett Coffee rub, maple-candied bacon, and onion jam, it’s a perennial favorite. A friend had raved about the fried cauliflower appetizer, and I agree with her when I taste it. The crispy florets are dressed with lemon and capers, hitting all the right salty, tangy notes. For those who have worked up an appetite on the Snowfields or terrain park, hearty meat and potato dishes are always on the menu, including an enormous steak served on a wooden cutting board with roasted fingerling potatoes.

The restaurant gets a delivery from the Skowhegan farmers’ market each Thursday, providing a good opportunity to create some new dishes for the weekly Thursday Pub Night. There are dinner specials that make the best use of seasonal ingredients, as well
as wine flights designed to match the dishes. More salads have been added to the menu, and I’m impressed to hear that the delicious maple vinaigrette on the roasted apple salad uses maple syrup from Sugarloaf ’s own Sugar Shack. Before we say good night, the chef appears with freshly baked chocolate chip and molasses cookies, a sweet ending.

When we awake the next morning, the temperature has dropped below zero and the blustery wind has forced the lifts to temporarily shut down. 45 North has been transformed into a breakfast buffet, and little kids still in pajamas are piling bacon on their plates while their parents linger over second cups of coffee. It’s the kind of day that makes your face hurt just to be outside, and no one is in a hurry to get moving. That’s OK. Dedicated Sugarloafers know this sometimes happens. A cup of hot chocolate from Java Joe’s and maybe an Urban Sugar doughnut makes the wait bearable. 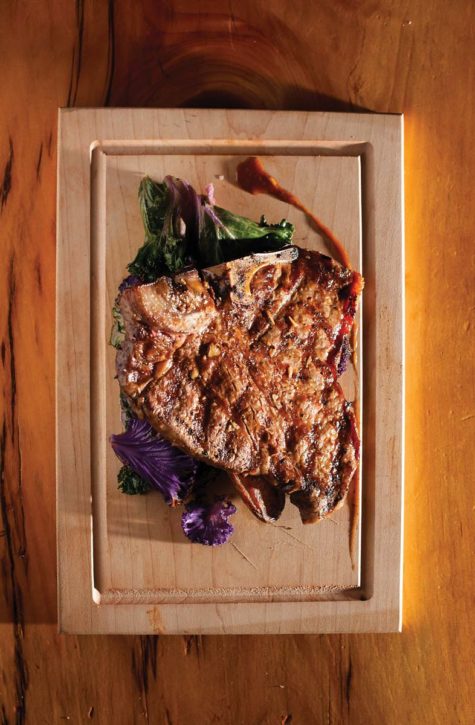 A big steak for big appetites at 45 North. 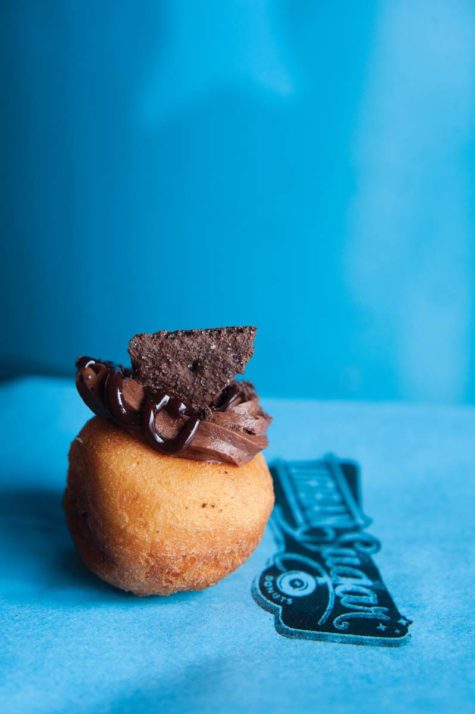 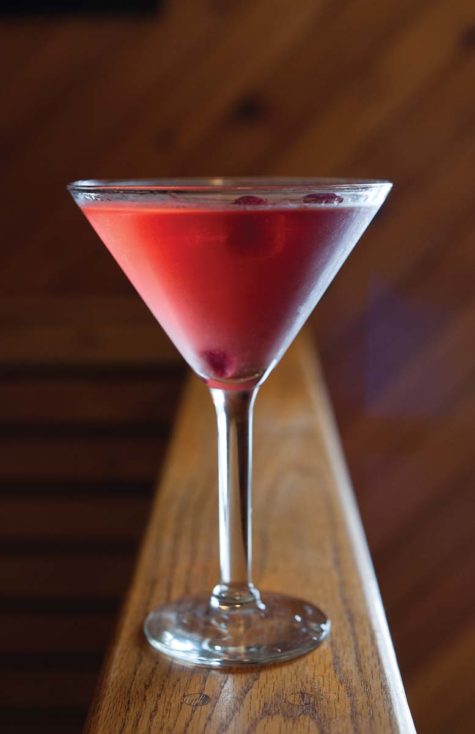