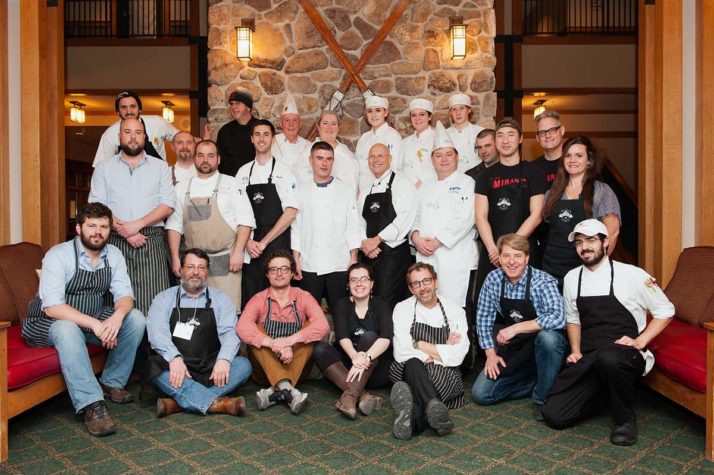 Participating chefs gather for a group portrait in the lobby of the Jordan Hotel. Maine chefs at the Sunday River Chef Summit 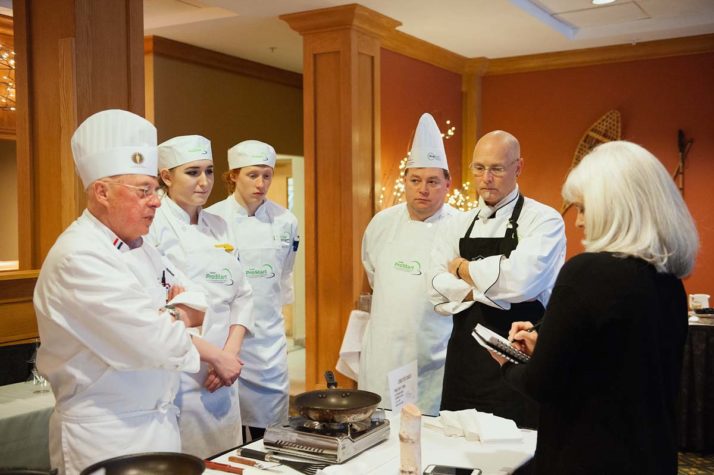 Learning more about the ProStart program from the Northern Penobscot Tech team. Maine chefs at the Suday River Chef summit 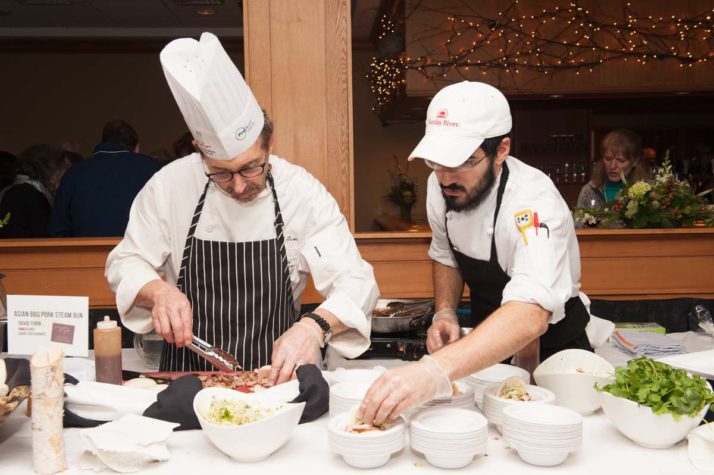 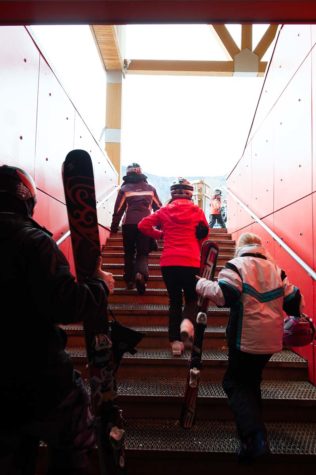 Skiers head out for another day on the slopes of Sunday River. Maine Magazine | Skiers at Sunday River 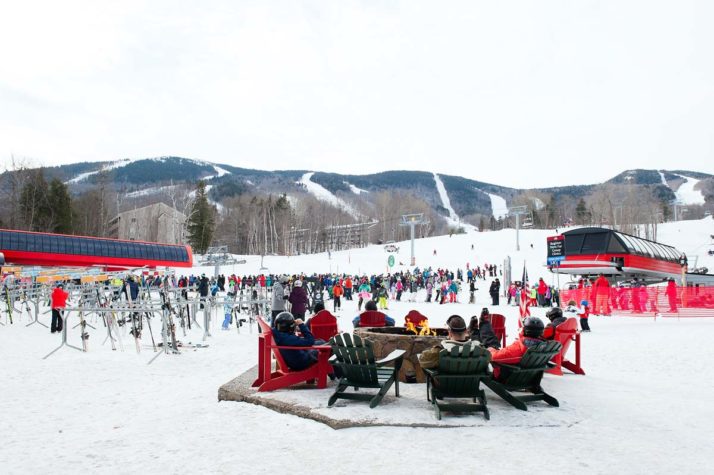 Come for the food. Stay for the skiing.

Winters can be a challenge in Maine. When the end of holiday festivities leaves us facing short days and the threat of snowstorms, we crave ways to embrace the season. We seek pursuits to make the most of the cold months, both indoors and out. Skiing is one of them.

Dana Bullen, president of Sunday River, is working to ensure that outstanding food goes along with outdoor enjoyment. “People have always come to Sunday River expecting great skiing. Now they can expect more of a whole experience,” he says. “We’re starting to understand what people are looking for. The skiing culture in the U.S. is getting more interested in food as part of it. We’re keeping up with expectations.” The resort is rolling out new ideas for on-mountain dining and new restaurants in the area are opening, attracting more visitors and thrilling those who have been coming to Sunday River for years. But it’s special culinary events that have caught Bullen’s imagination, and he’s making them happen with the help of an old friend, Rory Strunk.

The two have known each other since high- school days in Farmington. Strunk is the founder of O’Maine Studios in Portland, a media event and production company that focuses on the food industry. He has years of experience creating and marketing events. “Rory and I talk an awful lot,” Bullen tells me, “so it’s not even clear who first came up with the idea, but we knew we wanted to do it together.” What Bullen had in mind was a high-level culinary event that would have the restaurant industry talking about Sunday River and visitors to the resort talking about the food there. Strunk, with typical enthusiasm, had something even bigger in mind. “We started sharing ideas, and the event just took on a life of its own,” he says. With a window of only eight weeks to put it together, the first Sunday River Chef Summit was born.

One of Strunk’s first phone calls was to Arlin Smith, co-owner of Hugo’s, Eventide, and the Honey Paw in Portland. At first Smith was skeptical about getting chefs out of their kitchens for a weekend event. But his enthusiasm was strengthened by the lure of the slopes, along with the opportunity to rub elbows with fellow industry members in a different kind of setting. And that’s when the other part of the event started to gel. Strunk identified movers and shakers in Maine’s food world—business owners, producers, distributors, chefs, sales and marketing people—and invited them to talk about what they know best.

Over 100 people came to hear an impressive roster of industry professionals. Among them, Briana Volk of Portland Hunt and Alpine Club brought her advertising experience to a lively panel on branding. Lisa Webster of North Star Sheep Farm, who was an integral part of planning the event, discussed marketing Maine food. Luke Holden of Luke’s Lobster was also there to offer his perspective. “Food without a story is just food,” he explained. “Consumers want to know where their food is coming from. Over the past decade we have seen chefs become celebrities, and I bet as an industry we start to celebrate the growers, farmers, and fishermen who create and harvest our food even more.” Each discussion provoked conversations extending beyond the panels.

The Friday industry talks were all business; the Saturday tasting event, open to the public, showcased Maine food and restaurants. Strunk and Bullen worked with Sysco of Northern New England, the food distributor, as a Chef Summit sponsor. “Sysco has a responsibility to help the Maine food industry,” says vice president of sales Bill Terry. “We bring food from farm to table, keeping the integrity intact.” Sysco supplied the 12 participating chefs with some of the ingredients for the tasting event. The chefs’ task was to create an innovative, delicious dish using the local ingredients and offer it to guests who had purchased tickets for the evening.

By early afternoon, chefs and their crews were hauling boxes filled with produce, meat, fish, portable burners, and cookware to the Jordan Hotel dining room. There was a warm sense of camaraderie in the room, with greetings called out to each new arrival. In one corner, Josh Berry of Union worked diligently with his sous chef, Matt Duley. “We were given the opportunity to use Oakhurst cream,” he says, showing me the cauliflower soup they had created. As is Berry’s style, he amped up the velvety soup with inventive ingredients, including prosciutto powder, rosemary ash, and turmeric oil. Next to the Union team , chef Matt Ginn of Evo Kitchen and Bar was working on shakshuka, a traditional Israeli dish. He cooked Backyard Farms tomatoes into a thick, spicy stew that would later be topped with a poached egg and served with freshly baked pita bread.

David Turin of the David’s restaurants was prepping his dish after spending most of the day on the slopes. “When I heard about this event,” he says, “I immediately said yes.” He worked efficiently, stuffing Asian barbecued pork into steamed buns while bantering with a group of instructors and students from ProStart, a vocational culinary program for high-schoolers. Turin has been involved with ProStart for years, as a mentor and competition coach. Nikkol Mulligan, a senior from Northern Penobscot Tech, who already had an acceptance letter from the Culinary Institute of America, was thrilled to be cooking at the event. “It’s a huge opportunity to meet chefs,” she says. “I’m hoping to get an internship.” Along with lobster cakes with sweet corn puree and tomato compote , Mulligan and the team presented a heavenly limoncello ice cream parfait with white chocolate and a tuile cookie, to universal acclaim.

Meanwhile, in the lobby of the Jordan Hotel, guests were returning after a day of skiing, tired, happy, and hungry. When the doors to the dining room opened, a first stop for many was the bar. Staff from the Black Point Inn in Prouts Neck mixed an original cocktail called O Tannenbaum. Michael Honig of Honig Vineyard and Winery poured glasses of his family’s signature sauvignon blanc. “Maine was one of the first markets I visited,” he tells me, “and I love to come back. When Rory and Arlin called, I was in.”

The mood was festive as guests sipped, tasted, and tested offerings. Chef Kerry Altiero of Cafe Miranda seared sea scallops to serve with five-spice coconut slaw, while across the room Andrew Taylor of the Honey Paw dished out spicy lamb khao soi with fried noodles. He’s a big fan of the lamb from North Star Farm, and the complex flavors of his dish made the most of the tender meat. Guests compared dishes with each other, sending friends off to grab another bite of something particularly delicious.

I caught up with Bullen not long after the weekend. He was thrilled with how the event had gone. “I had a ball,” he says. “There was a great mix of people who appreciate good food. This event showed what Sunday River can do. I can definitely see this continuing.” Strunk agrees, and is already lining up participants for the 2017 Chef Summit. “We’ll be expanding the event to three days, getting more chefs involved, and because January 28 is National Blueberry Pancake Day, there’ll be a big breakfast event, too,” he tells me.

As this year’s summit came to a close, Strunk gathered the chefs for a group photo in front of the lobby’s massive stone fireplace. There was a sense of accomplishment for a job well done and their conversation was decidedly more relaxed. Plans were made to extend the good time. There was a band playing down at the Matterhorn. For this group, the night was still young and Sunday River was ready. 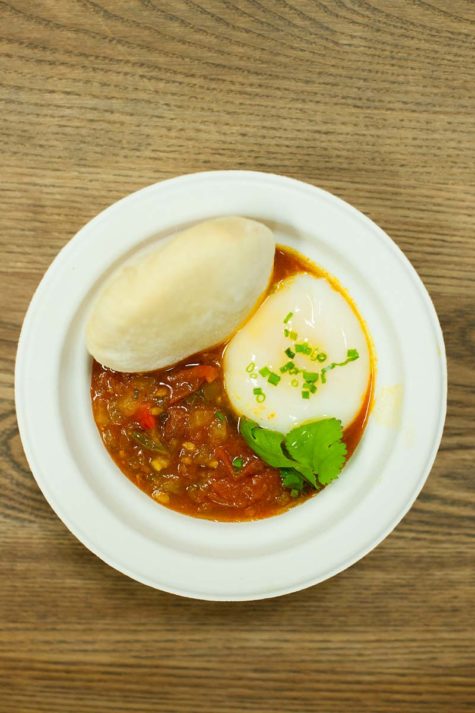 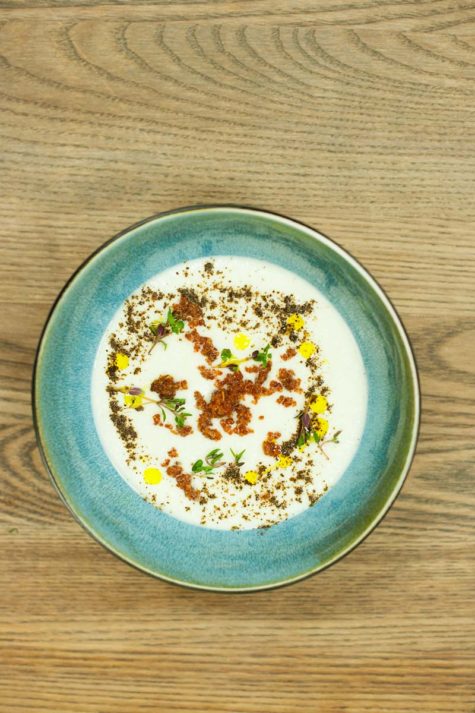 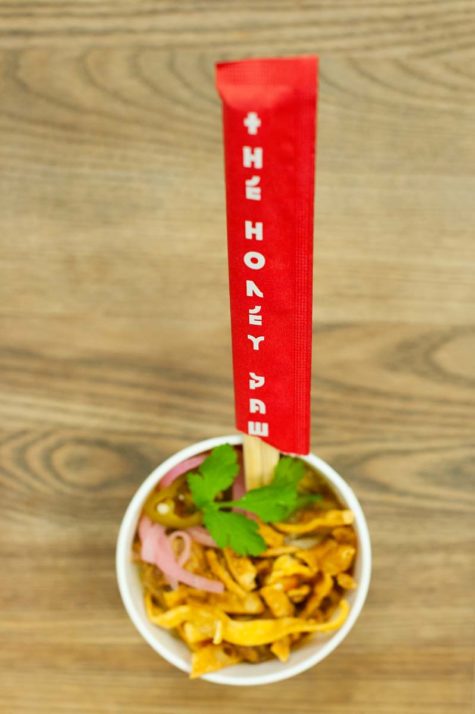 A bowl of smoky lamb khao soi from the Honey Paw.