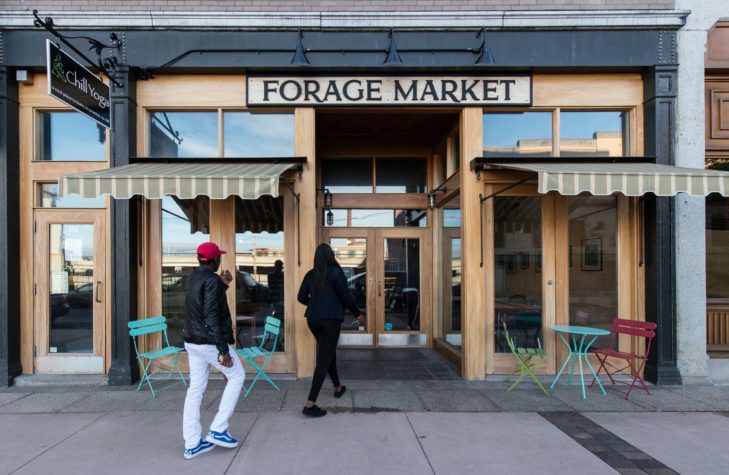 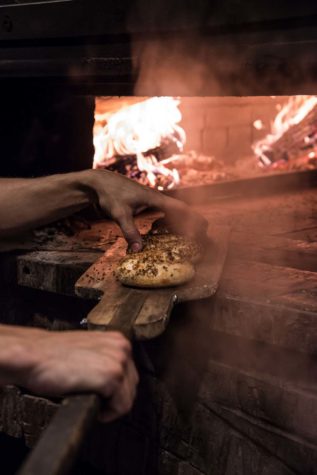 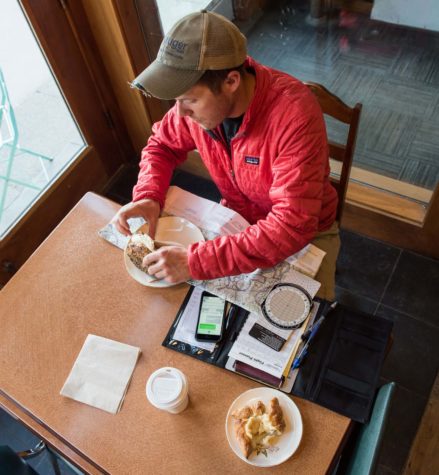 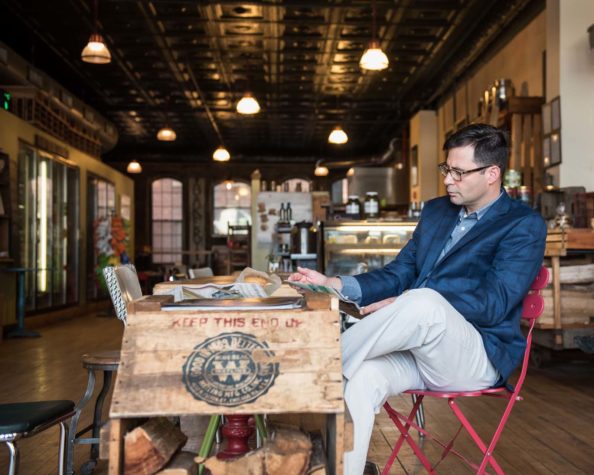 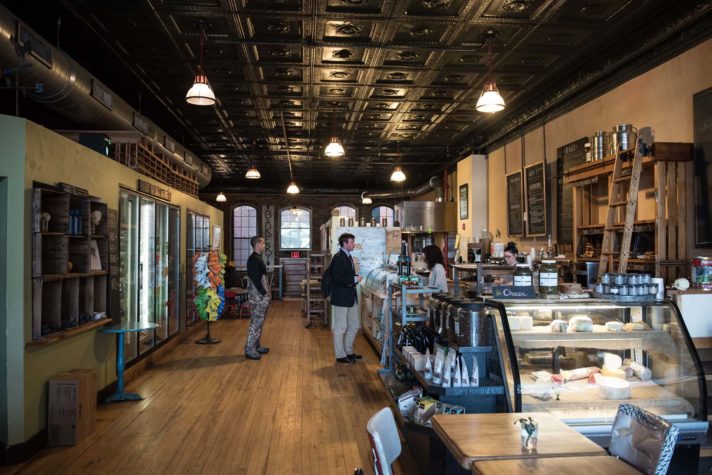 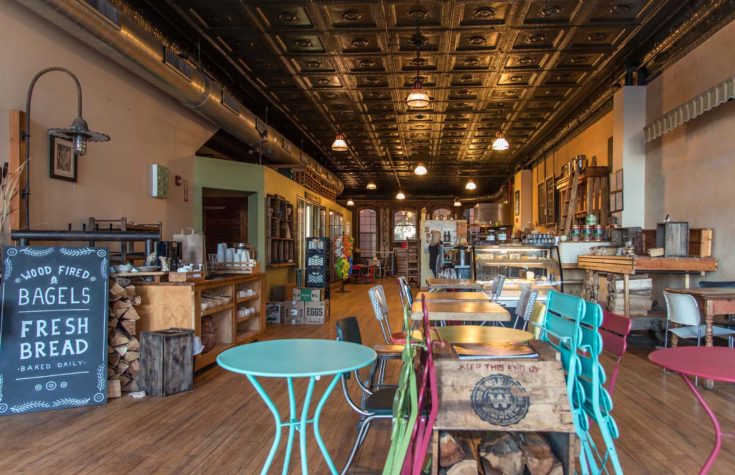 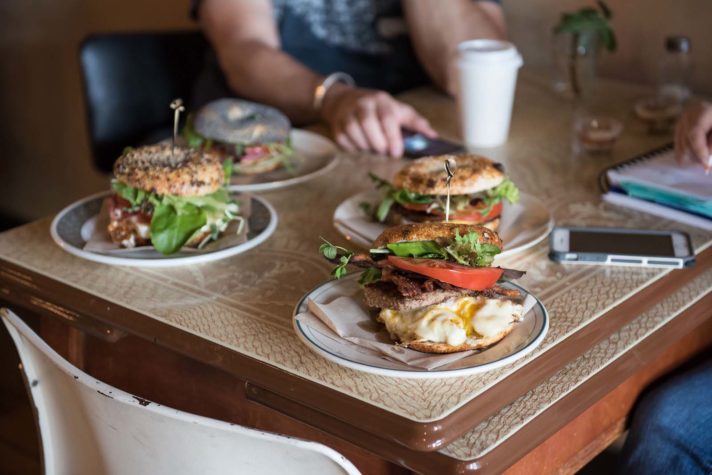 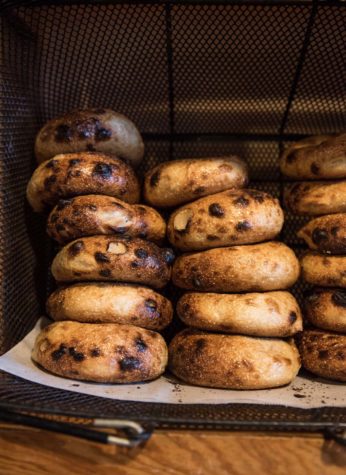 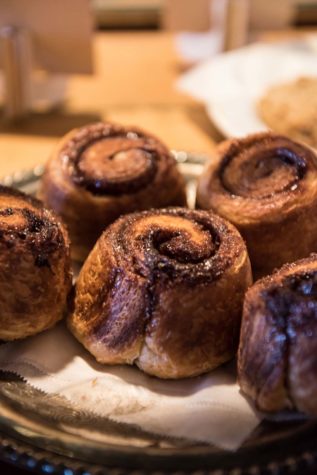 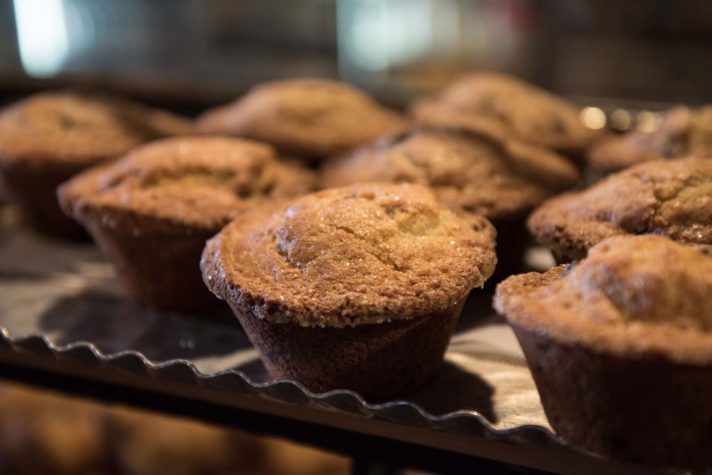 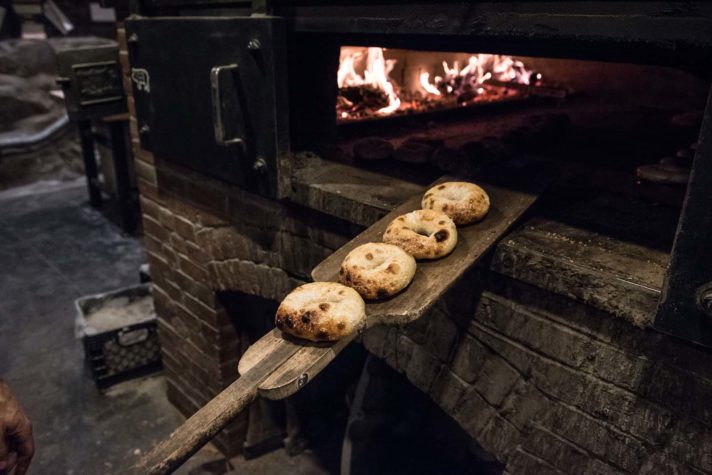 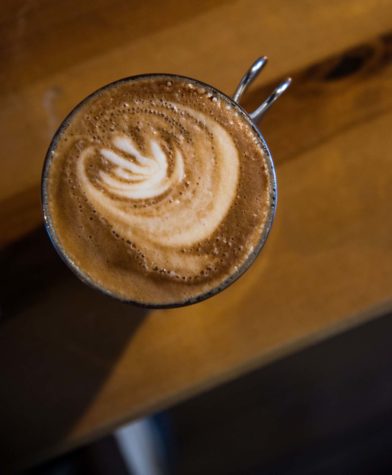 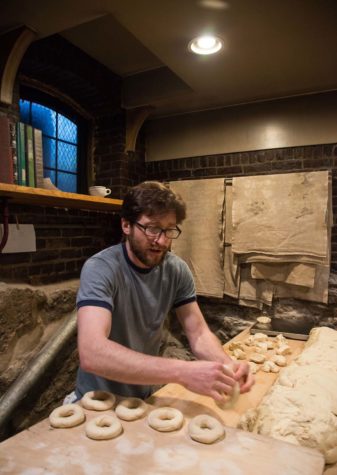 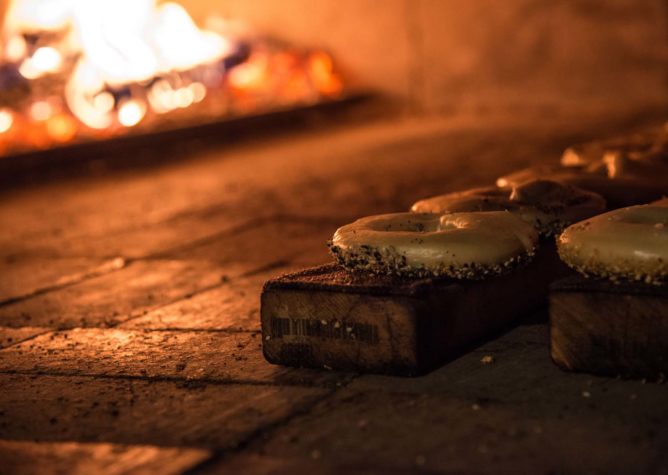 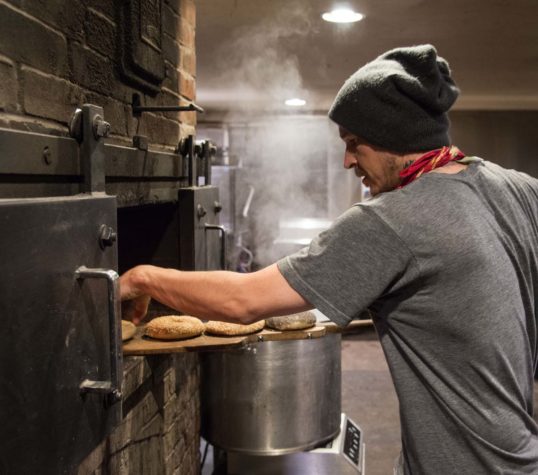 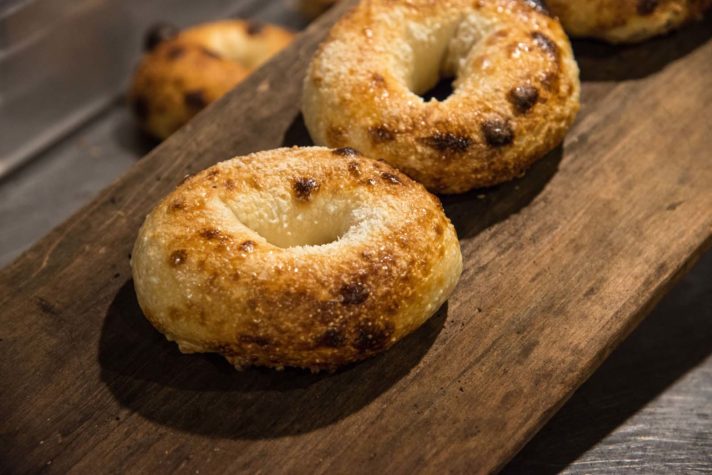 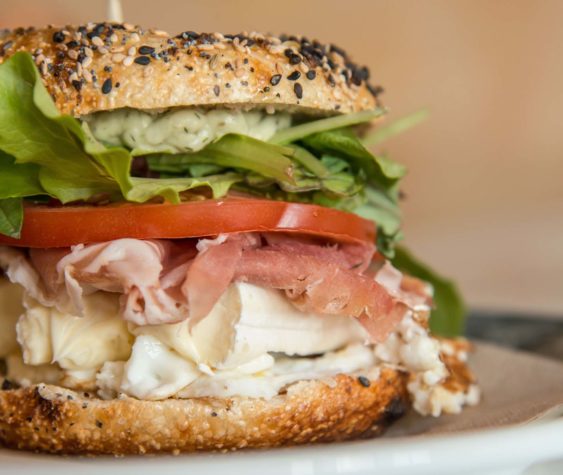 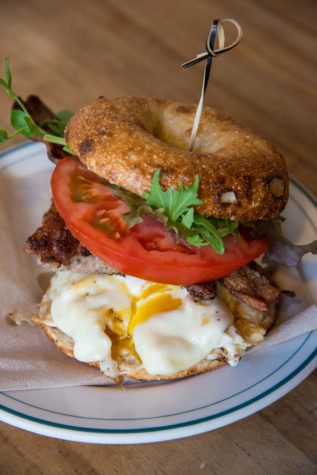 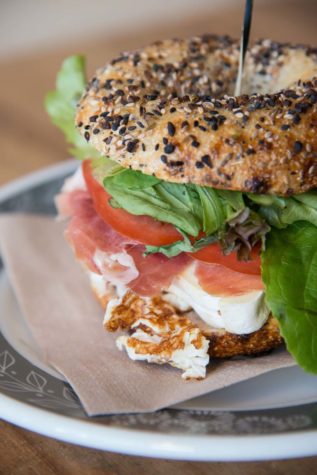 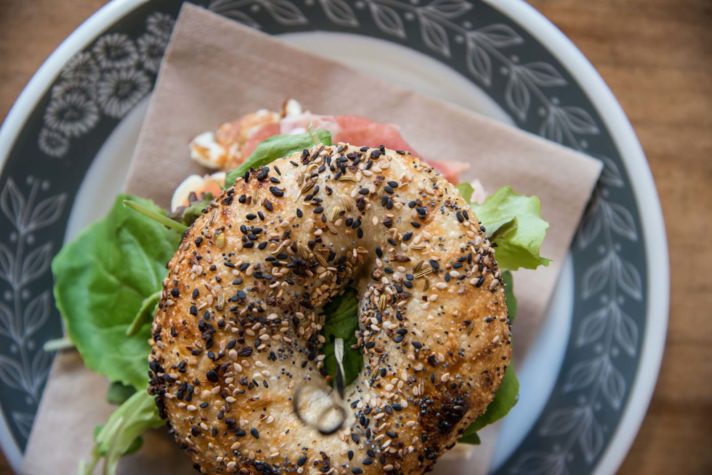 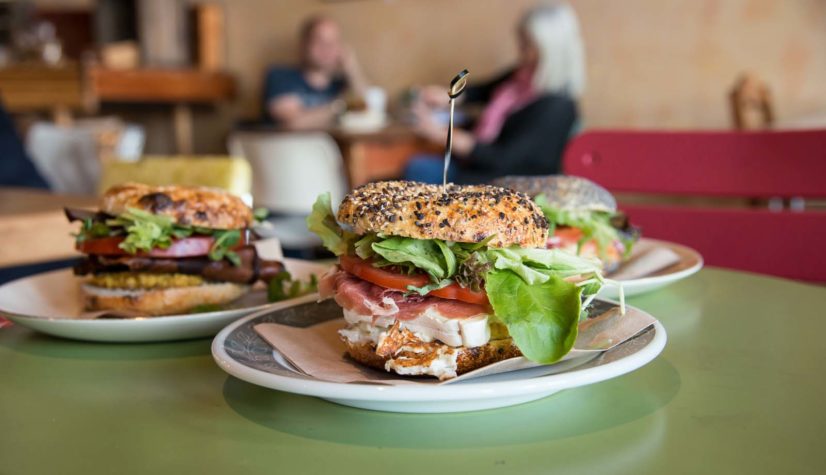 I am not a morning person, so when Forage Market’s owner, Allen Smith, invited me to watch bagels being made at 6:30 a.m., I hesitated. But one of life’s culinary joys is a bagel hot out of the oven, so I agreed. Upon arrival, Smith offers me a latte from the gleaming Italian espresso machine behind the counter. I eye the croissants and muffins in the glass case, but I’m here to watch the bakers in action. “Let’s go downstairs,” Allen says. “We put the bakery in the basement, hoping people would come down and watch the process, hang out, and chat with the bakers.” Photographer Dave Dostie and I follow Smith to the basement, latte in hand. The bakers, Gerry Walsh and Jason Jalbert, have been here since 4 a.m. Walsh, who Jalbert calls “the undisputed king of bagel rolling,” is doing what he does best. He rhythmically cuts pieces of dough from the 42-pound slab, rolls it into long ropes, and cuts and weighs each piece. Walsh will then quickly form the smaller pieces into circles and lay them on a flour-dusted wooden board. Walsh is, quite literally, an artist, midway through a program at an art school in Vermont. He brings an artist’s sensibility to the act of baking, telling me, “I’m not a data person like a lot of bakers. I base my knowledge on the touch and feel of the dough. It’s the process of using all my senses.” Jalbert is the opener, coming in to start the wood-fired oven, turn on the proof box for pastries, and put on a huge vat of water to boil. He boils the bagels and then dusts them with a topping of sesame or poppy seeds, sea salt, or “everything” blend, before placing them in the oven. Eight to ten minutes later, they’re done. “I’m looking for a thin, crisp crust,” Jalbert says, as he hands a bagel to me. It’s still hot, chewy, with a slight sourdough tang. The crust is indeed thin and crisp, and Jalbert nods approvingly. Before heading back upstairs, he and Walsh give me an insider tip: “Ask for the bagel grilled. That’s the bakers’ way.”

“There are a lot of exceptional bread bakers in Maine,” Smith says, “so I thought bagels would stand out. We had to be savvy about it and decide to concentrate on what we’re really good at.” Outstanding bagels are the foundation for excellent sandwiches, and Forage’s are first-rate. The Hair of the Dog, overstuffed with local bacon and sausage, egg, and cheese, with a smear of house-made aioli, is just the thing for a Bates College student who may have overindulged the night before. There’s a vegan version, too, called the “Soy Veh,” which includes scrambled tofu topped with “s’meat,” a soy meat substitute made in-house. “We’re well known for our vegan and vegetarian options,” says Smith, “and this sandwich has a loyal following.”

My favorite is an untraditional take on the traditional bagel and lox. The Upstream includes a fried egg, pickled red onions, tomatoes, and greens, plus caper dill aioli with the smoked fish. “I’ve always loved bagels,” Smith says. “I have memories of my parents taking me to a Jewish deli and the hot bagels coming out of the oven.” As he and I taste the various sandwiches, he continues, “People think of us a bagel place now, but we usually run out of them by the afternoon. Then we urge them to order sandwiches on our homemade bread, either country French or seven-grain sandwich bread.”

Smith has been interested in baking, hearth breads in particular, for more than 20 years.
He baked at home as a hobby and dreamt of having a bakery for a long time. Smith has recently returned from a trip to France, his first visit to the country. He and general manager Laura Doucet went there in search of an oven. “Revolving deck ovens have a long history in Spain, but to bake bagels in the direct-fired oven we were interested in, we were sent to a bakery in Huelgoat, France, where one of these Spanish built ovens is currently being used,” Smith says. “While we waited for our bagels to age, we spent a day helping the bakery owners bake for a farmers’ market.” Smith hopes to bring the oven to a new Forage Market in Portland. He’s currently looking for space in the city to bake bagels and bread and offer sandwiches.

When Forage opened five years ago, it was more of a market than cafe. “But people really connected with the food we prepare, so that became our focus,” Smith says. “The Bates community really sustained us at first, but now we have a strong local base.” This morning, people of all ages have been stopping in at Forage—those on their way to work in one of the nearby mill buildings, kids with backpacks on their way to school, and college students hanging out with laptops and coffee. They’re here for their morning bagel or muffin, a sandwich for later, or coffee. But they’re also here for the community, and Smith is as proud of that as he is of the bagels. “Our biggest contribution to the community is the way we bring different parts of it together,” he says. “People bond over bread.” 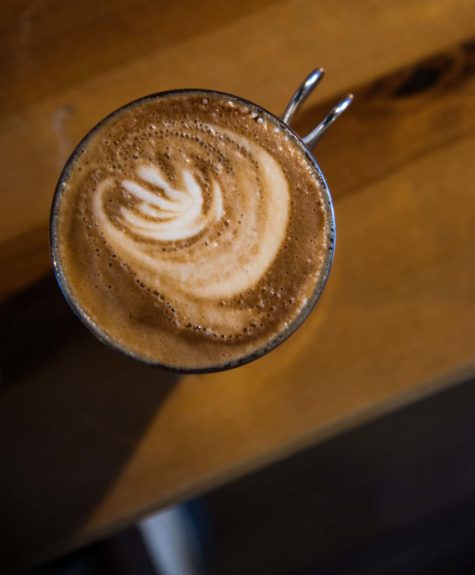 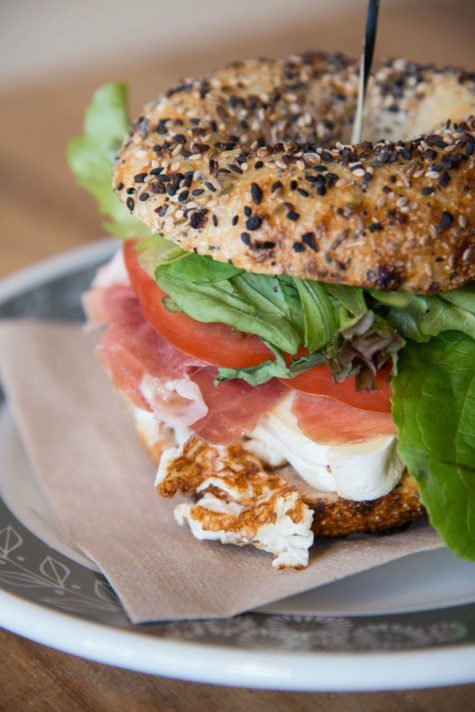