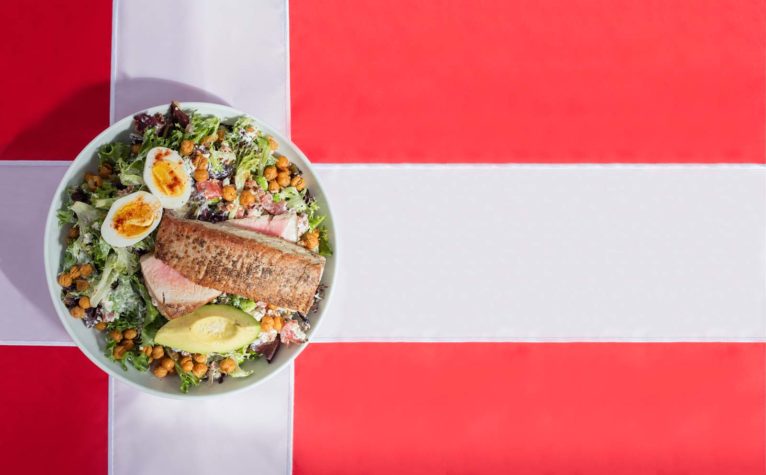 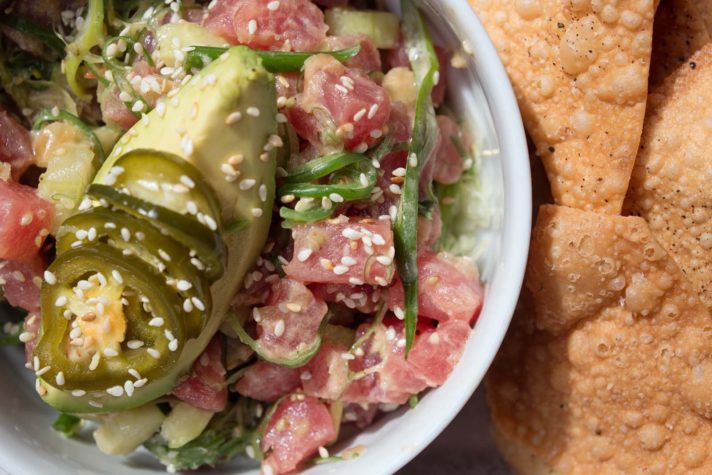 The tuna poke bowl is a protein feast with sushi-grade raw tuna, avocado, seaweed salad, and pickled jalapeños, all bathed in miso dressing. 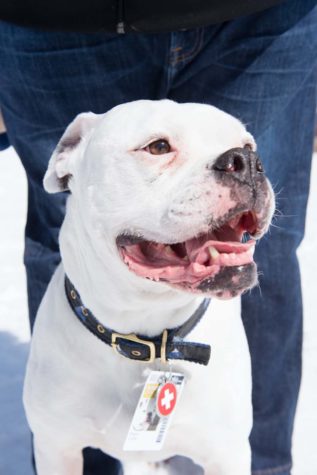 Loring’s bulldog, Mugsy, sports a Sugarloaf collar, a Hunker Down tag, and his own ski pass. 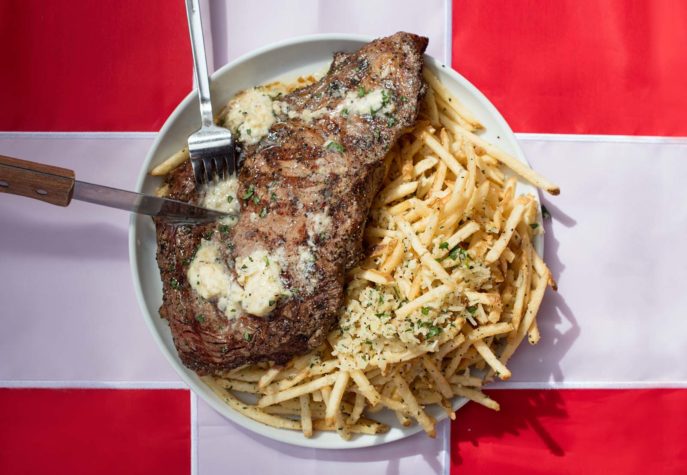 After a long day on the mountain, a hearty plate of steak frites—garlic-rubbed rib eye with herb butter and crispy shoestring fries—hits the spot. 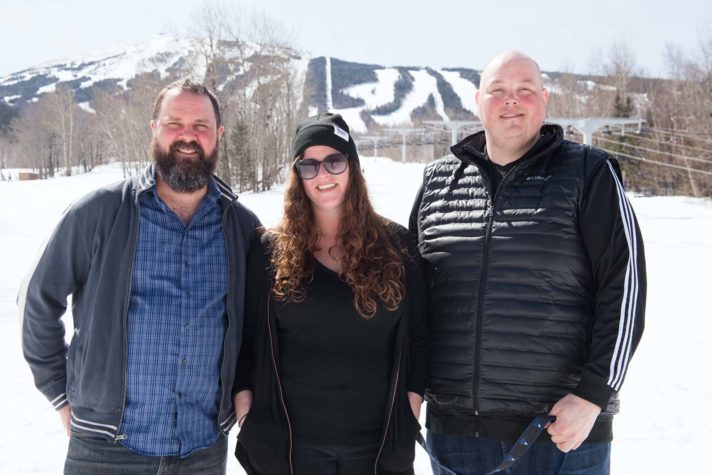 With a menu of fun, “ski-friendly” food, Sugarloaf’s newest restaurant drops in for its second season

Jason Lorning doesn’t do a lot of sitting still. In the past eight years, the Culinary Institute of America–trained chef and Yarmouth native has opened seven restaurants in Maine. Each has been a different concept, but they share the focus on fun, flavorful food that Loring established at his first venture, Nosh Kitchen Bar in Portland, which is famous for its over-the-top burgers and bacon-dusted french fries. Two of those restaurants, Rhum, a tiki bar, and Big J’s Chicken Shack—both in Portland—closed earlier this year, but Loring and business partner Michael Fraser were already at work on their next ventures. In November 2017, Loring and Fraser—who also owns Bramhall and Roma in Portland’s West End—opened Hunker Down at Sugarloaf. Early this summer, they launched Hunker Down 302 in Erik’s Church, a country-music venue in Windham.

The Sugarloaf location of Hunker Down, open late November to mid-April, occupies the window-wrapped spot where Gepetto’s served up big steaks, seafood, and specialty cocktails for three decades. The decor hasn’t changed dramatically—Sugarloafers will recognize the wood-paneled walls—but it has been freshened up. Downstairs, the arcade room has been painted, while on the main floor the restaurant’s red-and-white logo is splashed on windows, pint glasses, staff shirts, and the mug-club beer steins hanging above the bar (it’s called the Mugsy Club, named for Loring’s beloved bulldog). A separate lounge area called the Sidebar will get a facelift for this season, thanks to a new partnership with Orono Brewing Company. “Their graffiti artists are going to decorate the walls,” says Fraser, adding that the Sidebar will also have a separate menu of Mexican food.

The menu is also being freshened up for Hunker Down’s second season, including what Loring calls “ski-friendly” portions and lighter fare. This includes a tuna poke bowl: luscious cubes of fresh, raw fish and avocado with pickled jalapeños, seaweed salad, sesame seeds, and miso dressing—a favorite last season. New this year is a Baja bowl: sticky rice, black salsa, cheddar cheese, oven-roasted tomatoes, sour cream, scallions, green leaf lettuce, and cumin-lime vinaigrette, with optional protein additions that include jerk chicken, shaved steak, and grilled rare tuna. “We want to have options that give you energy to get back out there and ski or ride,” Loring says. An avid snowboarder, the chef says the restaurant’s name came to him naturally. “It reminds me of being in the snow, in a nor’easter, in Maine.”

Fans of Loring’s signature go-big-or-go-home food will also find plenty of choices at Hunker Down. After a long day of skiing (which in my case involves a good amount of falling and getting up, burning extra calories!), I’d happily tuck in to the outstanding, oversized chicken Parmesan—the chicken cutlet pounded appealingly thin, covered with a lush, garlicky tomato sauce, mozzarella, and fresh herbs. The menu also lists an assortment of burgers, including the Mac ’n’ Stack, with two fried macaroni-and-cheese patties in place of the bun. And this year, in response to customer requests, the burgers will come with fries. “We listen to people, and we want to make them happy,” says Loring.

“We’re up there because we love it, and it’s a community,” says Fraser. “We’re offering something that’s a little different—people are up there for three or four nights at a time; they want options.” For the upcoming season, he and Loring hope to attract more locals to Hunker Down. “We’re thinking discounts and specials, maybe movie or trivia nights—we’re figuring it out,” says Loring.

General manager Jennifer Czifrik echoes Loring’s eagerness to attract locals, hoping to build relationships that encourage mountain-area residents to think of Hunker Down as “their place.” Czifrik, a food-service veteran who worked at Sunday River for several years and also ran the dining facilities at the College of the Atlantic in Bar Harbor, has a cheerful yet no-nonsense demeanor that seems just right for a casual ski-mountain bar and restaurant. She speaks passionately about the quality and inventiveness of the food at Hunker Down: the crunchy fried chickpeas that stand in for croutons on the Cobb salad, the bread bowls for chowder that are baked at Loring’s restaurant, Slab, in Portland, the “homemade Cheez Whiz” that blankets the nachos. “When I first saw Jason, he was saucing wings at Binga’s, and now he has his own places,” she says. “There’s a fun-ness to his food, a stamp he puts on it that you know: that’s Jason Loring.”

And yet, Czifrik says, each restaurant has its own distinct identity. “When we first opened, everyone was calling us ‘Nosh on the mountain,’ which isn’t a bad thing necessarily, but we want to make sure people know the menu isn’t the same.” For example, the fries at Nosh are thicker than the shoestring version at Hunker Down, although both are available with Loring’s signature bacon dusting. And both restaurants’ menus are similarly well matched with beer. Bar manager Jeff Gerhards is in charge of Hunker Down’s beverage selection, which features a lineup of local taps. “Abe Furth, one of the owners of Orono Brewing Company, grew up skiing at Sugarloaf,” Czifrik says. “When he sees his beer here, his whole face lights up—he’ll go over and talk to people about it.” Beer also stars in one of Hunker Down’s most popular desserts, the Kentucky Beer Float: Kentucky-bourbon-barrel-aged vanilla cream ale, ice cream, chocolate sauce, and whipped cream. “When we bring it out in the dining room, everyone’s head turns,” says Czifrik, adding that the restaurant also makes an under-21 version with root beer.

This season the restaurant is going to be streamlining kitchen operations to better handle the Sugarloaf weekend crowds, Loring says, “so the food can come out faster, and we can be more productive.” Especially now that he and Fraser have purchased a condo at the mountain, he has his eye on the long haul, perhaps even one day rivaling Hunker Down’s predecessor in terms of longevity. “I hope, if I’m lucky, that I’ll die and still own this restaurant,” he says. “But for now we’re just taking it one year at a time.” Or, as he and Fraser might also say, hunkering down for another season of good food and happy times at Sugarloaf. 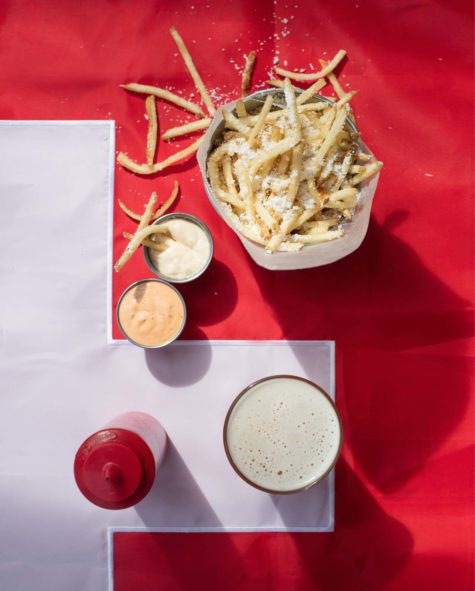 Hunker Down’s thin, crispy fries can be ordered with a variety of toppings and sauces, including bacon dust and house-made “Cheez Whiz.” 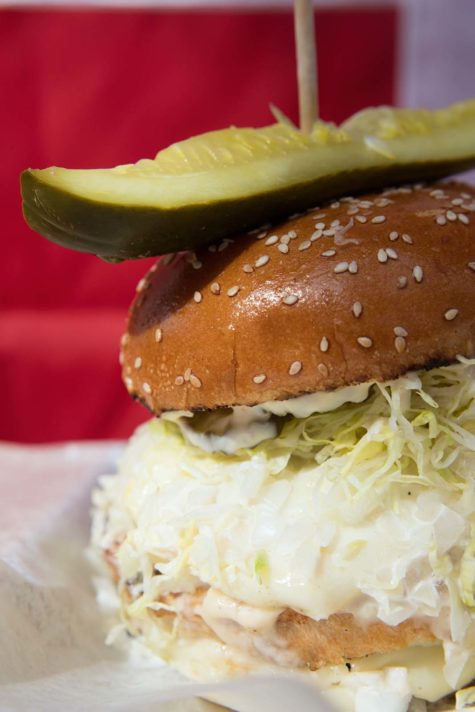 Fans of chef and co-owner Jason Loring’s famously over-the-top burgers will find plenty to like on Hunker Down’s menu.