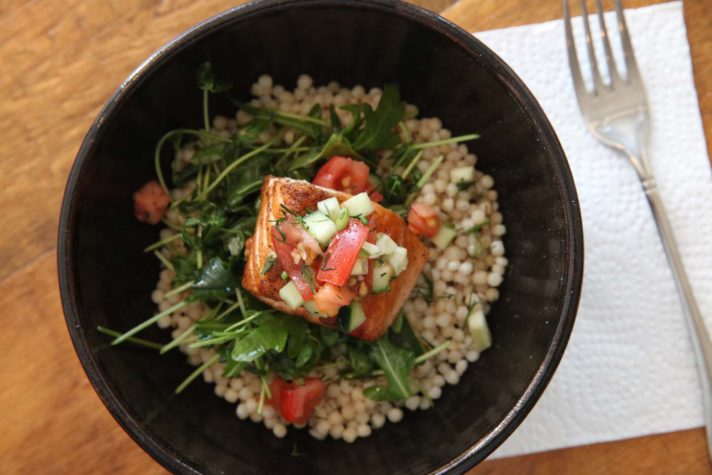 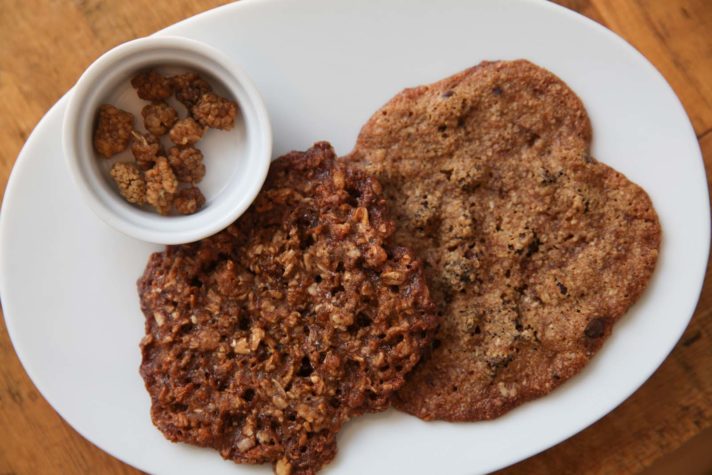 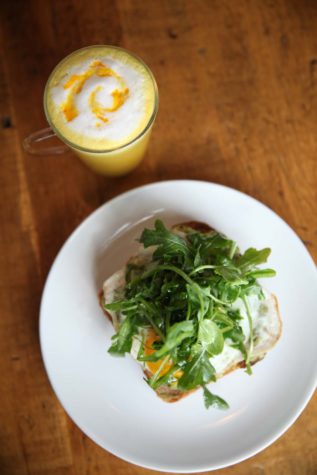 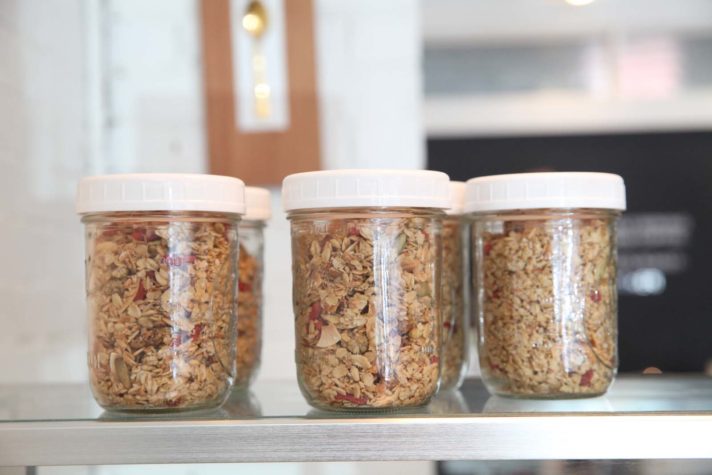 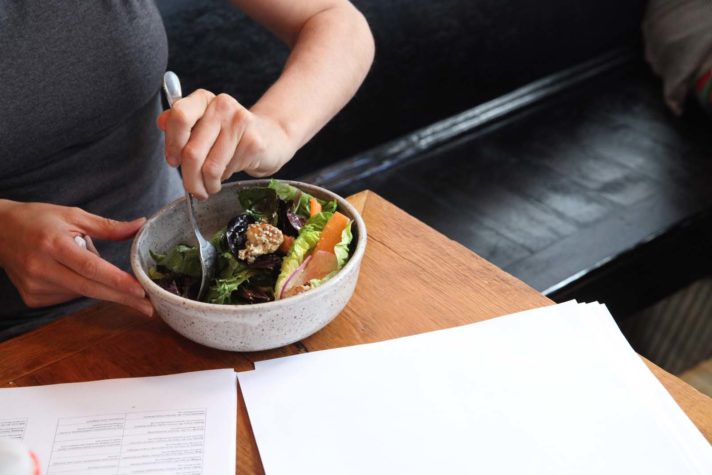 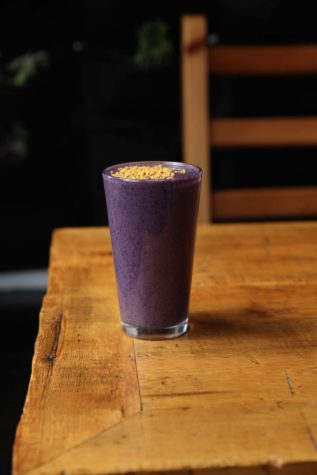 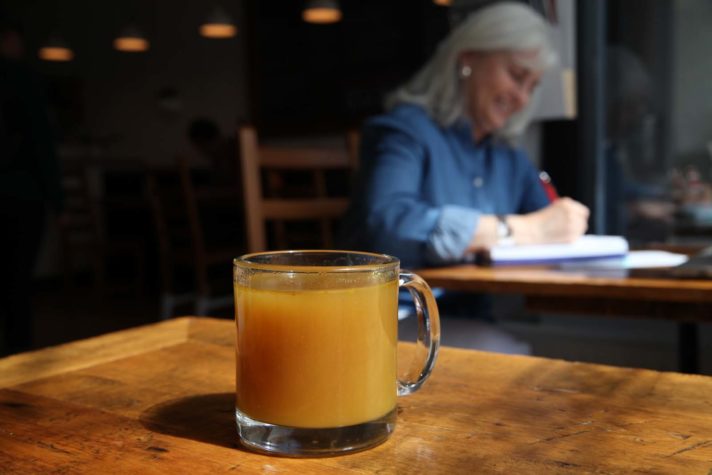 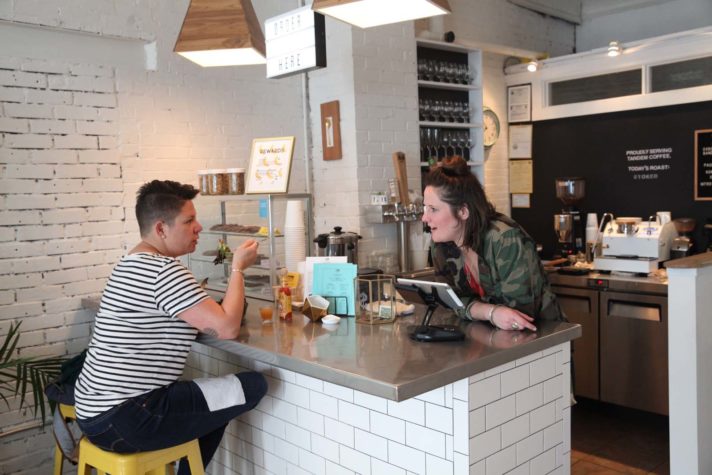 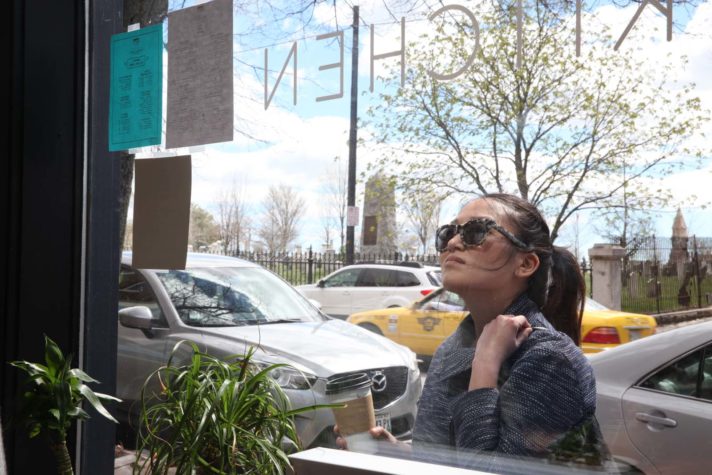 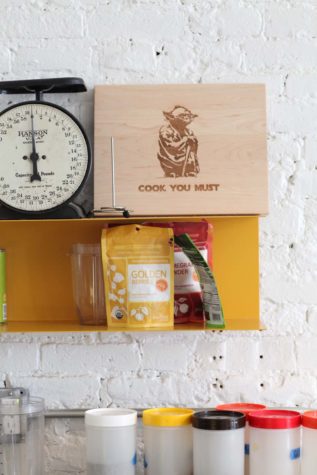 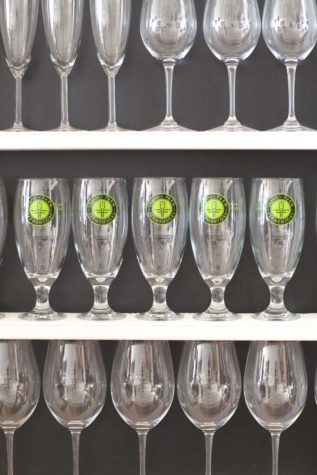 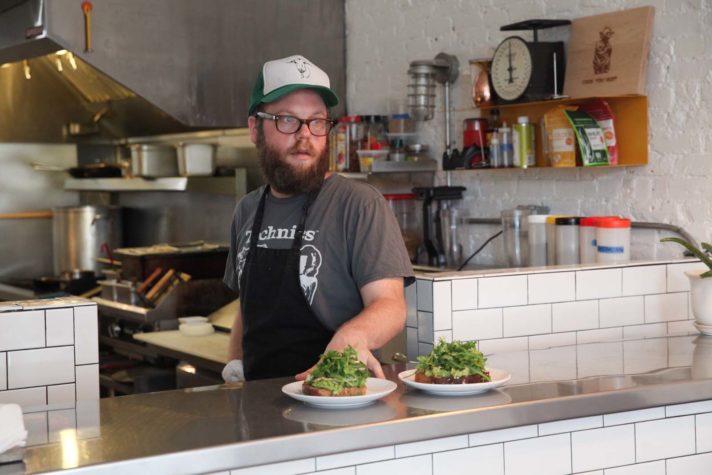 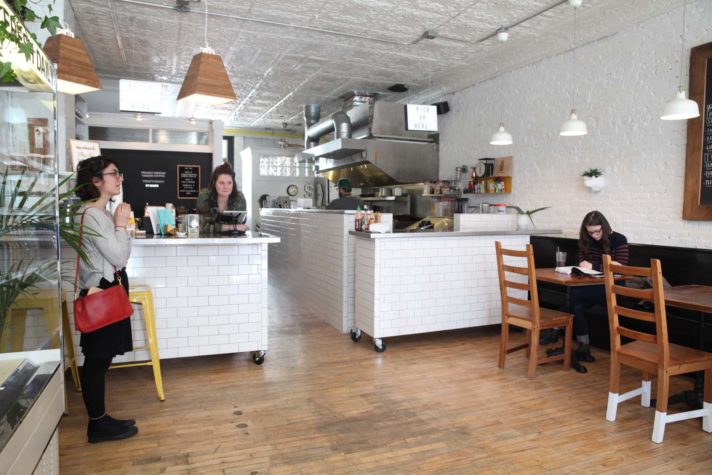 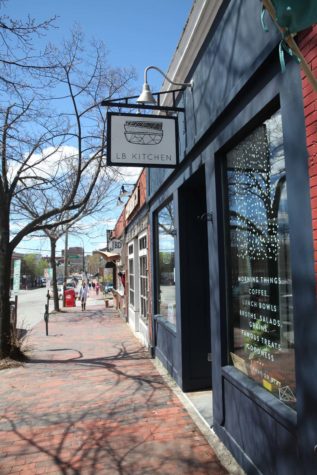 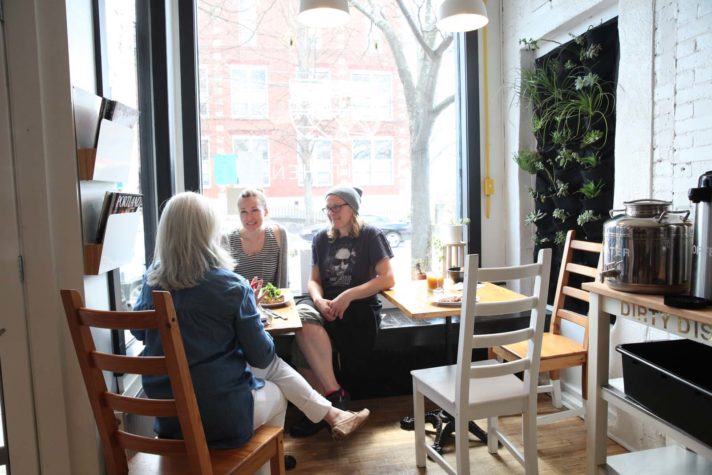 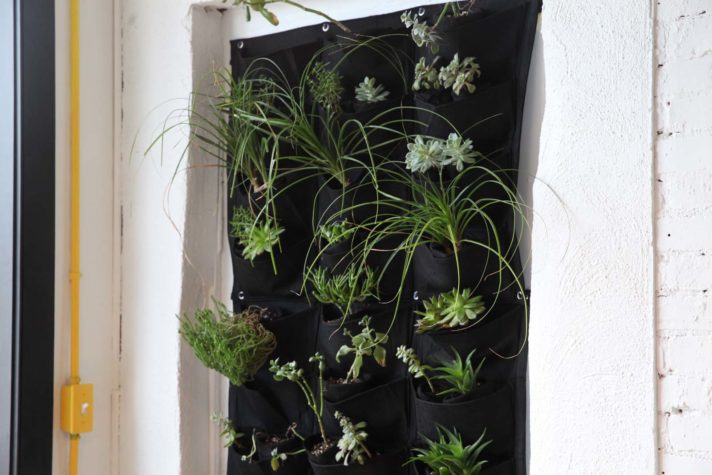 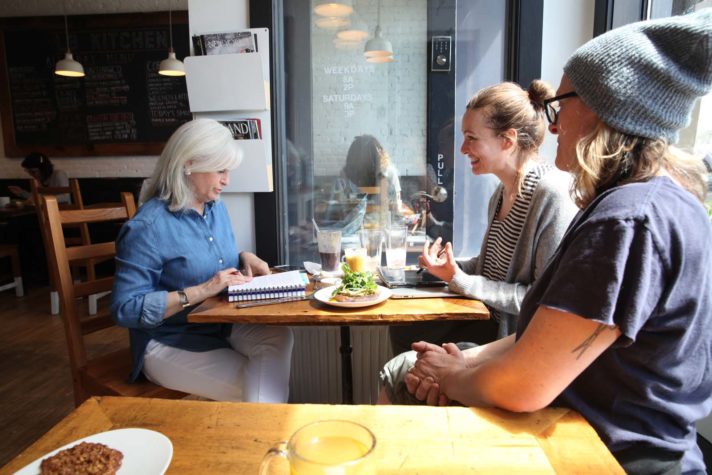 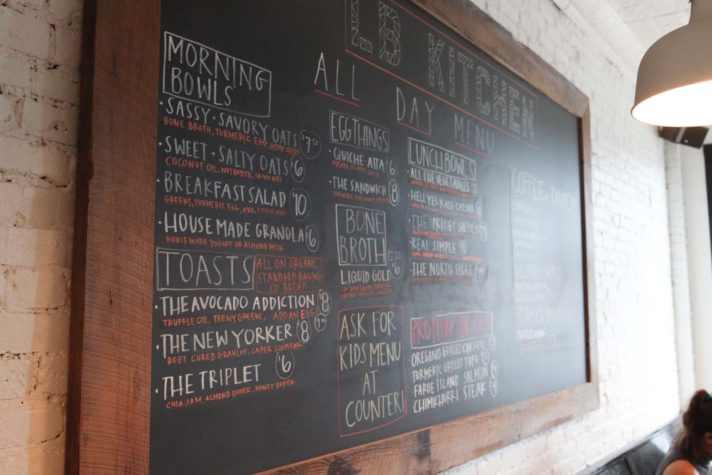 LB Kitchen is like a ray of sunshine: bright, cheerful, serene, and nourishing. The light pours through the big windows on a recent morning visit, illuminating the table where I sit chatting with co-owner Bryna Gootkind. I’m sipping on a Purple Rain smoothie, a tall glass full of everything that represents the LB Kitchen ideal. There’s almond milk and almond butter, blueberries and bananas, as well as acai and hemp powders. Atop the bright purple drink is a sprinkle of bee pollen, rich in proteins and amino acids. “Everything here is intended to have some kind of function beyond being delicious,” says Gootkind. She’s an expert in natural and functional foods and passionate about healthy eating. Chef Lee Farrington is Gootkind’s partner, in business and life. “When Lee and I got together, our food philosophies were different, but she came around,” Gootkind says. Now the pair see eye-to-eye on the benefits and appeal of wholesome food, and work together to offer diners who want the same types of food they eat at home. “The concept felt natural and easy to us,” Gootkind continues. “I would suggest ingredients that pair together to provide optimal benefits, and she makes it taste good. Lee is kind of a magician in the kitchen.”

That Farrington is a magician in the kitchen is no secret. She previously owned and cooked at the popular Figa, located in the same space. The place sat empty for four and a half years while Farrington and Gootkind decided what their next step would be. “We couldn’t decide if we should rent it out or do something ourselves,” says Gootkind. “We knew we didn’t want to do dinner service again. We were trying to figure out how to make a restaurant that fit more into our lifestyle.” With one child at home and another on the way, the couple wanted to be able to finish up the day by 3 or 4 o’clock. “We saw a hole for casual, healthful food in Portland,” says Gootkind. “We want to get people excited about trying something different, and leave here feeling energized. We’re making our mark as delicious and healthy.”

Their mission starts first thing in the morning, with an enticing selection of breakfast options. Avocado toast has become a trend both for its Instagram appeal and its nutrient-rich deliciousness. LB Kitchen’s version checks both boxes. Ripe avocado is mashed with a bit of truffle oil and spread on Standard Baking Co.’s hearty five-grain bread. Top with a coconut oil-fried egg and flourish of fresh greens, and you’re ready to greet the day. The New Yorker toast includes beet-cured gravlax and tomato with a “caper shmear” (that’s cream cheese, in case you don’t speak New Yorker). There’s also a daily “quiche-atta,” the morphing of a quiche and a frittata. Organic oat breakfast bowls skew more to the savory side than the sweet, including one that uses the restaurant’s Liquid Gold bone broth as a base. Bone broth is a menu staple and something of a magical elixir at LB Kitchen. “I saw this as a trend quite a while ago,” says Gootkind, “but its medicinal benefits and qualities are ancient.” Farrington roasts chicken bones for hours, coaxing out flavor and concentrating the nutrients. For an extra punch, coconut oil, turmeric, a known anti-inflammatory, and other spices are added. The Liquid Gold is sold by the cup for a warming and savory pick-me-up and by the quart to take home.

Lunch bowls continue the theme, offering light and flavorful meals to energize and nourish. The Springy Salmon Bowl is a delight, the grilled fish served with Israeli couscous and a tomato and cucumber relish with lots of fresh dill. There’s a kale Caesar salad with dressing that contains “Cashew Obsession.” When I ask about it, Farrington brings me a taste, but won’t reveal the ingredients other than nuts and nutritional yeast. It has a hummus-like consistency, a nice tang, and useful versatility for other dishes and sandwiches. I love All The Vegetables, a bowl with a base of whole grains and seasonal produce. It’s just the kind of thing I’m always looking for at lunch—simple but satisfying and nutrition-packed. Every time I ask about an ingredient, Farrington jumps up to bring me some of it to taste. A favorite of theirs is mulberries, rich in the antioxidant resveratrol, vitamin C, and iron. The dried super fruit is used in several dishes, including the chewy Skinny Jeans cookie. Yes, dessert is available at LB Kitchen, including a vegan chocolate cake that’s become a runaway hit.

The couple tells me they’ll soon be adding more options to the menu, including a banh mi bowl, making use of seasonal ingredients. There will also be a special, once-a-month dinner series with guest chefs. “It’ll be different than your typical night out,” says Farrington. “It’ll be more educational, and there will be a charitable component, too.” I finish up my golden Wellness Latte, a soothing blend of almond milk, turmeric, and other spices that help activate the anti-inflammatory qualities of the turmeric. It’s time to tackle the rest of the day, and now I’m ready. 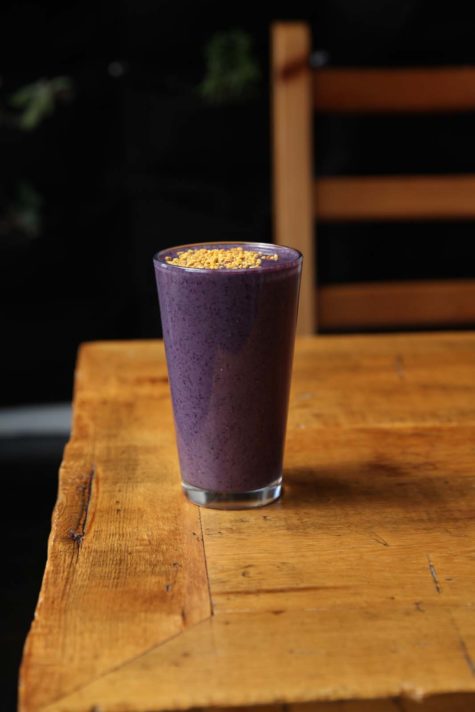 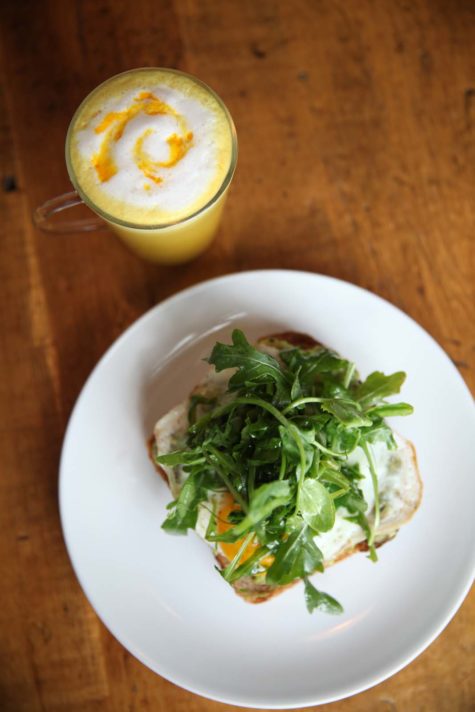