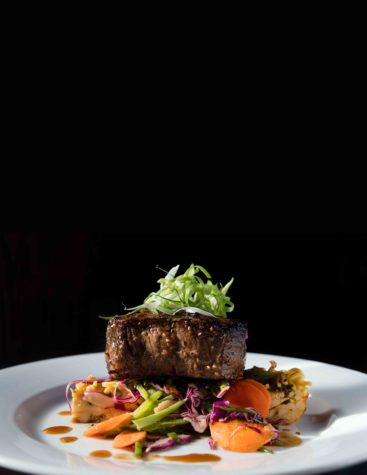 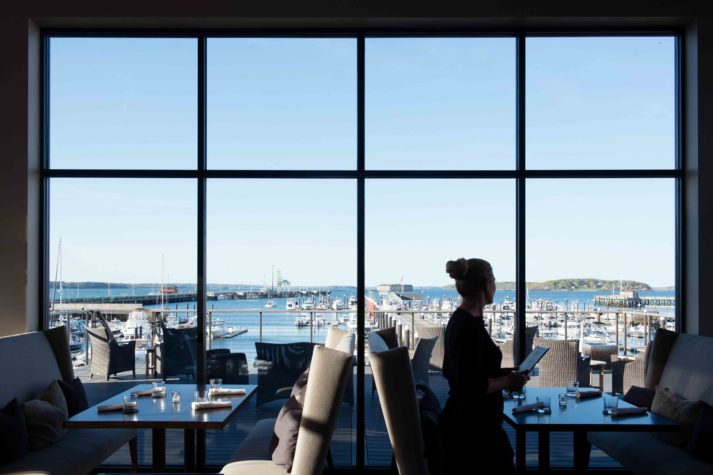 Port Harbor Marine and Fort Gorges are seen through the large windows in the main dining room. 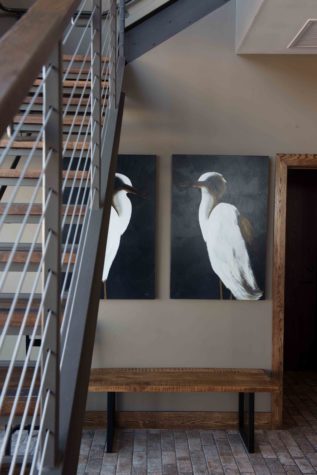 The restaurant’s decor references its seaside location without being overtly nautical. 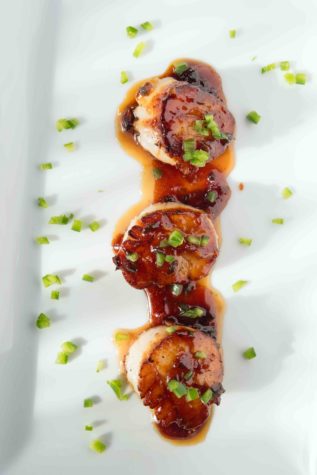 An appetizer of seared sea scallops with citrus-ginger-jalapeno glaze.

More Than a View

Overlooking the busy pier and docks at Port Harbor Marine in South Portland, the stream- lined, modern exterior of North 43 Bistro may surprise those expecting the buoys, anchors, and draped fishing nets that festoon so many waterside restaurants. Natural wood planking wraps the strikingly modern building, which has a flat roof that swoops upward toward the water like the prow of a boat. Walls of tall windows and spacious decks on two levels offer nearly every diner a view of Fort Gorges and the Casco Bay islands. Inside, the look is equally devoid of fuss, yet warm, with dark wood ta- bles and chairs, amber-hued lighting, and an upholstered, high-backed banquette strewn with pillows in the main dining room. A bright, high-ceilinged space on the second floor can be used for private parties or over- flow dining. “We wanted it to be masculine and not too modern,” says chef Stephanie Brown, who opened the restaurant with business partner Laura Argitis in June 2017. “As great as it is here for three months out of the year, we have to think of the other nine months when the weather is not always pleasant, and we wanted it to feel good in here when it’s cold, rainy, or snowy outside.”

Having first visited North 43 Bistro on a cold and gray Saturday in February, I can attest to the success of their vision. While snow swirled outside the large windows, the bar felt especially cozy and convivial—not at all like a seasonal restaurant in hibernation. On this late-May Tuesday, the marina is filling with pleasure boats, and the outdoor furni- ture is in place on the decks, and will soon be the most coveted seats in the house. Un- til Columbus Day, North 43 Bistro serves lunch and dinner Tuesday through Sunday. “No brunch,” says Argitis emphatically. “But we have bloody Marys and mimosas, and we might throw a breakfast sandwich on the lunch menu so people can still feel that brunchiness.” She and Brown laugh, which they do a lot. “Even sometimes when we shouldn’t,” says Brown with a wink. Trained at the Culinary Institute of America in Hyde Park, New York, Brown has done stints at the Ritz-Carlton and the Charles Hotel in Boston. Yet her current style is relaxed and informal, eschewing traditional starched chef jackets for black T-shirts that match the staff uniform. The open kitchen along the back wall of the dining room allows din- ers to see Brown in action—and allows her to stay on top of what’s happening at the tables, which she frequently visits. Having previ- ously worked in both the front and back of the house, she is as comfortable interacting with diners as with her cooks.

Both natives of Massachusetts, the two women met when they were restaurant neighbors of sorts: Argitis opened Falmouth Sea Grill (now Dockside Grill) in Falmouth in 1999, and Brown launched Seagrass in Yarmouth in 2005. They each sold their re- spective business in 2013, Brown going to work as executive chef at the Woodlands Club in Falmouth and Argitis focusing on Old Port Sea Grill in Portland, which she still owns. The two remained friends, and when the opportunity arose to create a new restaurant together, they jumped. “When we were both on our own we would call and bounce ideas off each other,” says Argitis. “We’re on the same page about everything.” She handles the business side of things at North 43 Bistro, while Brown runs the kitchen and plans the menus, which change every four weeks. “I get bored, and I’m a firm believer that you can taste boredom,” Brown says. She describes her style as “American bistro-style cuisine with Asian, French, and Tuscan influences.” And the same line of thinking that drove design decisions also impacts the menu, which is not centered on the seafood dishes one might expect at a marina restaurant. “You can go get amazing clam chowder by boat or land—you don’t need me to make it,” Brown says.

A few evenings later, I’m nestled into the banquette sipping an intensely gingery margarita and listening as the attentive server Jim Haines (a veteran of Shepherd’s Pie, Francine Bistro, and Five Fifty-Five, among others) explains that yes, the menu does change often, but there are always meat, fish, and vegetarian or vegan options. Tonight’s single-page list is a typically concise selection—five starters, three salads, and seven entrees—and the owners are diligent about keeping the restaurant’s website updated with current offerings.

Fried calamari is a bellwether for me, and Brown’s is excellent: the crispy coating is almost tempura-like, and the squid is tender. The mussels, too, show the chef’s skill. Plump and sweet, they’re bathed in a light basil and garlic–scented broth with soft chunks of tomato—an ideal dip for the toasted focaccia that accompanies the dish. Between courses, I ask Haines to recommend one of the wines by the glass, noting they are all the same price: $12. He offers a taste of Terredora Greco di Tufo, an aromatic Italian white that pairs perfectly with my fish, a generous slab of halibut topped with a pistachio-coriander crust and served on a bed of sautéed spinach and purple potato. It’s a well- seasoned, balanced combination, with the toasted nuts adding a welcome crunch. My companion is equally pleased with his rack of lamb. Coated with Spanish-spiced crumbs, the meaty, medium-rare chops are plated with asparagus, grilled potato, and a flavorful blend of roasted piquillo peppers and feta cheese—a satisfying dish for a cool evening on the cusp of summer.

The sun is setting as our plates are cleared, and a glow settles over the room. I can rarely resist a lemon tart, and pastry chef Karen Turner’s is pretty and very good— tart lemon custard in a buttery shortbread shell with crème anglaise, raspberry sorbet, and graham cracker crumbs.

Of course, North 43 Bistro’s location makes it a popular destination for boaters, who can dock right in front of the restaurant. “The marina is incredibly accommodating to our clientele,” says Argitis, adding that it’s not uncommon for summer visitors to make the trip from Portland by private charter. “When you can arrive by boat and enjoy a meal on the water, that’s just a huge overall Maine experience.” 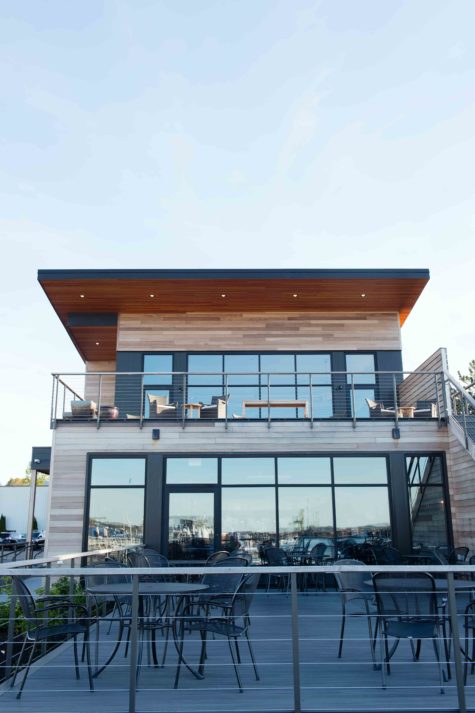 North 43 has decks on two levels that offer sweeping views of Casco Bay. 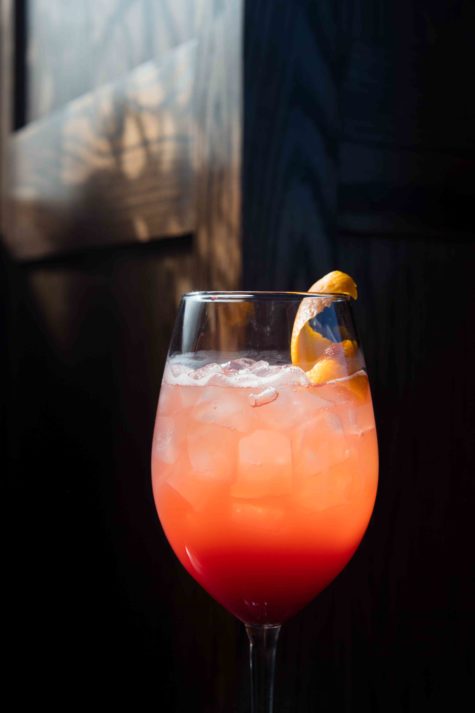 The Spring Spritz is made with Aperol, blood orange puree, and prosecco. 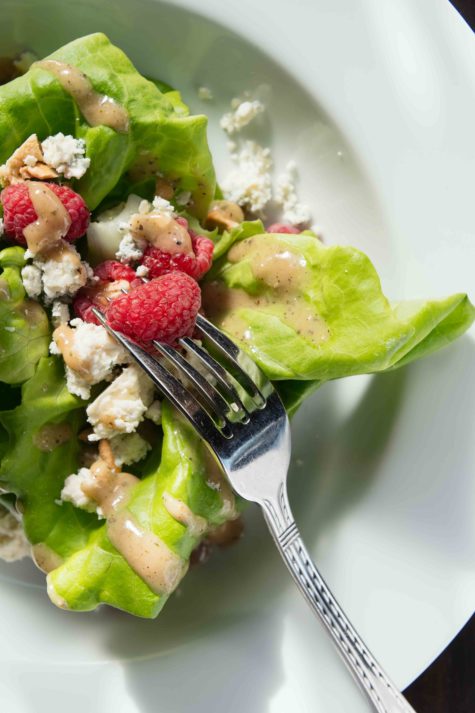