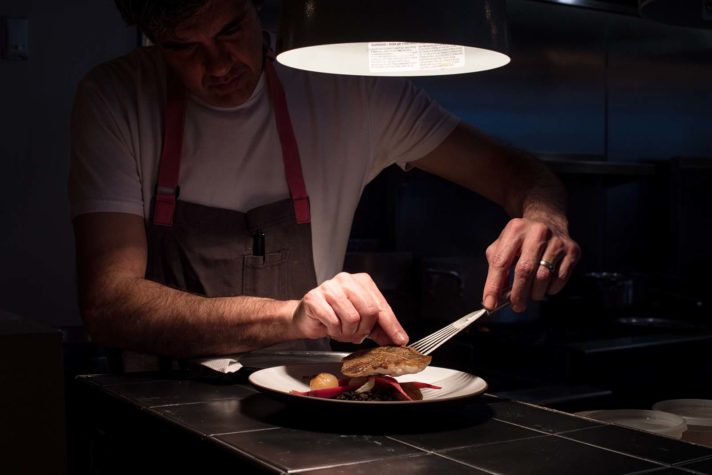 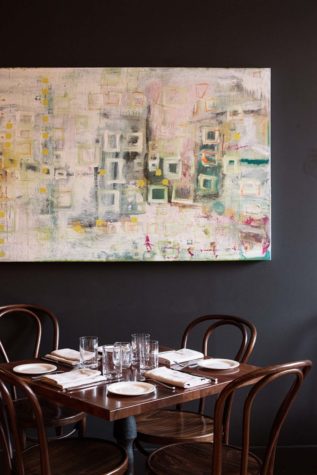 A painting by Portland artist Marci Spier in the main dining room. 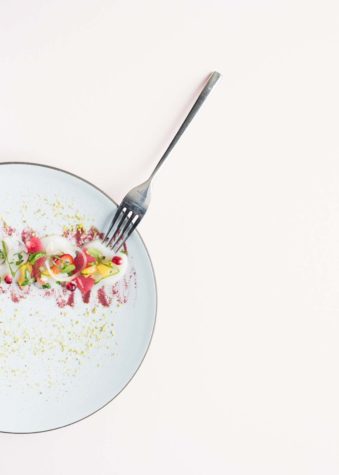 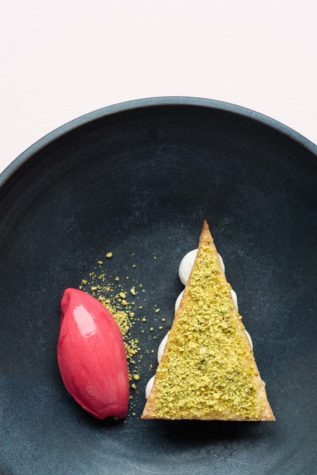 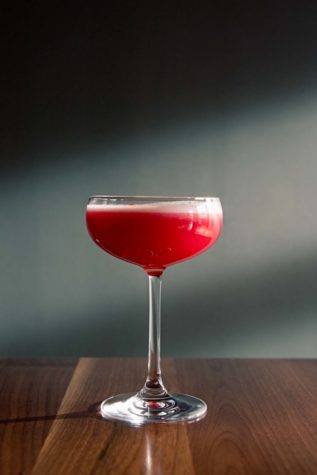 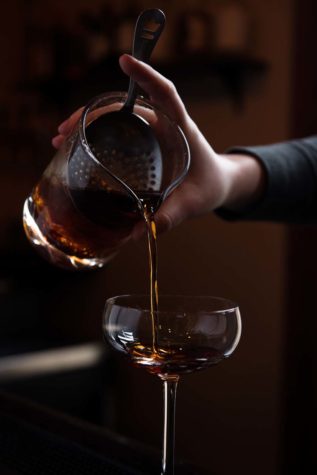 Cocktails all feature Mainemade spirits, including this Black Manhattan, made with Gunpowder Rye from New England Distilling in Portland.

A newcomer chef puts Portland’s Bolster, Snow, and Co. in the spotlight

On the upper reaches of Congress Street, one of Portland’s newest restaurants has in just seven months become one of its hottest dining destinations. Quietly stylish, with serious talent in the kitchen, Bolster, Snow, and Co. is making its mark by delivering on the promise inherent in every fine dining experience: food and service that both excite and satisfy.

Bolster, Snow, and Co. is named for the family of Mellen E. Bolster, the original occupants of the brick Victorian-era mansion now repurposed as a boutique hotel, the Francis. Tony DeLois, who owns the hotel with his brothers, Nate and Jake, saw the potential for a restaurant in the 50s-era addition on the building’s main floor. A bar area with tall windows looking out to the street connects the hotel’s elegant entrance to Bolster, Snow, and Co.’s main dining room, which is simply appointed with bentwood chairs surrounding polished wood-topped tables and features a changing collection of local artists’ work on the walls. The centerpiece of the space is the open kitchen on the back wall, its gleaming stainless steel hood and black-subway-tile dining bar providing contrast to the wood floor and furnishings. Portland-based designer Tracy Davis is responsible for the decor of both the hotel and restaurant, in which vintage architectural details are complemented with sleek, contemporary furniture and accessories. “We wanted to modernize it a little bit, so it would be more timeless and less of a timepiece,” says DeLois. A smaller dining room off the kitchen boasts a fireplace and a collection of paintings by artist Alfred “Chip” Chadbourn, whom the DeLois family knew from Yarmouth, the brothers’ hometown.

Tony DeLois is a hospitality industry veteran, having worked in both culinary and management positions including several years with New York City restaurateur Danny Meyer. His chef search for Bolster, Snow, and Co. started locally but soon broadened, eventually connecting him to Nick Verdisco, then executive sous chef at the Inn at Pound Ridge in New York, owned by celebrated chef Jean-Georges Vongerichten. Verdisco and his wife had fallen in love with Maine on a visit to Portland and Acadia National Park and wanted to figure out how to relocate. He ended up bringing three chefs from the Inn at Pound Ridge with him to Bolster, Snow, and Co. “He gave his notice, and a week later people said, ‘We want to move with you.’ That really speaks volumes of the character that we have in the kitchen,” says DeLois. Animated and charismatic, Verdisco details the twists and turns of his career like a master storyteller. Born and raised in Arizona, he owned a bike shop there for ten years, until the recession caused him to rethink his life. He sold everything and headed east and, following a stint cooking in Toronto, decided to attend culinary school in his family’s native Connecticut. His trajectory has been deliberate. “I was ten years older than everybody around me, so I mentally said, ‘I’m going to be better than everybody I stand next to,’” Verdisco says. That attitude eventually landed him at the Inn at Pound Ridge, where, following a grueling tryout, he embraced the opportunity to bring his skills to the next level. “They told me, ‘The expectation here is you drop three grains of salt, you pick up three grains of salt.’ That has stuck with me,” he says.

The finesse Verdisco cultivated in that rarified environment is evident on the plates at Bolster, Snow, and Co. A crispyskinned fillet of black bass is served on top of tiny beluga lentils with sweet and sour pearl onions, roasted carrots, and a fennel and herb slaw with coconut milk. The dish is at once earthy and fresh, complex and cohesive—it’s astonishingly good. “It is all about trying to get everything in one bite, so that it really comes together,” says DeLois. Slices of tender, flavorful Denver steak (a newer cut from the chuck) are accompanied by spiced fingerling potatoes, crispy lollipop kale, candied kumquats, and silky parsnip puree—a combination of flavors and textures that works beautifully. A pillowy slab of brioche French toast draped with grilled foie gras, garnished with blueberries, spicy maple syrup, mint, and a sprinkling of granola, makes a surprising and delicious starter, the bright flavors of the berries and crunch of the granola perfect foils for the rich, creamy foie. Verdisco changes the menu as he sees fit, “whether it’s because of the season, I get bored, or the customers get bored.” Pastas, which are all made in-house, change more frequently and reflect the chef’s Italian upbringing. “I remember making ravioli with Grandma when I was eight,” he says.

Beverages at Bolster, Snow, and Co. get the same attention as the food, under the direction of general manager Ben O’Sullivan, a fellow veteran of the Vongerichten and Meyer empires. “He knows what works from a chef’s perspective,” says Verdisco. “We jokingly say, ‘Ice is the fire.’ You’re putting together flavors that work; you need some acid, you need some sweet, you need a great product, and that’s it.” An example of this approach is the Black Manhattan, a deeply flavorful version of the classic drink made with New England Distilling Gunpowder Rye Whiskey, Amaro Averna, and orange bitters. Thanks to Tony DeLois’s interest in ciders, the bar also offers a large selection from Maine and elsewhere. “I hope that next fall we can break into doing some fun events here with cider makers,” DeLois says.

One of the three chefs Verdisco brought with him from New York is pastry chef Sarah Miller. For her sophisticated take on her mother’s ricotta tart, she pipes ricotta whipped with honey between crisp and buttery pastry triangles, plated with raspberry sorbet and finely chopped pistachios. As in Verdisco’s savory dishes, the blend of color, taste, and texture is sublime.

With summer on the horizon, the chef is focused on making sure his team is prepared. “We can’t fly into flight, so we’re going to do this step by step,” he says, adding that, by the time the growing season is here, he will have more time to spend with local farmers and other purveyors. “I’m a working chef,” Verdisco emphasizes. “I don’t sit behind a computer in an office on a different floor; I’m on the line every night.” Since the line is so visible, his presence there contributes significantly to the energy at the restaurant. Verdisco makes a point to step out into the dining rooms, greeting guests and asking earnestly for feedback. “Word of mouth in Portland is huge,” he says. “There are amazing restaurants on every block—I can throw a rock to three of them. The trust of a friend saying, ‘Go to this place,’ is I think what matters.” So far, there have been plenty of friends sharing that message, and when summer arrives, visitors will hear it with a caveat: “You’ll need a reservation.” 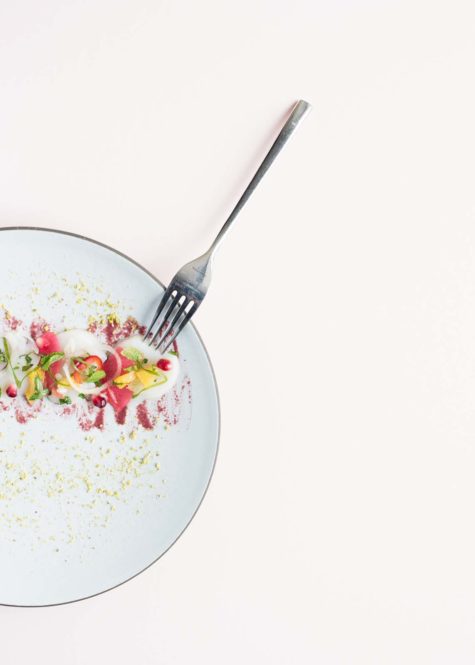 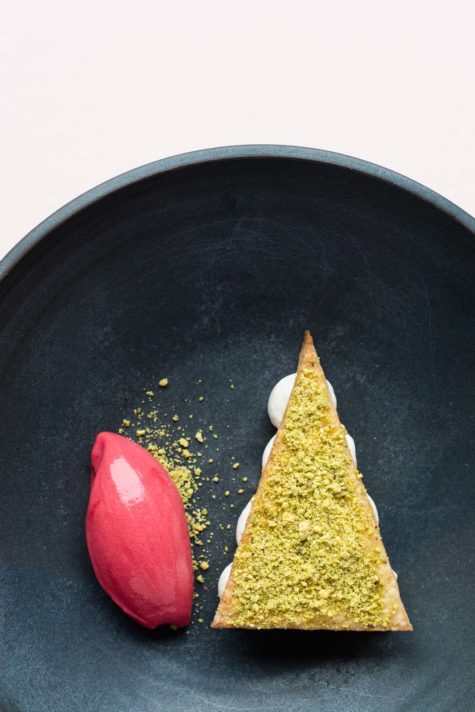