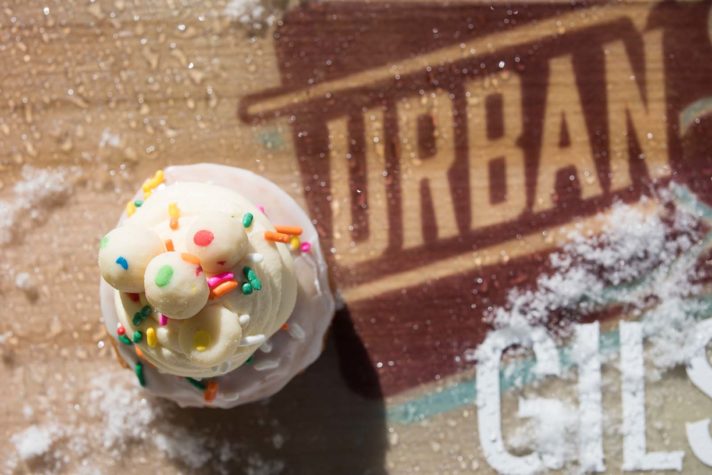 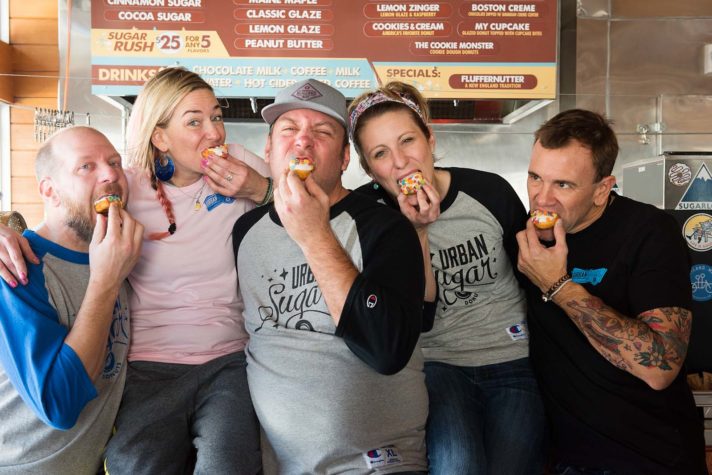 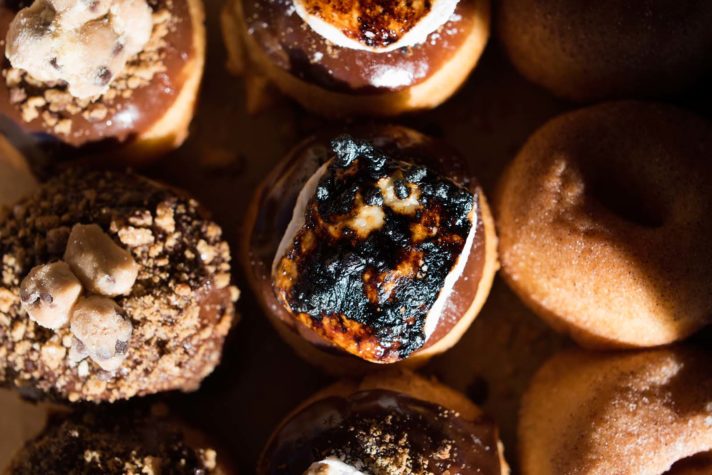 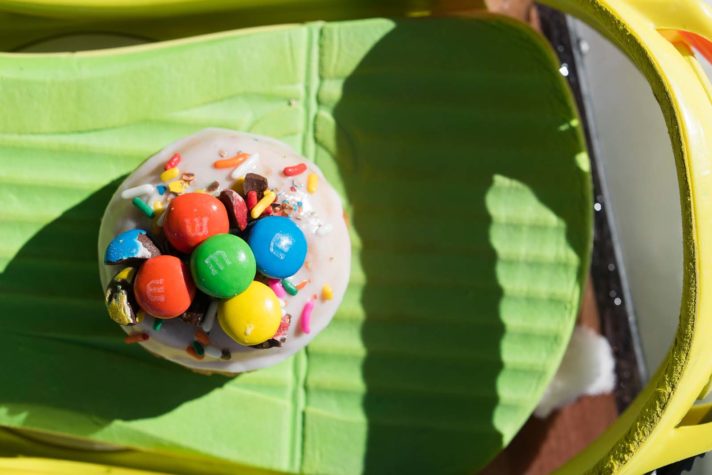 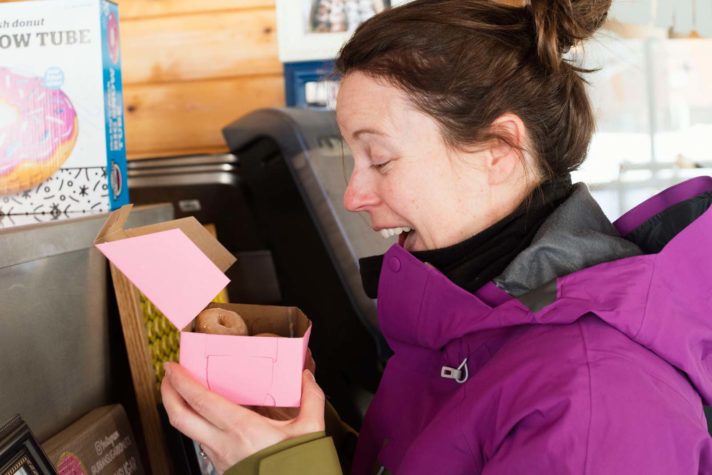 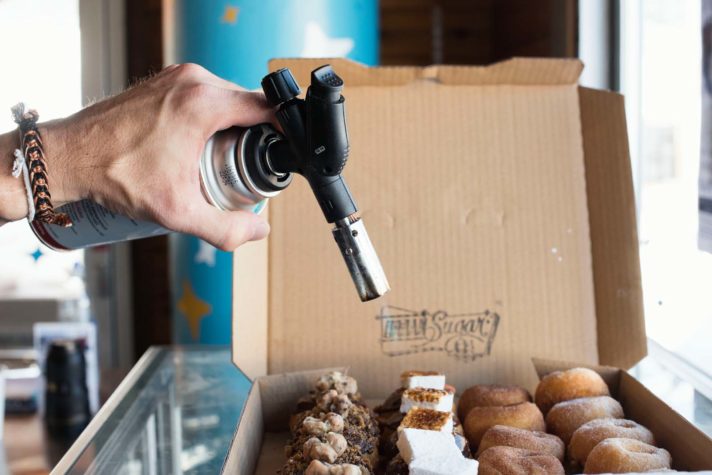 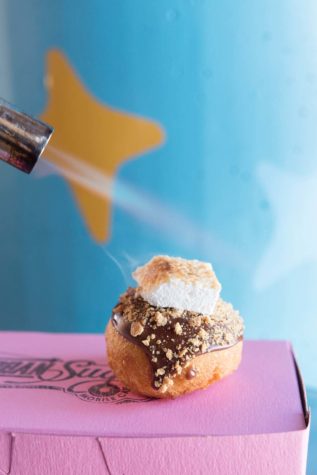 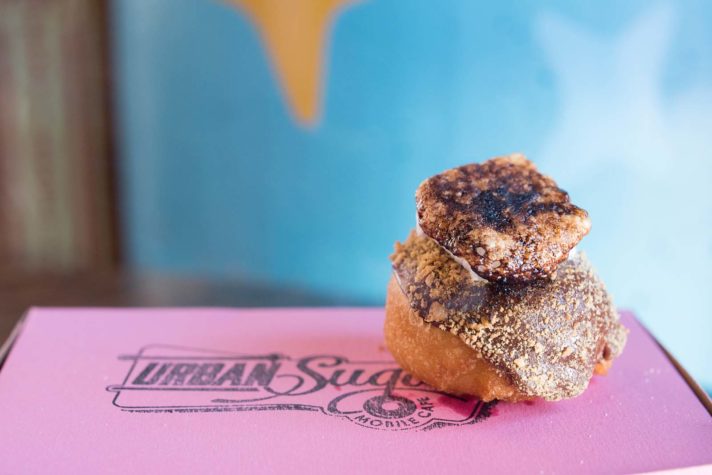 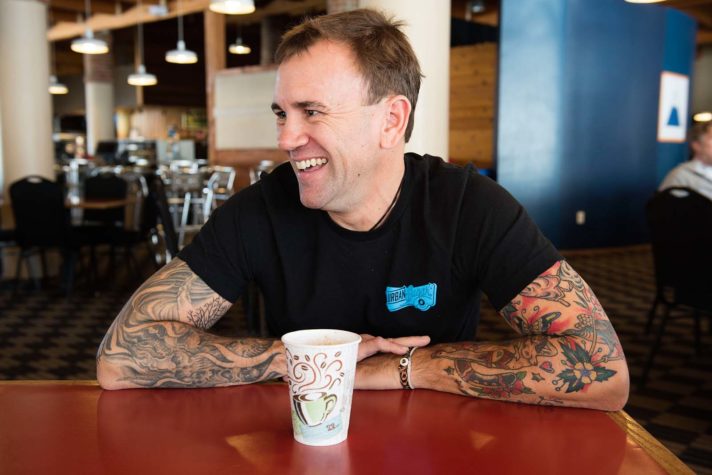 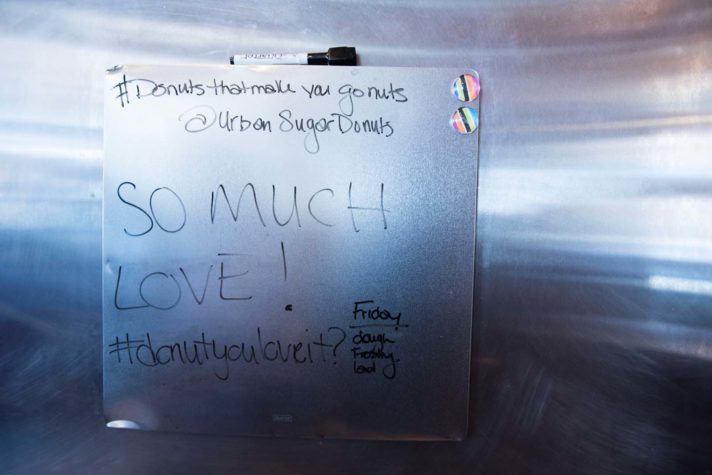 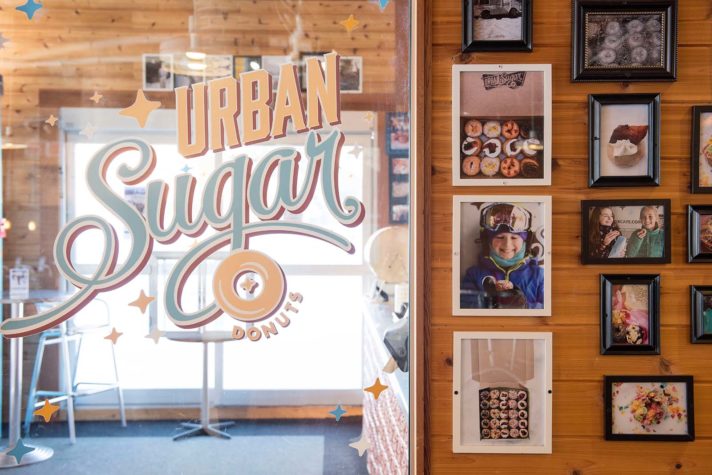 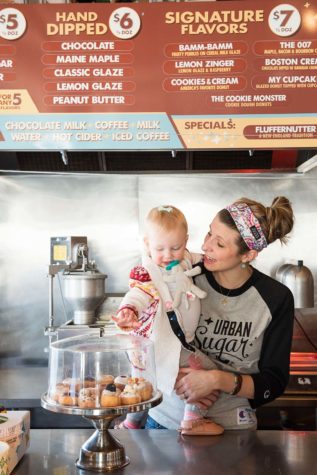 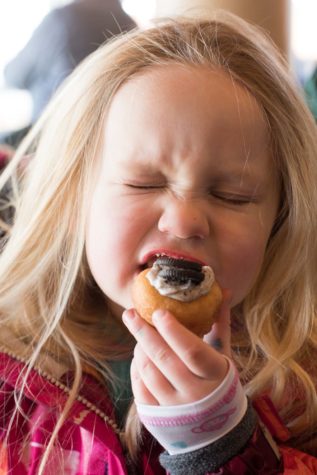 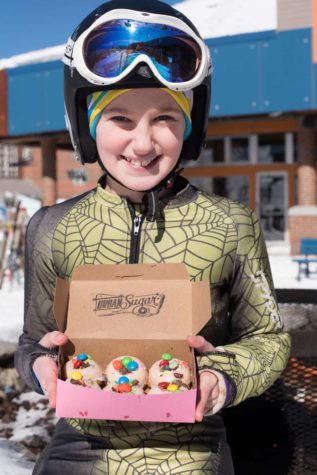 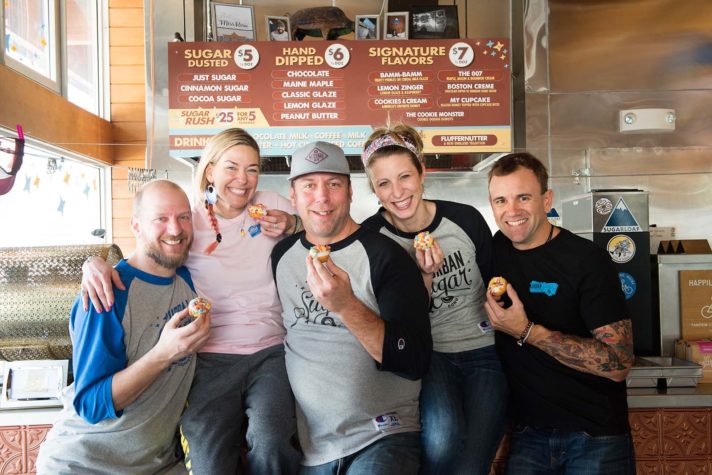 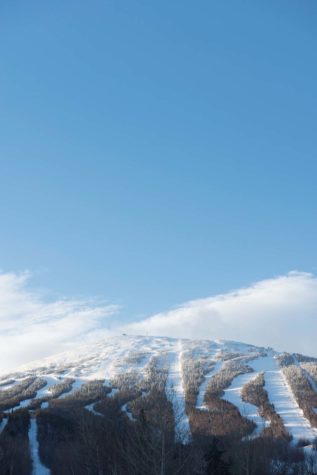 Kevin Sandes, the creator and owner of Urban Sugar Donuts, greets me with a small blowtorch in his hand. “Let me go grab my marshmallows,” he says. He’s putting together s’mores doughnuts for us, and to kick them up yet another notch, he’s now using handmade marshmallows from Portland’s Marshmallow Cart. Each chocolate-glazed, bite-size doughnut will be topped with a marshmallow toasted to order, browned and delightfully gooey. A brown butter graham cracker crumble completes the tiny gem.

Sandes has a soft spot in his heart for doughnuts. As a child, his grandparents would treat him to one after church each Sunday. When they passed away, they left him a little bit of money that he used as a boost to get the business rolling. He had been working at Caiola’s as a manager, which he describes as a “breeding ground for food trucks.” Two of his co-workers bought and ran trucks, selling Middle Eastern food and lobster rolls. “I always knew I wanted to do something of my own,” Sandes says. “But I never wanted a full restaurant.” Attending the North Carolina State Fair, he noticed that the mini-doughnut stand always had the longest line. “I knew I could take that product to the next level,” he says. In the fall of 2013 the Urban Sugar truck hit the road, and one of the first stops was Sugarloaf for Homecoming Weekend. “We were the first food truck to come here. We had no idea what to expect or what we were capable of,” says Sandes. “It was insane.”

For the past two winters, Urban Sugar has been making doughnuts from a small space tucked into a corner of Sugarloaf’s Base Lodge. The Sawduster chairlift is so close that riders could almost be served a snack as the pass by. The space is bright and cheerful, with a good view of the mountain. “It was so cold in the truck; I always wanted to be inside,” Sandes says. “When the space in the lodge opened up, I jumped on it.” Moving indoors gave Urban Sugar a chance to expand the menu, too, offering even more delectable, bite-size doughnuts. That size is appealing for a number of reasons, Sandes explains. “When you open a box of our doughnuts, it’s like a celebration, it’s festive. The small size encourages sharing. And when they’re small, you can try several different flavors,” he says. Doughnuts are all fried to order, and that takes them out of the fast food realm. “It’s part of the experience,” Sandes continues. “We’re not just pulling something off the shelf. At first people didn’t like waiting, but when they taste our doughnuts, they understand why it’s worth the wait.” Skiers, and others in search of a sweet treat, follow the scent of sugar to the little cafe, where Sandes, business partner Rob Higgins (formerly of Gepetto’s), and the cheerful staff are busy mixing, frying, and topping doughnuts. It’s hard to decide on any one flavor when everything sounds so tempting. The menu changes often, whenever the staff (and sometimes the customers) come up with new creations. The Spacey Gracey is named for a young regular who conjured up the idea of a topping a classic glazed doughnut with crushed and whole M&Ms, then colored sprinkles. She’s thrilled to have it named after her as well. Signature favorites include the Bamm-Bamm with Fruity Pebbles on top of a cereal-milk glaze; the 007, sporting a maple glaze, bourbon cream, and candied bacon; and Ol’ Blue Eyes, stuffed with lavender pastry cream and topped with lemon curd and a crush of Nilla wafers. “Everything’s been done before, but we try to put our own spin on flavors,” Sandes says. “And we’ll rotate some of the more unique flavors on and off the menu.” For those who prefer a more savory snack, look for novelties like the Figgy, using fig jam, toasted walnuts, goat cheese, and green onions. Traditional minis are always available, and sometimes nothing tastes better than a warm, freshly-fried doughnut rolled simply in cinnamon sugar. Pair them with a cup of Tandem Coffee or chocolate milk, both available at the cafe. Come summer, look for the Urban Sugar food truck out in Portland.

As I’m waiting for my Sugar Rush, a 25-doughnut box, to take home, Sandes tells a story. “That first weekend we were here for Homecoming was crazy. At one point, I had to run to my car for more supplies. As I was headed down the stairs, there was a little girl holding one of our pink boxes of doughnuts. I heard her tell her mother ‘I think I found my first love.’ I remember that moment like it was yesterday,” he says. “This is about so much more than doughnuts. It’s about making people smile.” 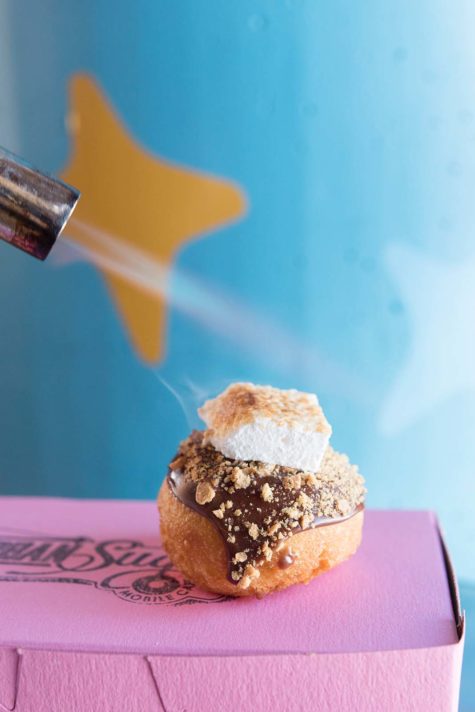 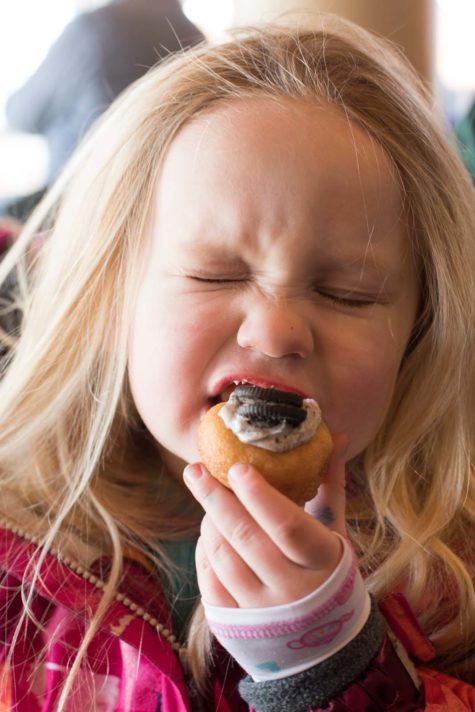