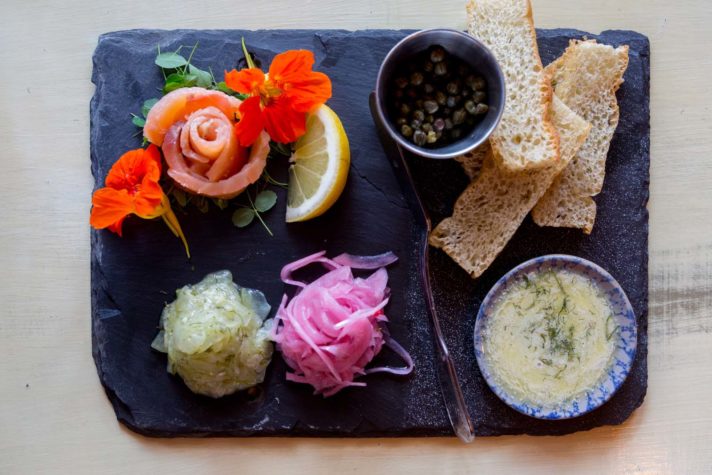 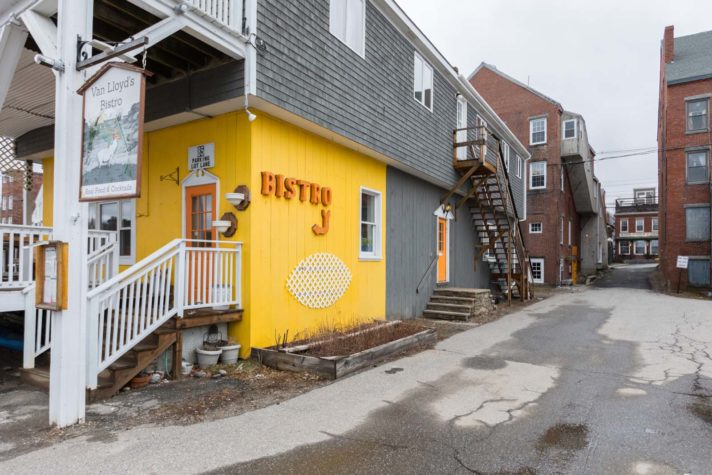 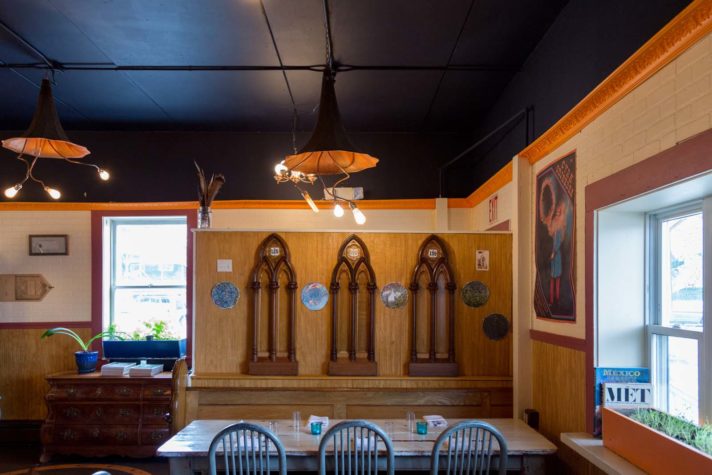 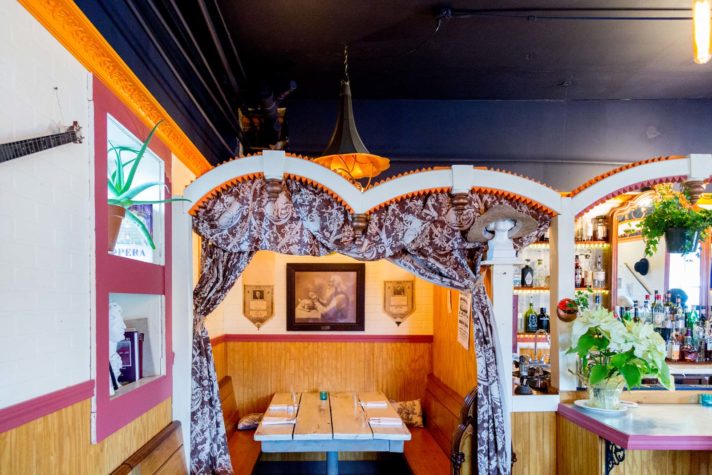 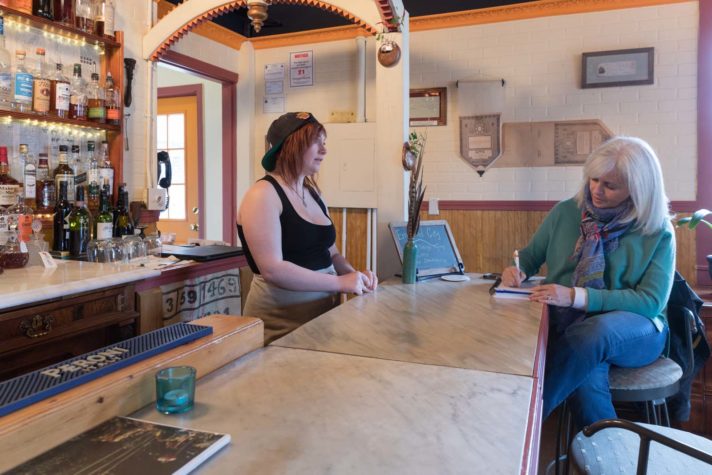 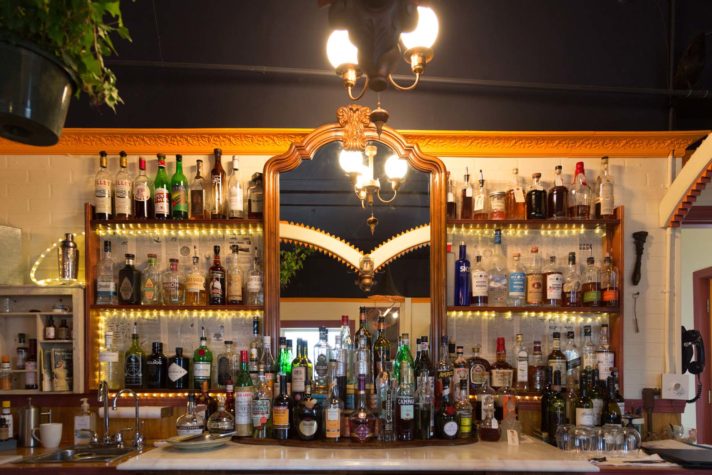 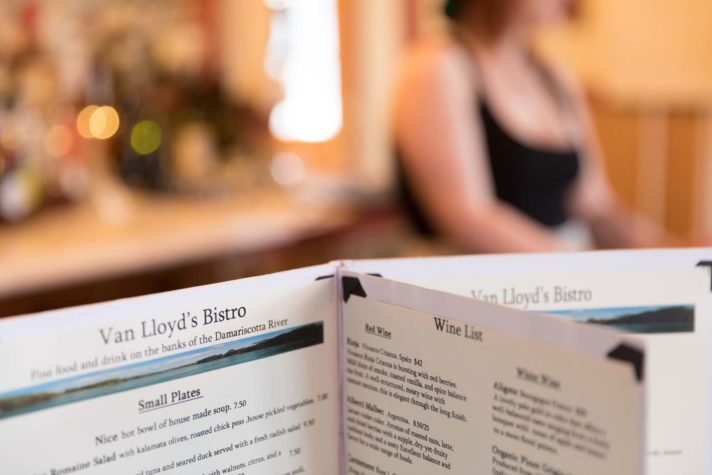 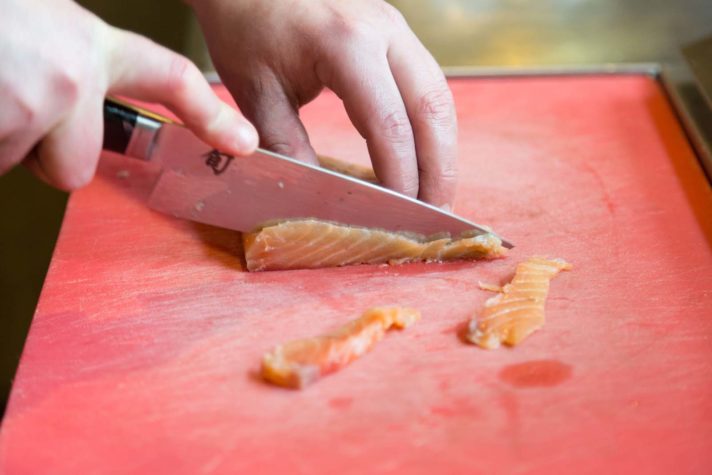 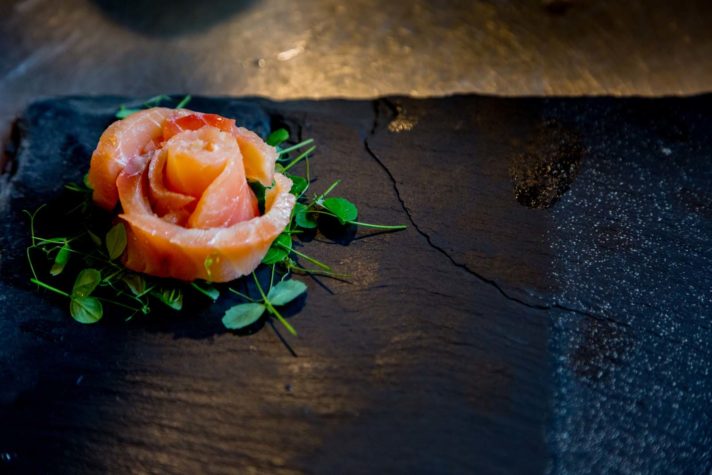 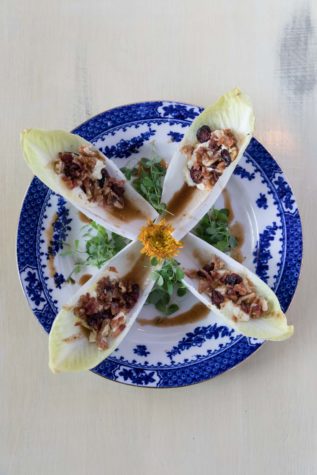 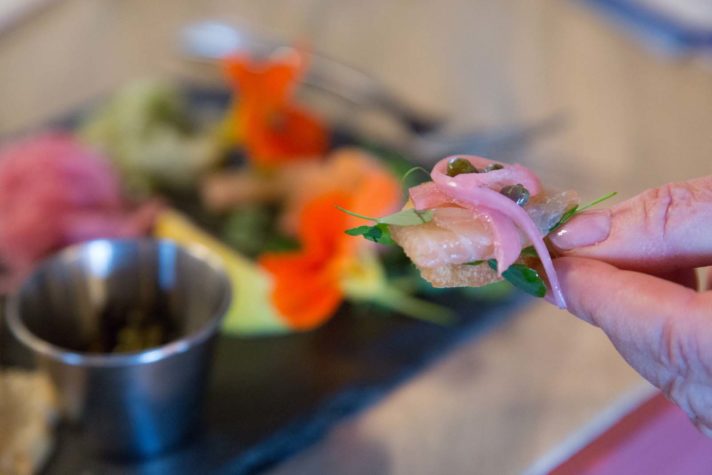 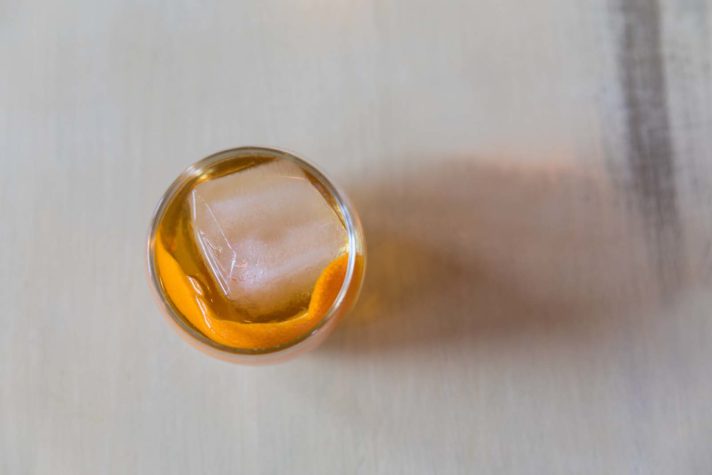 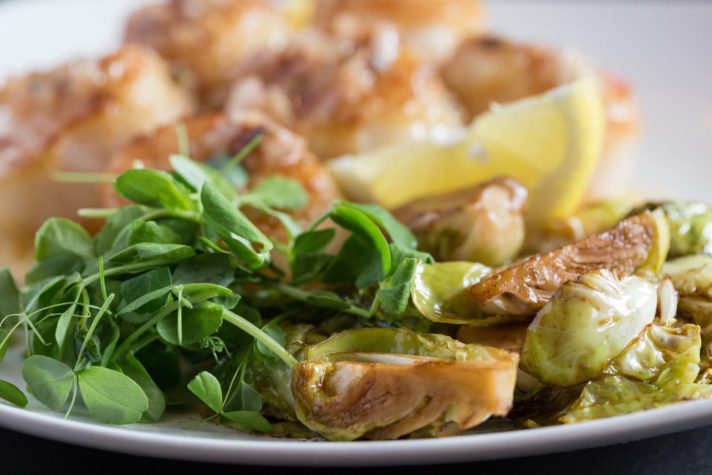 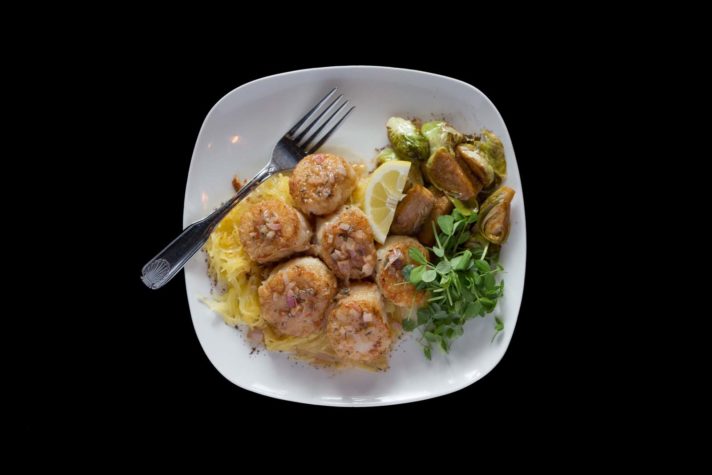 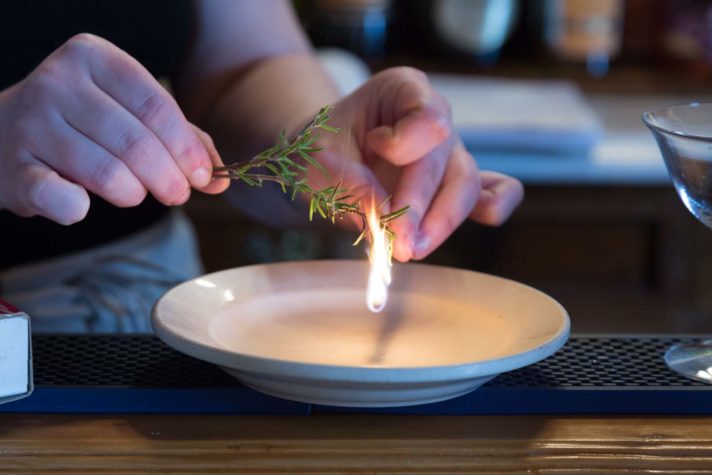 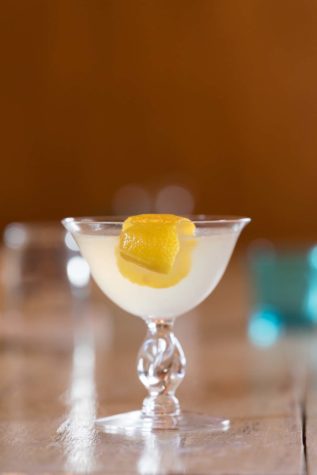 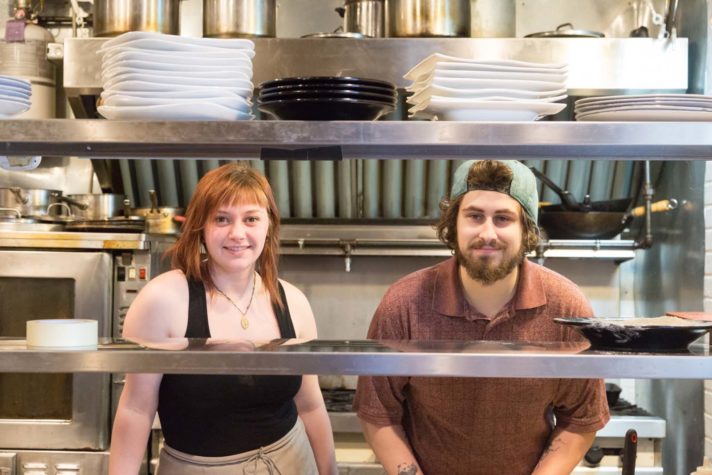 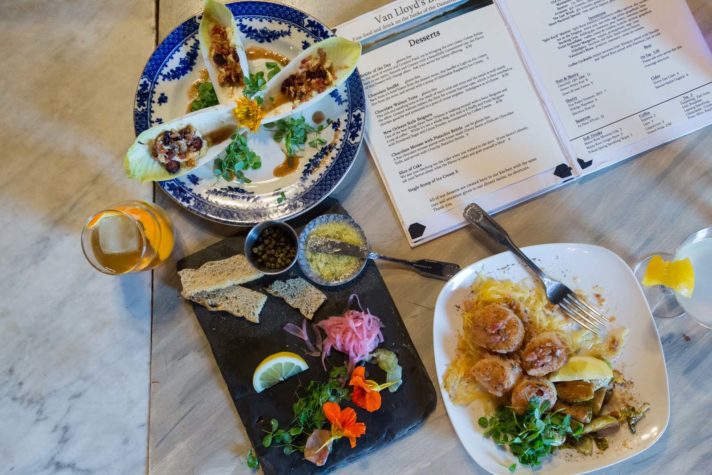 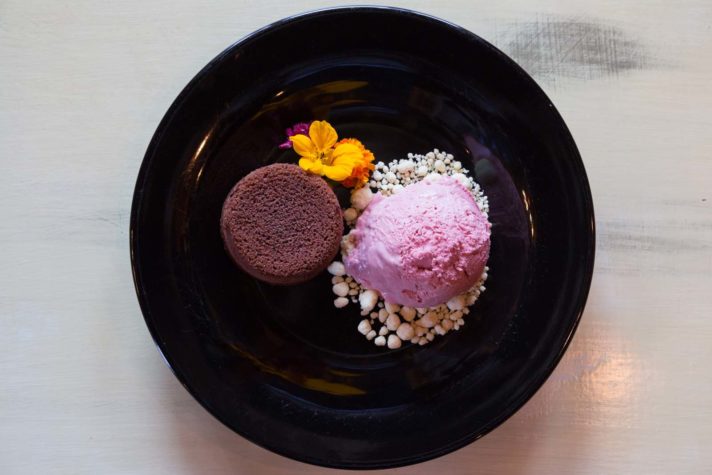 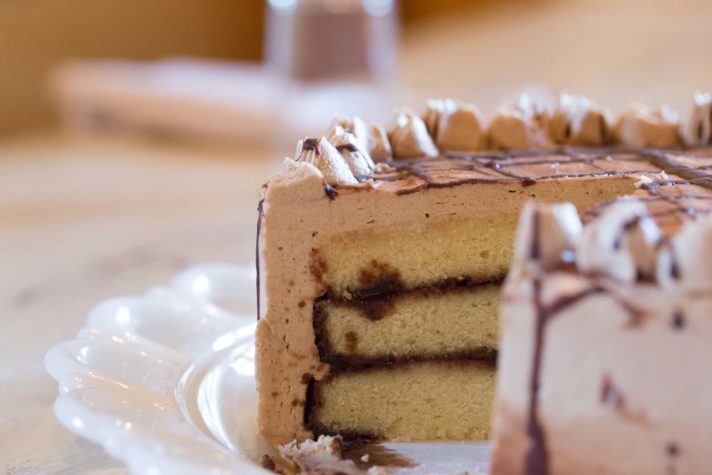 Van Lloyd’s Bistro is funky, fun, and eccentric. Every bit of decor was salvaged, scrounged, or constructed, including church pew benches from the former St. Patrick’s church in Lewiston, hanging lights made from old Victrola horns, and a big arch over the bar that was once a piece of a stage set. On the wall are a top hat and cane, a banjo, and more ephemera that contribute to the offbeat ambiance. An old dresser by the door holds a beautifully frosted cake, tempting guests with dessert before they’re even seated. The restaurant is located in a parking lot in downtown Damariscotta, but the location adds an eclectic element to the restaurant’s charm, along with a water view from the tables on the front porch. Dining at Van Lloyd’s feels like you’re visiting a friend’s home, with its intimate space and the warmth of owner Meredith King and her staff. The food has the feel of home cooking, but kicked up several notches. The restaurant’s motto is, “If we haven’t smoked it, cured it, brined it, pickled it, cooked it, or baked it ourselves, we don’t serve it.”

King adopted this ideal from the previous owners of Van Lloyd’s. She started working at the restaurant when Bernie Delisle first opened it in 2014 with his son, August, and daughter-in-law, Torie.“I’d never worked in a place where so much thought was put into the food,” King says. She has been working in restaurants since she graduated high school at age 16. When Delisle decided to sell the place, King, now 22, purchased it with help from her father. They took possession in January. “I’ve been invested in this place since day one,” she tells me. “I’ve done every job there is to do here. I wanted to keep the concept the same.” That concept is simple: keep the focus on from-scratch cooking, mostly organic, all seasonal, and as local as possible. Even as spring is delayed here on the midcoast, King is growing nasturtiums and pea shoots in a box by the window. She’s eager to get the beds just outside the front door cleaned out to plant herbs and more flowers.

“The menu varies hugely from summer to winter,” King says. “We’re really flexible, and everyone works together to plan the menu. We have a really great group of people who like to bounce ideas around.” The Delisles trained her in the kitchen, but these days she’s mostly handling bartending and baking duties. Her boyfriend, Richard Baird, is the chef. He presents us with a slate board featuring gravlax, cured with hops that they’ve grown themselves. The salmon is curled like a rose, beautiful, silky, and delicious. The accompanying pickled cucumber salad is a perfect complement, and I pile them both, along with pickled red onion and black garlic aioli, on a piece of house-made focaccia for a delectable bite. King has mixed up a Smoking Gun cocktail to go with the dish. She lights a sprig of rosemary and traps the herb under a coupe glass to imbue it with smoke. When it’s ready, she flips the glass and adds gin, pear poaching syrup, and lemon juice for a wonderfully tasty cocktail. While the menu changes often, the seared scallops have earned a permanent spot. The generous portion of seafood is served on top of spaghetti squash, with pan-seared Brussels sprouts. The preparation may change some with the season, but scallop lovers will not be disappointed.

King’s real love is baking, but Van Lloyd’s was her first stint doing it professionally. She credits Torie Delisle with teaching her how to beautifully frost a cake and take her baking skills to new heights. “The reason I’m involved in restaurants is that I love to cook and bake,” she says. The desserts served at Van Lloyd’s show off her considerable skills. She’s been working on a red velvet lava cake, the kind that oozes chocolate ganache when you cut into it. It’s served with a house-made raspberry ice cream and addictive white chocolate crumble. Each bite is a lovely combination of texture and temperature. “I’ve always had a sweet tooth,” she admits. “I started baking so I would always have sweets to eat at home.” She loves to experiment, and her successes are very much to guests’ benefit.

King’s youth brings a special energy to Van Lloyd’s. She bubbles over with ideas, including opening the place early in the summer for coffee and baked goods. Her father and business partner, Gary King, lives in Louisiana, but recently paid a visit to the restaurant to see how it’s faring. “He was relieved to see things are going so well,” says King. 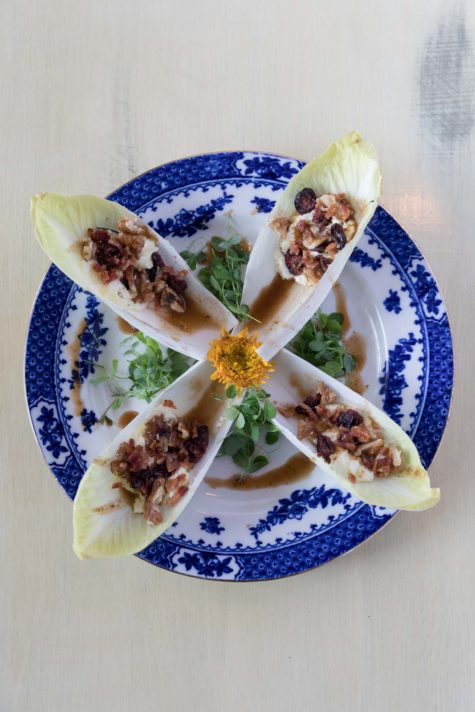 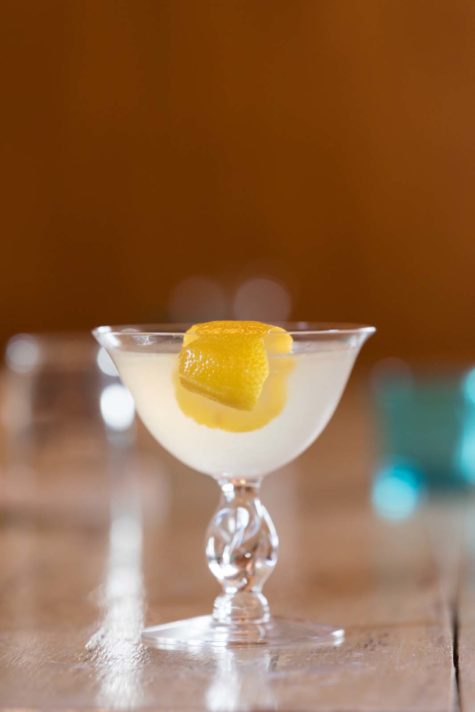