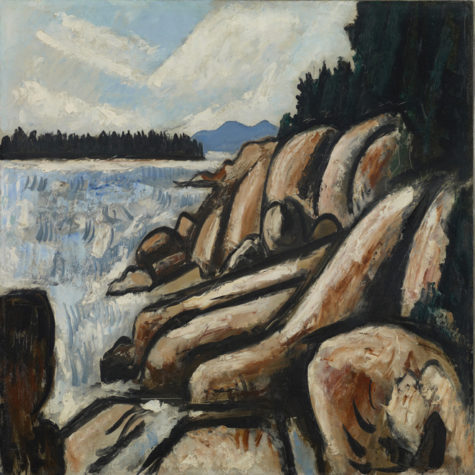 Marsden Hartley (b. Lewiston, Maine, 1877) was a painter, poet, and essayist who traveled the world seeking spiritual and transcendental truths.

He was included in the great intellectual conversations of his day: with Alfred Stieglitz in New York, Gertrude Stein in Paris, and Eugene O’Neill in Provincetown. Inspired by Walt Whitman and Cézanne, Kandinsky and Albert Pinkham Ryder—Hartley went from place to place, experimenting with impressionism, fauvism, cubism, and expressionism. In the mid nineteen thirties, he returned to Maine, where, for the last decade of his life, he lived and worked around Portland, West Brooksville, and Bangor. After losing two close friends, the Mason brothers, Nova Scotia fishermen who drowned at sea—he was bereft and looking to paint the people and landscapes that made him feel whole and grounded. He painted loggers and fishermen, mountains and seascapes. Among them was this view from City Point on the island of Vinalhaven in Penobscot Bay.