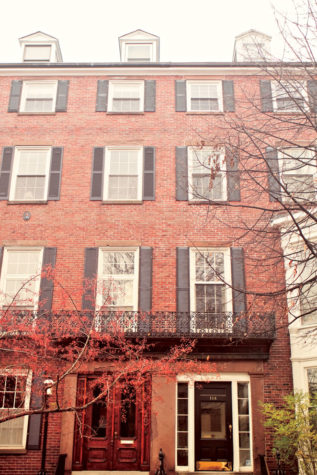 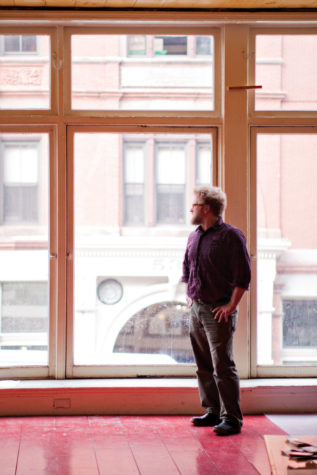 Architect Christopher Campbell in his studio 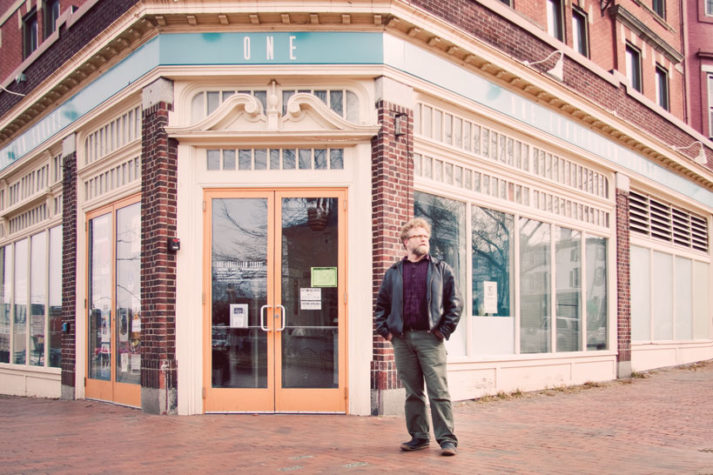 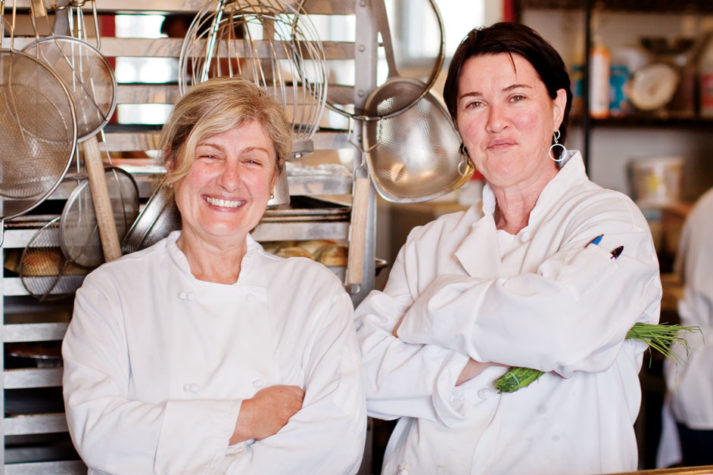 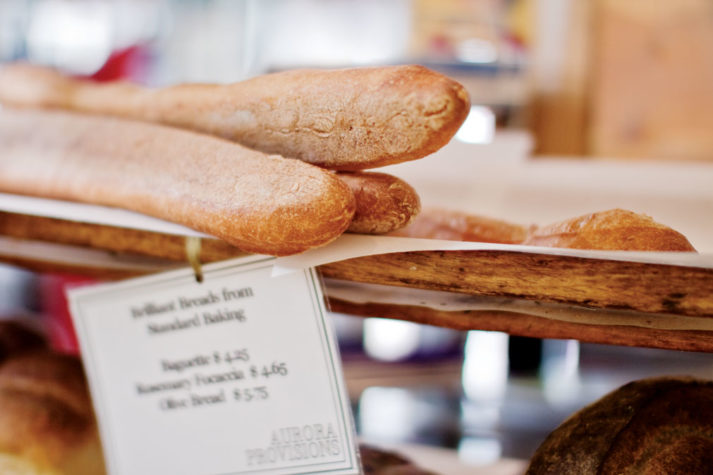 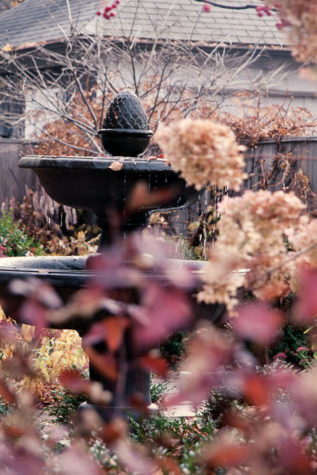 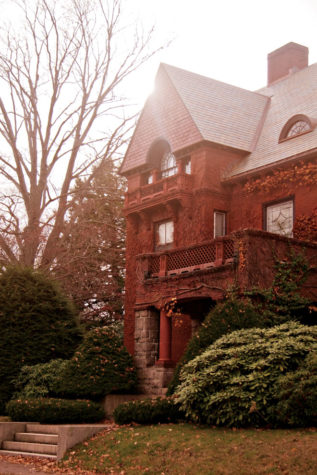 A Colonial Revival house on Vaughn Street. Nearly every other home and carriage house on the street was built by John Calvin Stevens. 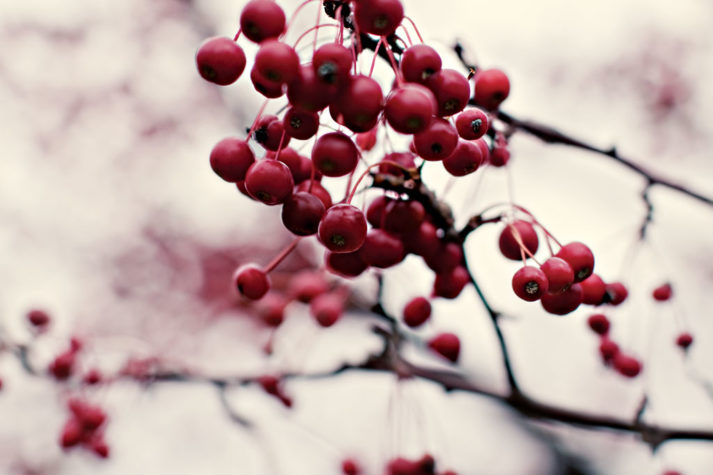 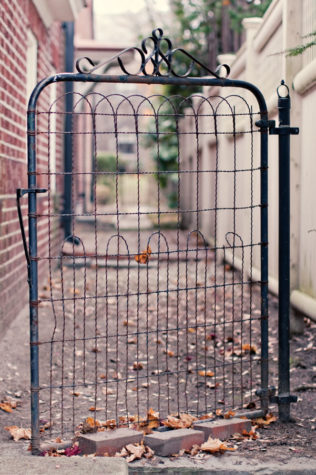 A dreamy gate on a carriage lane. 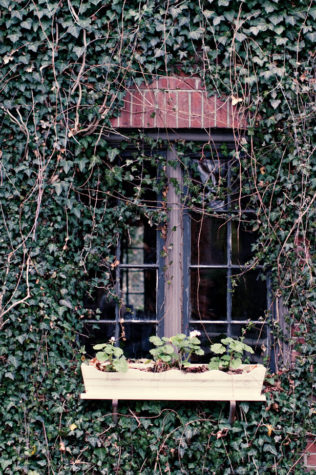 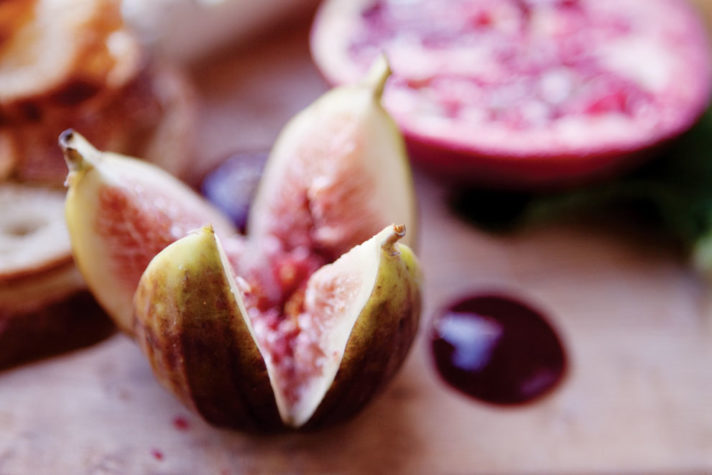 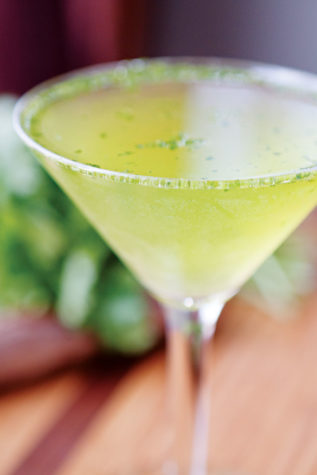 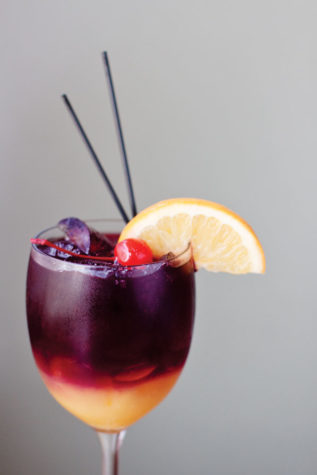 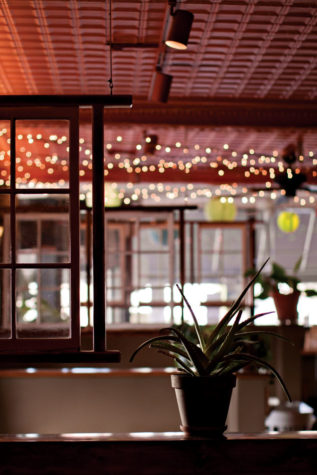 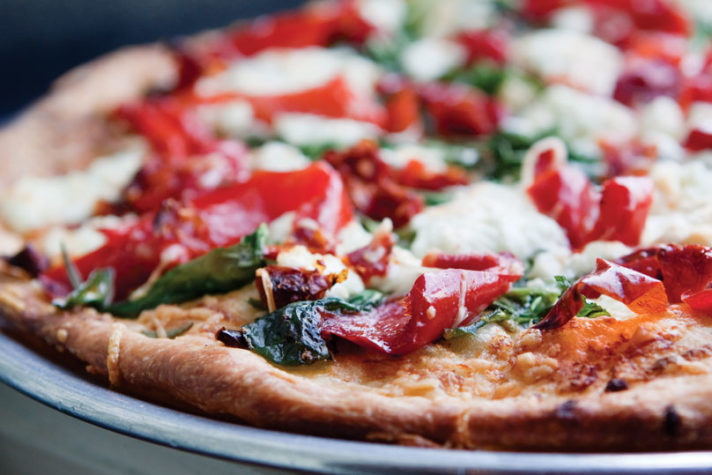 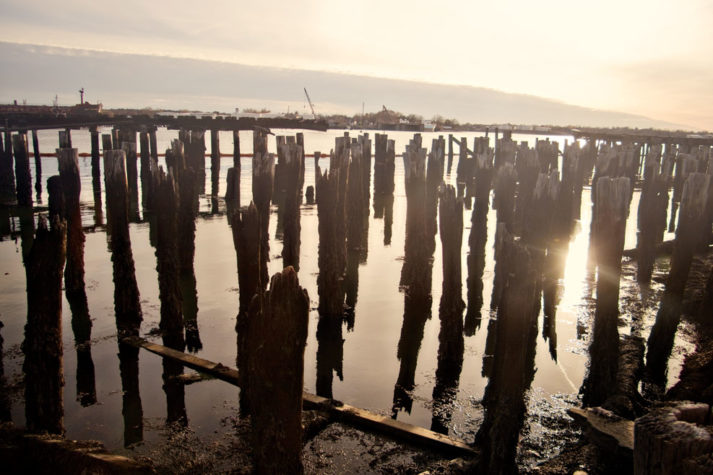 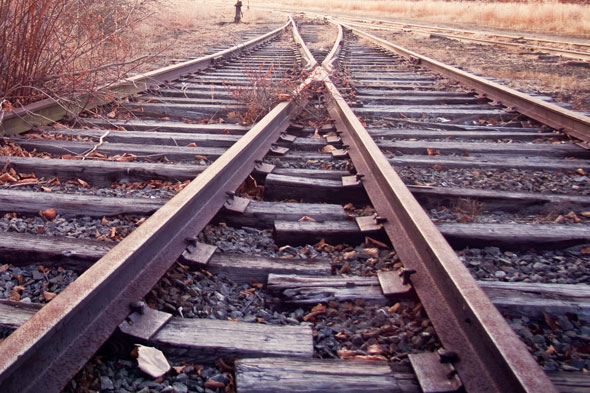 Abandoned railroad tracks and de facto walking path along the mouth of the Fore River on Commerical Street. 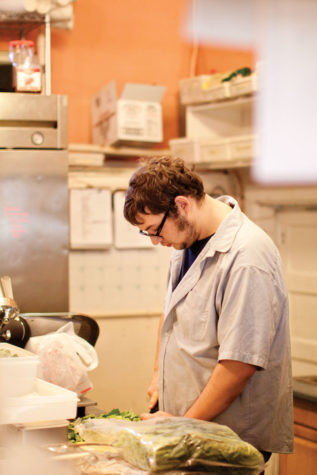 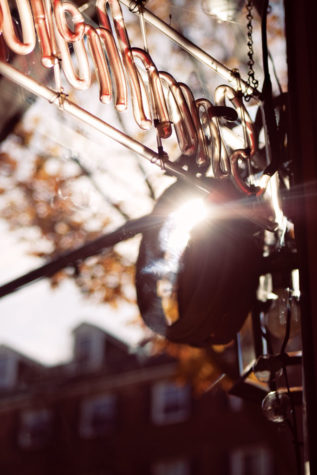 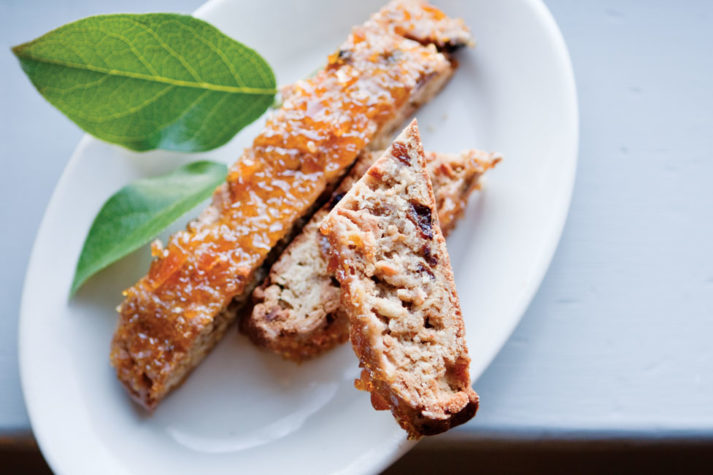 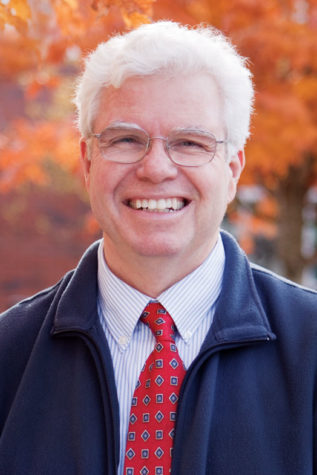 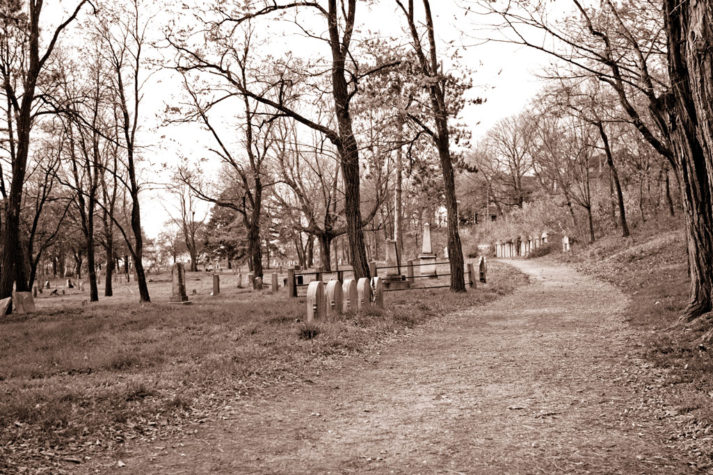 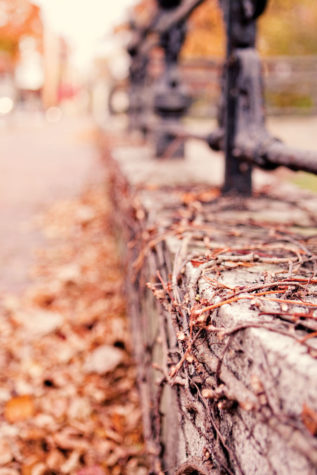 The corner of Spring and Fletcher streets. 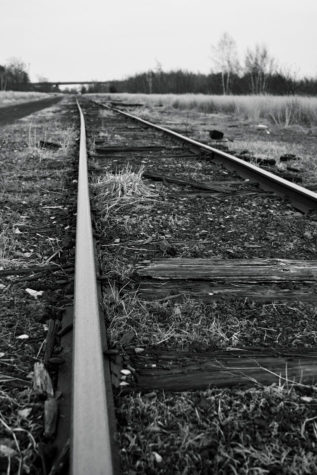 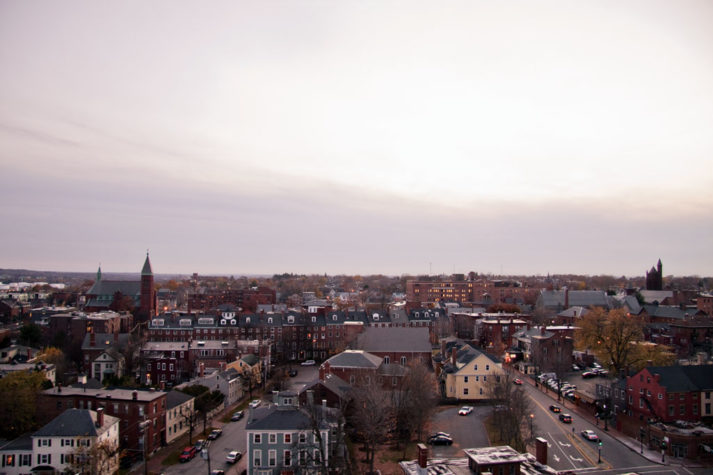 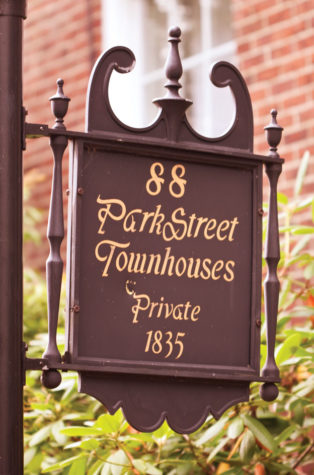 If John Calvin Stevens had his way, his pièce de résistance would sit on Portland’s Western Promenade today. Instead of a bronze of Thomas Brackett Reed, Stevens’s state capitol building (modeled on Brunelleschi’s dome in Florence) would command the view of the White Mountains from the center of the promenade. And since airports aren’t built in view of rotundas, the jetport wouldn’t have been built in Stroudwater. The Fore River might have become a sanctuary. Hospitals might have been government complexes. And the Blaine House would likely be the Leighton House.

But the late-nineteenth-century bid to move the state capital to Portland was unsuccessful, and one of the state’s oldest neighborhoods, remained a neighborhood.

Chelsea Holden Baker spoke with eight people about their experience of the West End.

We moved here in 1959 when nobody wanted these big, drafty houses. We bought our house for $30,000. I had an office in my home and could walk to two hospitals. It was idyllic. Oakhurst Dairy delivered milk and nothing was wasted; we left out garbage for pigs in small cans in the ground, even rags were picked up separately. All around us were wonderful people, like Wadleigh Drummond, who founded Unum. Further down the alleyway, there were the Bennetts, who ran Oakhurst—they had seven kids. Kids were running around everywhere, playing pickup games in the alleyways, sledding in the winter. They all knew the sound of their own dinner bell. The kids really united the community and made it lively, so when they—the baby boomers—grew up, everything contracted. It’s still a lot of the same families, and things look the same—you can still walk to the Promenade and see the Presidentials and Mt. Washington—there just aren’t kids around. The other big difference is Vaughn Street. Before Dutch elm disease hit, the elms along Vaughn were so big that you couldn’t see the houses. When you turned the corner on a summer’s day it was like driving through a tunnel—the temperature dropped. It was the real “Forest City.”

The idea that we share a responsibility to the neighborhood is an important concept. This is a city that lost its beautiful old train station. Up the street, there’s a house that was moved here when the Holiday Inn was built in its place—the neighborhood is sanctuary to a lot of architectural details that are otherwise swallowed up by progress. We’ve been planting trees like disease-resistant elms in the hopes of restoring the high canopy the city used to have.

Although it might be more efficient to build a brand-new school out in a field, kids love the nooks and crannies here, the details that are preserved, secret drawers. The force and speed of culture is fragmenting focus and experience for lots of people. Here, the campus is organized to focus inward. We call the green in the center of school “The Sanctuary”—it can’t be used as a shortcut to anywhere. The idea is to have a quiet, focused center at the heart of an active place.

I aim to make The West End News the community’s paper, to make the community better by delivering news so that people know what’s going on. A few years ago there was a lot of talk about a new high-rise condo going in down by the bridge. The argument against it at the City Council meeting was that its architecture didn’t fit in with the neighborhood, even though this neighborhood has everything from colonials to condos. At the meeting, one of the developers said, “Which building are we concerned that it doesn’t fit with? The one with the airplane sticking out of it?”

That was the old Popeye’s Ice House. The owner of that bar told me one of my favorite stories: A man and his wife from Virginia were in Portland, lost in the West End, when they saw a plane sticking out of a roof. They stopped to look at it and the man realized it was the tail of the plane he crashed in Massachusetts in the seventies. It had been sold as scrap. He had no idea it was there. He was visiting Portland for a flight school reunion and it was just this eerie coincidence . . . The paper is about news, but stories that surprise people are my favorites.

Christopher Campbell | Architect and designer
Campbell is the co-owner of One Longfellow Square and the owner of the Artist Studio building, home to SPACE Gallery. He lives on Danforth Street.

When I moved to Portland I thought this was the fussy side of town where the people might put on the same airs as the architecture. But what this area is all about hit me last winter during a blizzard. We had friends over and for some reason we decided to go for a walk. It was magnificent; the wind was howling and these beautiful buildings were looming in the streetlight covered with swirling snow. You would have expected it to be lonely and miserable, but it seemed that everyone had the same idea. The streets were alive with smiling snow-splattered faces, happy to be
out together.

There is something counterintuitive about the West End to a modern sensibility—the ocean views and the waterfront are to the East and yet the well-to-do from the past built their beautiful homes here, as if to distance themselves from the manufacturing and shipping that made Portland such a vital hub for the Northeast. I can only guess the thinking was to gain cover from the winter winds coming off the ocean. Now, the argument for the West End is the West End itself: a diverse, thriving community of shops, buildings, and people that at every turn ratchets up the livability quotient. I convinced my parents to move here from Philadelphia, and it was a pleasure to show them all they can do without a car.

Andrew Lyman | Web designer and executive director of MENSK
Lyman started an East-West game of “Captcha the Flag” while living on the West End. He recently moved to the East End.

Captcha the Flag started because Portland seemed poised for some citywide, east-west rivalry. The neighborhood pride seemed fairly arbitrary, which is exactly the type of pride that leads to great competition: people will fight, but no one will die for their preference. At the first game, people who had been friends for years were suddenly hurling insults across cardinal lines. The East End won, thanks in part to their brilliant strategy of enlisting school kids to hang out by the flag and chase and taunt anyone who got near it.

We played again in April. West Enders turned out in droves, one group carrying a banner proclaiming, “West End is the Best End!” and shouting “Beast End!” at the opposing side. We had about seventy to eighty people out that day. The East End flag was eventually liberated from North Park. Our flag was also hidden in a park, but was never discovered, because the park can’t be found unless you know where it is [Taylor Street]

—a lot of West Enders don’t even know it. Now we’re in a deadlock and that can’t stand. The next game will be in January or February.

The restaurant is like what a grange hall
used to be. We wanted a neighborhood place, but you can’t say, “This is what I want” and make it happen. The customers make it happen. A lot of people put paper over the windows during construction, but we didn’t. We kept the doors open. Every day we’d say, “It’s going to be a restaurant,” forty times. People would come in with suggestions; they dictated what they wanted, and so by the time we opened, we knew everyone. Financial advisors told us that we should move to expand. Instead, we bought the building. Now we’re putting on an addition and customers are dropping off their phone numbers saying, “Let me know when you’re ready to paint and I’ll come over.” All the workers are from the neighborhood—the electrician lives across the parking lot. The guy that’s doing the framing is the guy who builds the stilts for the Shoestring Theater.

Caiola’s is a family name—for my mother and grandmother, who were fantastic cooks. When we opened everyone would say, “Oh, so you’re related to Mikey Caiola! From the Reiche School!” and I’d say no. But sure enough, Mikey Caiola came over, we started talking, and I found out that my great-grandfather came here from Italy with a brother, who I didn’t know about. My grandfather had all girls and we thought the name died out. If I hadn’t put Caiola’s above the door I wouldn’t know I have family here—and they’re great people.

Jessica Tomlinson | Director of public relations at Maine College of Art
Tomlinson has walked to work every day for the past 13 years. Her husband, artist Henry Wolyniec, keeps his studio in their home. They live on Taylor Street.

We probably couldn’t afford our house today! In the nineties, there was a movement afoot to get owners to occupy their multi-unit buildings. The city was offering the “New Neighbors Program,” for first-time homebuyers to simultaneously become owners and landlords. The financing deals were out of this world: full financing at four or five percent. Of course, all of the designated places were in incredible disrepair. When we moved in, we took out 23 bags of garbage from the backyard. The postman told us that he’d asked to get transferred off our block because it was so scary. In most cities, there’s a sense of transition. Here, the house with the highest valuation in Portland is next door to the projects. But the pace and magnitude of change has been slow—the apple cart is still intact.

The idea that Maine is one thing can be dispelled in a short walk through the West End. For example, you have the most elite school in the state, Waynflete, three blocks away from the most diverse school in the state, Reiche. And the accessibility is incredible. I walked home from a meeting at City Hall one night and ran into both of my councilors. My walk to work is 15 minutes, but my husband jokes that I have the longest commute in the city because I’m always stopping to talk. I have friends who loved the West End, but as soon as they had kids, they wanted a lawn in Falmouth. It’s like you have the biological clock and then you have the suburban clock, but I hit the snooze button on that. Our son, Otto, is 8 years old now and our lawn is the pocket park across the street. I always wanted to live in Mr. Roger’s neighborhood and I got my wish.