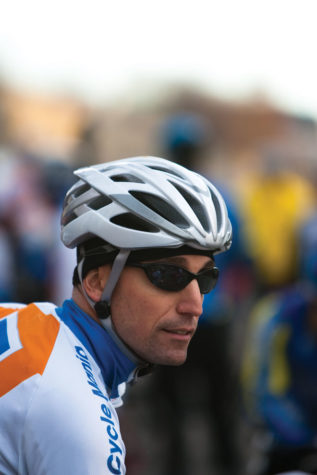 Sean Steadys legs tend to be more clean shaven than his early-morning face. 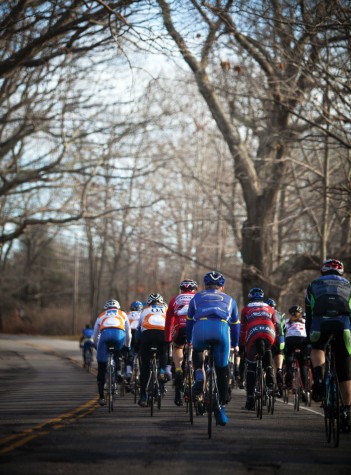 The fast pelaton, the tight pack of cyclists, heads to Prouts Neck. 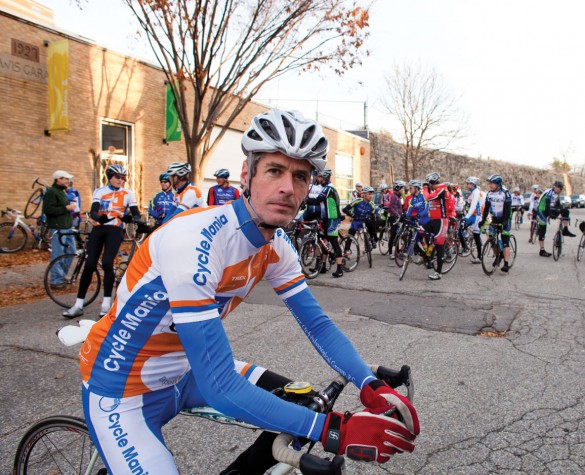 My loyalty to the team steps up my own interest in riding better, says Eric Larsson, an OA/Cycle Mania masters team member. 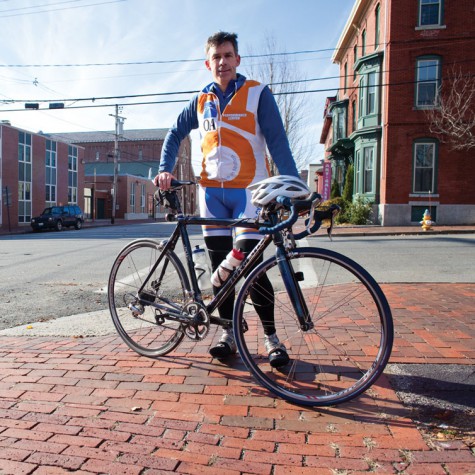 Daniel Landy, MD, says cyclists crave sleep for a reason: it promotes the formation of natural human growth hormone, which, in its synthetic form, is considered a doping agent. 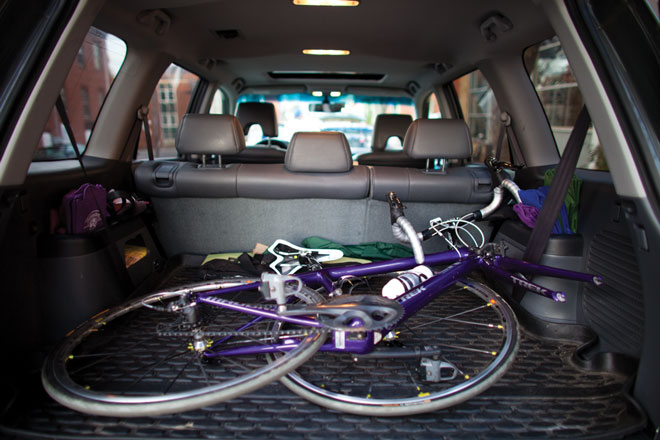 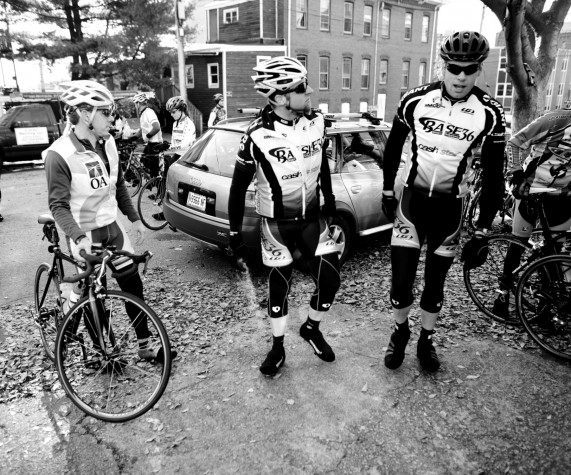 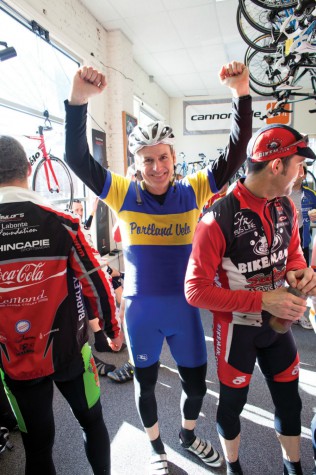 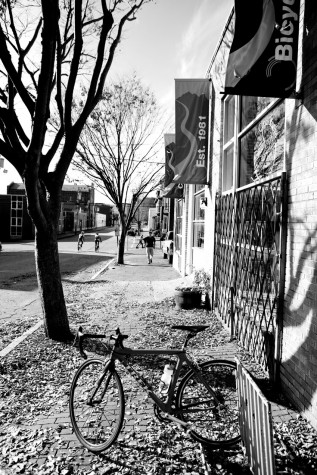 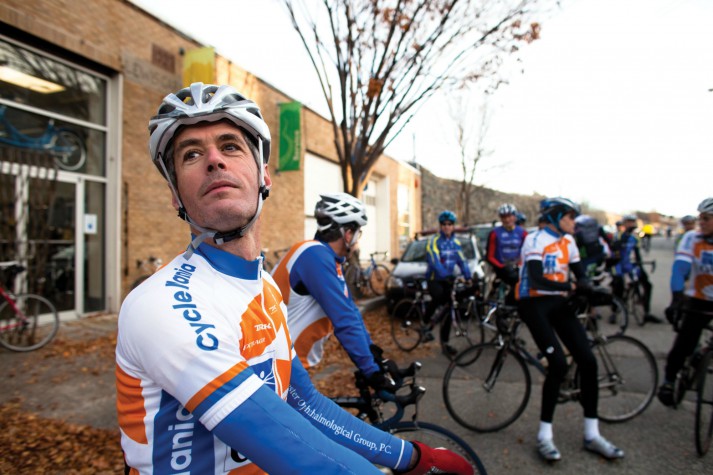 They shave their legs. Coffee is their sports drink. They sleep a lot. Daphne Howland hit the road with a group of serious cyclists in their 40s and 50s who have taken New England cycling by storm.

On one of the few bright days in an otherwise wet, doleful spring, anticipation was riding high. Six dozen lean, mean racing machines straddled their bikes, all eager to get back on the saddle after an off-season of Nordic skiing, of battling snow and ice with studded tires, or of just being trapped indoors at home, bikes grounded on stationary trainers and hooked up to power meters to chart the winter’s progress.

Every year, the Michael Schott Memorial Circuit Race in Marblehead starts off New England’s cycling season. In 2009, the riders waiting for their events couldn’t help but notice that many riders from Maine were, for the first time, all wearing orange and cerulean blue.

Most American cycling clubs, whether purely social or established for racing, are affiliated with the local bike shops that sponsor practice rides and provide uniforms, expertise, and coffee. Cycle Mania, just off India Street in Portland, has run the Portland Velo Club since 1979. The club sponsors the state’s largest competitive practice ride, the Saturday Morning Ride, which starts in March, snow permitting, and culminates in the icy pre-Thanksgiving Doppio Ciclo. It’s a 25-mile-an-hour circuit, including four challenging sprints from India Street into Cape Elizabeth and back. Spokes start blurring at 7:30 a.m. sharp. Finish tying your laces at 7:31 and you’ll be left staring at the backs of 75 fast-disappearing pairs of Lycra shorts.

The PVC has attracted several serious riders. Many are masters, that is, 35 and older. Until last year, the masters riders had entered as individuals, winning, placing, showing, and riding here and there around the region and the country. In 2009, Cycle Mania owners Eddie Quinn and David Brink believed the masters-level riders in the club, rounded up as a team, could be formidable, and approached Orthopedic Associates (OA)for sponsorship.

The masters’ athleticism is unmistakable. Even the slightest riders have muscled legs and bulging calves. Only the white streaks under the helmets (for those wit
h any hair on their heads) belie anyone’s age. “Don’t let the gray hair fool you,” says Tom Murray, MD, a cyclist and an orthopedic surgeon who sponsors the OA riders, “Those guys are monsters.”

Many of the riders have high-power jobs and careers. In younger days, many were athletes in other sports. They took up cycling as the only athletic pursuit copacetic to worn knees or hips. But make no mistake: age is hardly an impediment. Age may even provide an edge.

“In cycling, with smart training, with attention to recovery, you can still improve as you get older. I’m able to maintain power and speed, and to improve, despite the fact that I’m 48,” says Daniel Landry, MD, a pediatric anesthesiologist at Maine Medical Center and chairman of Spectrum Medical Group. Landry says older riders are smarter riders. “And a smart person, a strategic person, can do better than a person with pure endurance. The good guys in a bike race always go with the right break.”

The OA Performance Center / Cycle Mania Masters Cycling Team won the Marblehead race, their first, and immediately shook up the New England scene. Their depth of talent and individual willingness to support the strongest man—the sprinter, climber, winner of the day—enabled them to plan coherent strategies and contingencies. Working as a team, they could not only make significant moves that adapted to the course of the race but also could change the entire game. “Suddenly, they were my primary competition,” says Doug Jansen, team leader for International Bicycle / Global in Pelham, New Hampshire. “For most road races I show up at, I’m a contender. When OA shows up, it’s like, ‘Oh, man.’”

An unassuming gray Trek Madone road bike stands on the Cycle Mania floor. It’s recognizably a bike, its basic frame and derailleur system is essentially the same as any in the shop. But, featherlight at 14 or 15 pounds, depending on the wheels, hand-made of carbon fiber and no metal, and priced at around $10,000, depending on the details, it is an elite racer’s machine. Some half-dozen of the OA masters riders own this bike. “It will give them an edge, a small edge,” says Quinn. “But it’s not any bike that makes these guys good.”

The pack of cyclists in a serious ride or in a race moves organically, the white noise of speedy wheels whirring like insects, the blur of colors on jerseys like smudged paint. The OA masters team is on their bikes again for the season, all set to smear the cycling landscape and make the dominant colors orange and cerulean blue.

Voices from the Road

I ride year-round. I bike around Maine—in the flat areas and hills, around wonderful scenery and ocean—but it does not inform my paintings. I bike just because I like it, and if anything, one balances the other.

On a bike, you can shoot the breeze with people. It’s not as intimidating or threatening, and through those kinds of encounters, you make a lot of arrests. Although we can’t transport our own arrests, obviously.

I love bicycles. They’re beautiful to look at. So is the form of people pedaling. Everyone has their own gait and style. When I’m riding my bike I can think thoughts I wouldn’t ordinarily be thinking. It’s meditative. Racing is only one facet of the bike culture. There are the people who commute day in and day out. I have quiet pockets of friends who are essentially their own bike clubs. They could rip the legs off our local racers but they choose to ride in a more laid-back manner.

Because you’re going all out, and it’s an aerodynamics game, you have armrests in a time-trial bike, you ride crouched down, like a speed skater. You are going hard for thirty to fifty minutes, averaging by yourself somewhere between 23 and 30 miles an hour. They call it “the race of truth” because it’s all about your ability to sustain your all-out power for an hour.

Cody Harris
Competitive road racer for Base36, a men’s, women’s, and junior’s team, and mountain cyclist, saleswoman, and buyer at Gorham Bike and Ski, Portland

Often the women’s race is not very long or competitive, so a lot of the better women cyclists will opt for the men’s race. Men tend to be safer riders because they have more experience in races. They don’t make as many sudden movements. Everyone follows the unwritten rules of the road, and the overall unwritten rule is to avoid a crash.

As a mechanic, I could be working on a three-speed from the Seventies or a new bike with electronic shifting. In some ways, the bike hasn’t changed a lot in the last hundred years. I just love bikes, and riding a lot, you really become sensitive to the problems that bikes have and get to know how to fix them. A lot of my riding now is really early in the morning. I ride five days a week, through the winter. I commute from South Portland, throw a rack on for grocery shopping. We’re a one-car family. I grab my bike on a weekend for a 60-mile ride. My 8-year-old has a 16-inch, and we also use a Trail-a-Bike and can do longer rides together that way.