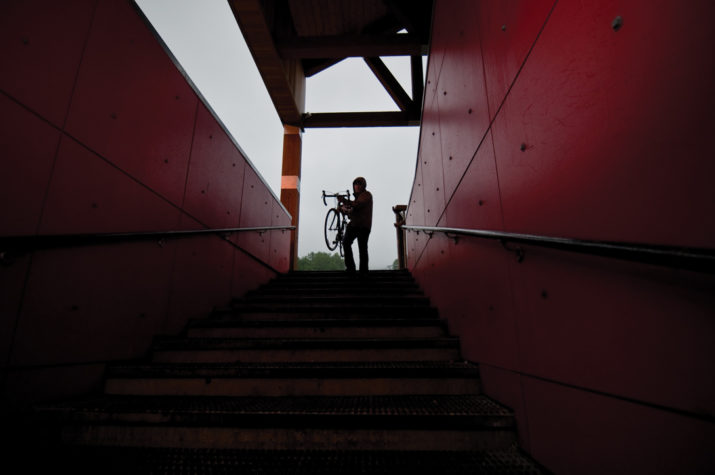 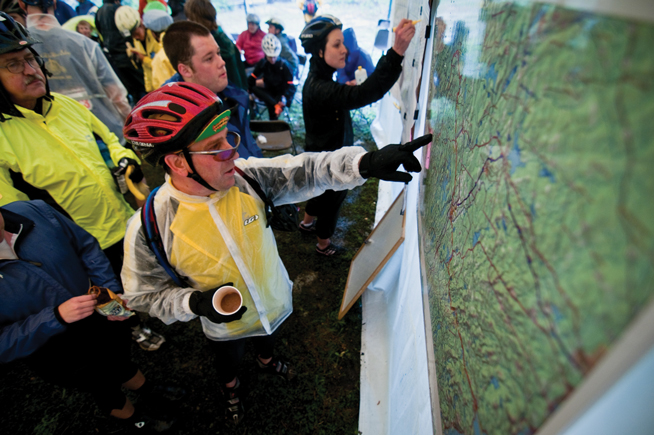 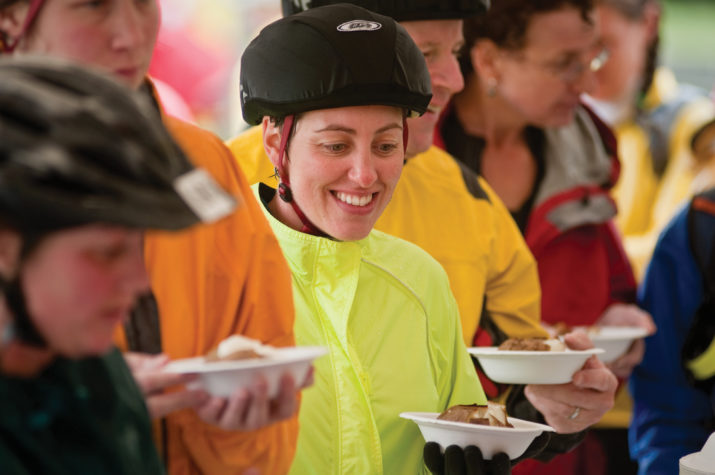 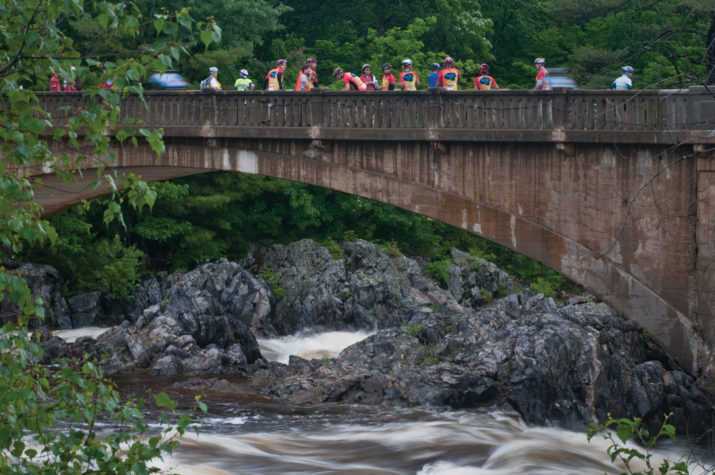 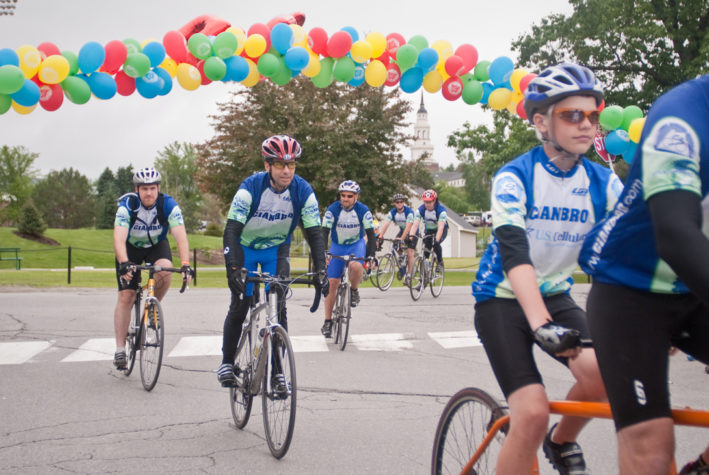 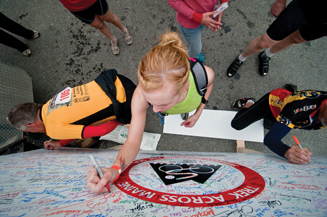 Signing the ride's board 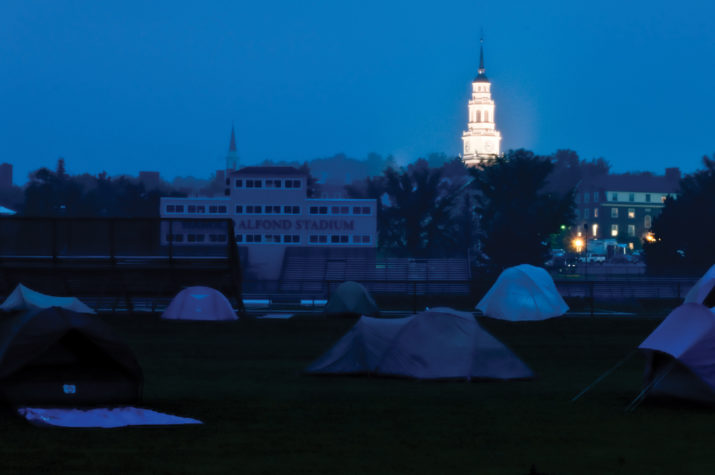 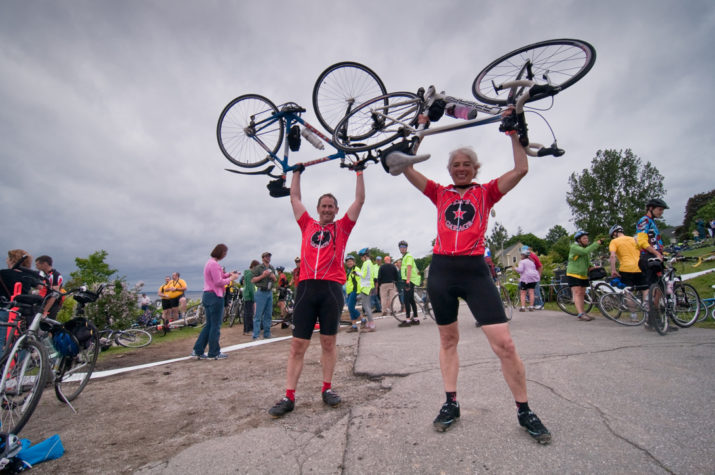 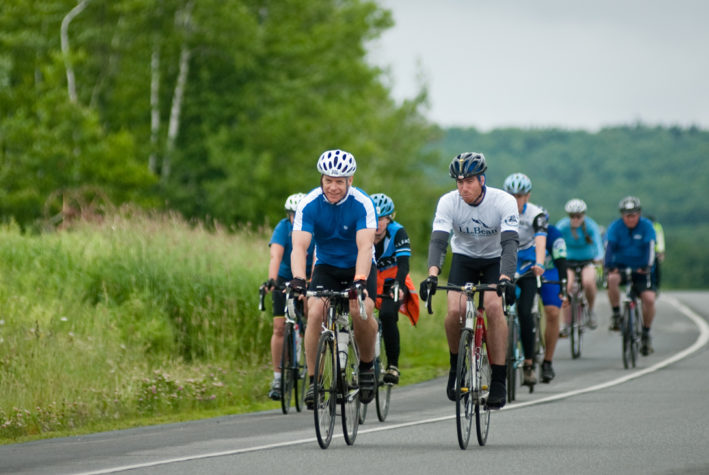 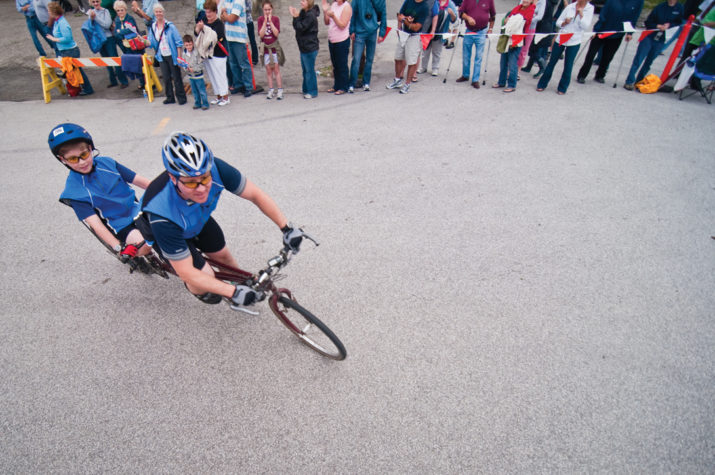 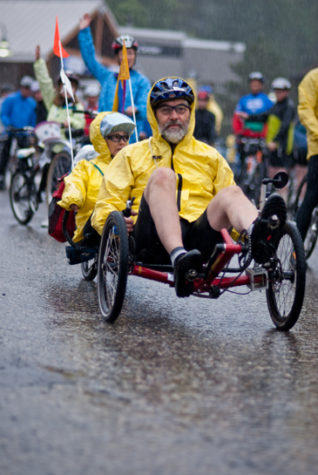 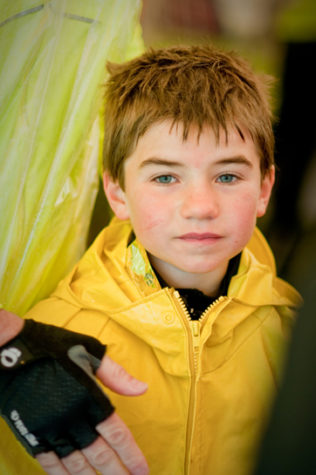 Even the rain can't wash away the fun for all ages 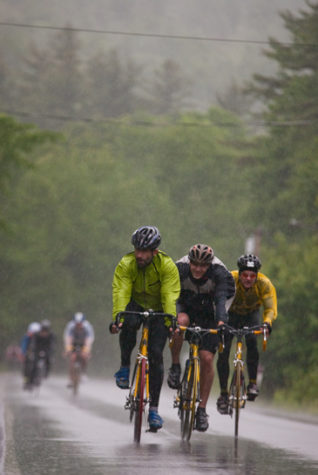 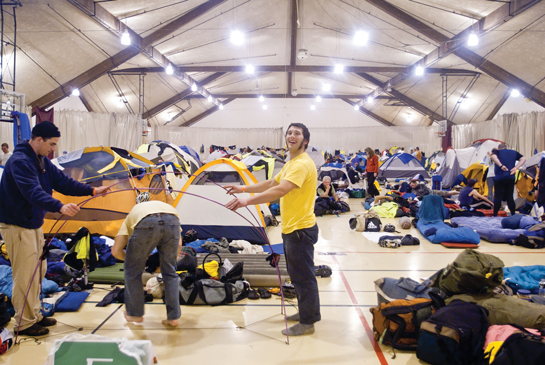 Camping out inside the University of Maine at Farmington fieldhouse 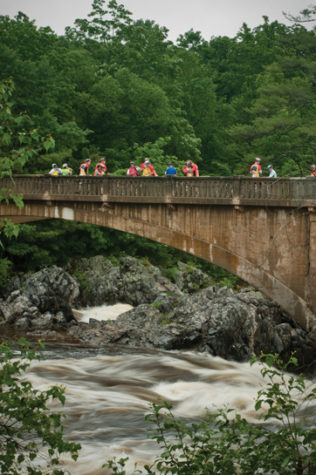 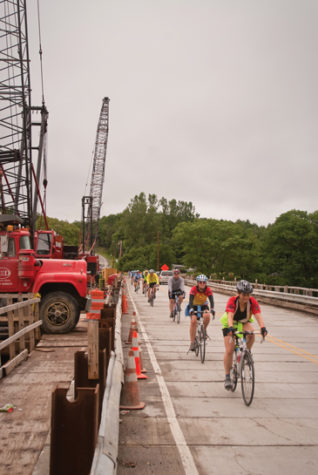 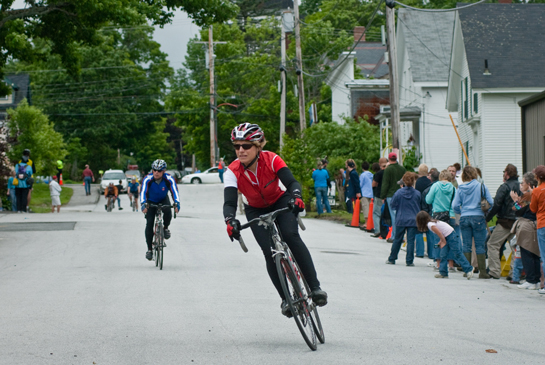 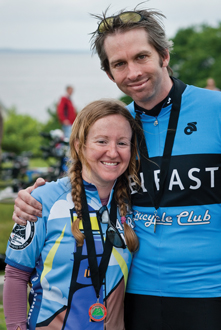 FEATURE-June 2010
By Peter A. Smith
Photographs by Karsten Moran and Adam K. Macchia

The Trek Across Maine is a Father’s Day fixture, winding from Sunday River to the sea. The relaxing ride from Newry to Belfast starts on June 18.

The trekkers wake up early, slip on their shorts, and leave Sunday River, as early as 6:30 a.m., descending a foggy, cool stretch of two-lane roads. They ride along the Androscoggin River, over skid marks and frost heaves, past logging camps, through Rumford, Weld, and Wilton. Rain or shine. The rollers between Weld and Wilton are pretty tough, especially that five-mile stretch outside of Weld, where teams sing songs to will themselves and their Treks and Cannondales up the largest hill of the ride—I think I can, I think I can—when their legs are stiff and tired and about to give out and they wish they had trained more—and the black flies!—and Oh, I think I can.

By nightfall, the clumps of neon riders trickle into the University of Maine at Farmington and set up in dorms, in campsites, or inside the field house, where the lights go out at 10 p.m. On Saturday, cyclists loop up through New Vineyard, North Anson, and Norridgewock. Some stop to cool off in the Messalonskee Stream. Day Two ends at Colby College in Waterville, where they scarf as much pizza and grapes and carrots as possible. 49 miles to go. The next day is a blur, until the plateau, three miles outside of Belfast, where Penobscot Bay comes into focus. Then, the peloton descends into Belfast’s Steamboat Landing, where riders polish off the weekend with a barbecue.

“A lot of people gain weight. We call it the Eat Across Maine,” one local teacher told the Morning Sentinel in 2008.

The three-day trek­—180 miles, dozens of chicken barns, hundreds of hills, inner tubes, and lube—has been called the state’s “biggest family reunion,” and it’s been called the “best ride in Maine.” You don’t even have to wear Spandex. The weekend is about connecting with other riders, taking in scenery (and the bars), and raising lots of money. Cycling takes a backseat to fundraising. It’s a breath of fresh air.

This year, the event is expected to raise more than $2 million to support Lung Association research, education, and advocacy—about 60 percent of the Northern New England group’s annual funding. The association was founded in 1904 to fight tuberculosis and has since focused on smoking cessation and reducing the exposure to secondhand smoke, pesticides, and air pollution. Many riders have a stake in the fresh air; they ride with asthma, chronic obstructive pulmonary disease, or other lung disease. Some riders opt out of cars for the weekend; 800 of them take the bus to Sunday River.

The trek started in 1985. Riders were equipped with a map and a good-luck-see-you-at-the-end attitude. The trek was rustic. If your derailleur broke, you had to wait. There was only one mechanic. Meals were out of pocket. Nightly accommodations weren’t fancy. It has since grown—through word of mouth, through Facebook posts and email blasts—into a financial lifeline for the Lung Association.

The pledges come in from sponsors and individual riders. There’s usually a team of teens from Biddeford. There’s fathers and sons, couples on tandems, triples on a single bike. A couple of years ago two competitors trained on mountain bikes at a U.S. base in Afghanistan. The Kennebec Savings Bank, which serves cyclists at its drive-up windows, sponsors a team called the Loan Rangers. L.L. Bean’s team has over 100 riders. There’s Different Spokes, Wheezers & Geezers, Hooters on Scooters, Soft Money Pedalers, No Biker Left Behind, Sore, Butt Still Pedaling, Pumping & Grinding, Trekkers Without Training, and Holy Spokes.

Riders keep coming back for more. It’s common to find ten-timers. One testament to the dedicated ridership can be seen in the local obits. (“Kenneth Clegg was a member of the Sanford law firm of Bourque & Clegg. He never missed the Trek Across Maine.”) Another sure sign of the dedicated ridership: the Magnificent Seven, seven people—six riders and one volunteer—who have been a part of every single trek.

To register to ride or volunteer: biketreknewengland.org

VOICES FROM THE RIDE

Chip Noble
34 | Gray
Product and design manager at DeLorme, rides Specialized Allez Elite with twenty pounds of GPS equipment
This will be my sixth year riding the Trek although I missed year four because my daughter was born two weeks before the ride. She did make an appearance at Colby Night to cheer on Team DeLorme. My story is tied up in our sponsorship of the Trek, the maps that I make for DeLorme, and my crazed efforts to build a team that will someday be larger than the Loan Rangers, my archrivals during Team Recruiting Week. There’s a shameful lust of the Winner’s Circle Jersey tossed in there too but I’m not proud of that and have only tasted victory once in my five years… not counting the clerical error when they allowed me to keep it after I tried to return it.

Brian Dietz
47 | Cape Elizabeth
Co-owner of Portland Financial Planning Group, rides a Lemond Tourmalet
What stands out in my mind is the great diversity of conditions. Some years, it’s bitterly cold and rainy. Other years, it’s blistering hot and people are dropping from the heat.

I love bicycling, but I do very little training. The bulk of my riding happens while I’m on the Trek. Another reason why I’ve stayed committed is that the ride is a great way to get out and do something I wouldn’t otherwise get to do. I believe in giving back and the trek is a great way to support a great organization.

I just keep coming back for more. The last two years, my oldest son, Charlie, has joined the
Trek. That has made it more of a family effort
so it’s been a real father–son bonding experience.

Tracy Davis
45 | Bath
Principal designer at Urban Dwelling, rides
a Trek Pilot
The Trek is such a spirit-filled event, everyone participating for their own reasons. There is so much camaraderie and support from the staff, housing providers, neighbors, passersby.

On the sunny days, you’re just amazingly thankful to be present and mindful of why you’re riding. When it’s cold and rainy, you’re just riding your heinie off to the finish to get warmed. In either case, it’s an invigorating experience and a way to remember the people in our lives who have passed away due to these illnesses. My maternal grandmother died of lung cancer and she’s with me on this ride. It’s in her spirit that I participate in the Trek across Maine time and again.

Sam Mitchell
56 | Belfast
Realtor with Town & Country, rides an
Aegis Aro Svelte
I was a long-distance runner for a couple of decades. By your early 40s, your body is just tired of running, even though in your mind you’re a runner. A lot of my friends had started bicycling, and I just resisted bicycling because it’s too expensive, it’s mechanical, it’s dangerous, and I was a runner.

One year, a couple friends said, “Why don’t you come down on Sunday when we come in?” And I said, “Great.” I went down early to the Samoset Resort and it was a spectacular day. I got there about, at 10 or 10:30, and they said they wouldn’t be in until noon, but I went early. And I got caught up in the camaraderie and all the good, healthy people who are doing a good thing. And I signed up for the Trek for the following year before my friends even showed up. I didn’t even own a bicycle.

Now, riding has largely replaced running. And what I love is that I ride with same group of people I’ve been riding with for 16 years.

Vern Cook
55 | Hallowell
Hospitality professional, rides a
Santana tandem
My wife, Betsy, and I completed the Trek Across Maine on a tandem bicycle five times. The first four years were soakers—it rained every day or nearly every day of each ride. We spent our 28th wedding anniversary night camped out on twin cots across from each other in a Trek dorm. And to add insult to injury, that night at dinner, a couple we met was singing the praises of the warm, dry hotel room with fresh sheets and a Jacuzzi bathtub.

So, why did we keep doing it? Several reasons, all inherent to the Trek: it’s a formidable challenge, supported by an incredibly positive group of fellow Trekkers and volunteers. And, each year we figured the odds favored good weather—after one-two-three-four rainy years—it just can’t rain again. Can it?

Nora Healy
39 | Freeport
Associate at Verrill Dana, rides a Specialized Dolce Elite
This year will be the sixth time that I’ve ridden the Trek. One of my most memorable experiences came on last year’s ride. When I’m riding, I often find myself doing some deep thinking. On the second day of the Trek, I was thinking a lot about my brother, who is an Afghanistan-Iraq veteran, and the economic recession. It was towards the end of a rainy ride, and as I was cranking up a hill, and older gentleman in a suit was standing on the side of the road cheering on riders. He looked like he had been out there all morning, and as I passed him, he shouted out, “This is what keeps America strong.” I actually started to get a little choked up, but powered up the rest of the hill and made it through the end of ride. That man probably didn’t have any idea that his cheer would make such an impression, but I won’t
forget it.

Bill McKenna
59 | Augusta
Paramedic with Delta Ambulance,
long-time volunteer
For years, I’ve been a motorcyclist. I don’t pedal. Back when I first got associated with the Trek, I think they had 300 or 400 cyclists. The medical team would patrol the route, looking for people who might have gotten hurt. We’ve had some accidents. Some years, there’s almost nothing to do. Generally, that’s modulated by the weather. A hot weekend will cause heat-related injuries. One year the pavement was 106. It’s always better when we have nothing to do. We like it that way. We’re in the ambulance. We’re not looking for extra business. It’s part of our community outreach. We’re looking to ways to help people take care of themselves. Our goal is not to find a cyclist who cannot continue; our goal is to find someone who needs help and to help them finish.