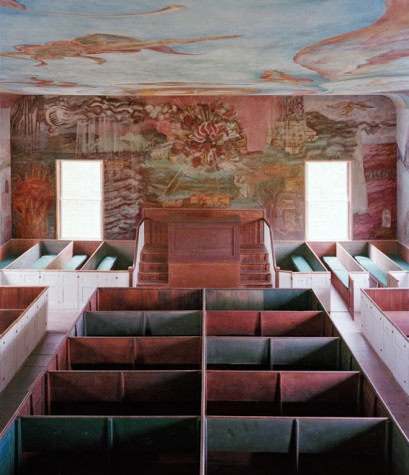 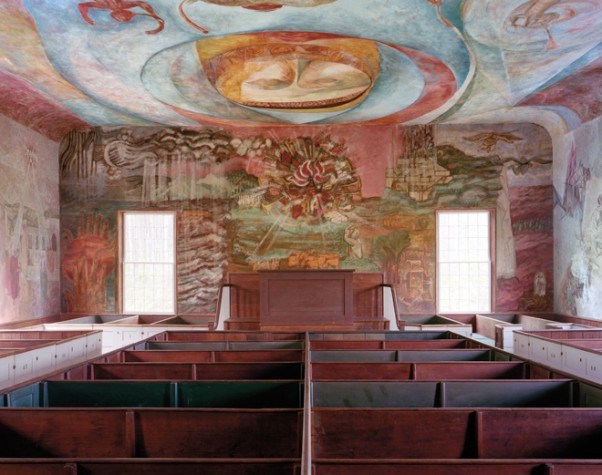 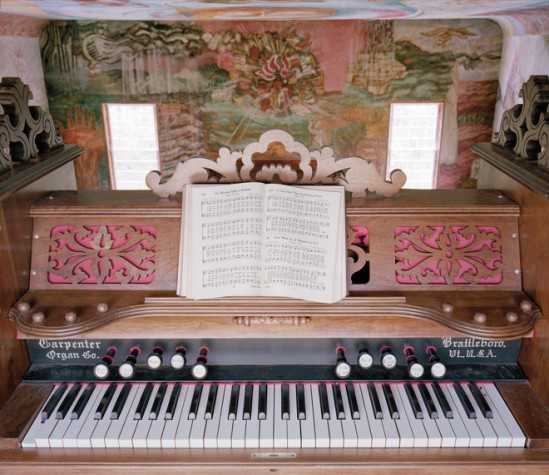 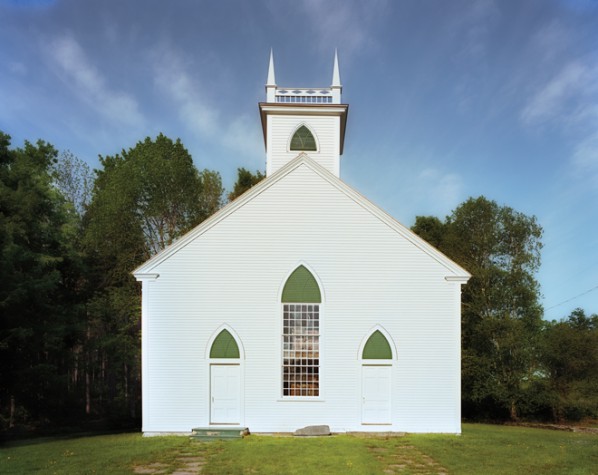 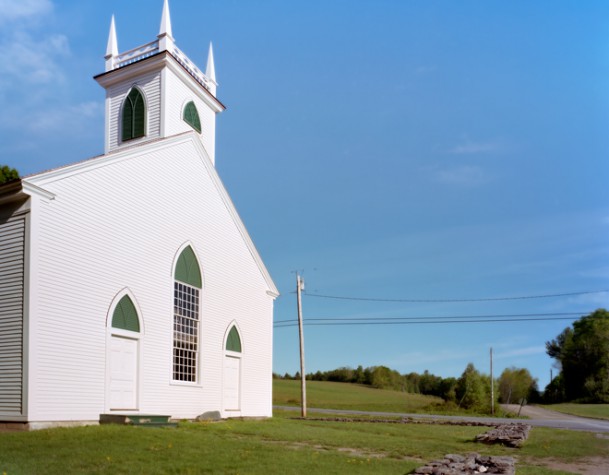 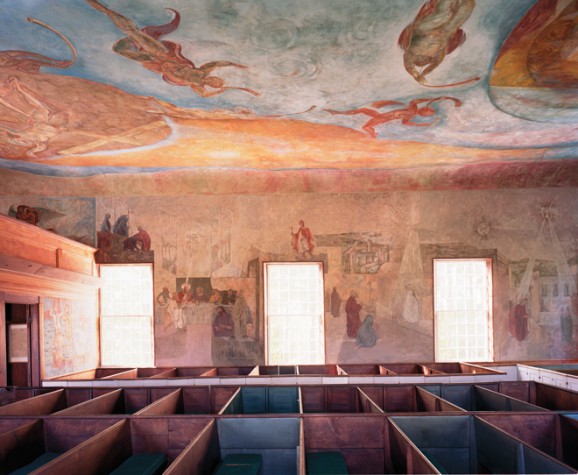 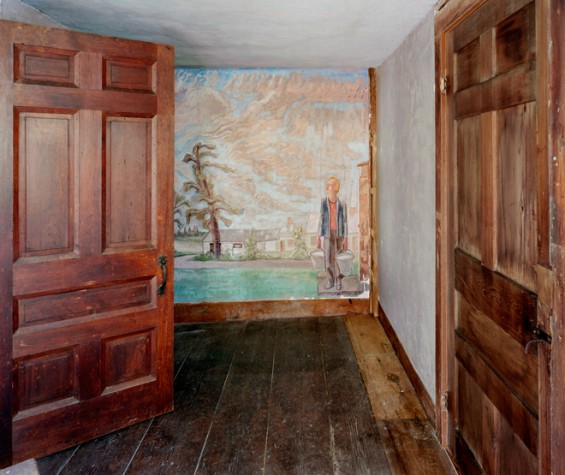 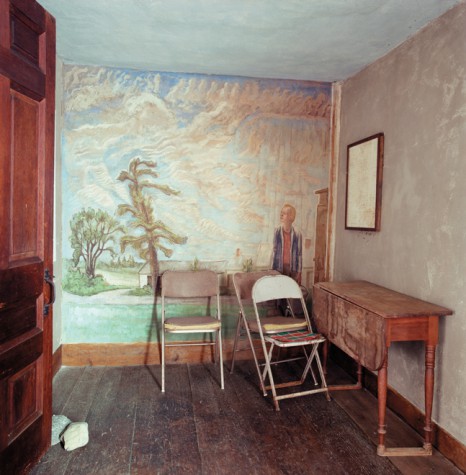 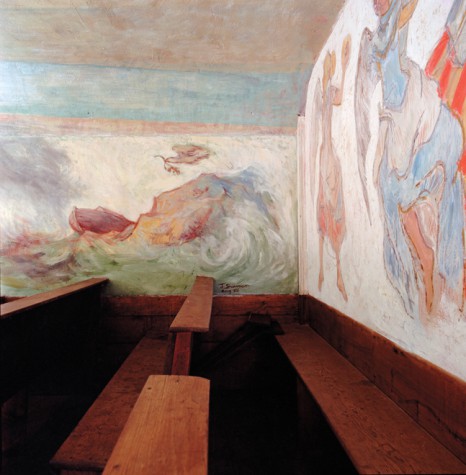 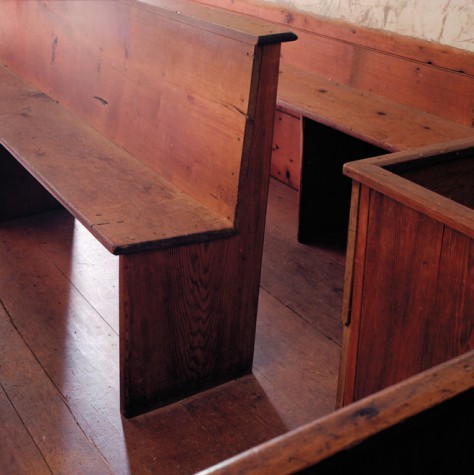 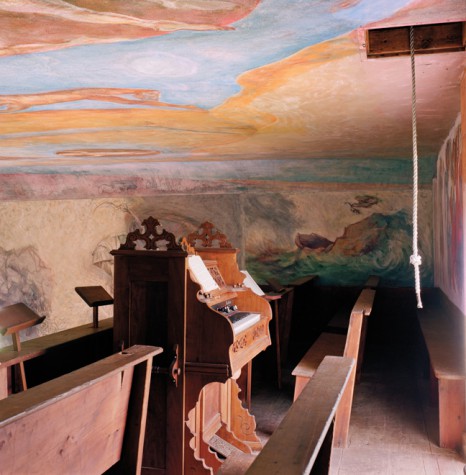 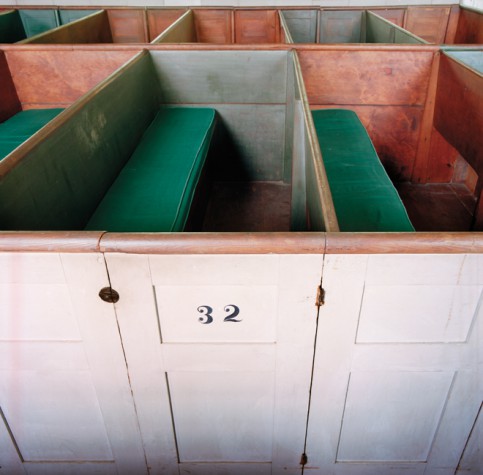 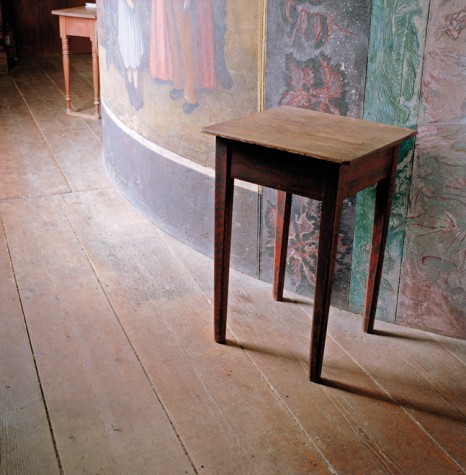 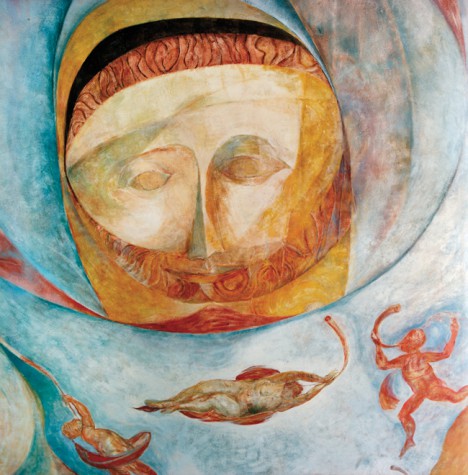 The South Solon Meetinghouse continues to exist in its beautifully casual state thanks to the South Solon Historical Society, which has diligently worked to fund its repair and restoration. For details about the buildings history or to contribute to its upkeep, write to P.O. Box 894, Skowhegan, ME 04976.

A Meetinghouse of Artistic Visions

Today’s cloudy spring light filters through the windowpanes of the South Solon Meetinghouse, illuminating the hundreds of dried-up flies and ladybugs that litter the sills and pews. They look like the same insects that were here the last time I was inside this building. Possibly they are.

A car with a bad muffler roars past, then dies into silence. Now there is no sound, except for Tom rustling against his camera, except for the robins chortling in the trees that quiver outside the window. The building emits an intense stillness, a silence of the sort that humans often find difficult to bear—as did the fretful visitor who once carved an exasperated “Ha” into the pew in front of me. My sons, too, felt compelled when they were younger to fill the room with noise: to drum their heels on the echoing floorboards, to tap the mute keys of the miniature organ, to lean precipitously over the rail of the choir loft and shout, “Hello, hello, hello!” Something about this room both invites and quells dissent.

The meetinghouse dates from 1842, but it feels much older, as if John Milton were rubbing his spectral eyes, as if the ghost of Cotton Mather were staring me down from the pulpit. It’s a modest eminence, this brown pulpit, yet it’s grim. A Puritan asceticism also overlies the white pew boxes, each with its tidy numbered gate and brass thumb latch, each with its own hard green cushion on a wooden bench that’s as rough and dry as an old tortoise. The building rests here on its thin lawn—a white-clapboard box, its pair of front doors perpetually unlocked, tucked beside a sparsely traveled intersection. Nearby stand two quiet houses, a hayfield, a grove of maples leafed out in tender yellow-green.

Over the years, Tom and I have visited this building with sporadic regularity, most often with our parents, children, or friends from college in tow. Rural Somerset County has a limited number of tourist options, but the allure of this one has been constant and reliable. It feels like a place that has never changed, that never will, though indeed it did change once—drastically: in the 1950s, artists from the Skowhegan School of Painting and Sculpture began decorating the meetinghouse with frescoes that now cover nearly every inch of wall and ceiling space.

Founded in the mid-1940s, the Skowhegan program was linked to the aesthetic movement known as the New York School, whose associates included painters such as Ben Shahn, composers such as John Cage, and poets such as Frank O’Hara. In other words, its devotees possessed an urban vision, and that collision between hip New York City and prim rural Maine have transformed the South Solon Meetinghouse into a strange, almost otherworldly place. On one wall poses a triad of etiolated camels; on another a chaos of trumpets. On a third wall, Christ is sipping wine at the last supper, a thick ray shooting from his halo like spray from a fire hose. If these sound like amusing descriptions, the overall sensation is not, in the end, comic. Rather, it feels Blakean, not so much in its visual style but in the juxtaposition of riotous mythological grandeur and the stillness of the aged, upright pews.
I have no idea what might have driven a handful of artists to superimpose their magniloquent vision on this dour little meetinghouse. But when I look at these busy walls, this looming, ambitious ceiling, I can only wonder: “How did they get away with it?” Clearly their paintings were planned; these enormous, semi-abstract, ponderously symbolic murals aren’t graffiti. Nonetheless, something about them feels like graffiti, as if they’re thumbing a nose at Mather and Milton, as if they’re tempting fate and asking
for trouble.

Yet they also feel secondary to the room itself. For despite the sheer size of the frescoes, their bright colors and impudent shapes, the building itself remains unmoved. Time travels on, following its allotted way. The floorboards sigh. Dust motes sift in the cloudy light, and I, instead of looking up at the murals, more often find myself looking down at my own work—roughened hands, the pew in front of me, the haze of pale sunshine filtering through the windows. Meanwhile, outside, among the maples, a nuthatch pipes its plaintive nasal song.

I don’t mean to suggest that the frescoes lack power. Not at all: their peculiar majesty looms—audacious, overwhelming, omnipresent. But the meetinghouse itself doesn’t retreat. It’s as if the bare floors and scarred pews are casting their own ironical glance at these dancers and trumpets swirling among the blues and reds and golds.

And then the building shrugs.