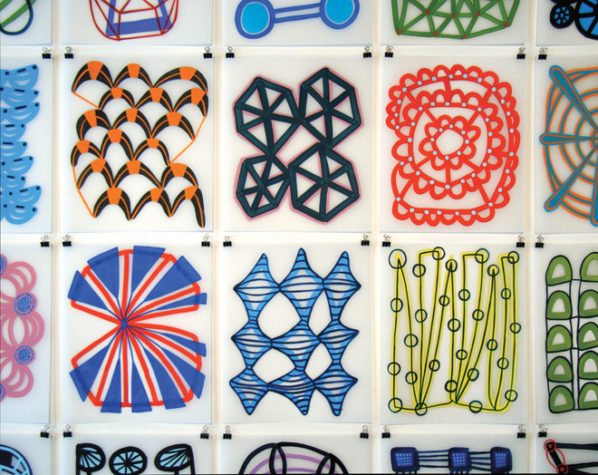 Cassie Jones grew up in Princeton, New Jersey, and studied art at Bowdoin College. She lost her heart to Maine and came back to Brunswick in 2008 after earning a degree in painting at the Rhode Island School of Design. “I love the community of artists here,” she says. In two years her career has taken off, beginning with a solo show at Coleman Burke Gallery in New York in 2009. Last summer she had her second solo show at SPACE Gallery in Portland, participated in a group show at Aucocisco Galleries, and was included in the 2010 Center for Maine Contemporary Art Biennial Juried Exhibition. Her beguiling work—bold patterns and bright clashes and harmonies of color, painted with acrylic on translucent Dura-Lar—glows with energy and disciplined curiosity. A single rectangle may appear as simple and playful as a cartoon; together the panels resonate to achieve complexity and mystery. Jones plays with form and color, she plays with chance, and she reveals possibilities.

“I work really intuitively,” she says. “I play around with invention, seeing what I can do. I’ve always been drawn to strong colors.” Jones works by what she calls “brainstorming—by doing tons of work.” Then she edits the results, discarding those panels that don’t sustain interest.

She finds patterns everywhere, in scientific symbols and drawings, in nature. “I draw irregularities,” she says, breaking a pattern apart to understand “how much I can push it before it loses itself.”

A blue and red pinwheel resembling an exploded Union Jack hangs beside what could be rows of dividing cells. Another panel might be the orange and black design on a kimono or a migrating flock of abstract birds. Ranks of yellow circles connected by zigzagging black lines could diagram a crazy football play, or maybe it’s an intricate dance step.

The power of All Together Now lies as much in the arrangement of the panels as it does in the conception of each one. Patterns and colors suggest connections, initiate progressions—associations both spontaneous and controlled. “This installation became a key to the language I’m using,” she says. “I think of it like the Rosetta Stone.” But Cassie Jones’s hieroglyphics need no translation to reveal their exuberant poetry.