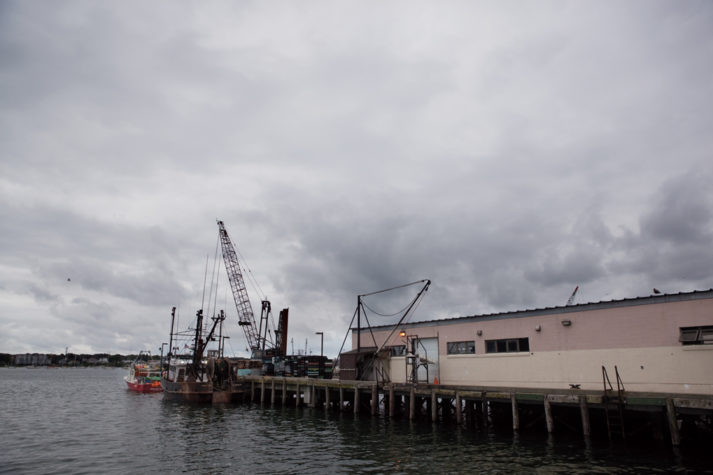 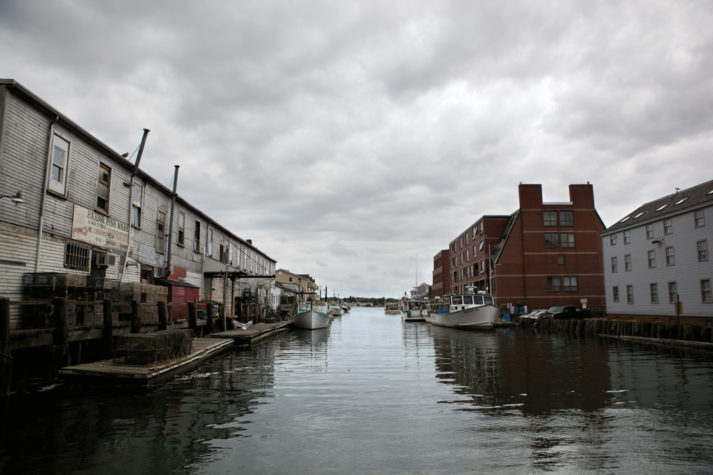 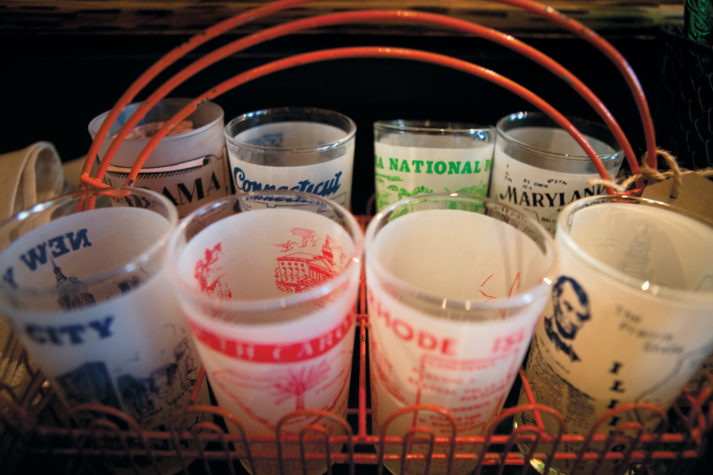 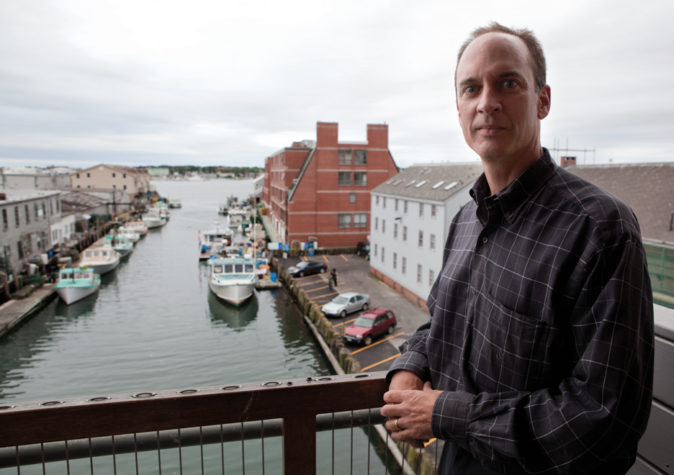 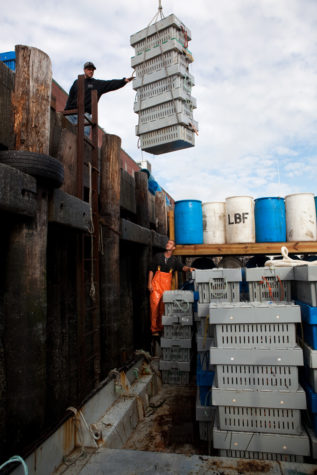 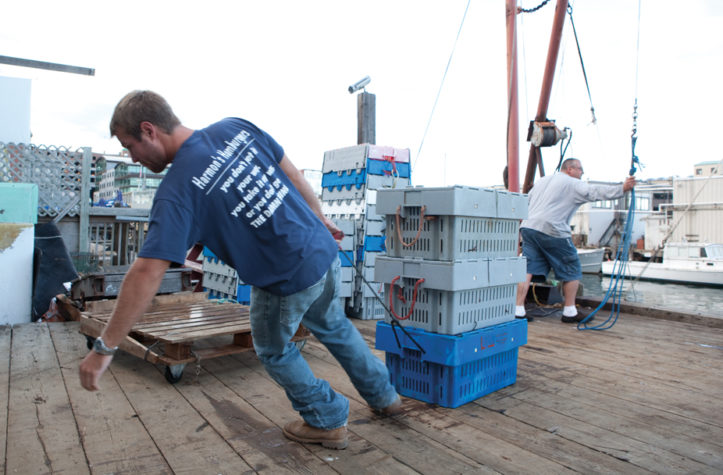 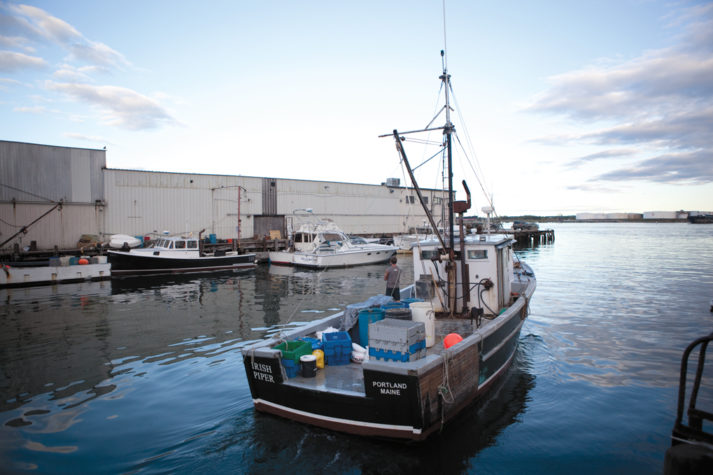 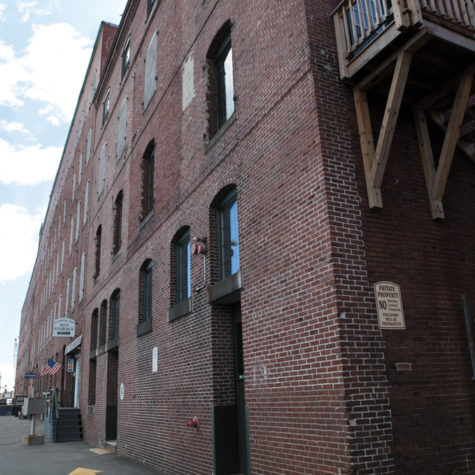 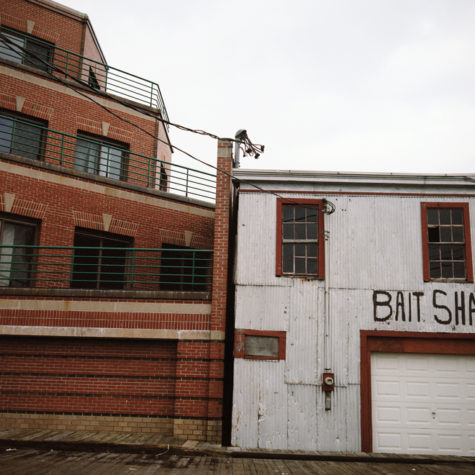 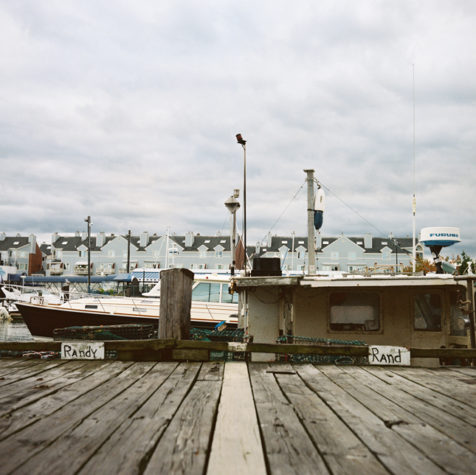 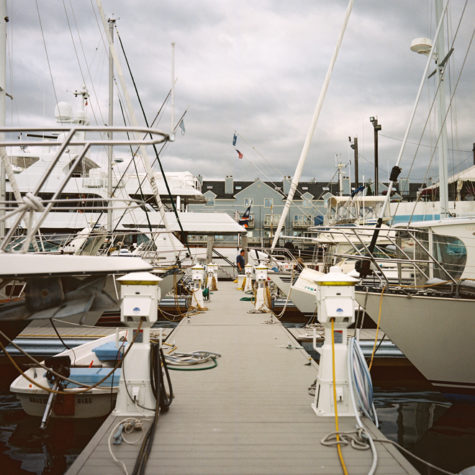 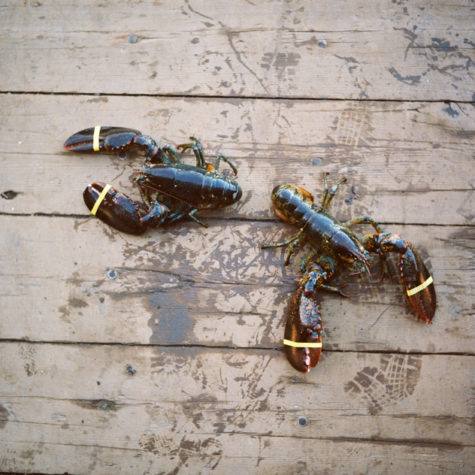 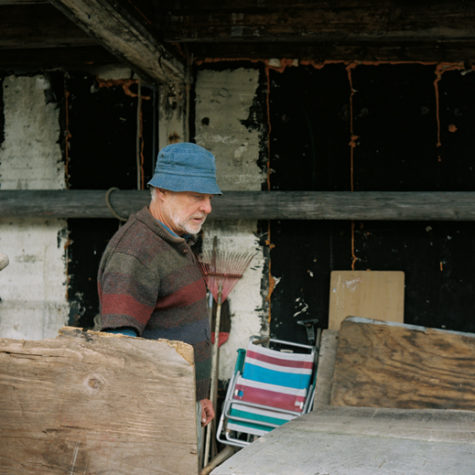 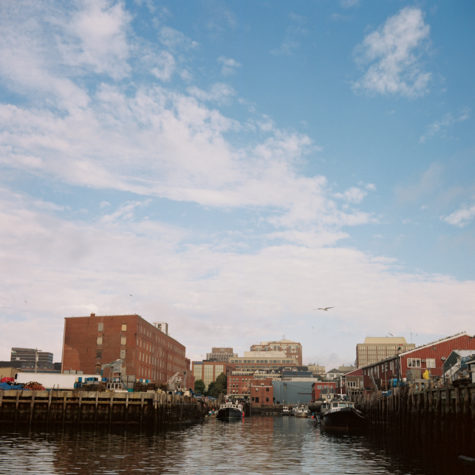 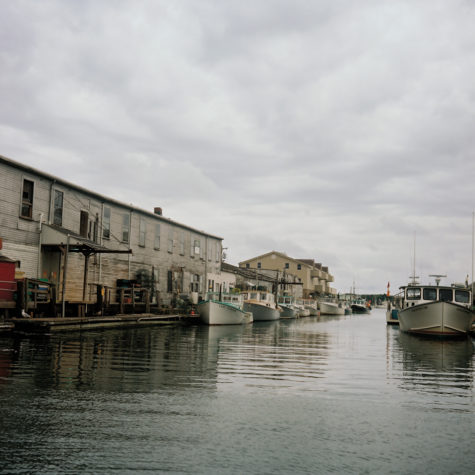 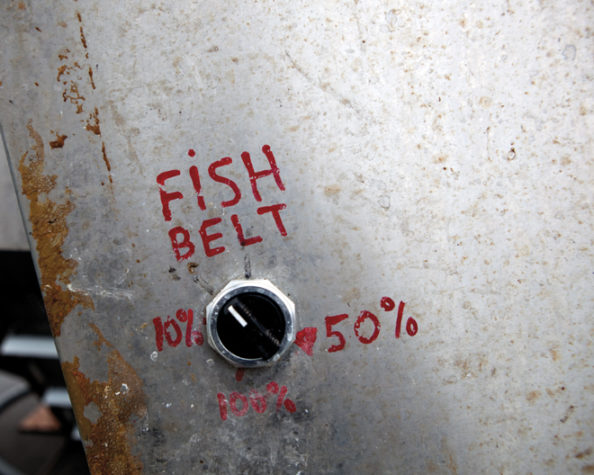 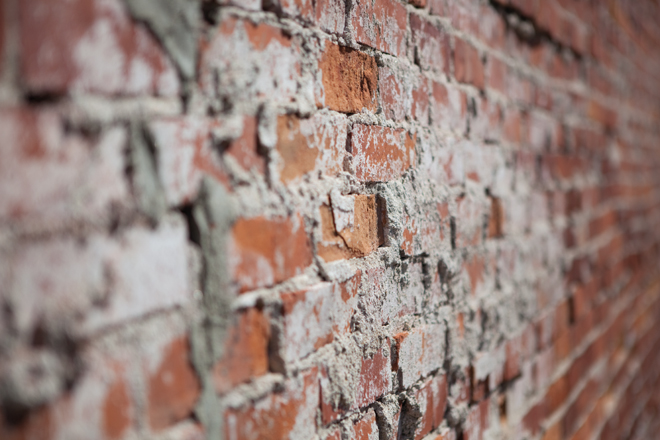 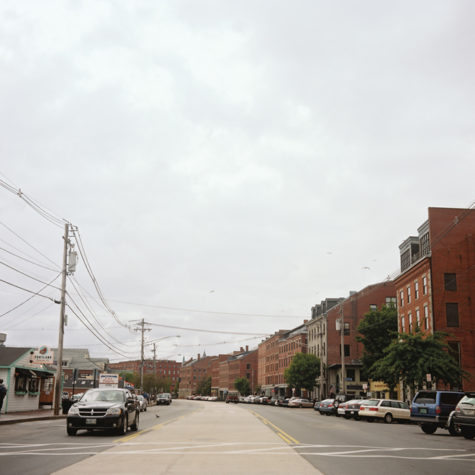 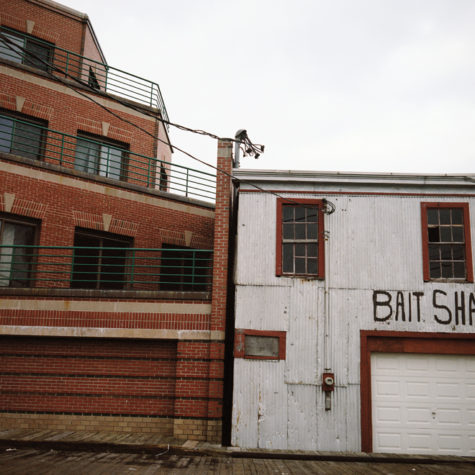 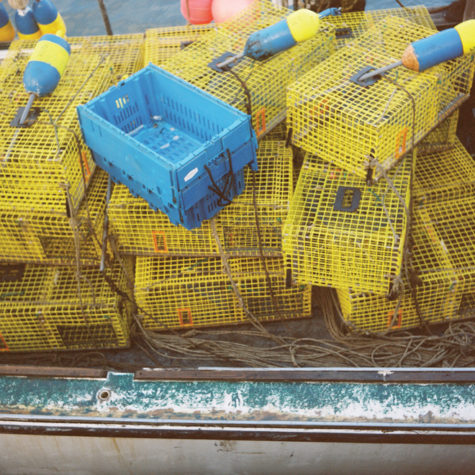 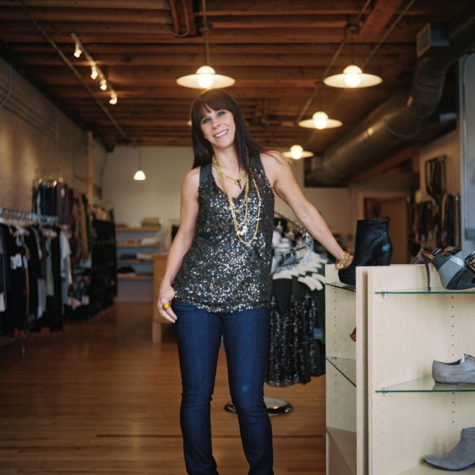 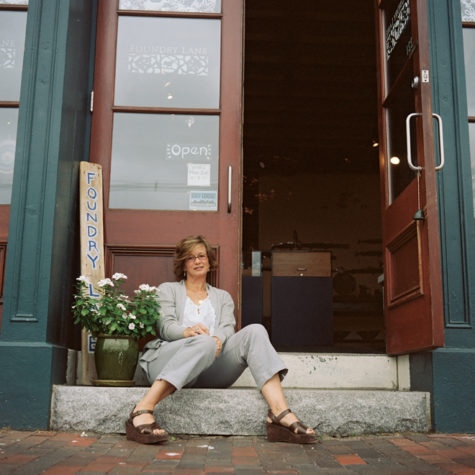 Jenepher Burton on the steps of Foundry Lane, her jewelry and craft store at 221 Commercial Street. 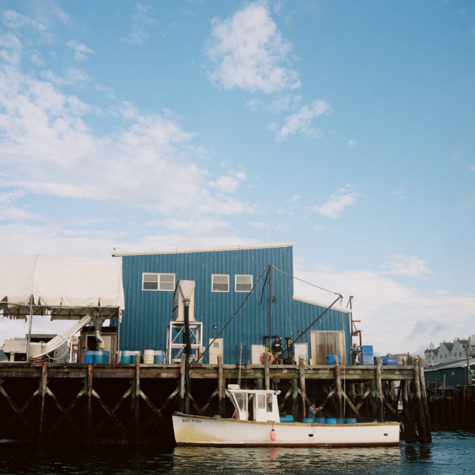 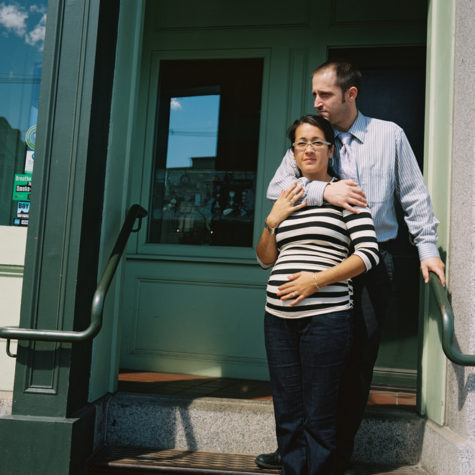 Charles and Martha Bryon in front of The Salt Exchange, their contemporary small plate restaurant at 245 Commercial Street. 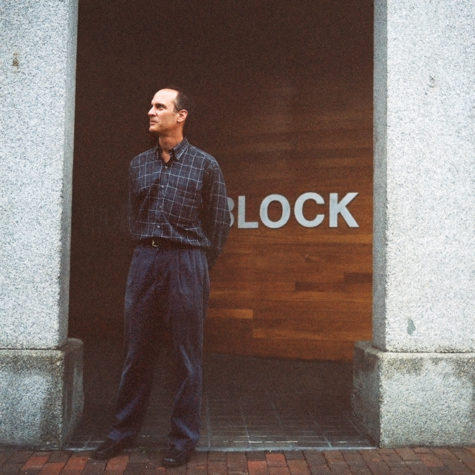 Commercial Street wakes up in the hours before dawn. Groggy sternmen clutch their coffee as they head to their boats, the first ferries sound their horns, and empty flatbed trucks back gingerly down wharves and reemerge fully loaded with neat rows of insulated totes. At once industrious and industrial, these early stirrings of activity set in motion the mechanics of a working waterfront that has been at the heart of Portland’s identity since its founding.

As the morning gathers momentum, another kind of working waterfront adds to the clamor of boat horns and offloading: A steady flow of traffic pours onto the street from east and west, retail stores of every description set out sandwich boards and displays, restaurants arrange patio furniture, and lawyers, food vendors, artisans, and tourists fill the sidewalks.

Writ large, this daily ritual is the abridged story of Commercial Street since its creation in the early 1850s.

The familiar boulevard and its dense forest of buildings are located on land that formerly did not exist—in fact, the entire area was once underwater. The original waterline began at Fore Street, but city leaders created a new seawall in the harbor, filled in the gap with thousands of tons of dirt and gravel, and expanded the working waterfront to its current configuration. Railroad tracks were installed along the street to serve a growing shipping industry, and chandleries, brokerages, and wholesale dealers sprung up on the landward side during the ensuing boom. The name Commercial Street reflected the purpose and spirit of what had become the furnace of the city’s economic engine. As the shipping industry declined in the twentieth century, however, trading businesses along the street faltered. By the 1970s, many of the once-prosperous storefronts along the street were shuttered.

After years of slow but steady growth, the street is once again filled with thriving businesses, and as development continues steadily the area has become a center of commerce in Portland.
Tim Soley, the owner of East Brown Cow Property Management Inc., bought his first building on Commercial Street in 1989, sensing the potential for a turnaround in the neighborhood’s fortunes. “In my mind I was trying to figure out where the energy was going and it seemed like it was going to be here,” he says.

But while the energy may have been gathering, there were still plenty of roadblocks for early investors who committed to the rehabilitation of historic but dilapidated properties. A short time after Soley’s first purchase, there was a stabbing in a neighboring bar that was known locally, and rather colorfully, as one of the “Three Doors of Death.”  The violence was a reminder that the neighborhood still had a long way to go.

“Here I was, twenty-five years old, a kid, and I was just thinking, ‘How am I going to make this work?’” Soley recalls.
Soley and other property owners have invested both financially and emotionally in a number of Commercial Street properties, renovating them from empty husks surrounded by pipe yards and mud pits to spaces that promote a feeling of light and warmth in the area. But there is still plenty of work to be done. “The development that started in the late seventies and eighties has become focused just recently,” he says.

Development is particularly robust in the central waterfront area, where this past summer a flurry of new tenants joined the long-established businesses and high-end retail shops that line Commercial Street. When specialty hardware outlet Decorum moved out in the spring of this year, the block filled quickly with newcomers McKenzie Tribe, Barbour by David Wood, Chantal, and Vervacious. In the adjoining building, Nicola’s Homes took up residence next to staples Asia West, Foundry Lane, Old Port Wine Merchants, and The Black Dog.

Originally on Middle Street in the Old Port, Chantal Young wasn’t initially sure that a move to Commercial Street would be right for her business, a women’s clothing boutique featuring chic fashions from big-name designers. However, because of good weather and a lot of sidewalk traffice, she is satisfied with her move after two months in her newly renovated space.

“I didn’t know if it was my vibe,” Young says. One of the things that ultimately sold her on the area was the variety of stores. “I feel like there’s a good mix, but at the same level.”
Young appreciates the sense of community and camaraderie among her neighbors and looks forward to planning collaborative events and sales to promote the area. She will be hosting the store’s fifth “birthday party,” as she calls it, during the First Friday Art Walk in November.

“There’s real life down here,” Young says. “There’s more people, there’s more traffic…we feel like we’re in a real city. The move was definitely a good thing. I think I add a little bit of something. We all do.”

At the other end of the block, Nicola Manganello’s Nicola’s Homes is also in its  second incarnation as a retail shop. She closed her Yarmouth store in 2000 to focus on her design, building, and renovation business and to spend time with her young daughter, Maeve. With a line of bedding picked up by Garnet Hill and a full-scale development in Cumberland Foreside to her name, Manganello decided to return to retail in June.
“I felt like if I located in Portland it would help me grow. The look and type of thing we were doing hadn’t really been done in the city before,” she says.

And the historic buildings along Commercial Street fit her sensibility. “I walked into the space and I knew it was the right fit for us,” she explains. “It’s a little urban and a little rustic. There’s a certain warmth to these spaces that you can’t reproduce in a sheetrocked space.”

Foundry Lane owner Jenepher Burton has been in her space down the street since 2003, when she closed Mainstreet Studio, which she operated in the highly seasonal market on Deer Isle, and moved to Portland. Her shop features handmade jewelry and crafts by a variety of artists, including Burton herself. Her time in Deer Isle, a small downeast island community, informed her philosophy of self and place, which made Portland’s waterfront a natural home for her business.

“One of the things I appreciate about this area is the diversity: the working waterfront, tugboats, gentrification, the seasonal aspect. I like being on the water and being part of the industrial landscape. I’ve always appreciated the contrast. I think it’s a very real place,” Burton says.

Pierce Atwood, a law firm that has called Portland its home for a century, embraces the contrast as well. Having outgrown its offices at One Monument Square, which the firm had occupied since 1975, Pierce Atwood

began looking for a new home. Unable to find a suitable space, the firm reluctantly considered moving out of Portland.  But city leaders were eager to keep the large employer in the downtown area and worked to develop a viable plan that would allow the company to remain. The result is Pierce Atwood’s much anticipated move to the waterfront building at 258 Commercial Street, which is currently occupied by Cumberland Self-Storage.

“From the perspective of the firm, there’s a lot of excitement,” says Maggie Callicrate, chief operating officer. Callicrate and managing partner Gloria Pinza look forward to seeing the looming five-story structure returned to life. Although it now stands impassive, its windows filled with cinder block, they believe the charm of the building will be revealed in the renovation.

“I think it’s going to be a really proud member of the waterfront. It’ll be standing there looking much happier,” says Pinza.

They also note that the move represents an opportunity for area businesses. With 175 employees, the firm will introduce a huge new customer base to the restaurants
and shops nearby.

Across the street, Charles Bryon, who
owns The Salt Exchange with his wife Martha, looks forward to the influx of potential new customers. Bryon believes Pierce Atwood’s relocation will be instrumental to promoting future development in the sparsely populated western end of Commercial Street.

“I’m glad to be here to watch it all happen. It’s going to be a big deal for Portland, at least this part of Portland,” he says.

Both Bryon and Meredith Alex of nearby Mad World, a fashion studio and boutique, hope that the relocated firm will foster new businesses on their stretch of the street, which is currently on the fringe of the
retail boom.

“There is still a pervasive sense of recession. But you see a lot of high-end businesses opening. It’s interesting that business owners are feeling like there is a market for this kind of stuff. And we do, too,” says Bryon.

Amid the surge in retail, restaurant, and office growth on the street, a lingering tension about the balance of marine and nonmarine outfits has simmered beneath the surface. But many of the new businesses cite the working waterfront as one of the main draws of the location. The Salt Exchange carries an enhanced seafood license that allows the restaurant to purchase fish directly from fishermen, and retail stores draw visits from tourists who are curious to see lobstermen in action. Even Pierce Atwood, whose move has drawn criticism from opponents of nonmarine businesses on the waterfront, embraces the area’s fishing heritage.

When a bait operation moved in next door to the building they planned to occupy, firm leaders worked with the owners and the fisherman who used the area to dry and stretch their nets to ensure that these very different operations could work alongside one another without conflicts arising.

“We had three or four or five meetings to figure out a solution that worked for everybody,” says Pinza. “The city, the Fish Exchange, the bait people, lobstermen, everyone’s been really positive.”

Charlie Poole, whose family has owned Union Wharf since the mid-nineteenth century, is something of a de facto historian of Commercial Street and a believer in a peaceable, mixed-use future on the waterfront. Union Wharf supports its fishing tenants with low rents and a well-maintained pier by supplementing rental income with the presence of nonfishing businesses like Sapporo Restaurant, Black Tie Bistro, and Winkelman Architecture.

“We quickly saw the value of having marine-compatible businesses,” Poole says. “That business may not have anything to do with marine business but can coexist without interfering.”

“I think the effort that we bring to the table is driven by trying to keep the waterfront viable.”

Continuing on its current trajectory, the blossoming district is likely to play a key role in supporting more than just the waterfront. As the local economy and the wider tourism climate improve, Commercial Street is well-positioned to support the rebound. Despite the availability of out-of-town package tours, cruise ship passengers are increasingly spending their time in port exploring the unique local shops along the street and its neighbors in the Old Port. As development moves steadily westward, highway traffic stopping for a bite at the iconic Becky’s Diner will have incentive to stay in the area.

After decades of decline, Commercial Street is on its way to reclaiming its place at the heart of the city whose motto is “I shall rise again.”