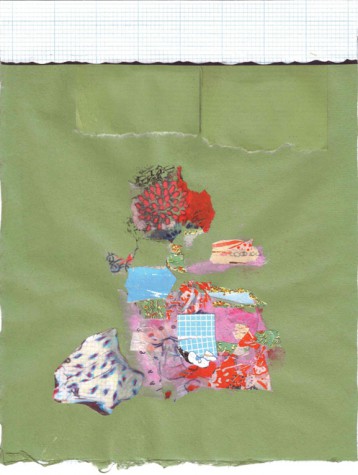 Andrea Sulzer’s work begins at the cellular level. She makes small marks, nuclei of activity, which multiply and migrate across her paper, tracking trails through white space, implying narrative. Sometimes they arrange themselves into recognizable shapes—a sea urchin, or a Life Savers candy. Sometimes they only suggest, flirting with the real world.

Sulzer earned her undergraduate degree in French, with a minor in physics, and she has master’s degrees in ecology and education. For a while she stopped drawing, then started again, went to Glasgow, and got a degree in fine arts. She has taught English as a second language and worked as a scientific illustrator and a lab instructor; now she teaches at the University of Maine in Augusta.

Recently, Sulzer has been making collages, constructions as dense and ethereal as her drawings. In her work, knowledge of the natural world combines with a passion for close observation and a wanderer’s curiosity—where will this take me? She imagines accretions that evolve into disturbing, playful, and inevitable organisms.

In Picnic, Sulzer mixes the textures of paper with drawing. “The green paper is a thin layer of oil-based printing ink. The fringe of black between the green and the graph paper is carbon paper; many of the little bits in the center image come from larger (often rejected) woodblock prints. There’s also colored-pencil on Denril and pen on paper,” she explains.

Sulzer invites viewers to dress her images in their own stories. Her sister wrote a poem prompted by this collage that contained the line: “Let’s pretend we’re having a picnic.” “It fit,” Sulzer says, so she called it Picnic. “You want the viewer to have the same sense of freedom, roaming within the image, that I had when I was making it.”

The patches of blue paper could be bodies of water, the little white shapes a pair of shoes, the sprigged white patch a flung-off dress on the green—a lawn in early evening?

The red and black ovals could be Fourth of July fireworks, decorations on a hot-air balloon, or the petals of an extravagant dahlia. Or they could be a burst of flames: the scraps of paper scatter into shards and the red splotches on the green ground turn to blood. The collage, Sulzer says, consists of “little explosions. You can’t tell if it feels celebratory or like a disaster. I’m interested in that place; it’s both threatening and funny.”

The image floats, as elusive and ambivalent as a dream or distant memory. A mix of events and impressions in an exquisite chrysalis—fragments and marks emerging and taking flight.