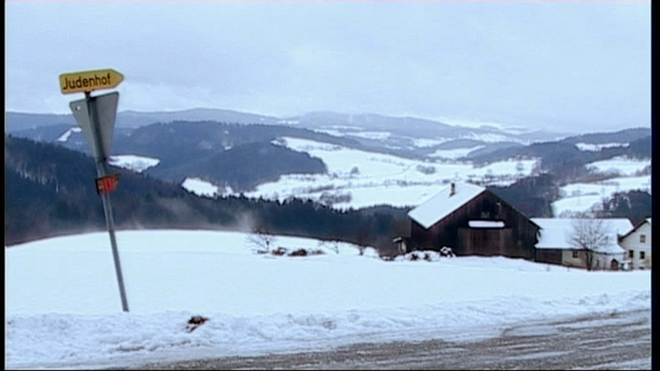 A grid of 303 small, numbered photographs with the flat, acid colors of old postcards hangs on the left wall of the gallery. Each is framed in unfinished oak. The panels look like a many-paned window with shifting views of streets: urban boulevards, suburban avenues, village lanes. Occasionally, a man, a woman, or an innocent child goes about his or her business, oblivious to the photographer.

In every photograph, you can make out a street sign: Judengasse, Judendorf, Judenweg. Street of the Jews. Jewish Village. Lane of the Jews. For three years, Susan Hiller, a distinguished American artist who lives in London and Berlin and who is having a solo exhibition at Tate Britain until May 15, searched Germany and recorded what she calls this “strange ambiguity”: places named for people who were killed, she says, “within living memory.” She found and photographed 303 signs that marked where Jews had lived before World War II.

On the wall opposite the pictures, a map of Germany indicates, by number, where each was taken. Beside the map, an alphabetical list cross-references towns and photographs. Like the Nazi plan for the destruction of the Jews, this installation is orderly and carefully documented.

But unruly thoughts and questions intrude. Some of these places are very beautiful. Who lived there? How did they live? Who lives there now? Some of the signs mark streets that have been recently named. Why? Under the subdued and organized surface, the photographs radiate absence. They seem straightforward and documentary, but they are masterfully composed.  Each one focuses on empty space.

A video runs in the next room. Hiller catches the juxtaposition of a Judengasse next to a Polizei. A man—he looks old enough to have fought in the war—pauses under a street sign. In Dresden, raucous klezmer music—Jewish ragtime—blasts from a CD player. An off-screen street musician plays Bach on a scratchy violin. For a while, Bach lived in Leipzig, in the southeast corner of the map.

Images and sounds weighted with suggestion build into a rich and haunting tension. Although we know the story and its ending, the installation disturbs time. In its rooms, we watch and listen, apprehensive. Something is still happening. With passionate precision, Hiller has made art out of what is not there.

A coda to The J. Street Project hangs in an adjacent gallery. Displaced Persons is a selection of photographs by Clemens Kalischer, who himself fled Hitler. For one of his first assignments as a young photojournalist in 1947–1948, he took pictures of refugees waiting to be processed at Ellis Island: an old woman embracing a man, two sly and beautiful girls, a solitary boy, a proud woman in a ratty fur coat with a numbered tag dangling from its button. The images are saturated with emotion: pride, fear, joy, sorrow, relief. Photographer and subjects—they are beginning new lives.