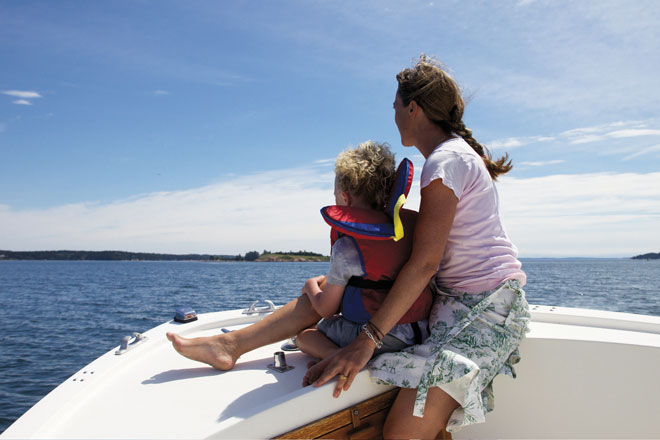 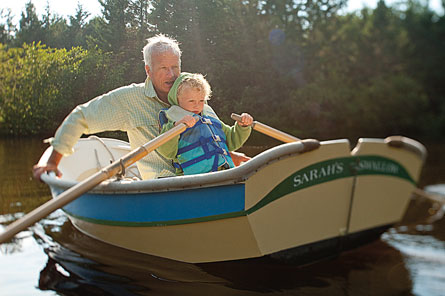 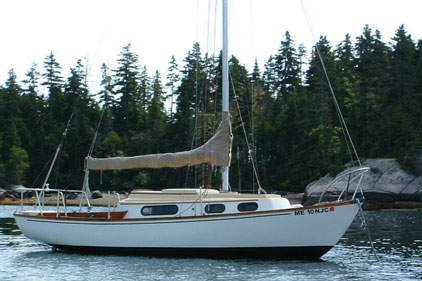 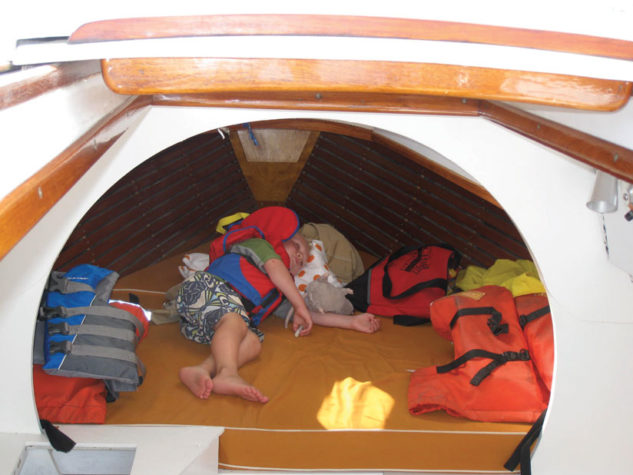 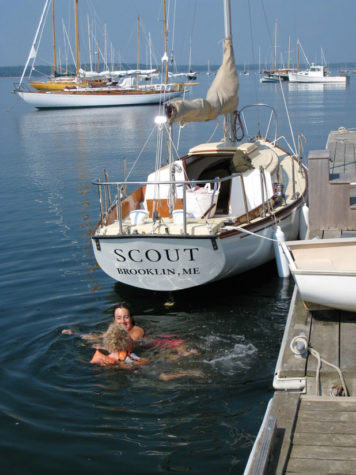 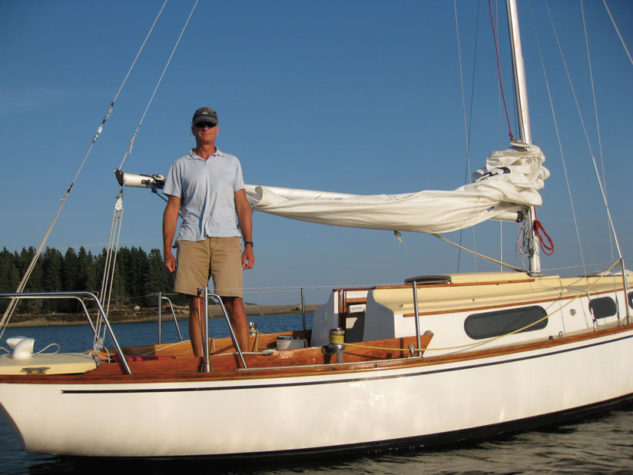 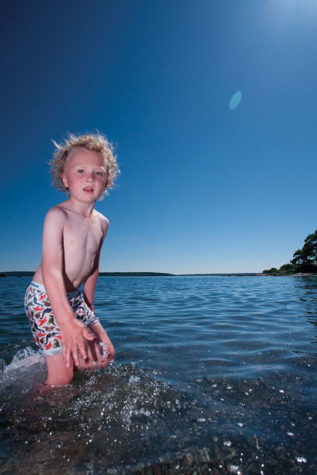 Or, Why He Learned to Love Sailing

During the splashy depths of mud season, I often recalled my last sail. Eggemoggin Reach, the middle of October. Breeze out of the southwest, 10 to 12 knots. Passing under the Deer Isle Bridge. Coming about at the entrance to Bucks Harbor. Sailing back along the Reach and then up Benjamin River before putting Scout on a mooring close by the Sedgwick town landing.

She was being hauled the next morning, so I spent a couple hours unbending sails, taking off the boom, and pulling the engine—a four-stroke outboard hunkered down in a well. I bagged sails and extracted cushions, charts, and tote bags full of gear from the cabin, then cautiously eased the engine down into the dinghy. Scout is a small sailboat—a Cape Dory 25. It took only three trips to row everything ashore.

Fine October weather along the Reach isn’t that uncommon, so why do such days always feel so rare? Fleeting is a word people often use. The adjective autumnal, after all, implies just about over.

The last sail of the season and preparing the boat for winter carries an almost mythical quality. Maybe it’s the slant of October sunlight that loads that particular day with a strange, prepackaged nostalgia. It’s hard not to start processing those hours as memory while I’m still in them. Perhaps that’s the inevitable consequence of ritual.

I did not sail until I returned to Maine. I spent 15 years in a coastal town in Southern California, where hundreds of sailboats were stashed in the local marina. But I didn’t go out— not once. Maybe it was the industrial scale of the marina or the fact that it was a lucrative commercial operation and not a natural harbor or a cove. Maybe it was the thousand boats that never seemed to go anywhere, or the tinny chorus of all those halyards rattling against aluminum masts. Perhaps it was the blank-blue Pacific or the barren Channel Islands, which were the only islands you could reach unless you were aiming for Hawaii or Japan. It seemed like a sad place.

When I left California and my unproduced screenplays behind, I drove across the country in an aging Volvo, rented an old farmhouse in Brooklin, and kept working on a novel I had started about the Irish Famine. Writing it in Southern California had been making me dizzy.

A canoe came with the farmhouse. After putting in several hours of writing, most days I would paddle around Center Harbor, visiting the loveliest fleet of sailboats I had ever seen, many of them built and launched right there at the Brooklin Boat Yard.

Then, winter came. It was my first Maine winter in 20 years, and I was alone with an unfinished novel, a isolation just then. I didn’t talk to my closest neighbors until spring, but two minutes after we met they invited me to go sailing.

Vital Spark was a wooden ketch on a mooring in Center Harbor. It was late May—cold, blue, and plenty of wind. Some novices can climb aboard a sailboat for the first time, take the helm when it’s offered, fit it all together in their minds, and sail instinctively. I’ve seen it happen, but it didn’t happen to me. I was a clumsy and embarrassingly unskilled hand. The muscular geometry of wind, fireplace (not a woodstove), and the memories of my abandoned life in California. My new life was filled with uncertainty that was counterbalanced by the bleak certainties: loneliness, heating bills, and expensive snow tires for the Volvo. I didn’t know anyone within 300 miles. Perhaps I needed the canvas, and keel made no sense. I could not remember the names of all those damn ropes or comprehend why we were sailing faster with the wind in our faces than at our backs.

I’ve never been a natural at anything. I’m a slow learner, and it often feels as though all I’m learning is different ways to make the same mistake. But I can hang in there, and at a certain point—usually beyond the point of everyone else’s exasperation—I suddenly get it. And then I’m all right. Smooth sailing, finally.

I liked sailing immediately even though I was no good at it. In fact, I seemed to like it a lot more than many people who were really good at it. That first season, I made a rule for myself: if anyone asked me to go sailing, I would drop everything, including the novel, and go. Sailors are always looking for hands, even hands who are not much use for anything besides picking up a mooring stick or making the sandwiches. I was able to spend a lot of time on boats, and gradually over two or three seasons I began to figure things out. Although still a novice, I’m now an adequate inshore sailor. I tell myself I’m getting better every year.

I met B. when she sailed into Center Harbor. She and her mother had chartered a boat out of Northeast Harbor and were headed for Rockland, with B. as skipper. A mutual friend had given her my phone number, and after picking up a guest mooring she called and invited me to have drinks aboard.

Like anyone cruising in a small boat, she and her mother were really after hot showers and a lift to the nearest ice machine, but I hopped into the canoe and paddled out there. Two years later, B. and I were married out on Flye Point.

Before our marriage, we bought a house, but before the house—and long before we had a boat of our own—we dropped a mooring in Center Harbor. It was our first joint venture, our earliest claiming of co-ownership as a couple.

Sailing in Maine—unlike, say, sailing in Australia—has retained an elitist aura: faded madras shorts, topsiders, and highballs at ye olde yacht club. There are certainly plenty of elitists sailing here in the summertime, and many of them sail awfully well, which can be galling. But, as you are reading this, plenty of ordinary, neighborly, year-round Mainers are working hard to get their sailboats in shape to get wet. Sailing, even in Maine, is expensive, but it doesn’t have to that expensive. We bought our 30-year- old sailboat from neighbors for considerably less than the price of a good used Kia.

A Cape Dory 25 is a humble sailboat with classic lines and a pleasing sheer. Scout sleeps two adults and a child in reasonable discomfort. It’s true that owning a sailboat means maintaining a sailboat, or paying someone to do it for you, and boats are demanding creatures that constantly need mending, updating, or replacing. If you buy a boat, your friends and family will always know what to get you for Christmas: a gift certificate for Hamilton Marine. You’ll also have to acquire a mooring or a slip, which can be costly. And just getting a boat launched and hauled out every year is not cheap. But once she’s in the water, perfect summer days are yours for just about nothing. Some owners will drop two hundred thousand a year on dock fees, engine overhauls, meticulous brightwork, monogrammed sheets (the sort you sleep in, not the ones used to trim sails), and baubles for the deck fluff. We get by on 1 percent of that.

We sail because we live on the coast of Maine and sailing makes us pay attention. Wind, salt water, the hum of a sail, various kinds of sunlight, bald eagles diving on herring runs, guillemots, green porpoises, whales hissing and sounding—I wouldn’t want to live here and miss any of that.

Now that semi-summer has arrived, and the drear season of stubborn mud and irresolute weather is behind us, I’m commuting between the boatyard and the rest of my life with hope in my heart. The aged Volvo smells of varnish and thinner, and both the trunk and backseat are a jumble of canvas bags filled with tools, sanding blocks, spark plugs, and wads of tack cloth. And of course I know that, come next October, the last sail of the year will once more summon my archival instincts. Something precious will be slipping away, and it’s something that really ought to be preserved. Only it can’t be. Alistair MacLeod, the Nova Scotia writer, wrote a short story called the “The Closing Down of Summer,” and that’s what that last day of the sailing season will always feel like. Right now, summer’s just in sight, but in another second it will be November. Everyone in the grocery store, even infants, will be wearing orange, and I shall be looking forward to another spring.