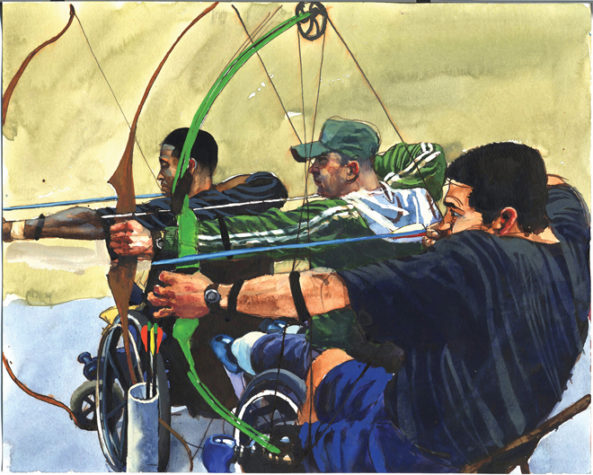 Steve Mumford first went to Iraq in 2003. “I flew to Kuwait City and found a ride to Baghdad with a French journalist. I remember going with my mother to antiwar rallies at the Boston Common. There was something that haunted me about Vietnam, like a wire that was too hot. I was working on a series of paintings about the war— I had war on the brain. It occurred to me that I should go.” Since then he has made six trips, sometimes embedded with the army, sometimes on his own. This past winter he went to Afghanistan.

He records the complexity of the region and its pervasive anachronisms. He sketches women washing clothes in a river, as they have done for millennia. But now they are guarded by robed men carrying automatic rifles.

Mumford graduated from the School of the Museum of Fine Arts in Boston in 1987 and earned a master’s degree from the School of Visual Arts in New York. He paints stories; in his drawings he collects evidence for more formal, composed narrative paintings. Mumford’s dramatic compositions echo the intention of nineteenth-century masters, such as Delacroix and Manet, who transformed the academic discipline of history painting into indelible images of the bloody upheavals of their own time. For our time, Mumford’s drawings are immediate and fluent, charged with war’s adrenaline, its dangerous allure, and its awful toll.

Mumford made Archers in an army hospital. The dingy yellow background flattens perspective; the heads of the men and their weapons seem to float on the surface of the paper. The curves of their bows link in formal, elegant rhythms.

This could be an ancient Assyrian frieze of warriors. The image seems timeless—almost. Two of the soldiers are in wheelchairs; they are double amputees. The third man has an artificial limb. Their wounds are appalling, but their forearms are sinewy and strong. The man in the foreground is shooting with a high-tech hunting bow.

There is nothing easy about this drawing. It confronts the workings of war and condenses its contradictions: its monstrous brutalities, its instances of grace. Despite their ruined bodies, these soldiers are working to kill. Archers moves beyond politics to witness an ancient continuum of fellowship and courage, pity and terror.