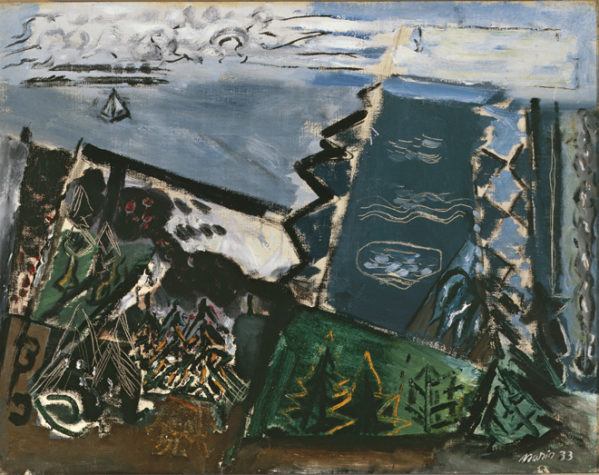 John Marin’s long career spanned— and came to define—half a century of artistic upheavals in America, from modernism to abstract expressionism. Born in New Jersey in 1870, Marin was raised by two maiden aunts. He briefly trained as an architect, then he switched to painting. After studying at the Pennsylvania Academy of Fine Arts, he spent six years in Europe.

Cubism’s fractured volumes freed up Marin’s explosive energy and instinct for nervous line. Although he began experimenting with abstraction soon after he returned to America, he never let go of a connection to the seen world.

Marin spent winters in New Jersey, across the Hudson River from Manhattan, and summers in downeast Maine in a little house in Addison that he described as sitting “so close to the water I almost feel at times that I am on a boat.” John Marin: Modernism at Midcentury, an important exhibition at the Portland Museum of Art, explores how the artist influenced, and was influenced by, the emerging New York School. It traces Marin’s increasing focus during the last twenty years of his life on what he called “movements of paint, not movements of boat, sea, or sky.”

Marin painted Composition, Cape Split, Maine, No. 3 in 1933, his first summer in Addison. He had made his reputation as a watercolorist; now he began to work with oils again, figuring out how to convey in a more viscous medium the lightness he achieved with watercolors.

This is a Cubist landscape, a grid of earth, water, and air with no transition between elements. It fits together like a cosmic jigsaw puzzle. The land is painted dark and thick with dense, overlapping rhythms. Ocean, cloud, and sky swirl in thinner, translucent layers of gray with patches of bare canvas showing through.

Fir trees are orange zigzags, a sailboat is two triangles, rocks are black squiggles, all abstract and quick as a child’s drawing.

Colors read as contrast: darks and lights—tones, not hues. Lines skitter and intersect over the surface; painted masses collide. Everything is shifting. Marin has tracked the motion of wind, light, and time with his brush, and marked their trails with paint.