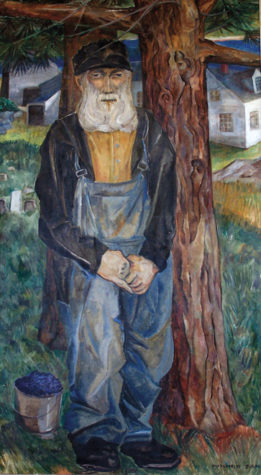 Marguerite Zorach was a California girl with an appetite for adventure and a passion for drawing. In 1908, as she was about to enter Stanford University, her aunt invited her to go to Paris instead. There, Marguerite studied art and met Picasso and Matisse. She became intrigued with the avant-garde and with another American art student, William Zorach. William and Marguerite married and embarked on intertwined artistic careers. Both exhibited in the revolutionary Armory Show of 1913. America, Marguerite wrote, was ripe for modernism because “she has but little past of her own to hamper her.”

In 1922, the Zorachs visited the sculptor Gaston Lachaise and his wife on Georgetown Island, just off the Maine coast, an area called “Seguinland.” The Zorachs soon bought a house nearby and became part of a community of artists that included Lachaise, the painter Marsden Hartley, and the photographers F. Holland Day, Gertrude Kasebier, and Paul Strand. The spectacular scenery figured in all their work, but Marguerite, who spent much of her time caring for their two children, also made portraits of her neighbors in Seguinland, marking her connection to the people as well as to the place.

In this full-length portrait, Guy Lowe stands in his big boots, as substantial as one of the tall pines beside him. In the background, Zorach has painted a white farmhouse overlooking a cove—rooting the man in his place. According to his obituary in the local paper, Guy Lowe was “small of stature and mind.” He did odd jobs. The community looked out for him.

A bucket heaped with blueberries sits on the ground behind him, and a felled log lies beside a couple of tree stumps—signs of his occupation, like a saint’s attributes in the panel of an altarpiece. Zorach took from Europe’s artistic past what she needed to invent a generous, unhampered, and American vision of what is sacred.

This painting is part of an exhibition at the Georgetown Historical Society, Georgetown Goes Modern: The Modern Art Movement Meets an Island Community, a companion to the Portland Museum of Art’s show Maine Moderns: Art in Seguinland. The objects in the Georgetown exhibition, curated by Kristen Start, come from local collections. The show includes works lent by Dahlov Ipcar, a distinguished artist and children’s book illustrator, who is the daughter of Marguerite and William Zorach.