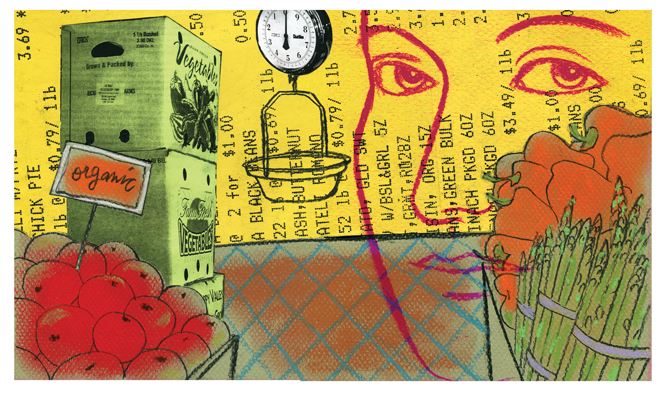 Local naturopath Richard Maurer answers the question, once and for all.

What should I eat? I get this question at least once a day—which is surprising, considering that most of the people asking are health-conscious adults who have been feeding themselves for at least a couple of decades. I applaud the question because eating well is one of the single most important (and enjoyable) actions you can take to protect your health. The old saying is true: you are what you eat. Genetic predilections come into play, of course, but general wisdom on this topic is borne out in study after study: a healthy diet full of high-quality nutrients builds a healthier person. The problem, however, is that this simple idea isn’t that simple in practice. In fact, it’s diabolically complex, and nutritionists keep whipsawing us back and forth with what constitutes a healthy diet. A recent perusal of the Hannaford checkout aisle in Portland revealed no fewer than 12 headlines promoting one food or another as the secret to, among other things, longevity, weight loss, sexual performance, happiness, cancer prevention, and—the all-time winner—flat abs.

All the conflicting nutrition advice and improbable claims can be confusing—and they aren’t working. According to the Centers for Disease Control and Prevention (CDC), 66 percent of American adults were considered overweight or obese in 2009, and the number of obese adults is expanding each year. Our national food pyramid was revamped this summer to address these belt-popping statistics. The now plate-shaped diagram endorsed by the U.S. Department of Agriculture emphasizes fruits and vegetables, recommends a moderate amount of lean protein and whole grains, and encourages people to eat fewer calories overall. In Maine, an agricultural state where people have ready access to local, farm-fresh foods, obesity rates are marching in step with the nation; in fact, they have risen 100 percent in the past two decades. Today, two-thirds of our residents are considered overweight or obese. Plus, similar CDC reports show that, as recently as six years ago, we had the fourth-highest percentage of people in the nation dying from chronic diseases: cardiovascular disease, cancer, chronic lung disease, and diabetes. The irony? Of these four major killers, three are largely preventable with good nutrition and lifestyle habits.

Luckily, Maine also has many brilliant physicians and healers. I decided to visit Richard Maurer, doctor of naturopathic medicine at the Coastal Naturopathic Center in Falmouth, to help me solve the health-food riddle once and for all. I chose him because he was one of the first five licensed naturopathic doctors to practice in our state (there are now 25). Within two years of moving to Brunswick with his family, he and his colleagues pioneered a state licensing procedure, which became state law in 1996. He is the most recent past president of the Maine Association of Naturopathic Doctors.

Maurer started his medical practice in 1994 with his wife, Alexandra, who is a licensed practitioner of traditional Chinese medicine and acupuncture. Since that time, he has helped more than 7,000 people in Maine feel better—naturally. The goal of Maurer’s practice, as set forth in its mission statement, is to help restore a patient’s health through an intelligent and informed use of natural medicine and therapies, with an emphasis on proper diagnosis. He reinforces disease prevention through appropriate, individualized nutrition and a lifestyle that nourishes wellness in both body and mind. But originally, he came to his profession by trying to answer the very same questions I have.

Maurer describes it this way: “I was getting my music degree in college and reading nutritional textbooks in my spare time, asking myself ‘What is a healthy diet?’ Macrobiotic diets were the rage then and I became a strict vegetarian, which actually ended up making me sick. It was touted as the healthiest diet in the world at the time, but when it came to this study group of one [Maurer points to himself], it was the complete opposite.” He grins at the memory. “I decided to go to the National College of Natural Medicine and begin a study of the human being that led me to study individual human beings. The question then shifted to ‘What is this person’s healthiest diet?’” Maurer chuckles. “Turns out, I need to eat meat.”

As we talk, I begin to understand: instead of ricocheting back and forth between health fads, stocking up on pomegranate juice and fish-oil capsules, the better way—and probably far cheaper way—is to spend some time with a licensed naturopathic doctor who bases his or her recommendations on sound medical tests and hard data. The goal is to determine what you—with your individual genetic profile, lifestyle habits, and dietary and health idiosyncrasies—should eat to heal, feel better, and thrive. This doesn’t mean there aren’t general guidelines we can all follow. Maurer is a big proponent of bringing healthy, traditional fats back into our diets. He currently prescribes the FatBack diet to many of his patients and is working on a book on the topic. Briefly described, the diet incorporates healthy fats (including saturated fats) into lower carbohydrate meals. The inspiration is Maurer’s professional experience. Over the years, he has found that most people feel best when they eat like their ancestors: fresh foods that are naturally or locally grown and caught, that are minimally processed and in season, and that are rounded out by a small portion of a fermented condiment (like sauerkraut) and cooked in or served alongside a dollop of healthy fat.

“But this is also individual,” he explains, “because your great-grandparents lived in a different place than mine.” This is true. If I were to eat like my Norwegian ancestors, it would mean a lot of potatoes, fiskekaker (fish patties), grovbrød (whole-grain bread), cheese, and rakfisk (fermented trout)—which, come to think of it, resembles the diet also recommended by the USDA’s new food plate.

So, thanks to Maurer, here’s my best answer to the question of what to eat: it’s personal. What works for me may not work for you, but the sooner we find out what foods work for us, the better. Unfortunately, most of us wait until we’re already sick.

“I usually see people after they’ve been to a traditional MD for a while for a diagnosed condition but it’s not resolving,” says Maurer. “Medication isn’t working, or the patient is sick of taking the drugs and they want to try something else. My job is to look long and hard at what is getting in the way of the body’s natural tendency to be well and remove it. I think of myself as a detective in someone’s health process, always sniffing out which system is responsible for the disease.”

When I ask Maurer what conditions he regularly treats, they read like the headlines at Hannaford: obesity, diabetes, asthma, allergies, menopause symptoms, and learning or developmental issues in children. In most cases, Maurer finds that within three to four visits his patients have enough of a handle on their condition to manage it on their own. And when it comes to prevention, one or two visits are sufficient. But very few of Maurer’s patients are in his office as a preventative measure. Maurer shrugs. “Symptoms are great motivators: the sicker you feel, the more incentive you have to do things that make you feel better. So I say to my patients, ‘Great! Bring it on. We’ll figure it out together.’”