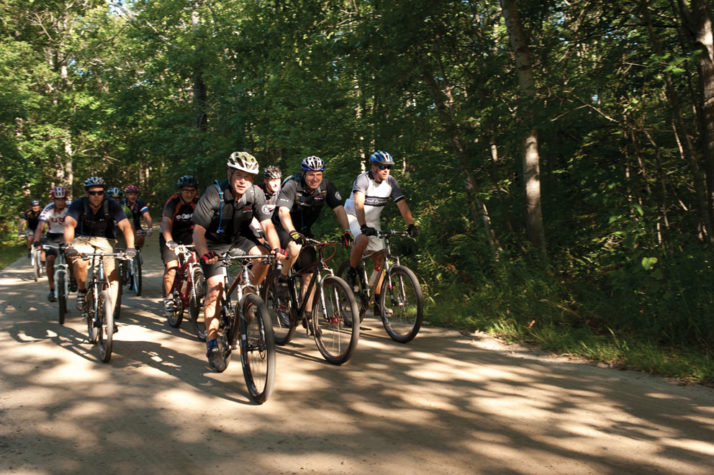 President Bush, flanked by Chris Smith to the right (in black), says, "I congratulate my friends and biking companions Brandon and Chris for building outstanding trails. I look forward to riding the trails for many years, and I hope many others will as well." 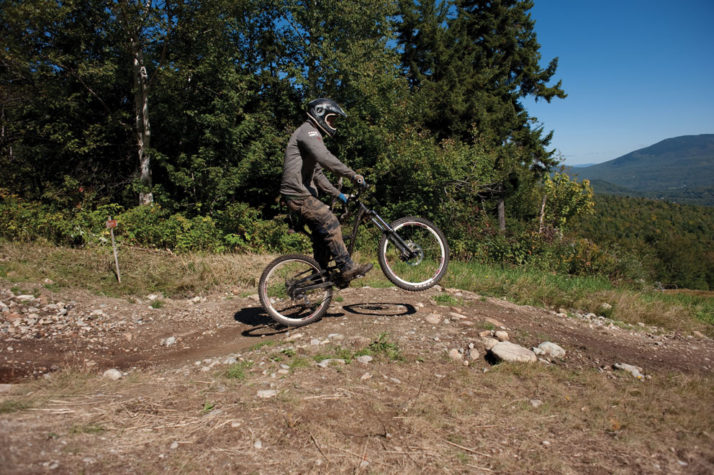 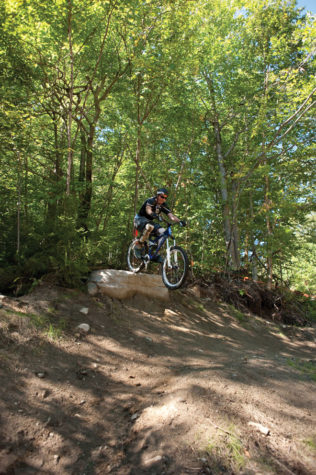 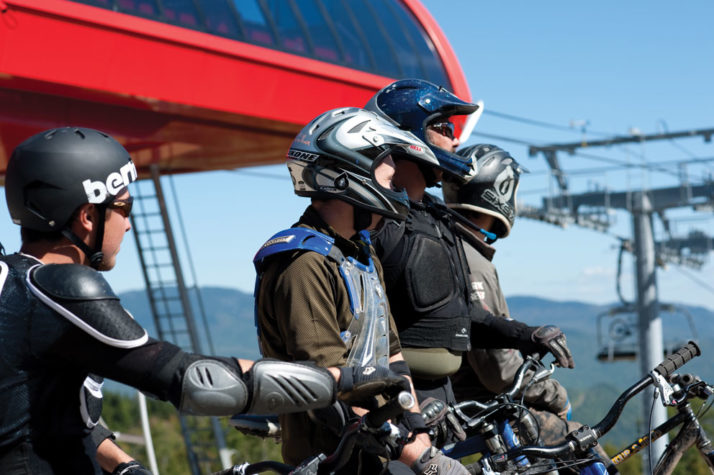 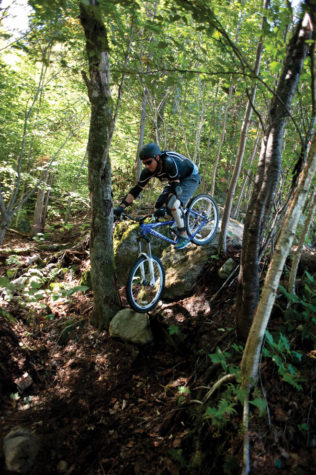 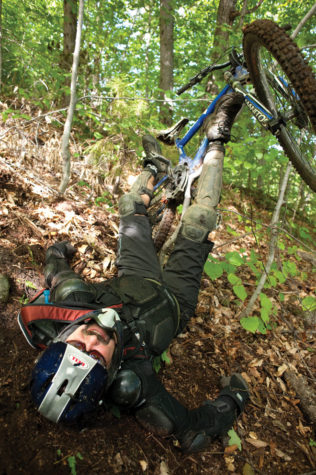 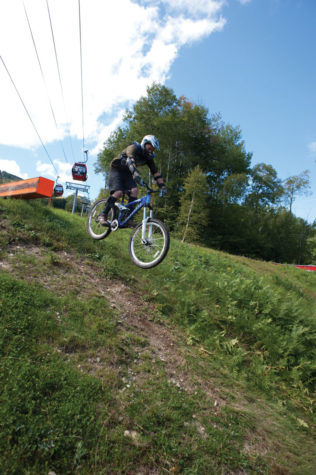 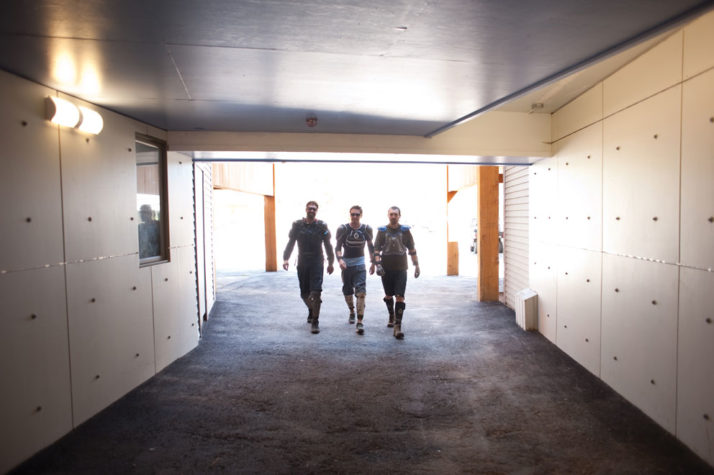 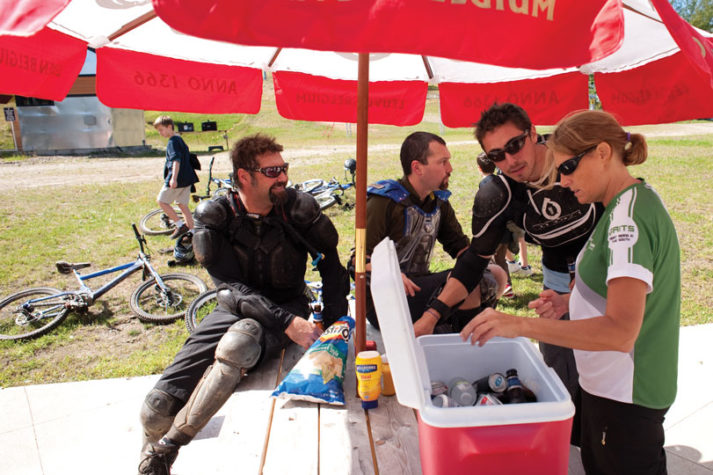 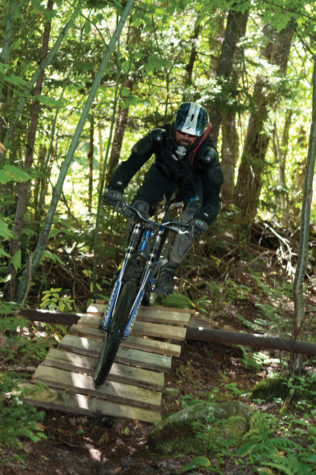 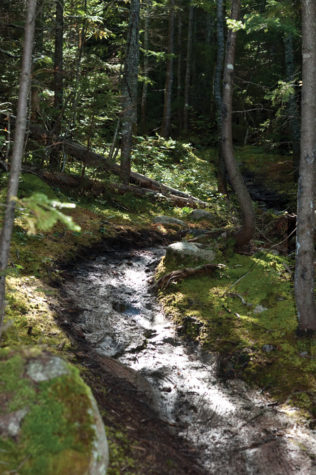 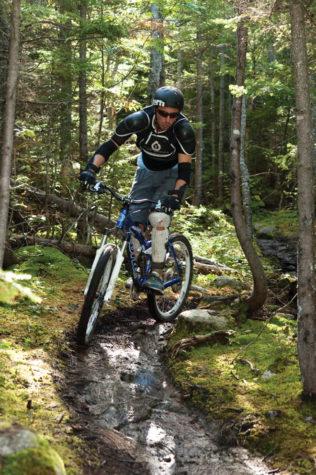 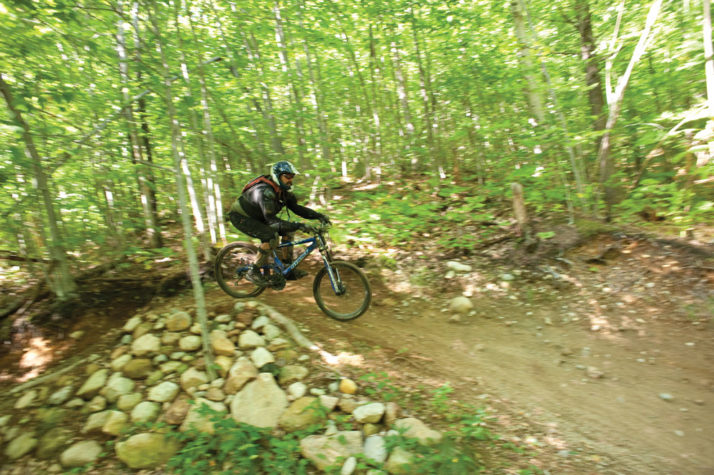 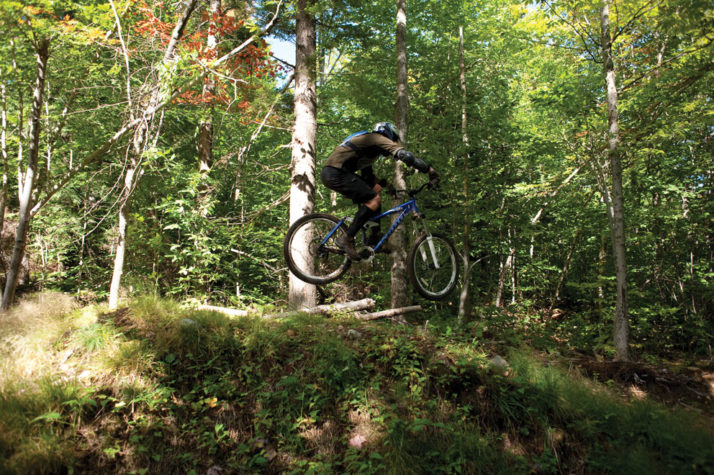 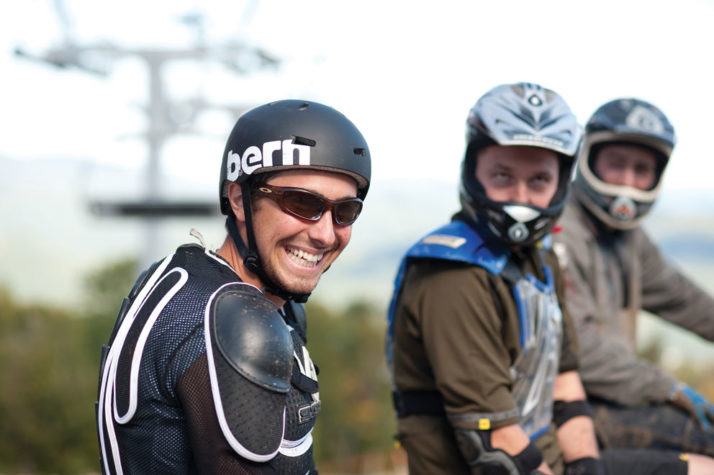 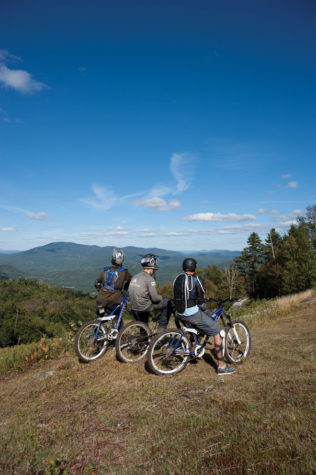 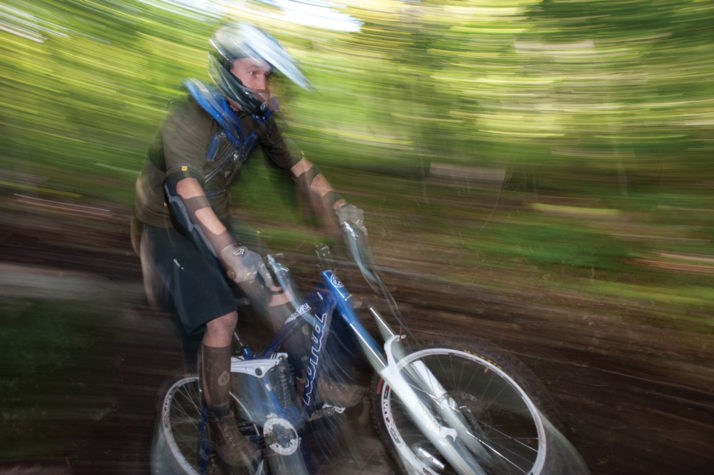 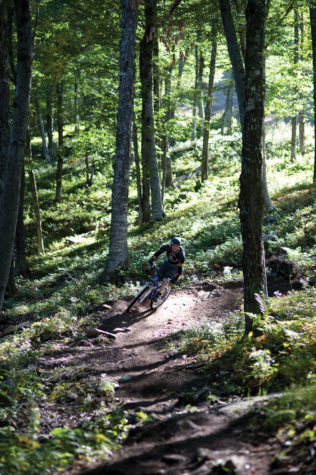 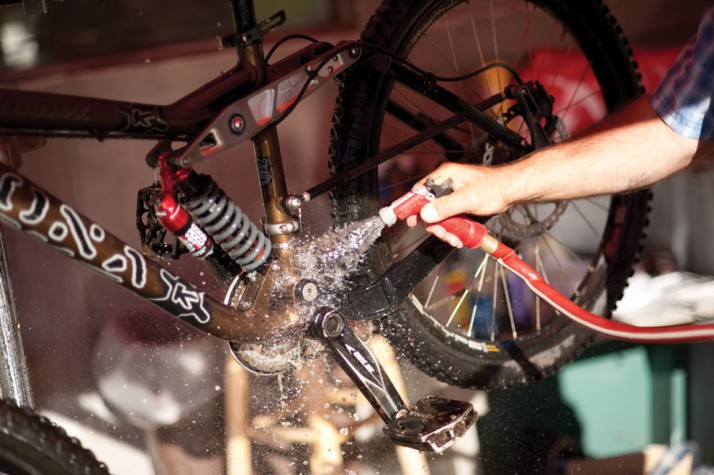 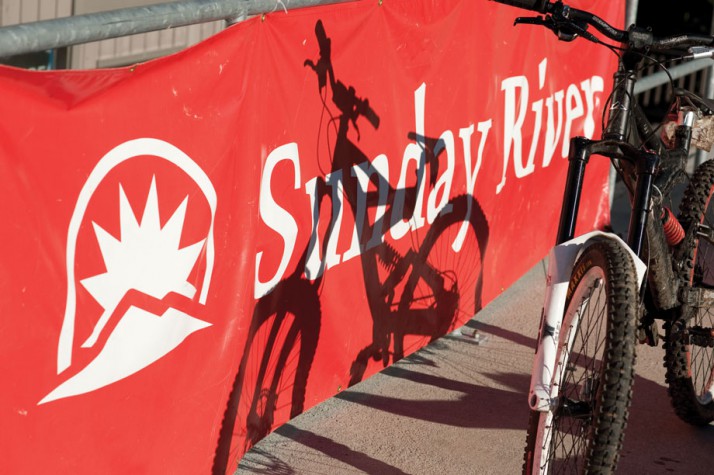 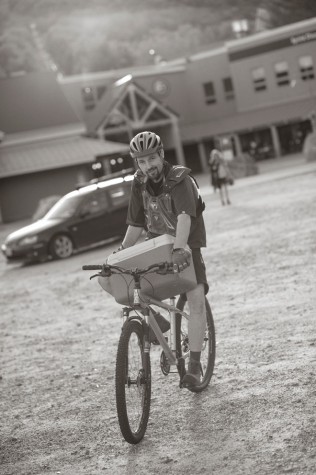 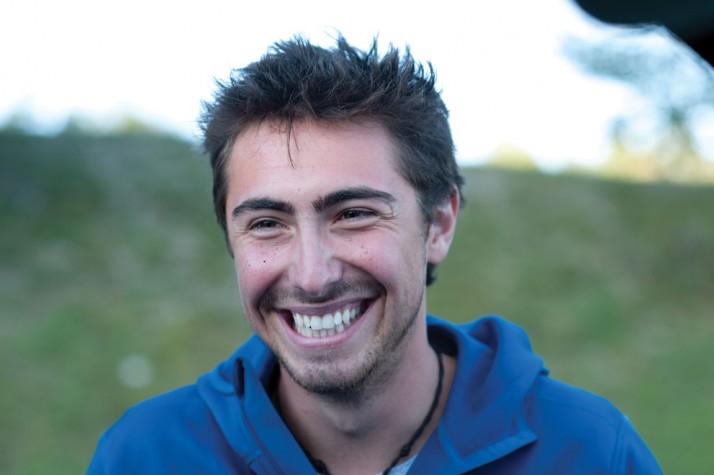 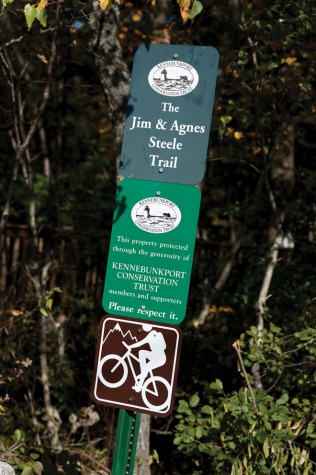 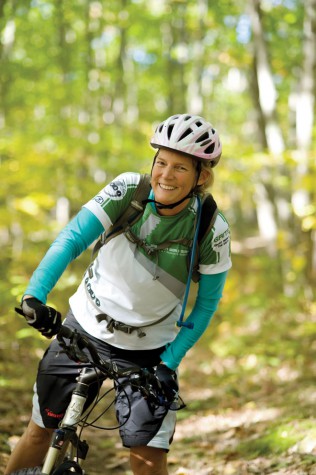 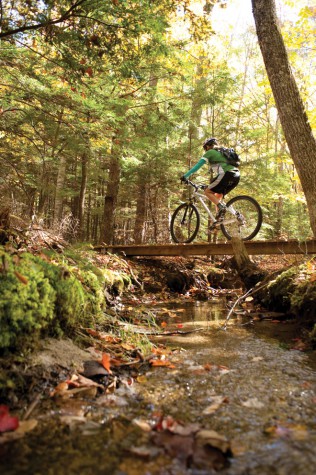 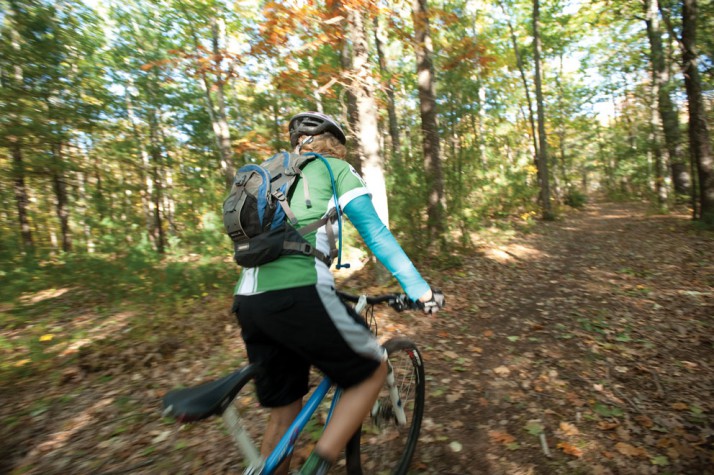 Cyndi Smith conquers a trail and sports Peloton One socks while riding in the Edwin L. Smith Land Preserve. 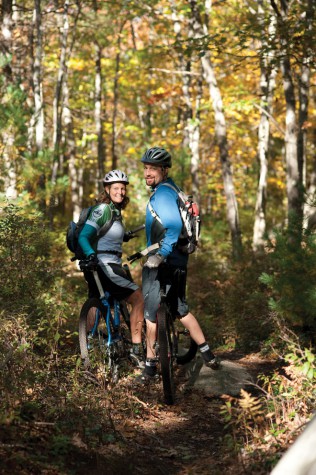 On the Presidential Trail

A story of mountain biking, conservation, and a POTUS and his muddy secret service

Fit riders on burly bikes are whooshing through a forest of young hardwoods, scaling granite faces of rock and splashing through furrows of mud. The underbrush is a blur of green. There is a feeling of pursuit. A radio cackles in the ear of the last man in the pack: “What’s your location?” “A2,” he huffs, “But I’m losing him; I’m ditching the bike.” Launching himself off, he hits the ground running, maple leaves whipping his face.

It would make a great opening scene in the Bourne films, but scenarios like this have played out in a 1,300-acre land preserve in Kennebunkport. The man the others are pursuing—because he is almost always the leader of the pack—is also a former leader of the free world. He is 65, and his name is George W. Bush.

“Mountain biking has been my life since I was ten years old,” says Brandon Gillard, manager of Kennebunkport Bicycle Company, the president’s mountain-biking base camp in Maine. Gillard’s parents used to playfully indulge his obsession, assuming that it wasn’t the kind of passion that becomes a career. But after college, Gillard opened a bike shop with his family, and the next thing his parents knew, their obsessed son was inviting them to the Oval Office to meet his friend and biking buddy, then-president George W. Bush. Gillard has gone to the White House Christmas party, has mountain biked at the president’s ranch in Crawford, hung out at Walker Point, and has gone to Camp David with his friend and fellow biking enthusiast Chris Smith.

“It all happened as a result of mountain biking,” Gillard says inside the former grange hall in Kennebunk, which is now home to the Kennebunkport Bicycle Company. “And it’s not because we’re millionaires or run Fortune 500 companies; it’s because we’re good people who enjoy mountain biking, and we’re family people—he appreciates that.”

Gillard first met President Bush a few weeks after a security detail visited the family’s first store, Cape-Able Bike Shop. Gillard gave the newcomers friendly advice and shared some trail maps. In turn, he was surprised with the offer to ride (after a security clearance) with the current president of the United States of America. They became fast friends. “The common thing that unites us is the love for family, open space, the community, and the outdoors,” says Gillard. “I gained instant respect for the man when in the first five minutes of the ride, knowing that I was a small business owner, he asked what I had for health insurance.”

Toward the end of the ride, Gillard thanked the president for a “once-in-a-lifetime opportunity.” The president responded, “Once in a lifetime? Who do you think I’m calling next time I’m in Maine?” Gillard and his buddy Chris Smith are now part of a band of riders who bike with the president and his security detail. Their name, emblazoned on their bike socks and other gear, is “Peloton One.”

When a winter storm wiped out the trails that Peloton One frequented in Arundel, Gillard and Smith approached the Kennebunkport Conservation Trust about mountain biking in their own backyard. At the time, the Trust didn’t have a policy about mountain biking, but they did have a perfect area for it, thanks in large part to “The Fire of  ’47.”

During the dry October of 1947, forest fires blazed across Maine from Bar Harbor to York. In total, more than 200,000 acres of woodland burned to the ground and nine communities were completely razed. In Kennebunkport, a wall of fire stretched for eight miles and incinerated 200 homes. It also decimated many woodlots. When the owners stopped paying taxes on the ravaged properties, ownership reverted to the town, and the lots eventually became part of the 1,000-acre town forest. In June of 2002, over 80 percent of voters in Kennebunkport approved the transfer of 741 of those acres to the Kennebunkport Conservation Trust.

Today, the Edwin L. Smith Preserve looks healthy. Water is the most noticeable feature, and it takes a gimlet eye to spot the char marks on old stumps and fallen logs in the underbrush. The area is home to an important vernal-pool ecology and a brook filled with trout. People have even spotted a bear, a fisher, and a bobcat in the woods, and plans are underway to construct a new trail to the highest point in Kennebunkport.

“You wouldn’t expect how large it is in this type of town,” says Tom Bradbury, the Trust’s director. “Your image of the town is all about the coast and the activity in the square, but we’ve been quite successful in setting aside some of the town’s best areas for public access.” Before the Trust took over the town forest, the area was inaccessible. With continued gifts of land, largely from private landholders, along with the support of the Trust for Public Land and a grant from the Land for Maine’s Future Program, the Kennebunkport Conservation Trust now stewards about 2,000 acres. The ever-growing Edwin L. Smith Preserve makes up just over half of its holdings.

“As large as the town forest was, virtually no one in town knew what it was like or had been on it because there was no easy way to get to it,” says Bradbury. “Our goal was to try and make the land both accessible and something special.” Bill Case and Bud Danis, both Trust board members and volunteers, had already begun to construct hiking trails through the property when they teamed up with Gillard and Smith in 2008. “We were impressed by their enthusiasm and passion,” says Danis, “but what won the day was their feeling of responsibility for maintaining both the trails and the vista. They wanted to give back, to create trails that weren’t eroding the landscape and that would bring people to places they wouldn’t otherwise see. They were grateful to us for providing a space to mountain bike, and we were grateful to them for helping to create it, maintain it, and take responsibility for how the landscape is treated.”

When President Bush first rode the trails, “it got everyone excited,” says Danis. “You could see the whole thing coming together. And whether you agreed with him politically or not, it’s neat that he’s just riding the trails and hanging out like everyone else—it’s neat to meet a president…anybody who says it’s not is lying.”

Gillard and Smith enjoy having something new to show the president each year as the projects progress. “Having the president involved has given it a lot of teeth,” Gillard says. “The Conservation Trust is interested in having him involved as a name and a face—and he has given money to the trails as well—but he loves it like they do and we do. He’ll be out there hooting and hollering, saying, ‘Awesome bridge guys, nice work!’”

For the past three years, Gillard, Smith, Danis, and Case have put in hundreds, possibly even thousands, of hours (they are having too much fun to count) into constructing seven miles of trails and reclaiming three miles of old fire roads. The president rides one eight-mile loop in under an hour. By comparison, a novice takes about twice as long, and is more likely to lose control on turns or when coming off a slope or grappling with the incline of a granite ledge, not to mention getting winded and needing water breaks. The president can do it without ever putting his foot down.

The four core volunteers have put time, t
hought, and research into the design. The varied terrain has the sought-after quality of “flow,” and although the landscape is relatively flat overall (mountain biking is akin to skiing—it has both downhill and cross-country adherents), it’s also challenging. Over time, Gillard and Smith have found that building the trails is as fun as riding them; the sport and the work go hand in hand. “You see so much you want to fix as you ride—it gets addictive,” says Smith.

Smith’s wife, Cyndi, watched from the sidelines for a few years, until the couple went out to the president’s ranch in Crawford, Texas, where Cyndi did the same ride as the guys—on an ATV. “And I just didn’t want to be that wife,” she says. Back home in Maine, she began hitting the trails almost daily. Eight months later, Cyndi had lost both weight and time: she was 55 pounds lighter and on “presidential pace,” good enough to ride with Peloton One.

The Smiths and Gillard, who are all a couple decades younger than the president, are all motivated by his level of fitness. “I’m more fit now than five years ago when I met him,” says Gillard, who is in his thirties. “I was riding with him once and he said, ‘Have you been riding much?’ and I said, ‘No, I’ve been really busy.’ He said, ‘Hey, I’m riding!’ He’ll call you out in a second. I thought about that and changed my priorities. I started getting up earlier in the morning and going out with these guys [the Smiths]. You just feel better the rest of the day.” The president usually rides during most of his vacation days in Maine.

The long-term goal of the Trust is to piece together enough parcels to create a greenbelt, from Cape Porpoise on the southern coast through the northeast corner of town (where Biddeford, Arundel, and Kennebunkport meet), that can be traversed on foot or bike. For now, the balance of mountain bikers and hikers is working, but more importantly, people are using a community resource and appreciating the hard work of the volunteers. “It’s a tribute to volunteers, how much they can do, and what they can accomplish,” says Bradbury of the trail network.

“It’s one of those things: good energy makes good stuff happen,” says Danis. “We’ve had great benefactors and great pieces of land. Unique properties come up and we think, ‘Oh that will never happen,’ but the stars align or money comes in, and next thing you know it does. And the coolest thing is that it belongs to everybody—you don’t have to be a resident or a member. It doesn’t matter who you are; you can come out for a walk in the woods, or a mountain bike if you dare.”