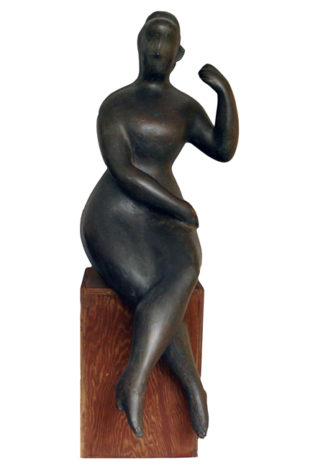 Elie Nadelman, born in Warsaw in 1882, had established himself as an artist in Paris by 1905 when he exhibited at the Salon d’Automne. By 1907, he was a regular visitor at the Saturday evening salon of Leo and Gertrude Stein. He had his first solo show in 1909 at the Galerie Druet, which was a leading gallery in Paris at the time. Picasso was inspired to create his first cubist sculpture of a woman’s head after seeing Nadelman’s work. Since its creation, Seated Woman with Raised Arm has been widely exhibited. The retrospective exhibitions held at the Museum of Modern Art in 1948 and at the Whitney Museum of American Art in 2003 showcased this piece. It has also appeared in numerous books and publications, perhaps most famously in the May 24, 1948, issue of Life magazine. Most recently, the sculpture resided in the Tom Veilleux Gallery on Market Street in Portland’s Old Port.