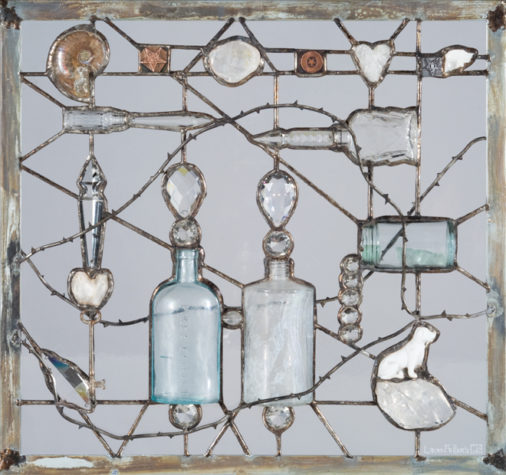 Composing the piece is the most arduous part of Fuller’s process. She creates a grouping of objects, then adds and subtracts as she arranges them until a story emerges. Cutting the glass so that it will support the work’s many disparate elements is the most challenging task she faces—each piece must be carefully engineered so it won’t collapse or fracture when it is hung. The hard, geometric lines of the joined glass are softened by the organic flow of the thorn-encrusted vines.

The piece, titled Starry Night, is punctuated by three vintage American Legion stamps in the shape of stars across the top. An ammonite fossil in the top left corner represents permanence and the eternal spiral of life and love.

Crystal prisms, a recurring theme in all of Fuller’s work, are used to capture and translate ambient light. They are haunting reminders of times passed, bending light to expose the color inherent in the seemingly colorless.

Fuller’s work incorporates the rare and the quotidian, the precious and the mundane. Found objects combine in a fragile bed of glass, held together with patinated copper foil and framed in zinc. These objects tell a story or a poem, woven together with thorny vines that tie seemingly disparate elements into a cohesive and thought-provoking whole. This piece is Fuller’s paean to enduring love and marriage.

Fuller purchased a lot on eBay that contained a cache of antique porcelain figurines from Germany, two of which were incorporated into this piece. The figure of the dog represents the loyalty and fidelity of an enduring marriage. In the lot, she also discovered a tiny angel’s wing, which she included to signify love taking flight.

Laura Fuller on her work: “I recently made a diptych—a kind of ‘his and hers’ piece—filled with objects collected by a couple (coins from his childhood, a lock and key, her mother’s flower bottle, etc.). They brought these objects to the studio and said, ‘make whatever you want for our front window.’ Their diptych is a romantic, fairy-tale narrative of the two of them finding each other. It’s an honor to be entrusted with peoples’ sentimental, irreplaceable treasures and to make something they’ll want to look at every day—hopefully for the rest of their lives.”