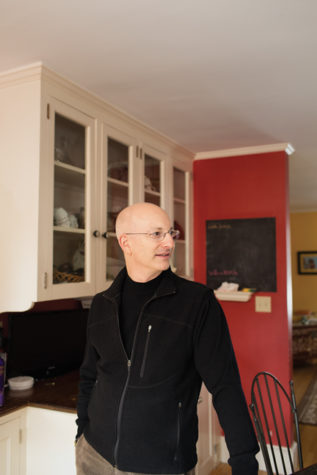 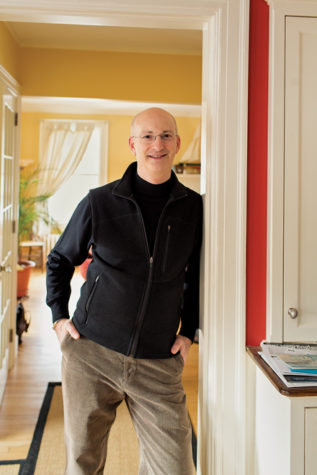 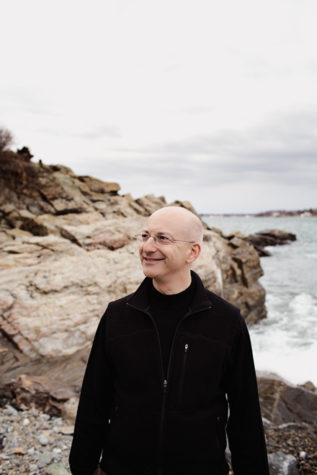 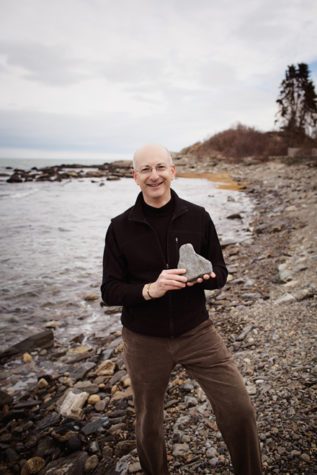 Cohen near his home in Cape Elizabeth, on the lookout for heart-shaped rocks to add to his collection 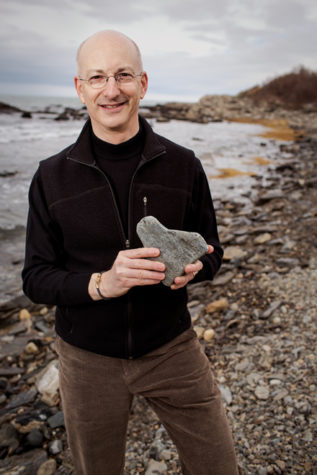 Cohen near his home in Cape Elizabeth, on the lookout for heart-shaped rocks to add to his collection. 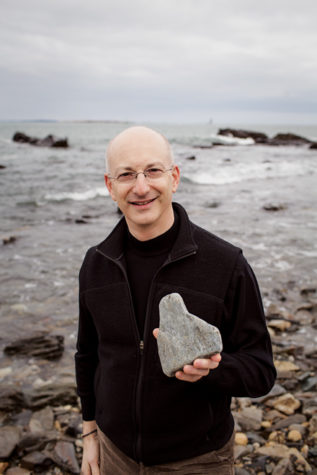 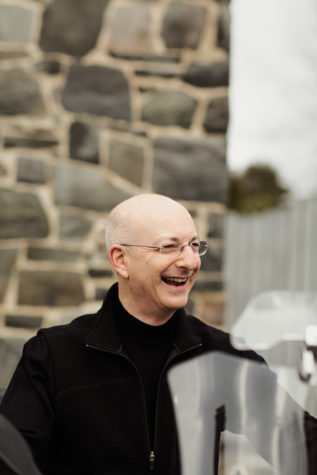 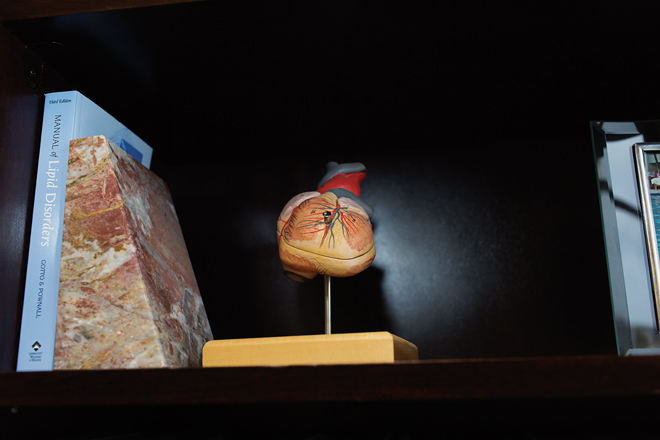 A shelf in Dr. Mylan Cohens South Portland office, holding a heart model and some reference books related to cardiology. 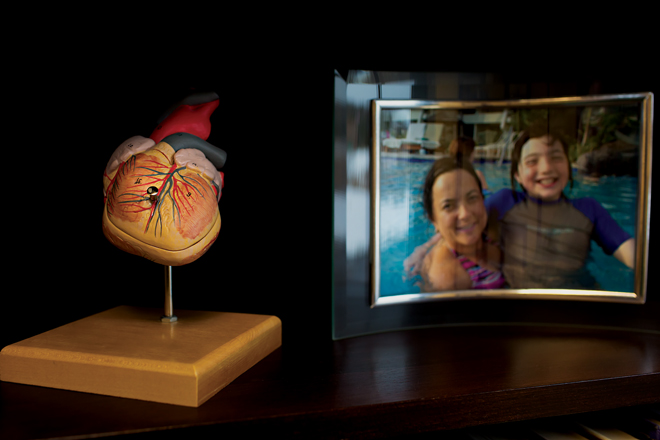 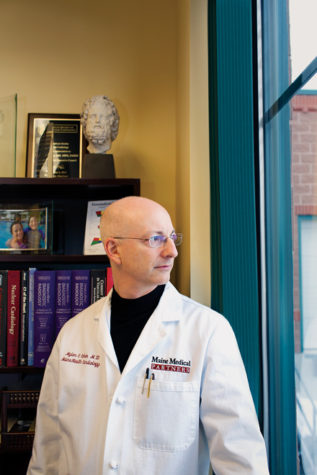 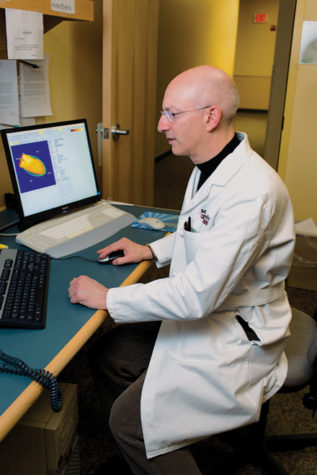 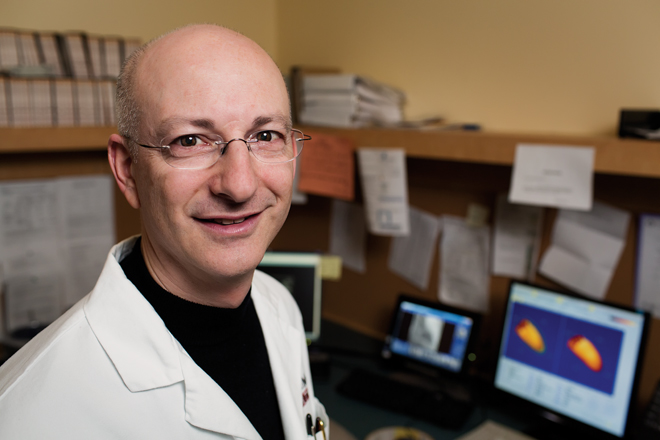 Our hearts circulate six quarts of blood through our bodies three times every minute, traveling 12,000 miles every day, in vessels ranging from the diameter of a garden-hose to one-tenth of a human hair. Our hearts beat about 100,000 times in a day; at rest, they work twice as hard as the leg muscles of someone sprinting. Yet if you’re anything like meif the organ is discreetly at work and high school biology is long lost on youyou forget what’s miraculously going on inside of you. Dr. Mylan Cohen doesn’t forget. Nor does he speak in a slew of astonishing facts. Of course the physiology of the heart fascinates him. How could it not? In his office, the talk is of radionuclide scanning and other advanced imaging modalities. He and the valve team are seeking alternatives to open-heart surgery in the case of a leaky mitral valve or stenotic aortic valves. For Cohen and his colleagues, the focus is on the very real people in possession of these hearts, and the work is saving lives.

Cohen was not always going to be a physician. The class president at Presque Isle High School might have been a political science major or a theater major. Although he comes from a family of physicians and grew up with great admiration for his grandfather, who founded the Boston Evening Clinic, the first evening clinic to provide low-cost or free health services to low-wage workers, the young Cohen dreamed of pursuing a career in oceanography or marine biology; he wanted to study ecosystems and organisms in refreshing, far-away venues rather than what he thought of as a typically dreary healthcare setting. A visit to his doctor uncle in northern Michigan changed his mind: “He invited me into his office and I got to see him interact with patients and something clicked for me. That healing interaction really turned me on to medicine.” Cohen’s uncle was an “old-fashioned, rural, solo practitioner.” He was also a Renaissance man who filled his home with books, coins, stamps, and art. The variety and depth of his uncle’s interestsin his work, but also in the world at largemoved the young man to study medicine.

After graduating from the University of Maine at Orono, Cohen went on to the University of Vermont College of Medicine, where he met Dr. David Ferguson, who now practices in Belfast. “It was really watching him lead rounds that did it. I would say that if there was a single individual who really prompted me to go into cardiology it was Dave,” says Cohen. He completed his internship, residency, and fellowship at what was then the New England Deaconess Hospital in Boston, where he encountered others who saw his extraordinary potential and influenced his career path early on. Cohen was encouraged to enroll in a program on clinical effectiveness at the Harvard School of Public Health, which led him to eventually obtain a master’s degree in public health. His interest in cardiac imaging took him to New Haven, Connecticut, where he worked with the physicians at the forefront of nuclear cardiology who would eventually establish the American Society of Nuclear Cardiology. (Cohen went on to become the organization’s president in 2010.)

After finishing his fellowship, Cohen was invited to stay on staff and lead the nuclear cardiology section at Deaconess Hospital, which was in the process of merging with Beth Israel Hospital at the time. In other words, his career was taking off. “But at the same time,” Cohen remembers, “I saw a person I had worked with, a person with a Nobel Prize, practically have his head handed to him. Because of a hospital merger, it was, ‘Sorry you’re not really wanted here anymore.’ I’d gotten married, we’d just had a baby,and I was thinking, ‘What kind of security is there in a system like this?'” When the chance came to interview with Maine Cardiology, Cohen took it.

The cardiology groupnow known as Maine Medical Partners MaineHealth Cardiologyhas since expanded fourfold. “We offer just about everything that is available in cutting-edge cardiac diagnosis and treatment,” says Cohen, “and patients are still treated with more individuality than they are in large centers in metropolitan areas. I know from experience.” Cohen is currently the medical director of noninvasive cardiology and oversees noninvasive cardiac imaging as well as a clinical professor of medicine at Tufts University School of Medicine. On any given day you might find Cohen with a patient in an exam room, interpreting noninvasive cardiology studies, leading the charge on clinical studies, or rounding on patients who have been admitted to the hospital. His work is remarkably multifaceted, but Cohen’s draw to “that healing interaction” has not faded. Like his uncle before him, Cohen’s favorite part of the job is “to be able to make a diagnosis, treat a patient, and see them feeling better.”

Dr. Mylan Cohen is the definition of friendly: purely kind and companionable. When he breezes through the waiting room of the South Portland campus, his patients look up and smile with admiration. He beams admiration back. He also rides a motorcycle to work when it’s nice out (of course he was voted class president) and travels east by ocean in his J/109 with his wife and teenaged son. “We’ve gone beyond Bar Harbor and I’m trying to go farther than that sometime,” he says in the same energized voice he uses to talk about three-dimensional imaging technologies, surgical advances, and a medical success story. Farther, indeed. Here in Maine.