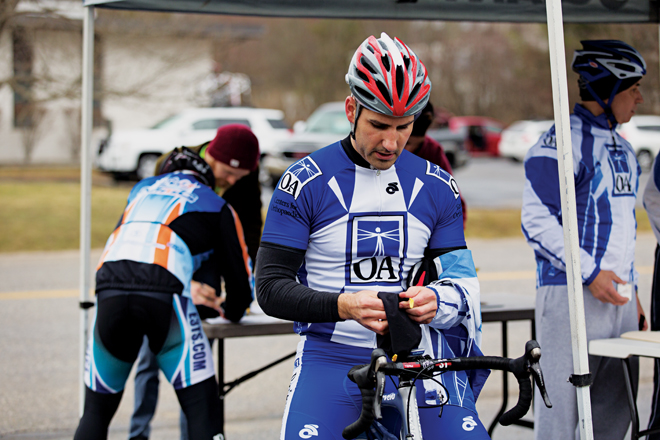 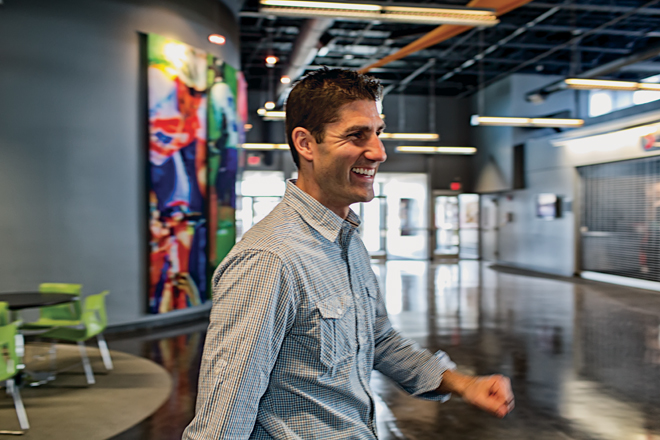 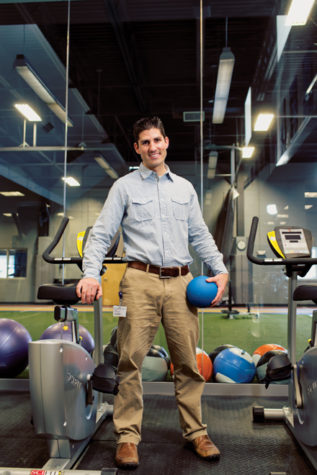 Jared Buzzell is the manager of physical therapy of the OA Performance Center in Saco, where he created a triathlete team. 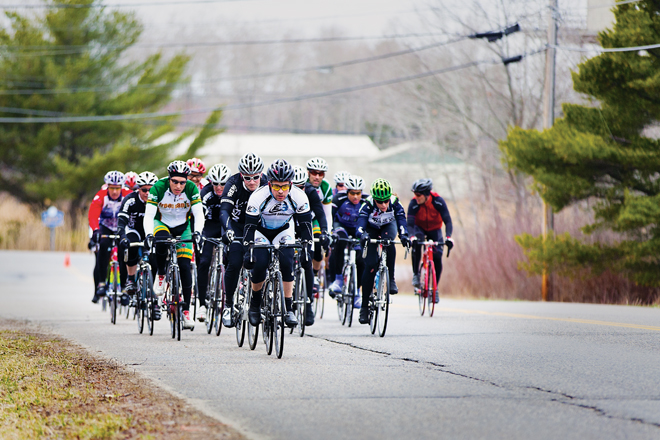 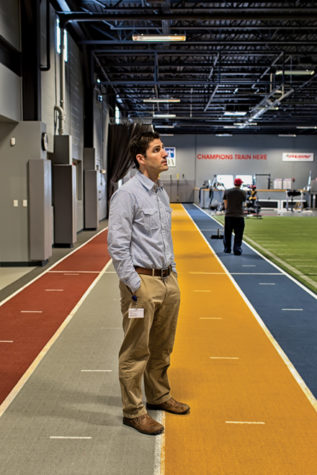 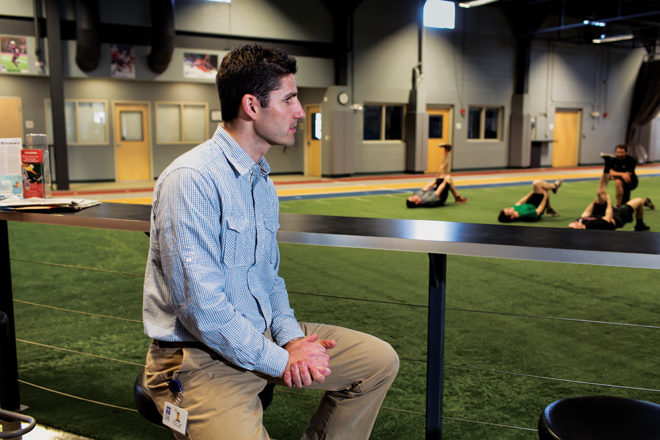 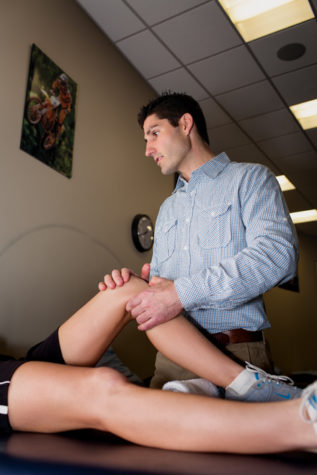 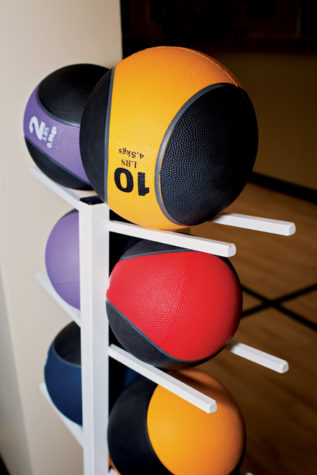 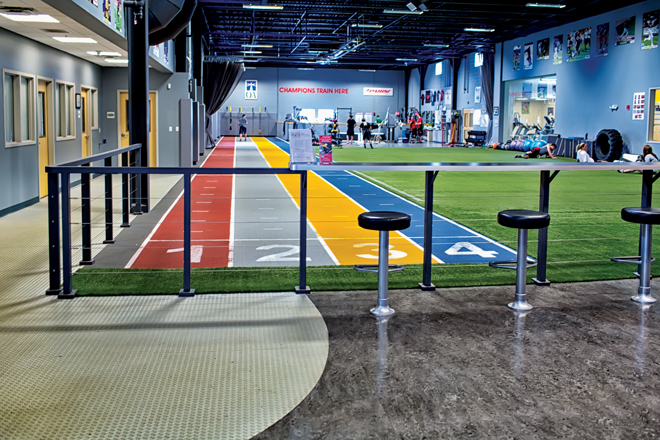 The Sacobased Bill Parisi Speed School was recently voted the number one franchise of its kind in the country. 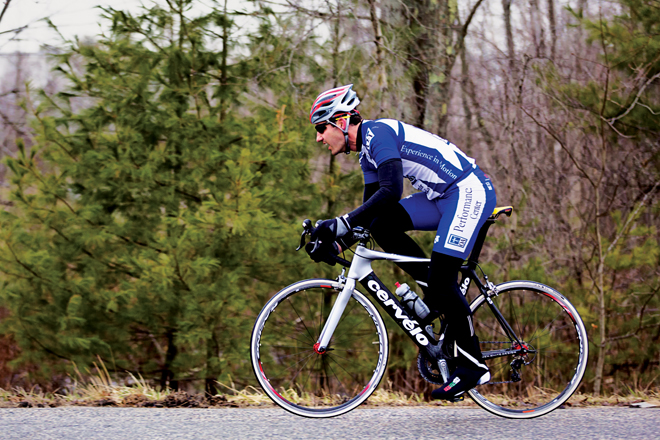 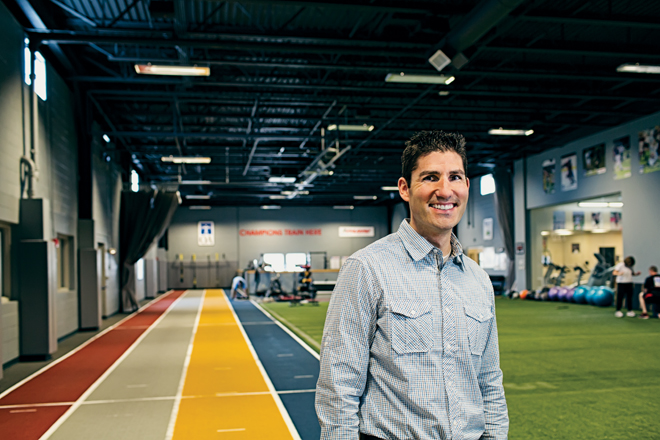 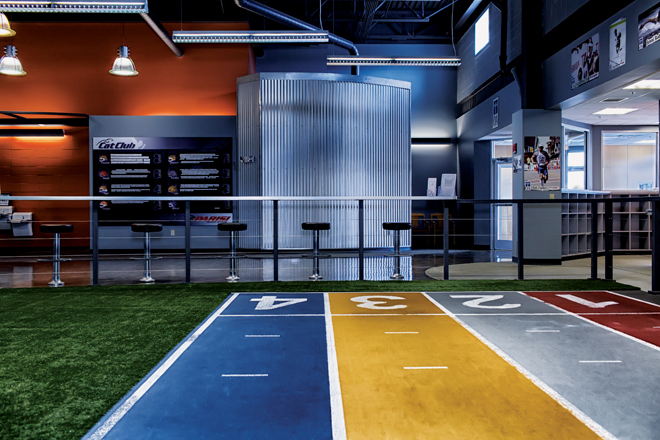 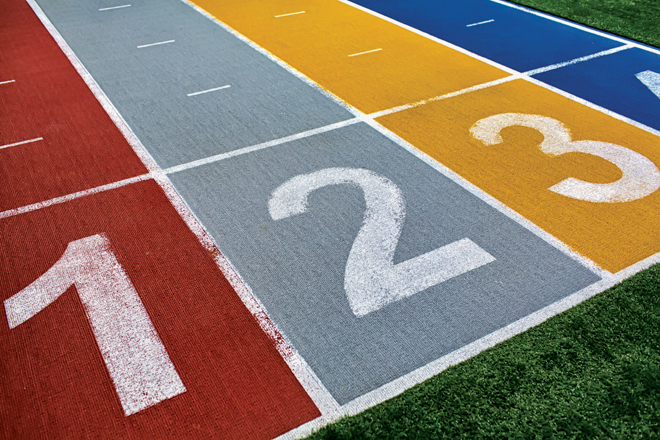 Turning off of I-95, I take the exit marked “Industrial Parkway” and find myself on a typical rural road skirting highway, charmless but for the gilded “Welcome to Saco” sign and a little league field, it’s all hastily constructed storage units, company headquarters, and gas stations. I bump along a pot-holed road toward the building anchoring a dead end: my mammoth destination, the OA Performance Center and the place to find Jared Buzzell, the physical therapy manager. Once inside, I’m engulfed by the scope of the center, with its high ceilings and large, circular front desk, set an impressive distance from the entryway. There’s an indoor turf track to my left, and neon pieces of furniture speckle the space. As I take it all in, a fit, fresh-faced fellow approaches. While we shake hands, I tell Buzzell how impressed I am; he beckons me toward the ice rink and Michael Phelps Skill Center with a possessive, almost kidlike enthusiasm.

OA is organized around a theory of continuum carefrom the clinical setting to the physical therapy space to the Performance Center’s Parisi Speed School, where patients can work with experts to adjust the mechanics of how they move to become more efficient athletes. Working under the same (really high) roof, physicians, therapists, and instructors are in constant communication with one another as they see patients from surgery to recovery. The clinic is housed in a nook of the center with a more typical feellow ceilings, soothing colors on the walls. Ranked one of the top 200 outpatient facilities in the U.S., OA sees patients from as far away as Las Vegas to undergo knee surgery. Olympic hopefuls based in Boston come to Maine to work with Buzzell and his team. Given all of the people hard at work in the open-concept physical therapy space, the mood is calm, which seems to be a testament to the manager’s confident yet comforting demeanor.

Next, Buzzell brings me to the track. Not all patients round off their treatment at the Parisi Speed School, but many do, and othersfrom youth soccer teams to the Portland Piratescome to the center for the Speed School alone. Based around the methods of performance enhancement hero Bill Parisi, this Saco-based franchise has been voted the number one in the U.S. The Performance Center’s motto is brandished on the wall over the track, surrounded by blown-up photographs of professional athletes with connections to OA. “Speed is a skill,” it reads, disclaiming the popular belief that a person is simply naturally fast or naturally slow. Both Buzzell and the Performance Center’s manager, Stanley Skolfield, emphasize OA’s effort to recruit young athletes to help develop good mechanics early and to do their part to stem the tide of childhood obesity. Skolfield says, “I tell a kid, how about I make you way faster, way stronger, and teach you how to jump higher?” The approach is refreshing: a challenge rather than a warning.

In Buzzell’s case, the desire to rise to a challenge hasn’t subsided in later years. He is an impressive triathlete, having competed in the Ironman Lake Placid and even going so far as to compete in the World Championship for the Half Ironman. At 17 though, Buzzell was a basketball player and a part-time trainer at his hometown gym in Vermont, where he’d run into physical therapists at work with their patients. A hands-on job away from a desk appealed to him, and he went on to receive his BA in physical therapy from the University of Vermont. He joined OA in 2000 and has lived in Maine since.

The personal/professional divide hardly exists in Buzzell’s world, especially since he’s created an OA triathlete team that trains regularly at the center. As Buzzell’s love for endurance sports grew so did his knowledge of the biomechanics of the running and cycling athlete. Thanks in part to OA’s emphasis on continuing education, he’s devoured the latest and greatest information on the subject, become certified in bike fitting, and developed a running program consisting of video analysis, and joint-angle and vector measurements.

Chris Ebbrecht was referred to Buzzell in 2009 for the common running injury plantar fasciitis. By then he’d seen numerous doctors and physical therapists to no avail. In addition to addressing the injury, Buzzell analyzed and adjusted Ebbrecht’s running technique and got him into the correct footwear. Problem solved. But in September of 2010, Ebbrecht severed the arch of his foot. Dr. Dirk Asherman of OA did the surgery and Ebbrecht found himself in the capable hands of Jared Buzzell again, and yet again a few months later, after he tore his left meniscus. “Jared took a whole-body approach to rehab,” says Ebbrecht. “He found muscular imbalances from one side of my body to the other, and strengthened the weak areas to bring me into balance.”

In 2012, after having only run six miles once in two years and enduring what had been described to him as “a career ending injury,” Ebbrecht trained for and completed the Old Orchard Beach Half Iron distance triathlon.
Both Ebbrecht and Buzzell are now immersed in the triathlon community. When I ask Buzzell what endurance sports have brought to his life he pauses before identifying a few crystalline points: the hours he puts into training require him to manage his time better; he’s never had to worry about dieting; he is physically and emotionally energized by the competition, by those anxious minutes at the start of a race and the elation at the finish. “And it doesn’t have to be Ironman, it doesn’t have to be a triathlon,” says Buzzell. “Set a goal, get on some kind of program, and do a 5K.”

When I ask him if he works exclusively with athletes, Buzzell counters with a provoking question”What’s your definition of an athlete?”and goes on to say, “We see workers compensation injuries. That’s an industrial athlete, right? I mean, I think we’re all athletes in what we do.” Whether the goal is to pick up a grandchild or run a marathon, our ability to move matters a lot to us. Buzzell’s key advice applies to everybody. Know your body type: if you’ve got a lot of inherent mobility in your joints, you should try activities that are more stability-focused, and vice versa. “Sixty-five percent of runners are injured annually,” says Buzzell, “and it boils down to bad training methods or poor mechanics. Those are two very fixable things.”

The take-home point? Know your limits.

Know your limits, and gradually exceed them. Set goals, and break them. Then repeat.