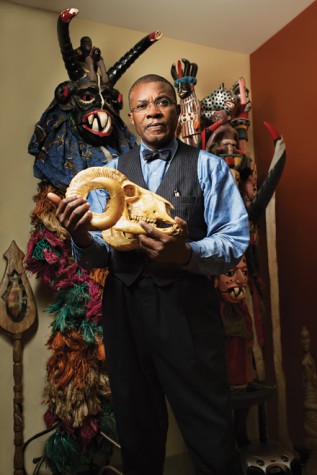 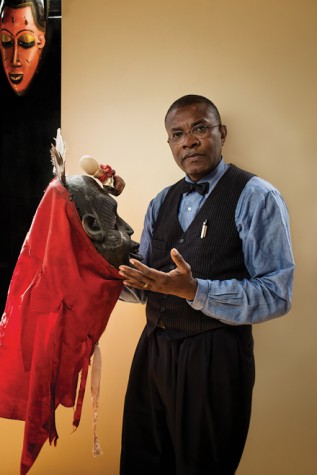 Through his world-class collection of sub-Saharan African art on Brown Street in the heart of Portland, Oscar Mokeme is expanding our understanding of African cultureseducating, inspiring, and healing. 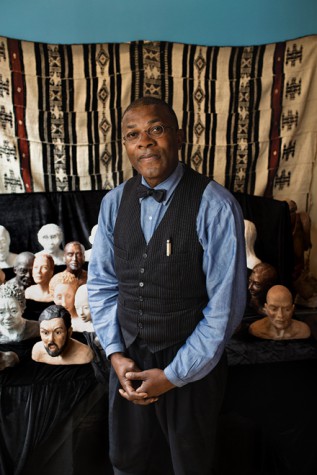 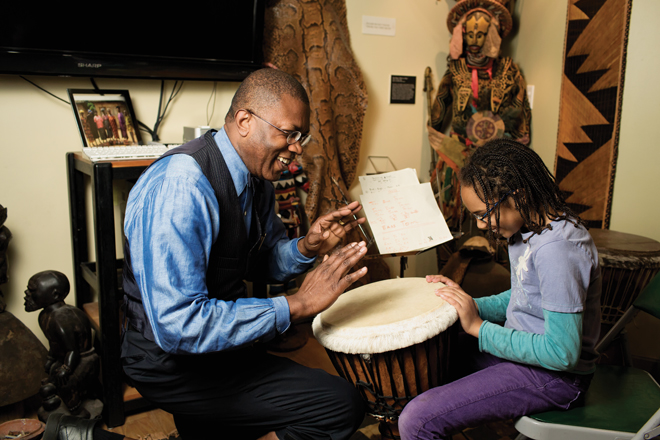 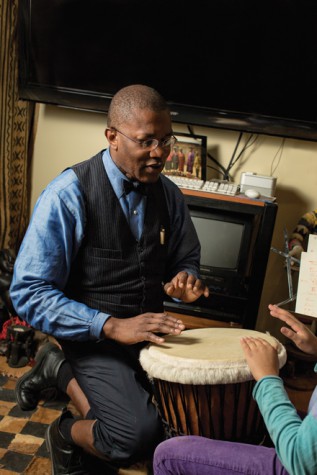 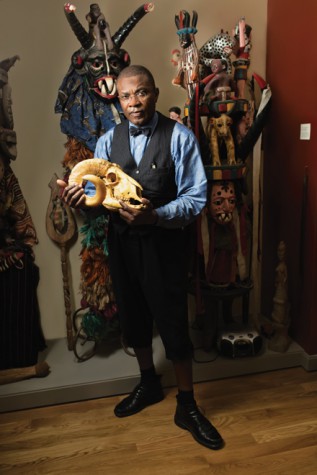 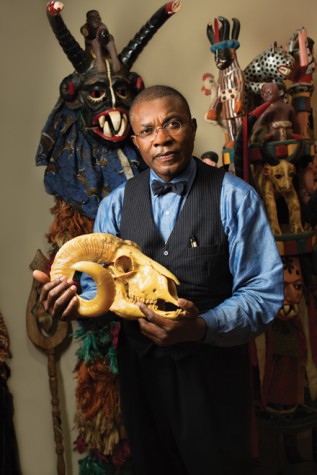 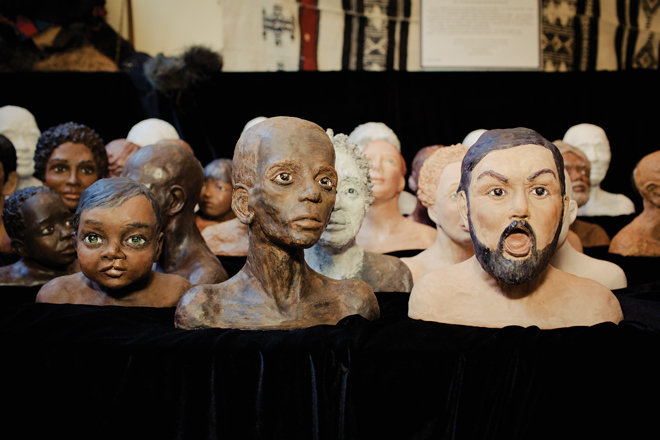 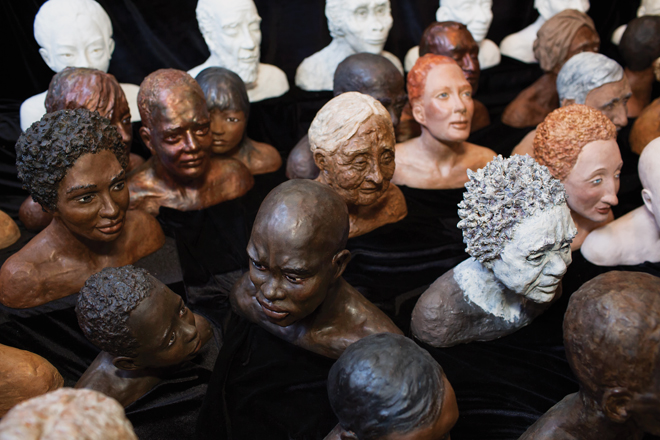 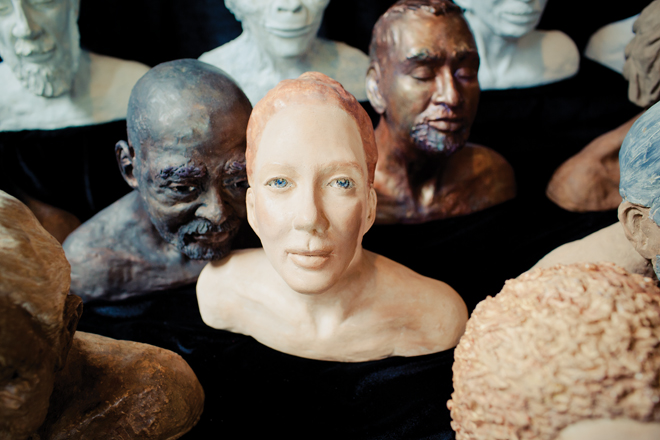 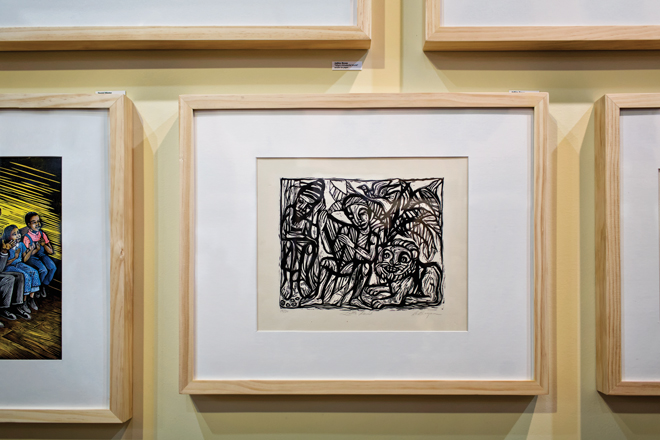 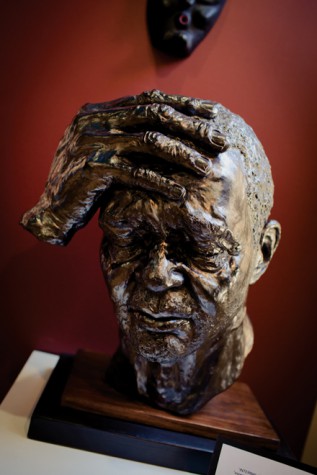 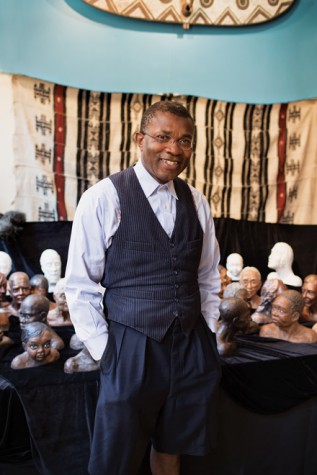 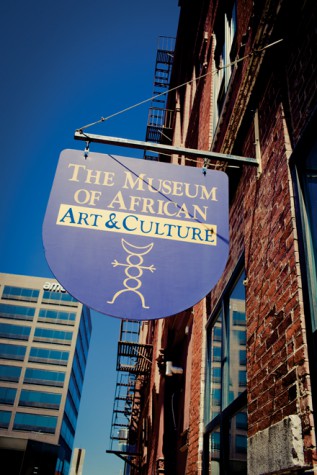 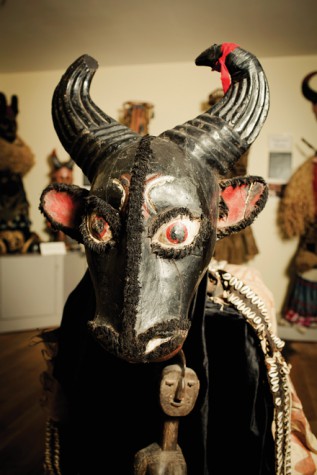 Oscar Mokeme and the African Center for the Sacred Arts

The sky is clogged with clouds and the air thick with tiny pieces of the streets being drilled apart around our Old Port office. I can hear the machines through an open window across the hall while on the phone arranging to meet up with Oscar Mokeme, a co-founder and executive director of the African Center for the Sacred Arts, a Nigerian-born healer in the Igbo tradition. I have been saving our conversation like a token in the back pocket of my busy schedule and want to cash in on this dreary Thursday. “Maybe you’re free now?” I venture. “Yes,” he says, “Of course I am free.”

Fifteen minutes later, at the African Center for the Sacred Arts, I find a note taped to the door: “Be back at 2:35.” It is 2:40. I walk around the block and chat a bit with the artist also waiting for the museum to reopen. Mokeme appears just before the rain starts, a handsome middle-aged man in a bow tie and vest pushing through the door, exclaiming in a comically plaintive voice, “I was hungry!” I’m amused; the woman beside me is less so. “Oscar, I called you about my piece,” she says. “How can I have your piece?” Mokeme asks. But there is a metal sculpture waiting for her inside the door. “I have your art,” he clarifies. “I cannot have your peace.”

If you’ve talked with Mokeme, you know that words are very important to him. He is good with them, acutely aware of their meanings and distrustful of colloquialisms (“Are you free?”) that don’t pay respect to those scraps of sound we require to communicate. I might have found this nit-pickiness grating if I had met him in a different sort of mood, if Mokeme didn’t smile all twinkly while he tried to push my buttons. He’s a happy provocateur, a person with a knack for taking the familiar out of context. Words are symbols, after all, and Mokeme’s life’s work is dealing in symbols, in coded objects like masks that make people question what they know—to sneak up on it, startle it, expand it. He is on a mission to inspire, and thereby heal: “When you are inspired you are in spirit,” Mokeme tells me, “and that is where healing begins.”

Few fine-arts folks I’ve encountered begin a conversation like Mokeme, talking about the power of art to question, inspire, and heal. Maybe that kind of talk is too flesh and blood for vast marble and placard kinds of places? Maybe it borders on cliché? He seems too fearless to care, too intelligent to concern himself with smarts.

The idea for the African Center for the Sacred Arts began in a teenaged Mokeme, a boy from Nigeria who had won a World Health Organization essay contest and was traveling to museums throughout Europe under the auspices of the organization. He visited the likes of the Louvre, the Vatican, and then, in a museum in London, he saw a shrine not unlike his grandfather’s back home in their village. “To see something so familiar in such a foreign context did something to me,” says Mokeme. “In the Western world these things [like shrines] are considered art. But in African culture they are not meant to be art. Like books, documentaries, or dictionaries, they are objects that communicate ideas based on the convention of the societies that made them.”

From his perspective, the visitors to that London gallery were more or less trying to absorb the content of a book without turning a single page. And yet, despite their uninformed approach, Mokeme saw that the shrine still had the power to elicit emotional responses in people across cultures.

Descending from a long lineage of royal Igbo healing practitioners, Mokeme was essentially born a healer. But at the museum in London, however subconsciously, he conspired to be a teacher as well, to collect a library of objects he would share to help heal.

He began collecting as a young man living in England, and later in Boston and Pennsylvania, returning to Africa as often as he could. On a train ride from New York to Boston over 20 years ago, Mokeme encountered another collector of sorts—Peter Erskine of the Maine-based bohemian stores Mexicali Blues imports clothes, jewelry, and home wares from Nepal, Thailand, and Mexico, among other places. On the topic of travel and artifacts, Mokeme and Erskine struck up a friendship that would span decades. In 1989, in something of a rut, Mokeme visited Maine at Erskine’s urging. He met kind people and saw beautiful places; a weekend in Maine turned into weeks, years, a new-found home. Still he kept collecting. Alongside another friend and mentor, Victor Antos, Mokeme cleaned offices at night for the money he invested in his idea. With Antos’s help, the idea first came to fruition as a shop in the Old Port. Later it became the museum, and a center for healing.

The museum has been called by many different names over the years—another testament to Mokeme’s preoccupation with words, his very literary appreciation for precision. Now it is officially known as the African Center for the Sacred Arts…Where Healing Begins at The Museum of African Art and Culture. “This may be the smallest museum in the world,” says Mokeme, “but we’ve got a world-class collection.” Abundant, audacious, divine: many adjectives may be aptly applied to the sub-Saraharan African masks, figures, ceramic, bone, and composite objects Mokeme has amassed over the years. The museum is small, tucked between Monument Square and Maine College of Art, but it is impressive nonetheless.

My afternoon with Oscar Mokeme goes like this: I ask questions about the objects that intrigue me and he answers them. (It would go like that for you, if you were to visit him.) The masks on display seem more like totems to me, entrancing faces imbedded in a long cluster of visual symbols. Mokeme translates. One mask offers a lesson in patience and another a lesson in peace. He tells me peace is like the water in the Land of Mercy. I shake my head, unfamiliar with the reference. “Peace is like well water,” he tries instead. “We have peace within us, buried deep within us. It’s always there. It has always been there.”

I am glad someone else is nearby to learn about the fleur-de-lis-like marks branded on the foreheads of the mask faces, and a little disappointed when someone else scoffs at the five dollar admission price and enters the rain instead of our conversation (although of course I’ve been there, done that). Mokeme continues, unphased, to explain that the marks are symbols of self: “A person with adequate knowledge of self can withstand any obstacle. You can climb the ladder of success on the right wall and get to the top and feel complete. But when you lack self-knowledge, people will define for you who they want you to be. A person with a lack of self-knowledge can climb the ladder of success on the wrong wall. When they get to the top, they feel emptiness, they feel something missing.” For Mokeme, it matters most that you work with patience and with love: “You can be a street sweeper. Be the best. You can be a medicine man like me. I don’t make a lot of money, but I’m fed.”

When I ask him about his other healing work he winces. Wrong word choice. “What do you call it?” I ask. “I call it being,” he says. That’s a big fat esoteric answer, but in retrospect I get it. “Healing work” is a blanket phrase that does not acknowledge the specificity of what he does, which is deeply rooted in his culture and the practice of his ancestors. For Mokeme, “being” a medicine man is not something learned so much as known. Since he could walk, he woke in the early hours of the morning and trudged many miles to the head of the river to offer prayers to the water the villagers scooped up at sunrise. This “healing work” is ingrained in him. Like most spiritual practices, his resists the intellectualism he so deftly applies to his study of art and objects. He tells me it involves prayer and sometimes touch, but it’s hard to describe beyond that. “In that state I’m not practically or physically there. It’s like a dream state,” he says. His voice shifts to speak of it; he talks more quickly and becomes quieter, uncomfortable almost. I turn talk back to the boy and the river. “I hated it,” Mokeme says about the praying, laughing. I ask him why and he laughs harder. “Would you want to get up in the middle of night to stand in a cold river?”

No one can be so serious so often without a sense of humor. Oscar Mokeme has a good one. He finds life basically fun, seems always on the brink of laughter, always ready to lighten the loaded stories he tells. They’re huge, these stories, originating continents and centuries away from the moment we’re in together, Mokeme and me. It had thundered and poured throughout our conversation; as it came to its natural end, so did the storm.

I felt a little out of context myself when I exited the museum. Free Street looked as familiar as ever but I felt different—rattled, wondering how I would tell this story. It’s hard to know what to make of all the objects and amorphous ideas you’re bound to encounter at the African Center for the Sacred Arts. It’s the kind of place you can get a lot out of if you’re willing to give a little. What I know for certain: Oscar Mokeme’s museum is small, but no small gift for a city that takes art and inspiration in big doses.