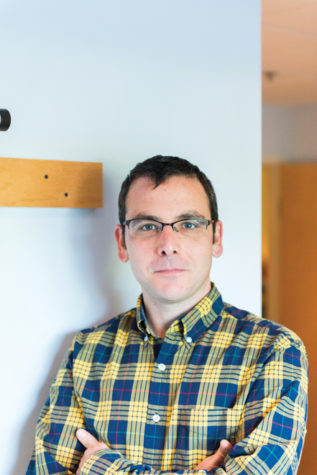 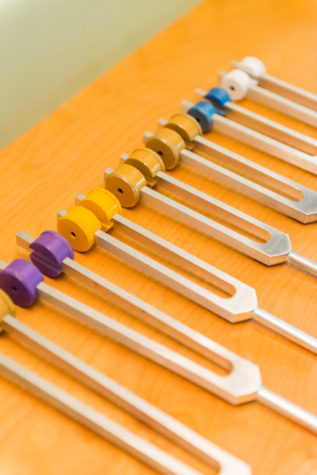 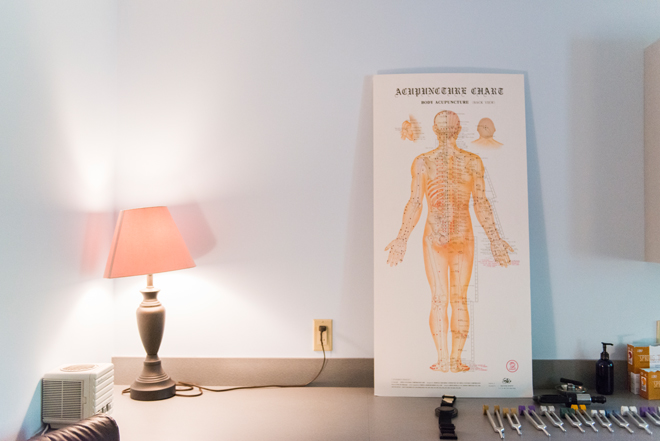 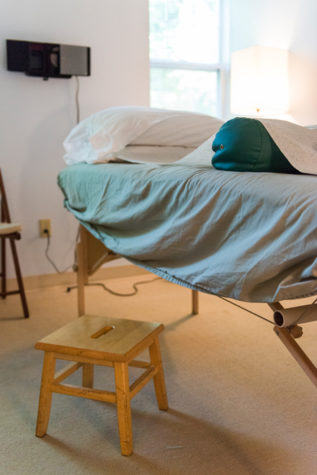 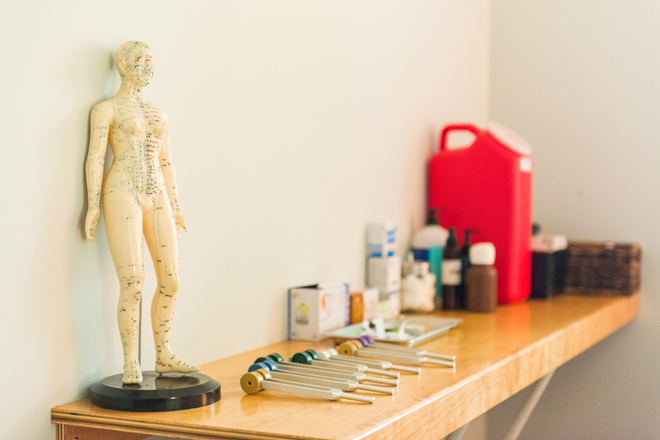 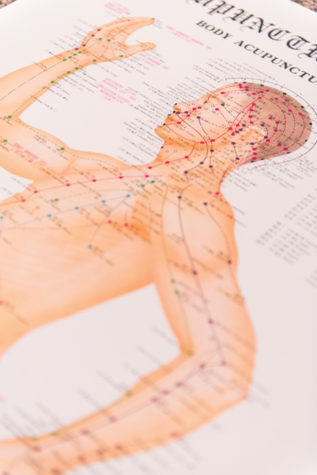 "As amazing as western, allopathic medicine is, being able to sit down with a healthcare practitioner for an hour and having their undivided attention is so unique in our insurancedrive world," says Jason Stein. Pictured here, a map of the meridians and acupuncture points that guide his practice. 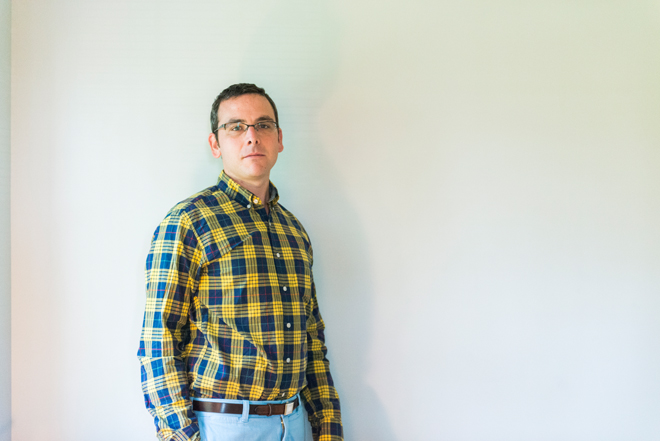 In Stein's personal life, he tries to practice what Traditional Chinese medicine preaches: "I try to employ what the Chinese knew, which is just amazing. Relaxation. Meditation. Exercise. I try to be in the moment and pay attention to my body."

“The day before you called, I’d been attacked by a rabid fox. Right here. Like, near the Home Depot,” Jason Stein says to me after we take our seats in the clean and comfortably sparse waiting room of Rocky Coast Family Acupuncture. “I’m from New Jersey, so my mom was like, ‘that’s what you get for living in Maine.’ I was like, ‘Mom, I was at the mall.’” Right off the bat I like Stein’s occasional “likes,” his lack of pretension, his unselfconscious calm. His voice is neither particularly slow nor soothing and his dress is a tad urban—dark glasses, collar poking crisply out of smart sweater, tattoo covering forearm, shoes shining the right amount. He’s hardly said anything before he apologizes for talking too much.

Later, I will easily reconcile my first impression of Stein with what he says over the course of our conversation about what an honor it is to employ acupuncture and other ancient tools of Chinese Medicine. “It’s not about us,” he tells me. “We’re not the ones with the answers. We’re bringing these tools to people—acupuncture, herbs, meditation—that have been carried forward for generations and generations.” He talks about what an honor it is to meet people on such intimate terms, to hear their stories and help bring them back to balance. One of the reasons I know he means all of this is because it sounds like he’s never said it before; in fact, I almost feel a little bad asking him to articulate in potentially clichéd terms a sense of gratitude and humility that he so naturally expresses in his way of listening, his willingness to divulge slightly self-deprecating anecdotes, the adorable rapport I witness between him and his wife and colleague, Beth Herzig. With him, there’s no schtick, no judgment, just passion for what he does. Openness. His kindness must be a great comfort to the people who go to him with their aches and pains and hopes—especially hopes as tender as fertility.

One of Stein’s infertility patients had been told she was hormonally and anatomically sound by her doctors, but sought out acupuncture after months of difficulty conceiving. From a Traditional Chinese point of view, heat—or her lack of it—was a factor in her fertility. The patient had a history of digestive complaints and had also been exercising hard for years, which contributed to her tendency to “run cold,” especially in her extremities. In Stein’s words, “the burner [had] gone out,” and the “blood flow to the uterus was slowed down.” In addition to an acupuncture treatment designed to offset her particular imbalances and increase blood flow, Stein recommended that the patient not exhaust her blood so much by exercising all the time, to slow down on her runs, and to avoid ice water. The combination brought some heat back to the uterus, and soon into the treatment she became pregnant.

This is just one of many stories, of course, but it’s proof of the individualistic approach acupuncturists take toward their patients. And it’s exactly the sort of story Stein is so honored to be a part of. “The idea of treating different people the same way makes no sense to me,” says Stein. “The Chinese have this really cool concept that the heart—which is where the mind sits—has these meridians that flow directly to it from the uterus. When the heart is calm, the uterus is able to function optimally. When someone is stressed and constantly secreting cortisol or having like, a fight-or-flight response, that impacts fertility.” In other words, there’s no single switch to flip.

The use of fertility treatments, including in vitro fertilization, has doubled in the past decade. Meanwhile, acupuncture-based fertility treatment—both as an effective treatment on its own, and in combination with conventional Western medical treatment—is also gaining popularity. Stein and Herzig have been treating infertility, among many other conditions, since opening Rocky Coast Family Acupuncture in 2002. In that time they’ve witnessed remarkable shifts in attitude and awareness as personal testimony and scientific proof yield answers Chinese medicine practitioners have known for centuries: acupuncture can work wonders for people; or, rather, acupuncture can help get the wonder of the human body back in working order.

“Acupuncture and assisted reproduction, like in vitro fertilization or artificial insemination, come together nicely,” says Stein, “because acupuncture is so relaxing and increases blood flow and thickens the lining of the uterus and decreases contraction after, studies have come out that acupuncture can increase the success of IVF by—depending on the study—anywhere from 30 to 50 percent.” Whereas allopathic practitioners tend to zoom in on a microlevel, focusing on hormones and blood to make amazing medical interventions, acupuncturists are known to take a wider view, to factor issues like physical clues, diet, and temperament into their analysis and holistic treatment.

“A Jewish boy from Jersey? I was supposed to be a doctor,” Stein says with a faux-rebellious glint in his eye when I ask him about acupuncture school. He was on the premed track at Rutgers when he came down with a nagging cold and decided to visit his friend’s brother, an acupuncturist, out of curiosity.

“What struck me was how in-depth it was. He wasn’t just asking me about my initial complaint. We were talking about everything: the way emotions manifest physically, lifestyle choices, diet, stress, digestion, sleep, energy. You might have a lot of symptoms, but a lot of times they’re tied together by one imbalance.” The treatment worked for him. He went back again and again. “It’s cumulative, the way it builds in. I remember feeling like a different person.”

After college, Stein attended the Northwest Institute of Acupuncture and Oriental Medicine in Seattle, Washington, in part for its commitment to public health models that brought acupuncture to people who wouldn’t normally be able to access it. There, he became immersed in an entirely different, 5,000-year-old system of knowledge and basis for understanding human health. In Traditional Chinese Medicine, there’s no separation of mind and body. Emotions correspond with different organs: grief sits in the lungs, joy is in the heart, the kidneys hold fear, the liver holds anger. “Not only do we look at organs from the perspective of how they function physically, but also how when your lungs are strong and open, you’re better able to process grief; when your liver is strong and able to move the qi, or life force, then you’ll have anger but you’ll be able to process it and let it go.”

often equated with “life force,” but that nebulous term hardly clears the matter up. For me, Stein does: “I always think of it as the body’s ability to heal itself, like how you don’t have to think about how to heal a cut,” he says. “That inner intelligence isn’t just physical—it’s emotional, and mental, and spiritual, right?” According to the principles of Chinese Medicine, this intelligence or energy flows along meridians through the body. Where it comes to the surface of the skin are acupuncture points, where hair-thin needles are inserted to reinvigorate the flow of qi.

After my interview with Jason Stein, I experienced acupuncture for the first time. Talking excitedly about the treatment, Stein had bumped up against the limitations of description—the way you do when know something so well you know it in your body best of all—and he wanted me to experience it for myself. Lying down, I pictured myself with those rivers running through me, speckled with places that might be pressed to empower me. And I did feel empowered. The acupuncture treatment made me feel superhuman in all my humanness, and simultaneously relaxed me and restored me, just like Stein said it would.

Which brings me back to that elusive concept of qi. The best way to understand it is probably to feel it, coursing around in you. And if someone asks you what it is and the translation trips you up, you might just tell them to see Jason Stein.