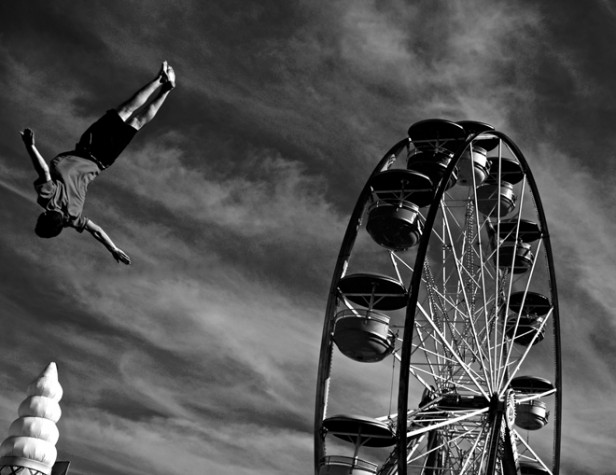 In October 2013, Maine Media Workshops + College announced the winners of its latest competition. A diverse group of jurors, including award-winning authors, artists, and editors, reviewed over a thousand entries to find three pieces: one photograph, one poem, and one video, that were awarded the grand prize. While the selected work has been crafted in very different mediums, each displays a brilliant and unique grasp of storytelling, from Robert Moran’s surreal trapeze to Amy Parrish’s inspiring short film to Miriam Bat-Ami’s evocative verse. Another thing these works have in common? They all speak to the strange and malleable world of the subconscious, the place that spawns our waking dreams and nightly visions.

Dreams of Flying (above)

Robins splash in the driveway’s puddles.

They hop around mounds that moles have made,

fly with their mud-covered feet to places

where branches meet to form a solid seat.

In spring, they nest inside our pines.

Later, they leave summer heat behind

and rest high up in our maples.

When autumn winds blow, I sight their handiwork,

For two straight summers, though, surprisingly,

they constructed a nest in the corner of our back porch trellis.

I had a bird’s eye view of their progress:

the expectant mother, carrying mud in her mouth,

scraping her mud-splattered claws with her beak.

A potter, she shaped her sturdy mud bowl:

deep and round and strong.

Her mate, ever watchful, offered up accessories:

Nights, while the cold spring rains poured down on the trellis,

fearing the worst, I cracked open the blind.

Her wings, flung over the nest, fluttered;

Two months into the first I found myself in a burning building.

Terrified.  Trying to find my child.

I screamed until flames seared my eyeballs.

Then I fled.  Empty-handed.

When I woke, the dream covered me like ash.

I should have stayed in that building.

To dream such a thing felt like a sin.

I spotted and bled out the baby.

Eight months into my first live birth, another night vision

flooded through my walrus body.

I was swimming in an indoor pool.

Legs kicking, I gave birth to a son,

a glorious creature:  half fish, half child.

His tail flashed through the water.

Come to me!  I opened my arms.

We swam laps with each other.

I woke, covered in sweat,

From my bathroom perch, I wondered:

Do birds dream of birth?

Her feathers were thickly wet with rain.

She fanned eggs so beautifully colored

I came to understand why we name a paint after them:

When the babies hatched, the proud parents flew around furiously,

all mouth: large and demanding;

I was transported, traveling a stretch of Missouri highway.

I slammed on the brakes, stopped on the shoulder.

I tore off my shirt and fed him.

I wanted them to stay in their nests.

I wanted to prevent them from fledging out and flying.

One day, with the mother gone, three babies flew away.

I watched the mother return, scan the vacant nest,

then settle on top of her last baby

until that one, too, flew away.

For what is the use of an empty nest?

Through her work at Maine Media Collective, Susan Grisanti has found inspiration in Maine’s creative communities. Susan moved to Maine 14 years ago and has developed a strong passion for Maine contemporary art.

Director & curator of the University of Maine Museum of Art

Before he came to the University of Maine Museum of Art, George Kinghorn served as director with the Museum of Contemporary Art in Jacksonville, FL. He has organized over 100 modern and contemporary art exhibitions.

Elizabeth Opalenik is a fine art photographer whose innovative work is exhibited and collected internationally. Opalenik also teaches photography workshops in the U.S., Europe and Central and South America.

Beth Einhorn is a writer, producer, and director in TV comedy and has written and directed independent films. She worked on The Tonight Show with Jay Leno, The Chris Rock Show, Saturday Night Live, and Jimmy Kimmel Live.

Before co-founding Hyperion, Tom Wilhite was head of motion picture and television production at Walt Disney Studios and a former executive director of Sundance Institute and Sundance Film Festival.

Sharon Creech is the author of the Newbery Medal winner Walk Two Moons, the Newbery Honor book, The Wanderer, and winner of the U.K.’s Carnegie Medal Ruby Holler. She has written thirteen other highly-acclaimed novels and three picture books.

Betsy Sholl is the author of seven books of poetry and served as Poet Laureate of Maine from 2006 to 2011. She teaches at the University of Southern Maine and in the Vermont College of Fine Arts MFA program.

The winners of the Dreams contest will be on display in the Maine Media Gallery at 18 Central Street in Rockport from March 5 through April 12.