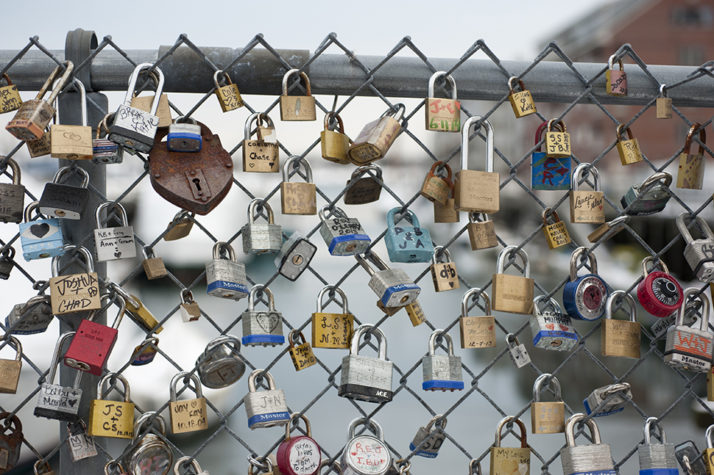 By the people, for the public

Most public art follows the same formula: it is planned, commissioned, and sometimes years later, installed. But sometimes, art happens more spontaneously, appearing to grow organically out of the impulse to beautify public spaces. This was the case with the Love Locks fence on Commercial Street in Portland.

According to local legend, the first padlocks were affixed to the chain-link fence on February 13, 2013 by a couple of friends after a night of drinking. Soon, the project was adopted by the Maine Center for Creativity, and what started as a simple gesture of devotion wound up turning into artistic expression embraced by both the city and its many visitors. “If you go to Paris, you’ll see that there are all kinds of locks that people have placed on bridges over the Seine,” explained Jean Maginnis, founder and executive director at the Maine Center for Creativity. “People from all over the world have traveled to lock their love in Paris, and we love Portland so much we wanted to show it.”

The result is a tribute to Maine and a visual catalogue of individual love stories. Locks are printed with names, decorated with paint, and attached to the fence. Custom dictates that you should throw the key into a nearby body of water, and it seems highly likely that many couples have done just that. And while the Maine Center for Creativity has played a role in promoting the Love Locks fence, Maginnis is quick to point out that it isn’t theirs.

“We call it an art expression rather than an installation. The fence is by the people, for the public.” She adds, “I think Portland is a place that understands the importance of artistic expression, especially when it comes to love.”

Look for the locks of love project near the Portland pier | mainecenterforcreativity.org