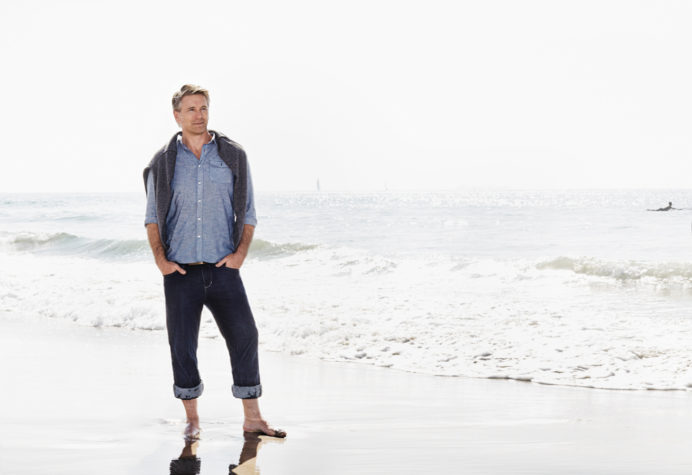 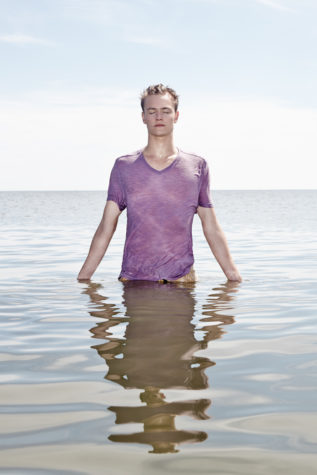 Hippocrates observed that water contributes much towards health. James Mccatherin experiences deep relaxation and centering in the water. 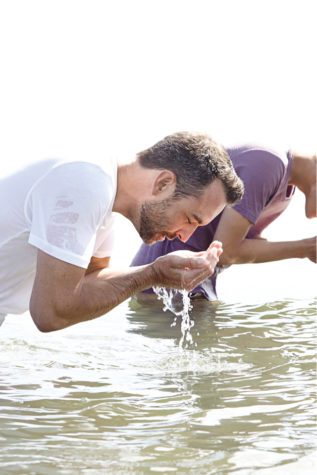 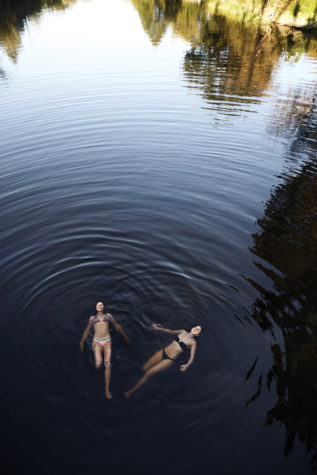 Taylor Skies and Tara Cavanaugh go with the flow in Yarmouth's Royal River. 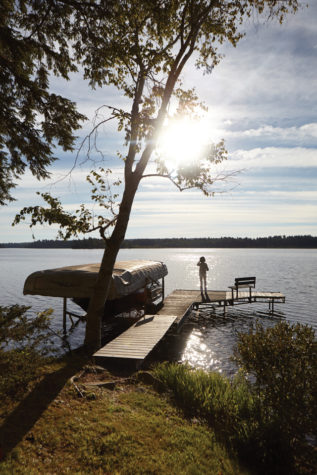 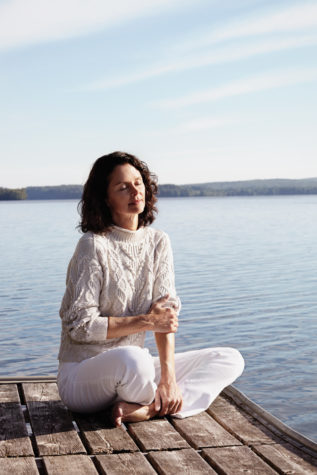 Debra Cooke enjoys the healing powers of Great Pond, the largest of Maine's Belgrade Lakes, where her family has had a presence for several generations. 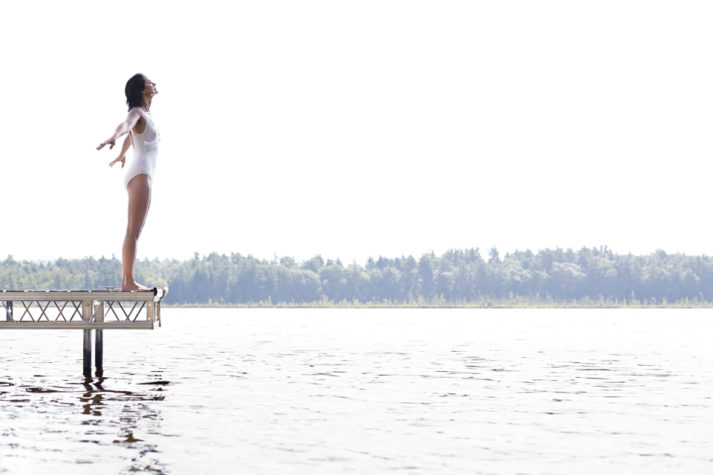 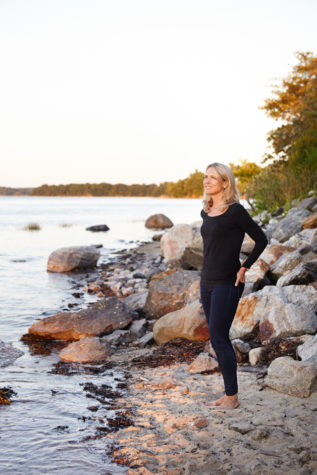 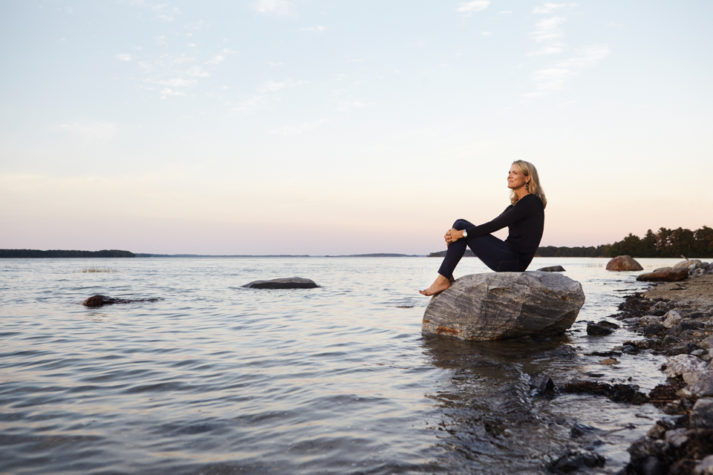 The sky is an unbroken swath of blue and the shores of Little Sebago seem distant as I float farther away from the family compound. I dangle my legs off the edge of the raft into the bathwater-warm lake, pretending I am a mermaid, sunning herself upon a rock. I am 12, and this August day stretches infinitely before me as I experience the benefits of what Dr. Wallace J. Nichols has recently described as blue mind.

In 2011, marine biologist and thought- leader Nichols convened a group of fellow scientists, artists, environmentalists, and others at the first annual Blue Mind Summit in San Francisco. Last year, he solidified his ideas in a New York Times best-selling science book of the same name. His goal? To investigate and communicate the positive impact of water and nature upon the body, mind, and soul—and to further the notion that protecting our waters is imperative to the future of all living creatures.

Nichols defines blue mind as a “mildly meditative state characterized by calm, peacefulness, unity, and a sense of general happiness and satisfaction with life in the moment.” The blue mind, which is enhanced by our proximity to water, is distinctly different from what he calls the hyper-alert and often-anxious red mind, or the depressive gray mind.

“We are beginning to learn that our brains are hardwired to react positively to water,” says Céline Cousteau in her foreword to Nichols’s Blue Mind: The Surprising Science That Shows How Being Near, In, On, or Under Water Can Make You Happier, Healthier, More Connected, and Better at What You Do. Cousteau, granddaughter of renowned ocean explorer Jacques Cousteau, suggests that being near water “can calm and connect us, increase innovation and insight, and even heal what’s broken.”

Two-time cancer survivor Patty Ann Jordan believes in water’s healing powers. She has lived with the aftereffects of her disease and its treatments since 1987. Last summer a friend invited Jordan to her camp on Great Pond in Belgrade. She spent the time swimming, kayaking, and sitting on the dock. “I don’t know what it is about the water,” says 67-year-old Jordan, who suffers from chronic pain and nerve damage caused by chemotherapy. “But I felt so good. It was the healthiest I’ve been since my last major bout with illness 12 years ago.”

There have been numerous studies about the health benefits of water and nature. In Blue Mind, Nichols describes a 2009 University of Southern Maine study, done in conjunction with the University of Utah and the Salt Lake City Veterans Affairs, on a group of military veterans participating in the Rivers of Recovery (ROR) Program. ROR takes veterans on four-day river- based wilderness trips around the country, teaching them fishing skills and relaxation techniques. The study found that one month after a trip, participants had significant improvements on every measure of stress (including positive mood, sleep, and feelings of serenity), as compared to their pre-trip measurements.

We cannot help but be soothed by water. It is integral to our being. “You didn’t come into this world,” says philosopher Alan Watts, “You came out of it, like a wave from the ocean.” When we are born, 78 percent of our body is water—our brain is 80 percent. “The human body as a whole is almost the same density as water, which allows us to float,” says Nichols. “In its mineral composition, the water in our cells is comparable to that found in the sea.”

As humans, we are drawn to the substance from which we emerged, and of which we are comprised. According to Nichols, it is estimated that 80 percent of the earth’s population lives within 60 miles of an ocean, lake, or river. In Maine, water is an abundant natural resource: residents and visitors have access to 3,478 miles of tidal shoreline (more than the state of California) and 3,400 lakes.

Beyond the obvious need to remain hydrated, there are many benefits to being near a water source. In Blue Mind, Nichols references a study of Australians in New South Wales, which found that those who lived in a postal code on the coast were 27 percent more likely than the rest of the population “to report activity levels adequate for healthy adults” and 38 percent more likely to engage in vigorous activity. Citing examples like fitness swimming, diving, and kayaking, Nichols notes that “around the world, more than 500 million people choose water-based recreation as means of exercise, escape, challenge, relaxation, excitement, and play.”

Nichols became fascinated with water through two decades spent studying sea turtles. “I realized that we can work really hard as scientists, creating a mountain of biological knowledge, and have great data on their decline and disappearance, but at the end of the day the sea turtles would be extinct,” says Nichols. “As a kid, I didn’t want to become a marine biologist so I could study extinction. I wanted to solve problems.”

Part of solving problems is appreciating what others bring to the table. “Science and research are just one piece of the puzzle,” says Nichols. “Sometimes you have enough science to go on, and then there is everything else.”

Nichols saw that when other people were given the chance to speak and be heard, “this led to very different meetings, rather than scientists simply talking to themselves.” Often the conversations revolved around people’s particular motivations. “We asked, ‘Why would you like to live in a world where sea turtles were not extinct?’ and, ‘Where did you first fall in love with nature or water?” explains Nichols. “We asked questions; talked about answers; shared stories. It was a different way of thinking about the whole effort.”

As he advocated for environmental changes that would improve the lot of sea turtles, Nichols saw that an affinity for water remained an important underlying theme. Surfers were using it as a means of soothing kids with autism. Environmentalists were investigating the Great Pacific Garbage Patch—a large pile of floating trash that threatens marine life. Musicians resonated with the rhythmic crashing of waves. Artists, like his sister, Jill Hoy, were inspired by it, as she created plein-air paintings in her coastal Stonington home. Nichols realized that he could capitalize on people’s experiences with water and use it to initiate a larger conversation about conservation and well-being.

Nichols had his own deeply personal connections to water. Adopted as an infant, Nichols had maintained strong ties with his family of origin, and observed that all of his siblings were strongly drawn to water, “creatively, artistically, and physically—on it and under it.” A lifelong surfer and scuba diver, he was raised by loving adoptive parents who were “more comfortable on the golf course.” In contrast, Nichols says, “The most time I’ve ever spent on a golf course was in a water hazard diving for balls.”

Nichols eventually convinced his adoptive mom, who had been intensely afraid of the water, to experience the joy he knew could be found there. “It took a lot of work for us to get her in the ocean,” he says. “When she did, she relaxed in a way I’ve never seen—floating on her back with my daughters and me by her side.” Realizing what she had been missing, she took up water aerobics near her home in Arizona. “She does it three times a week and loves it,” says Nichols. “I feel lucky to have had that initial experience with her.”

Nichols also feels fortunate to have had the chance to celebrate his biological father’s final return to the Maine waters he loved. In August 2013, Nichols joined his siblings in a memorial service for Jack Hoy at Cape Rosier. Jack’s children and grandchildren plunged into the icy Atlantic at sunset to celebrate the man who had spent much of his life swimming, sailing, and fishing. “Swimming together,” says Nichols, “was perhaps the best tribute we could offer Jack.”

Nichols concedes that his choice of career may have been influenced by his early life in ways that only in retrospect seem obvious. “I’m adopted and wonder about my origins. I don’t live in pain—I say that openly and honestly. But a mother sea turtle lays her eggs on the beach and leaves before they hatch. Maybe I’m relating symbolically in some way, and that’s why I’m trying to step in and help out.”

Nichols will continue to champion the plight of the sea turtle—and of all creatures whose physical and emotional survival depends upon water. In 2015, he will again celebrate the importance of the blue mind with psychologists and poets, neurologists and nature lovers at the fifth Blue Mind Summit in Washington, D.C. He implores all who will listen to “Walk along the water. Move across its surface. Get under it. Sit in it. Leap into it. Listen to it…let it heal you and make a better, stronger version of yourself.”

Whether we have surfed Higgins Beach, canoed the St. John River, or imagined ourselves to be a mermaid in Little Sebago, Mainers understand that our connection with water transcends the physical. “From a unique and invisible source, beginning in the moisture of the earth and rocks, are born little rivulets that become in every sense the great rivers,” says Taoist philosopher Chuang Tzu. “There in the miniscule, is the full power of knowing how to be.”