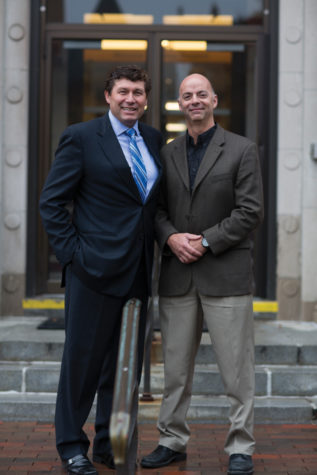 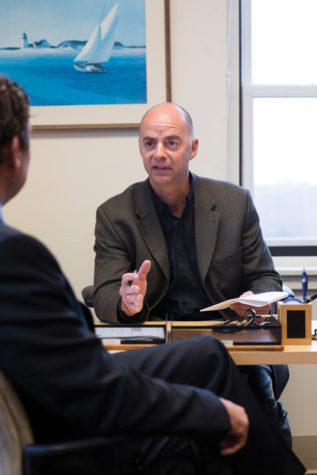 Dr. Craig Brett takes a preventive approach to heart health as the head of Mercy Hospital's cardiology practice in Portland. 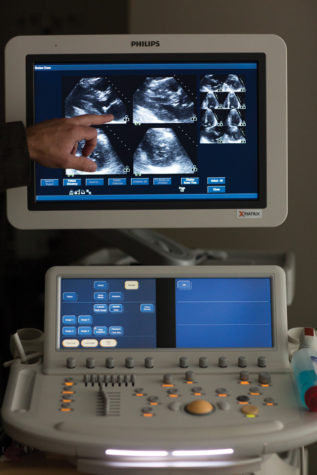 Modern technology gives physicians a window into the workings of the heart through tests such as the echocardiogram. 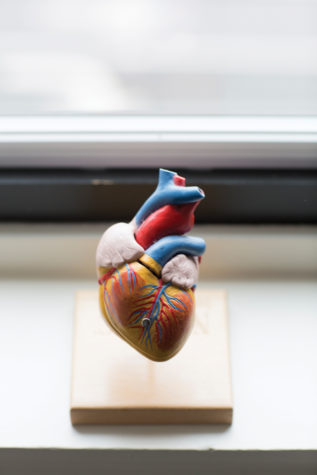 Comprised of flesh and blood, the heart is considered to be the resting place of the shen or spirit in traditional Chinese medicine. 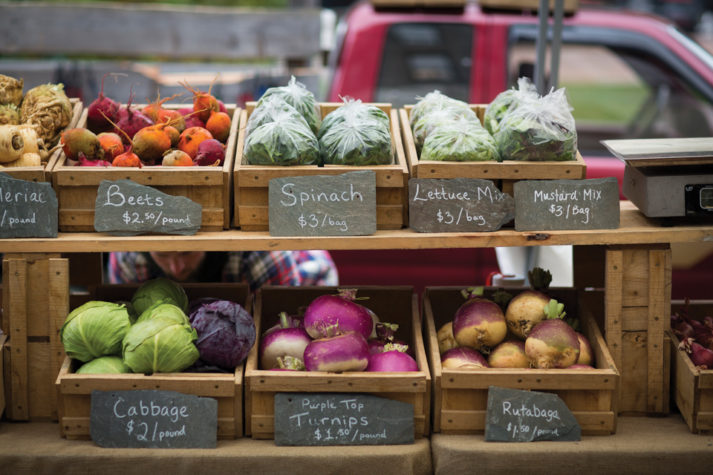 Farm-fresh produce plays an important part in nourishing the body and soul. 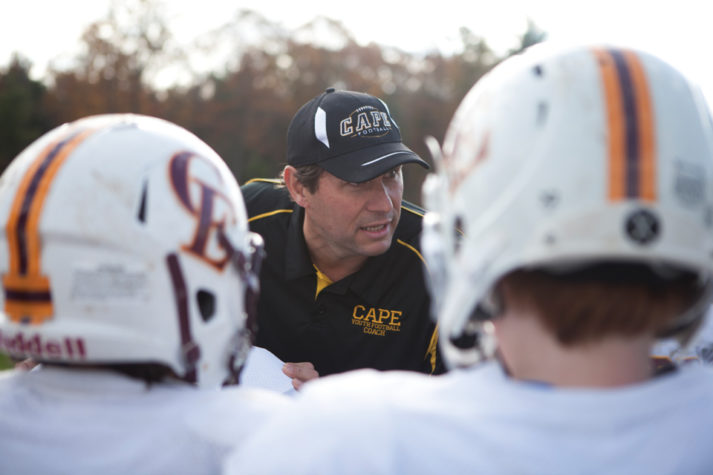 Phil Laughlin at the final game of the Cape Elizabeth youth football season; his cardiologist's son was on his team.

Why Stress Matter with Phil Laughlin and Dr. Craig Brett

Phil Laughlin is lucky to be alive. On the morning of October 16, 2013, Laughlin was jogging with his friend, Phil O’Hearn, near his home in Cape Elizabeth when his heart gave out. “I had no symptoms. I entered Cross Hill Road and I fell down, face first. I have no memory after that, until I woke up five days later.”

Laughlin did not have a history of heart disease. A former all-American football player at Springfield College and semi-pro football player in Italy, Laughlin maintained an active lifestyle. He ate a well-balanced diet, lifted weights, and ran regularly—he had been a frequent participant in his town’s Beach to Beacon road race. He did not smoke or drink to excess.

There were some warning signs, however. “I hadn’t been feeling well,” says Laughlin. “For the past few months, while I would still be able to run five miles, I would often have to stop after the first two to catch my breath.” He had been in his doctor’s office three weeks prior, where his blood pressure was noted to be slightly high. A busy mortgage broker, youth football coach, and father of two, Laughlin chalked it up to stress, but agreed to return to the office for a follow-up.

Laughlin never made it back for the appointment. Instead, a blockage in his heart stopped his body cold. “My friend ran to a neighbor’s house, and they dialed 911,” says 52-year-old Laughlin, recalling the autumn day on which this occurred. “When he got back, I had turned blue and wasn’t breathing. Another neighbor, Dr. Jeff Doss, was on his way to work, and he got out of his car and gave me CPR.” Cape Elizabeth police used an automated external defibrillator (AED) to administer the first of several electric shocks that would be required to restart his heart.

Dr. Craig Brett is a friend of Laughlin’s. Now the director of cardiology at Mercy Hospital, Brett graduated from the University of Vermont College of Medicine in 1989; I graduated in 1996. Both of us learned about Type A personalities: hard-driving individuals whose workaholic tendencies put them at increased risk for heart disease. Type A individuals were thought to process stress less effectively than most, resulting in the activation of their autonomic nervous systems and the circulation of adrenaline- like substances in the blood.

It turns out that Type A personalities are not the only ones for whom stress is an issue. Stress, both chronic and acute, affects us all. “When the system is chronically activated, it causes trouble,” says Brett. “Then you get hypertension.” Also known as the fight-or-flight response, this situation can cause inflammation in the body, which may increase cholesterol levels, and lead to the type of atherosclerotic disease that Laughlin experienced.

Intense, sudden stressors—caused by trauma, anxiety, or extreme grief—can have more immediate effects. Brett relates two stories of female patients who showed every indication of mild heart attacks—one after being pulled over by the police, another after losing her child at the mall. The official term for this is “stress cardiomyopathy.” It has also been dubbed “broken-heart syndrome.”

“My father had a heart attack in his fifties, so I have a family history of coronary disease myself,” says Brett. “I think that’s my only risk factor, but because of that I’m acutely aware of how stress may serve as a trigger. I make sure that I find time for stress relief.” Brett believes that we should be helping our children understand how to cope with life’s demands from an early age. “We shouldn’t underestimate the amount of stress that kids go through,” says Brett. Brett, 51, has four children in high school and college. “I see them doing their homework and trying to do well in sports. Sometimes the sports that we do recreationally, and as stress relief, become the cause of stress. I try to be aware of that, and suggest that my kids incorporate downtime, or social time, or simply play a game that they like.”

Brett agrees that practicing regular stress management techniques, such as yoga, t’ai chi, meditation, or qigong, can give us something to fall back on during difficult times. When we engage in something like relaxation breathing daily, it becomes part of our routine and will be there for us to use when problems arise. We should also seek to do things that make us happy. In the five-phase theory of traditional Chinese medicine, the heart is associated with the emotion of joy. When we are truly joyful, we are able to appreciate our lives, which contributes to having healthy hearts.

Stress management techniques and joyful activities contribute to something that has been called “dispositional mindfulness.” Dispositional mindfulness is defined as a greater awareness and attention to what one is thinking and feeling in the moment. A recent study out of Brown University found that people who scored higher on the Mindful Attention Awareness Scale were more likely to engage in heart-healthy behaviors, such as physical activity and smoking avoidance.

Brett, who is an avid cyclist, has recently taken up skate skiing on Maine’s frozen rivers. Brett strives to practice what he preaches in all aspects of cardiovascular health. “I think staying in shape is helpful for my patients and for my kids,” says Brett. He also tries to eat a heart-healthy diet. “Although the way I eat is not visible to patients, I think it’s nice for them to be cared for by a doctor who’s physically fit himself.”

Brett has become known for his work in the field of preventive cardiology and, more specifically, lipidology. Lipidology refers to the study of cholesterol and the impact of this fatty substance on the arteries of the heart. Many people meet their cardiologists after something has gone wrong: they have suffered a heart attack, had difficulty with a heart valve, or a dangerous heart rhythm. Brett likes to see patients before problems occur. He helps them avoid damage to their heart and blood vessels by making recommendations about diet and lifestyle. Sometimes medications also come into play.

“When people think of cholesterol abnormalities, they assume that if you eat the right food, get enough exercise, and have a good weight, your cholesterol is going to be good,” says Brett. Unfortunately, that is not always the case. In northern New England, there is a large group of people who, by virtue of their French-Canadian heritage, have high levels of the cholesterol type known as low-density lipoprotein (LDL). “It’s mind-boggling for them that they can’t change that with lifestyle. They’re kind of stuck with taking medication,” says Brett. “And that’s tough for them.”

Individuals with genetic predispositions are not the only ones who qualify for cholesterol-lowering medicine. In November 2013, the American College of Cardiology and the American Heart Association changed their recommendations about lipids. Their new guidelines suggest that many more people would benefit from taking medications known as statins. It has been a source of some controversy among both patients and health care providers. “You can argue both sides of whether the stricter guidelines are a good thing or not,” says Brett.

What is not controversial in heart health is the importance of maintaining a normal blood pressure, heart rate, weight, and blood sugar. Smoking is also taboo. It is well known that hypertension, obesity, and diabetes put a tremendous strain on the heart. Obesity can raise the levels of cholesterol known as triglycerides and lower the levels of high-density lipoproteins (HDL). HDL, which can be improved by exercise, protects the heart. “In people who are overweight, obese, or inactive, there’s no medication that works as well as 30 minutes of aerobic exercise four or five days a week,” says Brett.

Dietary modifications are also necessary in people who are overweight. Carbohydrate- restricted diets may be helpful for weight loss, says Brett, but these diets are often higher in animal proteins. An increased intake of red meat can promote other imbalances in the system. “The jury is still out on those,” says Brett. The Mediterranean diet, which focuses on fruits, vegetables, whole grains, and fish, has been validated by medical research as most appropriate for heart health.

Despite scientific advances regarding diet, exercise, stress management, and smoking cessation, heart disease continues to be the leading cause of death in American adults. The statistics in our state are similar to those across the country. “Every day nine Mainers die of heart disease,” says Brett.

Laughlin was not one of those Mainers. Transported to Maine Medical Center in Portland, he was brought back from cardiac arrest and placed in a medically induced coma. Surgeons inserted a stent into his occluded artery. His wife, Christine, waited to see if he would suffer brain damage as a result of oxygen deprivation. Upon awakening, he began telling the nurses how beautiful they were. His family realized then that he was fine.

Laughlin learned from his father that there was more of a family history than he had realized. In addition to his father’s high cholesterol, two uncles had suffered strokes. These were indicators that Laughlin had been at greater risk.

Laughlin has taken full advantage of his new lease on life. He is now on medications for blood pressure and his mildly elevated cholesterol. He eats less fried food and red meat. “I’ve probably had one hamburger in the past year,” he says. After a stint in a cardiac rehabilitation program, where his heart was carefully monitored while he was exercising, he resumed jogging with friends. Last summer he ran the Peaks Island Road Race, in the community in which he was raised.

He also tries to approach his challenges differently. “Stress is always with you. It’s part of life,” he says. “When you have a heart attack, you realize that you aren’t superhuman, and you can’t be everything for everyone. It’s not all about work, bills, and money.”

A year later, Laughlin reflects on his good fortune. “There’s probably only one or two percent of people who go through this that survive,” he says. “It’s only because of the quick action of my friends, neighbors, and Cape Elizabeth police that this was possible.”

“I’m not the type of person who would slow down and think about this,” he continues. “But there must be other things God wants me to do: coach football, spend time with my wife and family, watch my kids grow up.” Laughlin manifests the joy of a healthy heart. “I’m grateful and happy to have these extra days.”