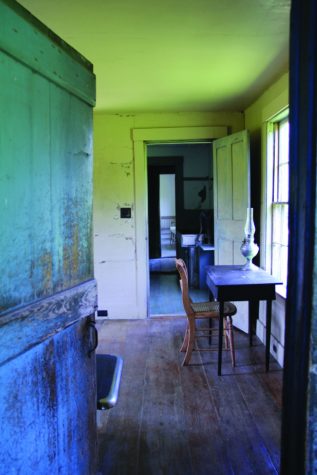 The farmhouse and family that inspired Andrew Wyeth

It wasn’t just the idyllic farmhouse on the coast that drew Andrew Wyeth to the Olson House in Cushing each summer from 1939 to 1968. Wyeth was pulled by the story of Christina and Alvaro Olson, the siblings who lived and worked the saltwater farm, and Christina, who gradually lost the use of her legs (her condition was undiagnosed), but refused to ask for assistance or use a wheelchair.

In the same summer that Wyeth met his future wife, Betsy James, he met the Olsons. James, living nearby, had befriended the family, and she brought Wyeth by one day. Alvaro and Christina welcomed Wyeth and his painting, and he eventually set up his easel inside and around the house. Many of his paintings and sketches depict ordinary chores such as Alvaro painting his dory and farmhouse scenes like hanging pots and brooms caught in the afternoon light leaning against the wall—each illustrating the quiet magic of this period in time when people lived off the land.

In Andrew Wyeth, Christina’s World, and the Olson House, author Michael K. Komanecky tells the story of how one day, Wyeth was inside the Olson House, looking out the window, and he saw Christina crawling uphill, pulling herself towards the home. This was how she got from place to place without a wheelchair. Afterward, Wyeth began sketching, painting, and planning what would become his most recognized work, Christina’s World.

Today the house belongs to the Farnsworth Art Museum and visitors can walk the grounds and along the floorboards of the house where Wyeth spent days observing the once home to Christina and Alvaro Olson.