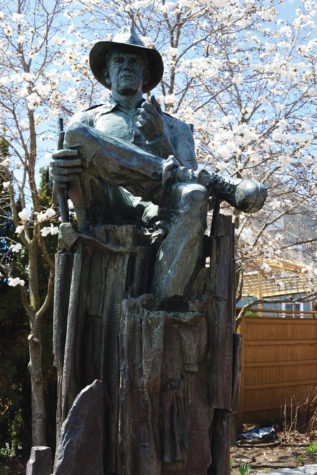 On Gorham’s Corner in Portland is a bronze and granite statue of John Ford sitting cross-legged in a director’s chair. Ford (1894-1973) was a film director who created over 150 films, including Stagecoach, The Searchers, The Man Who Shot Liberty Valance, and The Grapes of Wrath. In his career he was known for Westerns and Irish-American films and he won six Academy Awards.

Stand in front of the Portland statue and look out. That’s where Ford’s father, John A. Feeney, ran a grocery store, but really sold alcohol out the back, explains Michael Connolly, coauthor of John Ford in Focus, along with Kevin Stoehr. Ford’s parents came to Portland from Ireland. “He grew up in Portland, where he came to understand what it felt like to be an ethnic minority,” says Connolly. “I think that really influenced his stories because his films are from the perspective of someone on the outside looking in. His heroes are not clean heroes; they all have flaws.”

The stories of Ford’s life vary mainly because of his tendency to stretch the truth. “He exaggerated quite a bit and enjoyed telling untruths to throw interviewers off,” says Connolly. What we do know is Ford was born in Cape Elizabeth, grew up in the West End and on Munjoy Hill, and his name was John Martin Feeney. He went to Portland High School, where he played football and he acquired the nickname “Bull.” (Later, the owners of Bull Feeney’s would be inspired to use his name for their establishment.)

In 1914, he headed west, following his brother, Francis Ford, who had changed his name, moved to Hollywood, and was working as an actor and director. There John worked on set as an assistant and quickly adopted a love for filmmaking. Like his brother, he changed his name and forged his own path in Hollywood, directing his first film of many, The Tornado, in 1917.

After finding Hollywood fame, Ford would fly back to Portland to visit his family. In Joseph McBride’s Searching for John Ford he is quoted saying to a friend, “I love Portland, but I don’t even know if they like me.” In the 1990s, Linda Noe Laine, whose father was friends with Ford, visited the Old Port and was surprised to find no trace of this famous Hollywood director. Laine donated funds and worked with former mayor Jack Dawson to find a place for the statue, created by New York sculptor George Kelly, in the heart of the former Irish immigrant district.