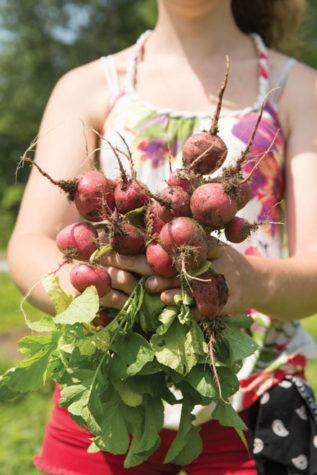 Forty percent of the food used in the St. Josephs cafeteria comes from within 300 miles and much of it comes from the farm, located just across the street. 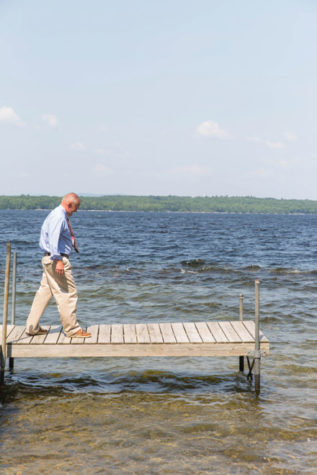 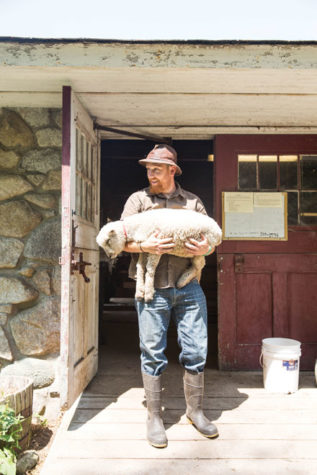 Farm manager Michial Russell seeks to educate college students, faculty, and community members about the tenets of permaculture and sustainability. 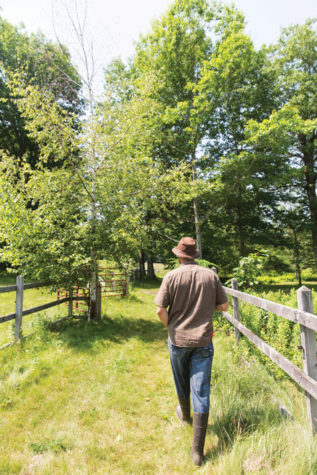 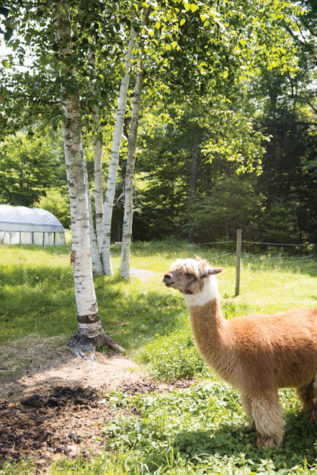 Alpacas, rabbits, chickens, and pigs peacefully coexist on the farm. 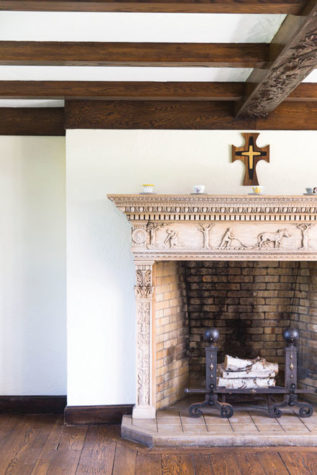 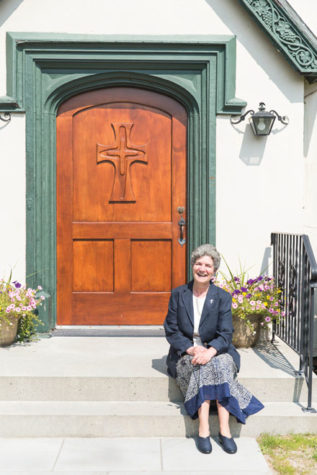 Sister Aronica is a graduate of Saint Josephs and a former Long Island policewoman. 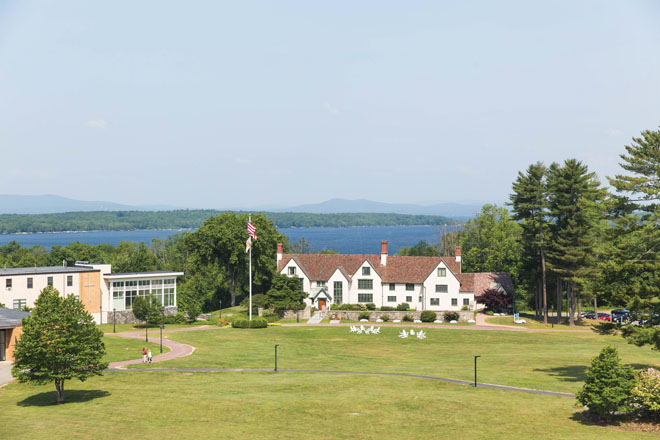 Educating, Farming, and Planning for the Future on the Shores of Sebago Lake

Our shoes sink into the wet grass as we walk behind the one-hundred-year-old stone barn at Pearson’s Town Farm. Farm manager Michial Russell draws my attention to Amal the llama, who is advancing toward our group cautiously from the back field. Making guttural warning sounds, Amal leaves no question that the sheep under his watch are not to be disturbed.

Russell revels in the opportunity to share his passion for the plants and animals of Pearson’s Town Farm, an initiative of Saint Joseph’s College in Standish. “It’s becoming more and more important to bring people out to the farm environment,” says Russell, who was raised in what he calls “agriculturally heavy” central California, and spent 15 years working in an office setting before returning to his roots. “There’s something very spiritual about being able to get out and not just connect with your food, but be outside.”

“Our students have a wonderful relationship with the farm,” says college president Dr. Jim Dlugos. “All students at Saint Joseph’s are required to take an environmental science course. As part of that, they do some time on the farm getting their hands dirty.”

A private Catholic liberal arts school located on the shores of Sebago Lake, Saint Joseph’s College is heading into its second century with both the past and the future in mind. Administrative buildings constructed in the French Normandy style share space with seventies-era concrete block dormitories and the ultramodern Harold Alfond Center sports complex. Adirondack chairs dot the lawns and a large firepit in the center of the campus speaks to the close-knit nature of this school. “Fire is core to human experience,” says Dlugos.

Students are encouraged to take advantage of the natural lakefront setting, which features a view of Mount Washington and the White Mountains in the distance. They can rent kayaks and paddleboards, take a ski bus to nearby resorts in winter, or hike the forested trails. “We want to keepkids busy, but also open their eyes to new opportunities,” says Morgan Rocheleau, director of student activities.

Founded by the Sisters of Mercy in 1912, Saint Joseph’s College was originally located on the grounds of their motherhouse in Portland. It was the first college in that city. Renamed the College of Our Lady of Mercy for seven years beginning in 1949, Saint Joseph’s reclaimed its former title and moved to its present location on Whites Bridge Road in 1956. The property was once the vacation estate of the Verrills, a family known for establishing one of Portland’s largest law firms, Verrill Dana.

Initially created as a school for women, Saint Joseph’s (affectionately called Saint Joe’s) became co-ed in 1970 and began offering distance-based education for working adults in 1976. Once known primarily for its business, education, and nursing programs, the college now offers 40 majors, in areas such as sports management and radiologic science administration. The school has 1,000 undergraduates. An additional 2,400 students take advantage of graduate and certificate courses online.

Saint Joseph’s emphasizes the importance of making connections with others while on campus and with having practical life experiences that may lead to future employment. Students are given business cards with their names on them when they arrive as freshmen and are encouraged to use these for networking purposes. They also participate in the Connections program, which gives them access to career development workshops. By their junior year, they are each eligible for a $2,000 stipend, which is used for learning experiences such as internships, study abroad, and research.

The school’s original mission, as identified by the nuns of the Sisters of Mercy who built Saint Joseph’s College, remains important. An Irish Catholic layperson named Catherine McAuley founded the Sisters of Mercy in Dublin in 1831. Her focus was on the education of young women. The Sisters of Mercy,now in locations worldwide, continue to emphasize education and hospitality. They hold spirituality, community, service, and social justice as their core values. There are currently six nuns living on the Saint Joseph’s campus, several of whom are active in teaching and administration.

“Intellectual and spiritual development are happening at the same time while students are at Saint Joe’s,” says Sister Michele Aronica. Aronica, an alumna of Saint Joseph’s, worked as a policewoman on Long Island before completing her education in sociology. In 1970 she came to Saint Joe’s to be part of the first coeducational class at the college. She is now the head of the sociology department and advises many students on both academic and life skills. “Over the long haul students are graduating not just from college but from a community,” says Aronica.

More than 35 percent of Saint Joseph’s undergraduates are varsity athletes, excelling in sports such as basketball and baseball. Team players are known as the Monks. With the need for future athletic fields in mind, the school bought the property across Whites Bridge Road from their main campus in 2000. Then, Dlugos explains, fate intervened in the form of a difficult economy. “The property was sitting idle and some folks on campus said, ‘We like to garden. Can we go over there and plant some tomatoes?,’” recalls Dlugos. “The college staff said ‘don’t hurt yourselves and don’t get too settled.’”

In the summer of 2005, the on-campus dining service general manager, Stuart Leckie, and Saint Joseph’s graduate Matthew Olson began a small garden project at the Whites Bridge property. By 2009, a full-time farm manager had been hired and the garden was supplying produce to students at meals. “From there, the farm just grew organically,” says Dlugos. “We have to be thankful for the little accidents of history.” Pearson’s Town Farm is now licensed to sell everything it produces, including vegetables, sheep, goats, alpacas, and chickens. It also provides food to Catherine’s Cupboard Food Pantry, which operates out of the Standish Town Hall.

The farm, which is in the process of expanding its fields from one to five acres, operates on the principles of permaculture. Permaculture attempts to draw from what is available in the local ecosystem. “Agriculture is so intensely dependent on foreign inputs,” says Russell. “Fertilizers, pesticides, herbicides, feed, seeds—these things most farms have to ship in, so there’s a carbon footprint. When we look at nature, by and large it’s in balance. If something goes a little out of whack, it corrects itself very quickly.” Pearson’s Town Farm has an active composting system, returning nutrients to the soil through the recycling of food scraps and discarded plant matter. “It’s great to see the energy of the college getting behind something that other colleges might shy away from,” says Russell.

The school is particularly proud of its “farm-to-fork” model. What it can’t grow at Pearson’s Town Farm, it sources from carefully chosen local vendors. “Forty-four percent of our food comes from within 300 miles,” says Dlugos. During a recent visit to the campus, the menu featured Peppermint Fields Beef from Fryeburg, bread from Botto’s Bakery in Portland, and tomatoes from Backyard Farms in Madison. That day’s pan-seared blackened haddock with tarragon honey mustard glaze contained fish from the Gulf of Maine; the college works with the Gulf of Maine Research Institute to support responsibly harvested fishing practices.

The principles of permaculture, and the importance of the regional ecosystem, have made their way into a larger discussion about the future of Saint Joseph’s. “The challenges in education are the same everywhere,” says Dlugos. “But the solutions are local.” Dlugos believes that utilizing what the college already has access to—474 acres of farms and forest, 2,100 feet of Sebago Lake shorefront, and a strong student and alumni base with high-level educational programs—is the key to its future. “The traditional business model for higher education, which has been ‘one size fits all,’ has probably never really worked for smaller colleges,” says Dlugos. “As we continue to grow our endowment we are also focusing on the development of mission-aligned businesses based on available resources.”

In collaboration with the Knickerbocker Group, Saint Joseph’s has created plans for what they are calling the Westerlea complex: a lakeside four-season lodge, cottages, and residential housing for those 55 and older and a multi-age learning center. The college also plans to convert the Pearson’s Town Farm stone barn into a wedding and event venue. Each of these “mission-aligned businesses” will provide students with experience in areas such as hospitality, sustainability, agriculture, and business.

“These businesses will generate revenue, but will also provide students with the chance to get hands-on, experiential learning and opportunities to actually earn real money, which is part of the challenge these days for many students,” says Dlugos.

“The cross-cutting themes in our strategic plan are wellness and sustainability,” Dlugos continues. “Wellness is the human name for sustainability. When we talk about that, we don’t just mean recycling and we don’t just mean buying produce locally, although these are important. If we care about philosophy, if we care about the classics, if we care about the liberal arts tradition, what are we doing today to ensure that they will be here 50 or 100 years from now? I say on a regular basis the work I do is not so much focused on now, but on what will happen when I’m long gone.”

Saint Joseph’s continues to invest in the future, through programs such as Pearson’s Town Farm and the Westerlea project, with the mission of the Sisters of Mercy firmly in mind. For Russell, the importance of community can’t be overemphasized and reflects the connectivity principles of permaculture that he holds dear. “Farming is important and sustainability is important, but community building is the most important,” says Russell. “If we don’t have each other to rely on, then we really haven’t anything.”