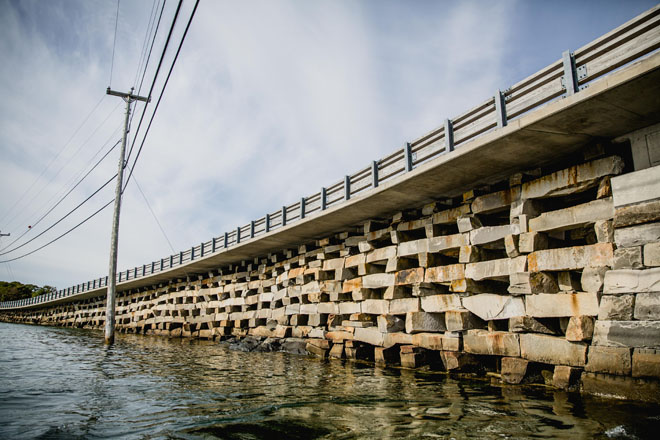 As you wind your way through Harpswell, passing homes tucked behind trees, and getting glimpses of the coves that surround this ribbon of land in Casco Bay, you finally arrive at the iconic and narrow Bailey Island Bridge that connects Bailey to the mainland. The cribstone bridge is the only of its kind in the world. Like the lattice of a rollercoaster, the bridge rests on top of crisscrossed granite blocks with large openings, which allow the strong tides to pass through.

Simple in its formation, the 1,150-foot bridge that spans the cold waterway known as Will’s Gut is a local landmark. The bridge was built in 1927 and finished a year later, after years of the Bailey Island residents wanting a bridge that connected to Orr’s Island. Although it was then met with opposition from the mainland residents, the structure has made the beauty of Bailey Island, including Giant’s Stairs Trail, Mackerel Cove, and Land’s End, accessible to visitors for more than 80 years.