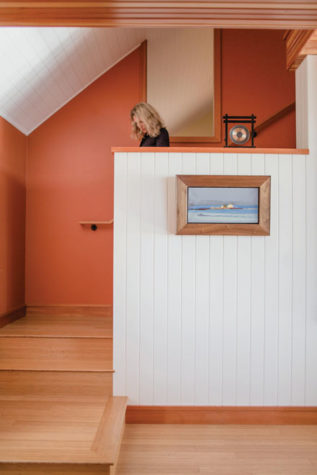 The walls ofour home are filled with treasures from artists we know and admire. This piece by William B. Hoyt is one of our favorites 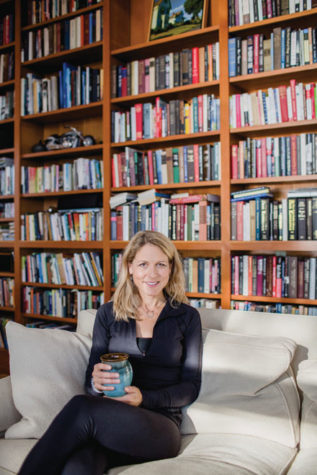 Lessons of the pastyear: love fiercely, live passionately, and do more of the things that bring you joy. 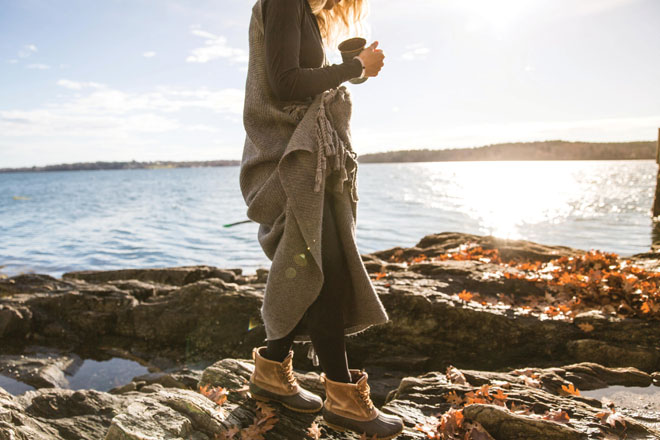 Growing up in Yarmouth, nearby Littlejohn Island seemed like another land. We moved here last year, just months before getting the cancer diagnosis, and it has become a place of solace and healing. 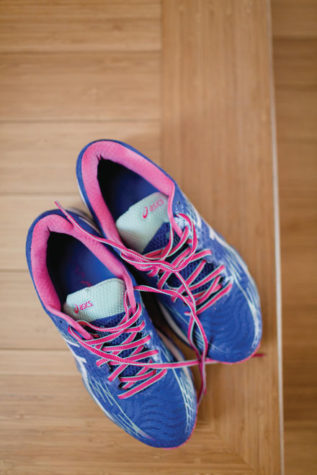 My morning routine includes tea, reading, meditation, and a run with the man I love. 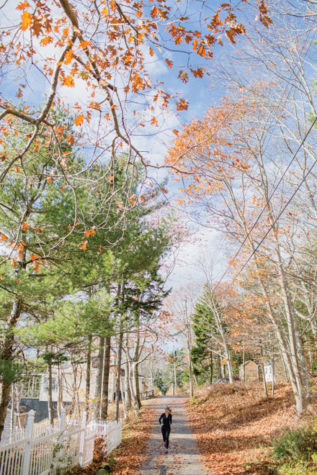 I began running when I was in second grade, and Ive never looked back. The loop on Littlejohn Island provides us with both exercise and inspiration. 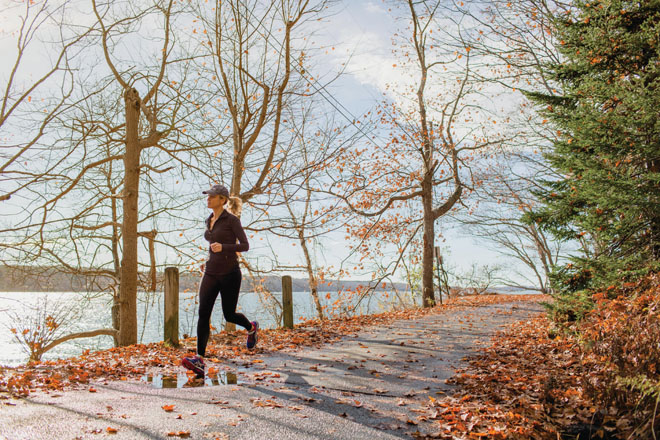 From Doctor to Patient

It has been a year since I sat in an Old Port restaurant, surrounded by my sisters and mother, and told my three kids I had breast cancer.

It had been my intention to break the news to my children with family nearby, so that no matter the outcome of my illness, they would not feel alone.

There is no easy way to tell your children you have cancer. The way I chose was no better than any other. There was shock and there were tears. My mother, using words we mothers often use, said, “It’s going to be OK.” My sisters reached across the table and touched my children in sympathy. My sister-in-law, a relative newcomer to the family, sat quietly, trying not to intrude upon our pain.

Despite the dire potentialities of the cancer cells that bloomed across my chest, I was more concerned about the damage I would do to my children than that which would later be wrought by a surgeon’s blade. I feared the disintegration of my children’s innocence more than the loss of my own body parts. Although my children were growing up—21, 18, and 13—they still relied upon me for stability and care. It had been more than a decade since I had nourished any of them with my now-diseased breasts, but I still fiercely loved and felt responsibility for these humans who had once shared space within my body.

It seems ironic that cell growth can be so joyfully productive—as in the case of an infant, gestating within a womb—and so destructive. With my diagnosis, I had the dubious honor of experiencing both. I had unwittingly and unwillingly joined “cancer nation”—a fellowship whose price of entry is the life-threatening proliferation of abnormal cells within normal tissue.

According to the Maine Cancer Foundation, one in four individuals in Maine will receive a cancer diagnosis in his or her lifetime. Maine’s numbers are the highest in New England, and significantly higher than the national average. Why does cancer have such a grip on our state? The possibilities are myriad—and only a few of these have been concretely identified. We know that tobacco use, dietary choices, and activity level each has an impact on cancer cells. Twenty-one percent of Mainers still smoke and 28.2 percent are obese. Cancer is also more prevalent in older people, with a median age of 66 years at diagnosis. Maine has the highest median age in the United States at 43.5.

Then there are the intangibles: potentially damaging substances in the food we eat, the water we drink, and the air we breathe. For all of its wild beauty, Maine does have an industrial past. Rivers were once polluted with the runoff from factories and particulate matter from paper mills sifted through the air.

Ultimately, some combination of our personal genetics and lifestyle choices interacts with our environmental exposure, causing cancer cells to thrive within vulnerable individuals. If we are lucky, we have the type of cancer that can be detected early. Mine was. Although mammograms are an imperfect screening test, rife with false positives, and less useful in dense breasts, they are, as many doctors will tell you, the best test we currently have.

In my early 40s, with no family history and no risk factors for breast cancer, I submitted to my first mammogram reluctantly. The U.S. Preventive Services Task Force recommends that women begin getting mammograms at age 50, and I had been inclined to follow their guidelines. When my gynecologist, Dr. Caroline Hodsdon, felt a cystic mass in my left breast (a mass that I had also detected), she wanted confirmation that it was benign and ordered an ultrasound. With the ultrasound, the radiologist suggested a screening mammogram for the opposite breast. Initially, I balked. Then I agreed.

The radiology technician seemed concerned by what she was seeing in the tissue close to my chest wall. Wanting to get a better view, she tugged and pulled at the flesh of my small breast, crushing it between the cold metal plates before asking me to hold my breath while the camera recorded its images.

I asked to see what the camera had delivered. The technician allowed me to look at the computer screen: a constellation of micro-calcifications lit up the gray night sky of my mammogram. The radiologist was unable to tell me with certainty what hid within these shadows.

Two weeks, and two painful biopsies, later, I got the phone call that no woman (or man) ever wants to receive. “You have ductal carcinoma in situ,” said Dr. Hodsdon.

Thus it was that my first mammogram led to my cancer diagnosis—a diagnosis that my medical training had not prepared me to receive. Since graduating from the University of Vermont College of Medicine in 1996, I have broken cancer news to multiple patients and their loved ones. None of my prior experiences helped me to be a cancer patient myself. “What does this mean?” I asked Dr. Hodsdon.

“It is a localized malignancy at an early stage,” replied Dr. Hodsdon. “We’ll get you in to see the breast specialist right away to discuss your options.”

With the help of Dr. Suzanne Hoekstra, a surgeon with Mercy Hospital’s Breast Care Specialists of Maine, I made the decision to treat the cancer aggressively, and scheduled a bilateral mastectomy. Other options, which might have spared my breasts, would have necessitated returning for either a mammogram or an MRI every six months—indefinitely. The psychological ramifications of waiting for the cancer to possibly re-emerge were more than I could bear.

Dr. Hoekstra supported my decision. She also recommended that I get genetic testing and start the breast reconstruction process immediately. Dr. Therese White, a surgeon with Plastic and Hand Surgical Associates, agreed to perform the reconstruction.

Things got very real, very quickly. The first surgery took place on January 20, 2015. My family filled the waiting room, fielding texts from other family members and friends who could not be there. Several hours later, the surgeons informed my cheering squad that the cancer was gone. My mother wept tears of relief as she leaned in to hug me before returning home: she had not wanted to tell me how worried she had been upon learning that I, the oldest of her ten children, had cancer. She had not been entirely convinced that it was “going to be OK,” after all.

After the procedure, I felt as if someone had nailed a board to my chest, across the ribs where my breasts had existed since puberty. I could not breathe deeply without pain. Two blood-filled drainage tubes snaked out from the bandages over the space where the skin-stretching expanders would make room for new implants. It was the day after my birthday, and I had fully metamorphosed from doctor to patient, a bloodied but unbeaten member of the cancer nation.

Eager to move the recovery process along, I moved back into the world as quickly as my doctors would allow. I began walking around our small island, braving the winter weather as I looked forward to running again. The week after surgery, I recommenced my writing tasks—journaling and completing assignments for Maine magazine. Two weeks later, I was recording interviews for Love Maine Radio. By March, with the expanders still attached under the muscles of my chest wall, I had returned to my medical practice in Brunswick.

As a doctor who was still a patient, I wove my own medical appointments in between work duties. Dr. Hoekstra told me that the lymph nodes they had tested under my right arm were clear of cancer cells: the malignancy had not spread. The oncology office informed me that my genetic testing had come up clean—none of my four sisters or two daughters would be more at risk for breast cancer than the average person.

Meanwhile, Dr. White dealt with the tissue expanders. Once the drains had been removed, she began injecting fluid into each plastic sac, making room for the implants that would eventually become my new breasts. With each passing week, the bulbous, alien chest swellings provided evidence that I was metamorphosing yet again: from cancer patient to former cancer patient reconstructed.

In late April, Dr. White removed the overly inflated (and thus somewhat painful) expanders, replacing them with more permanent implants. This surgery, done as an outpatient, was much less invasive. I was able to return to working—and running—within weeks. By May I was gratefully wearing a bikini in Curacao, on vacation with the significant man in my life and all of our six children.

It is interesting to have moved through a year of cancer and come out on the other side. There are only two options with cancer: you die, or you live. Your body succumbs to the abnormal growths that take over the normally dividing cells, or somehow, it doesn’t. Somehow, your healthy cells are able to regain priority. Through scraping the cancer cells out of your body’s cavities, or poisoning them with chemotherapy, or frying them with radiation, you are able to return to a normal pattern of living.

But you will never be the same. You will have fought with a monster who roamed the plains of your body, uninvited. The fact that you once provided this monster with fertile ground means that he could someday return.

Having had the remainder of my breast tissue excised, I’ve decreased this chance to the largest extent possible. Daily I am reminded of my good fortune, when I glance at the horizontal scars running from either side of my chest, like two zippers that don’t quite meet in the middle. I know that my scars bear witness to a peace of mind that others may not have.

They are placeholders that remind me to nourish the growth of things—and people—that I love. As a reluctant member of the cancer nation, I’ve experienced both destruction and rebirth. I’ve metamorphosed from doctor to cancer patient to reconstructed cancer patient. I’ve been transformed, and so has the community around me. My family bears some scars, too. And we share our scars with our reluctant new nation, every member unwilling, but none of us alone.