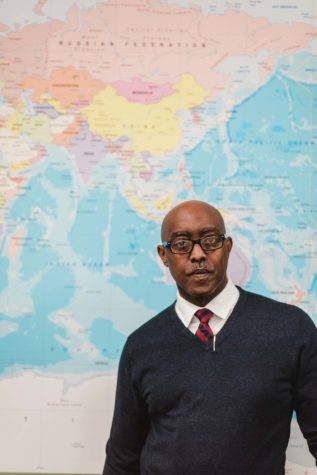 Alain Nahimana, who immigrated to the U.S. from Burundi in 2010, founded the Greater Portland Immigrant Welcome Center to provide immigrants with resources as they adjust to living and working in a new country. 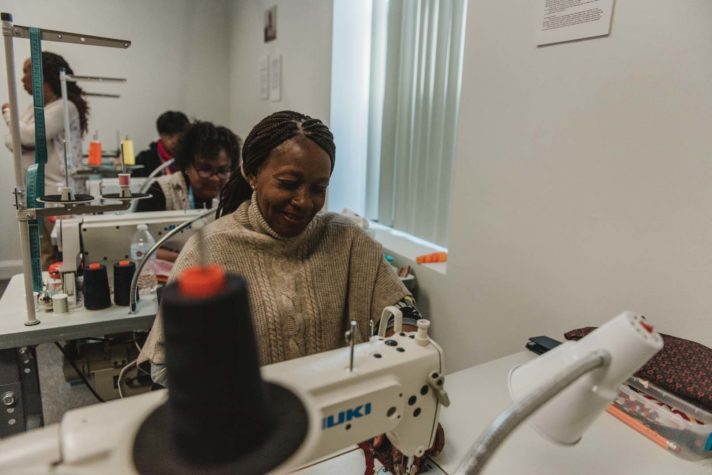 Sarah Esengo works on a sewing project through a program with Women United Around the World, which is one of several immigrant service organizations that rents out space at the Welcome Center. 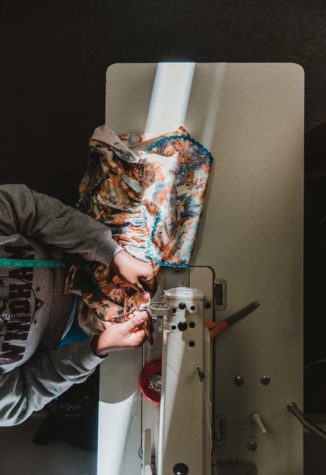 Women United Around the World trains immigrant women in different vocational skills, including sewing, and prepares them for the workforce. 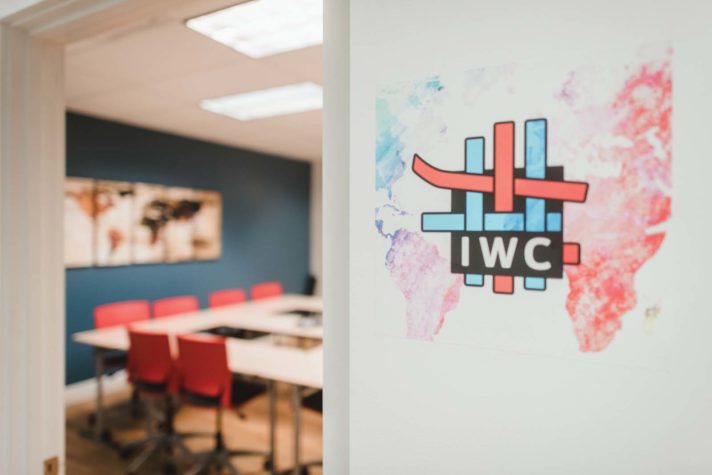 The Welcome Center, located on Preble Street in Portland, underwent a renovation this past fall to expand services, including a new language lab, business hub, and civic engagement program.

At the Greater Portland Immigrant Welcome Center, Alain Nahimana supports new Mainers like himself to help them succeed in their new home

Alain Nahimana’s first job in America was a two-hour-a-week gig cleaning bathrooms at the Oxford Street Shelter in Portland. As he washed floors and scrubbed toilets, he thought of everything he had left behind in Burundi, including the communications firm he had run before he had to flee for his life. He had come to the United States seeking a better life, but in some ways he was worse off, with no idea how to move forward.

Depressed and underpaid, Nahimana knew he could do more than the workfare job he had been assigned as part of his General Assistance benefits. His entrepreneurial background gave him the tools to create a new path for himself. Now, eight years after moving to the U.S., Nahimana, 48, is the executive director of the Greater Portland Immigrant Welcome Center, a nonprofit organization he cofounded to provide resources and community for new Mainers who are in the same position he once was. “I went from survivor mode to, today, being in a living mode,” he says. “It takes a lot. It’s resiliency 24/7.”

Born in Burundi to a father who worked in government and a mother who fought for women’s rights, Nahimana was taught to dream big. “Ever since I was young I was fascinated by entrepreneurs and the idea of the self-made man,” he says. After graduating college with a business degree, he started his first company when he was 23 years old. It was a communications agency that designed websites for businesses and nonprofits. In the years that followed, civil war in Burundi forced Nahimana to flee to Kenya, then Tanzania. In each country he started a new business: an air cargo and travel agency and a communications consultancy, respectively. Then he returned to Burundi after the civil war ended, where he continued to run the first communications agency he had started.

Nahimana joined the National Council for the Defense of Democracy–Forces for the Defense of Democracy, which is now the ruling political party in Burundi. At the time of the civil war, though, it was the biggest rebel group. Nahimana became close with the leader of the party, who was then imprisoned, putting him and the leader’s other allies at risk of capture by Burundi intelligence services. “I had to flee to save my life,” Nahimana says. His sister lived in California, and when he applied for asylum she agreed to host him in the U.S. Although he was grateful for a safe place to live, he says he felt lost and was overwhelmed by how big California is. Two months later he visited a college friend in Maine and decided to stay. “I found that Maine was the right place for me,” he says. “I found that this was the place where I wanted to build my life and take care of my life.”

This wasn’t as easy as Nahimana had hoped. With no resources or understanding of how to apply his business skills in the U.S., he was stuck. The job cleaning bathrooms was making him deeply depressed, and he found himself numbly going through the motions. Things started looking up for him when he found a new workfare job as an office administrator for an organization that worked with refugees. It wasn’t a dream job, but he it gave him a sense of purpose.

After his asylum was granted and his workfare program ended, Nahimana spent the next couple of years moving from one job to the next. He worked at a call center where he was harassed with racist and xenophobic comments, then as a freelance interpreter for hospitals and law offices, and later as a truck driver. After his father died suddenly in 2012, Nahimana realized he didn’t want to spend the rest of his life working in unfulfilling jobs. He applied for a position at the Maine Immigrants’ Rights Coalition and was hired for a three-month probationary period. He was told that, if he could successfully plan a rally in Portland in support of immigration reform with at least a couple hundred people in attendance, he’d be offered a permanent position. At the rally, over 600 people showed up, shattering the organization’s expectations. Nahimana was immediately hired.

The next three years were spent growing with the organization and advocating for immigrants’ rights in Augusta. “That was a very good learning experience,” Nahimana says. “I learned a lot of community engagement skills and learned how to bring people together, which is a skill I use here in my current job.” In addition to giving Nahimana a greater sense of purpose, the job showed him his experience as an immigrant wasn’t unique to him. Many people are struggling to have their basic needs met, and it is hard to transfer their skills to jobs here. Nahimana noticed the people he worked with didn’t even have access to basic things like printers, but they needed to print documents to apply for work or housing. In 2016 he left his job at the coalition to create the Greater Portland Immigrant Welcome Center.

Working with cofounder Damas Rugaba, an immigrant from Rwanda, and receiving money from the Maine Philanthropy Center’s Broad Reach Fund as well as pro bono support from community members and businesses, Nahimana opened the Welcome Center in Portland in July 2017. Initially a coworking space, the center gives immigrants a place to use computers and access other resources they need. Many immigrant-focused organizations without offices also use the space, and two immigrant-run businesses, Manir Print and Design and MaSh Associates, operate at the center. In October 2018 the nonprofit completed a renovation that expanded the center to two floors and added three additional programs, all of which focus on helping immigrants become more fulfilled and engaged with life in the U.S.

Like Nahimana, many immigrants led successful lives back home, whether as business owners or highly skilled workers, but language has been a huge barrier to their success in the U.S. “I know people who spend their whole lives working low-level jobs, despite having skills and degrees, because they can’t speak English,” Nahimana says. To help people advance in their careers and become more involved in their communities, the Welcome Center now offers language acquisition through its English language lab. Another new program focuses on citizenship and civic engagement and helping immigrants learn more about democracy and local, state, and national government. Nahimana says it’s important for immigrants to be involved and have a voice. “We can’t have an inclusive economy without having an inclusive democracy,” he says.

The third new program reflects Nahimana’s entrepreneurial spirit and love of business. Starting this winter, the 12-week Greenhouse Program will help the five inaugural participants develop business plans and launch their own companies. Nahimana and the program’s advisory committee made up of local business owners will provide training, connections with mentors working in similar fields, and assistance with accessing capital. Several businesses in Portland and around Maine, including cPort Credit Union, will be partnering with the program. “Having businesses step in shows that they are proud to have immigrants in the community,” Nahimana says. “It shows that there is a lot of support.”

Support is what immigrants need more than anything else, Nahimana says. Without support—from his board, community partners, and other immigrants—the Welcome Center wouldn’t exist. It’s been humbling for Nahimana to see others get behind his idea and make it a reality. “My passion is sharing a vision and having people share ownership of that vision,” he says. The resources provided by the Greater Portland Immigrant Welcome Center create scaffolding for immigrants to develop their own visions. For Nahimana, that’s how he and other immigrants will find their way forward. 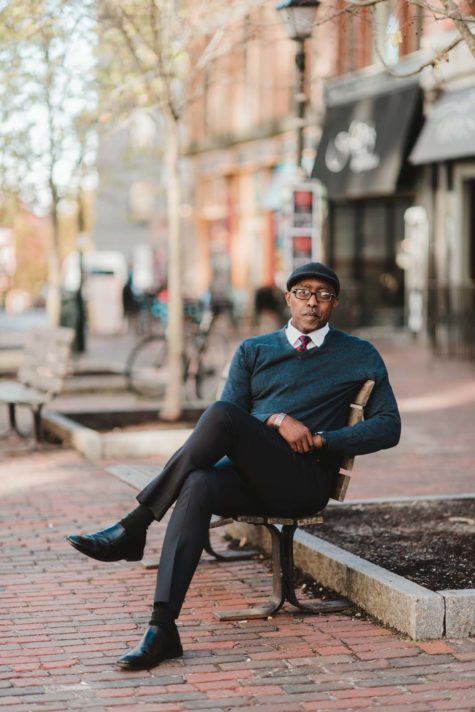 Alain Nahimana founded a business back home in Burundi but found it hard to translate his skills and experience into a job in the United States. The Greater Portland Immigrant Welcome Center helps immigrants start their own businesses or prepare for jobs beyond entry level.