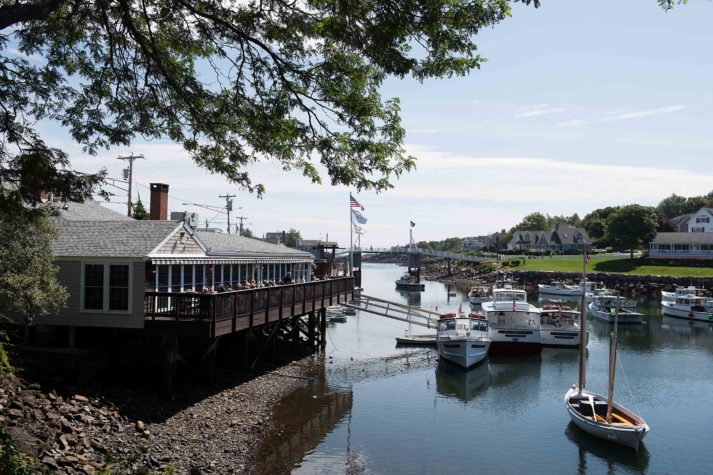 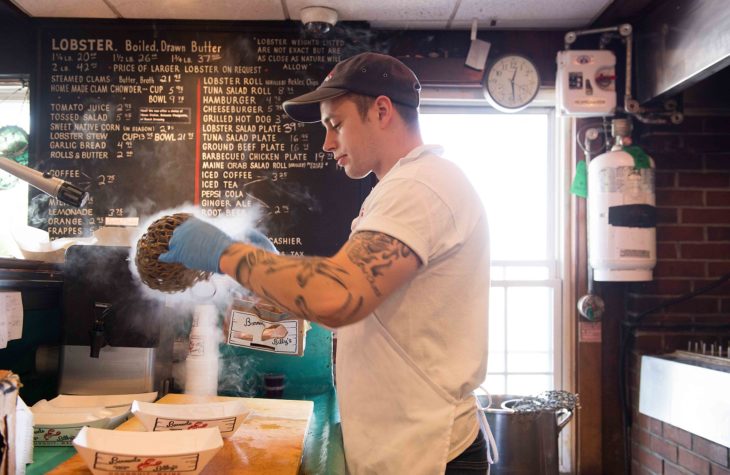 Brandon Moffett, a cook at Barnacle Billy’s, prepares a batch of steamers. 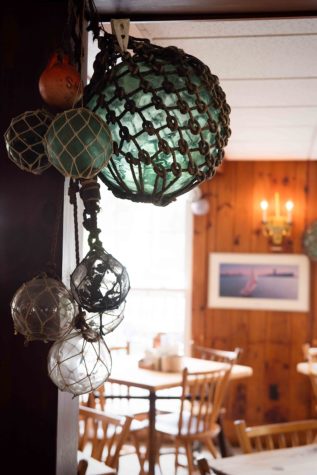 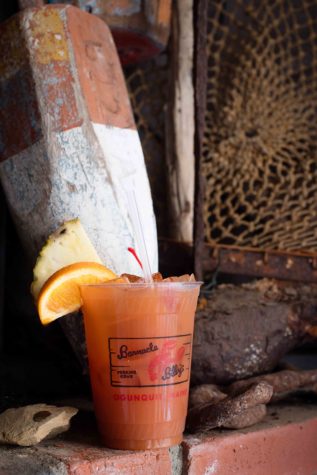 The rum punch at Barnacle Billy’s was inspired by Billy Tower’s trip to Saint Croix.

For half a century, the family behind Barnacle Billy’s has been serving lobster rolls and rum punch to locals, presidents, and everyone in between

William “Tim” Tower is difficult to pin down for an interview. Twice a week he takes guests deep-sea fishing on the Bunny Clark, a 40-foot vessel named for his mother, which leaves Perkins Cove at 4 a.m. On the other days, he could be at his computer writing the daily online ship’s log and guest letter. Or he might be out on his bicycle, training for a long-distance charity ride. But most likely, Tim Tower is tending to guests at his family restaurant, Barnacle Billy’s. He holds doors open, offers fresh drinks, and stops by every table, every day, to say hello. The place is full all summer and early fall, overflowing with visitors, including many from out of state who have heard of this Ogunquit landmark, which has served lobster and more since 1961. Tower is the eldest son of the original Barnacle Billy, a nickname given to William “Billy” Tower, Jr., when he first opened the restaurant.

We finally meet in late August. Tim’s sisters, Meg Tower and Cathy Koppstein, join us at a table in the dining room. While we talk, staff are hustling to get the place ready for what’s likely to be a hectic afternoon. The family story comes out fast, full of colorful detail, with every funny anecdote and fond remembrance circling back to their father, Billy. “The restaurant was a complete success right from the very beginning,” Tim tells me. “It was his baby,” Meg adds. Billy had no restaurant experience, but he knew fish. He worked as a fisherman after serving in the U.S. Coast Guard. He was a helmsman on a tuna boat “because he never wanted to harpoon a fish,” says Tim. In 1961 Leon Perkins sold him a building on Perkins Cove. “He knew exactly what he wanted to do,” says Meg. “The cove was a sleepy little art village then—a dirt road with fishing shacks,” says Tim. “Barnacle Billy’s was one of the only restaurants around. The way it was set up and run, with a different menu—he was building something unique, not just a lobster pound.” “The difference was his kindness,” interjects Meg. “He went to every table to say hello. Now Timmy does it.”

Tim Tower, like all the Tower children (they also have a brother named Courtland, Cathy’s twin), worked at the restaurant starting at a young age. Along with working at the restaurant, Tim fished for tuna, had his own lobster boat, and worked for an on-the-water scenic tour company. At age 18, now manager of the restaurant, he told his father he was leaving Maine to go to college. “I love Ogunquit, and I knew I’d always come back,” Tim says. Courtland took over, and when Tim did come back after college, he chose fishing over the family restaurant. After a few years of fishing, however, Tim realized it wasn’t going to provide enough for his family. “In 1995 my father took me for a ride in the station wagon,” Tim says. “He said, ‘I want you to keep the boat, but I want you to come back to the restaurant.’ We thought quite a bit alike. He liked me being here.”

The Barnacle Billy’s season opens in April and closes in late October. Fans of the restaurant mark their calendars for that first day, and even though winter’s grip has barely let go by then, it feels as celebratory as the first game of the new season at Fen- way Park. The restaurant used to open only for dinner that first day, but each year the line got longer, snaking out the door. Now you can get a lobster roll as early as 11 a.m. In the height of summer, it’s all hands on deck for the family and staff, many of whom have worked here for more than a decade. “We have an 84 percent employee return rate,” says Meg. “There have been several marriages here among the staff, then their kids come back to work here.” For many, Barnacle Billy’s is tradition, and the Tower family is proud of the relationships they’ve formed. “We have a solid customer base built on the relationships my father made,” says Tim. “It’s not just about the food.”

But it certainly helps to have heaping lobster rolls and lobster stew, steamers, and whole lobsters. The lobster roll is simple—light on the mayonnaise, with chips and a pickle on the side. You can round it out with an ear of corn or a side of special garlic bread. Barnacle Billy’s is an order- at-the-counter, paper-plate kind of place, where you can watch as your lobster is chosen from the tank. Most of the lobsters were pulled from the waters off Ogunquit or nearby. While you wait for your food, take a look at the photographs on the walls. There’s Tom Brady sitting next to former presidents Bill Clinton and George H.W. Bush. “We’ve had the whole Bush family here,” says Tim. “The reason they came was really my father.” Even Mikhail Gorbachev has visited Barnacle Billy’s. Tim Tower treats every guest the same. I watch as he carries a tray of food for an older couple as they find a table. “People come here maybe once or twice each summer, but they come every summer. Familiarity is big. We remember you.”

Take a seat in the large dining room, or if it’s a warm enough day, head for the deck perched just above Perkins Cove. A server will come by soon to take your drink order. Do not hesitate to order the rum punch, inspired by Billy Tower’s trip to Saint Croix many years ago. You can ask for the ingredients, but no one will tell you. When I ask, Tim merely says, with a wink, “There’s more rum in it than there should be.” And always leave room for blueberry pie.

If you’re looking for a larger menu and full service, it’s only steps away at Bar- nacle Billy’s Etc. The Towers bought the building next door in 1989 to open the sister restaurant. “Dad always wanted the opportunity to do something a bit more,” says Tim. “He was also afraid someone else would buy that place and do some- thing that didn’t fit in Perkins Cove. But what my father really wanted was the garden in between the two buildings.” Now the garden blooms brightly in high season, providing a colorful welcome to Perkins Cove. At Barnacle Billy’s Etc., the offerings extend far beyond lobster. Fried seafood is lightly battered using a recipe that remains unchanged since the first day. The center-cut charbroiled sword- fish is excellent, as are the steaks. A Maine crabmeat salad is enormous, overflowing with fresh vegetables and seafood. All the lobster specialties are available as well, all served with the same warm hospitality as next door.

Billy Tower passed away in July 2013. “He left the hospital to go home,” says Tim, “but he wanted to come by here one more time to look at the gardens, the restaurant, everything he had built. He never took a day off.” Tower died later that day. His wife, Bunny, comes into the restaurant occasionally, “but it’s hard for her to be here without my father,” Tim says. “We’re all lucky to have worked for Dad,” says Cathy. Very little has changed since Barnacle Billy’s time, and that’s the way they want it, says Tim. The food remains largely the same, featuring the lobster roll people return for year after year, best enjoyed with a rum punch. And the personal touch feels familiar, honed through generations. “Timmy is the boss, because he’s the oldest and the most responsible,” says Meg. Every day Tim wears the same outfit: a white polo, white jeans, and white sneakers. “It’s the same thing my father wore,” says Tim. “Sometimes people call me Billy. I don’t correct them.” 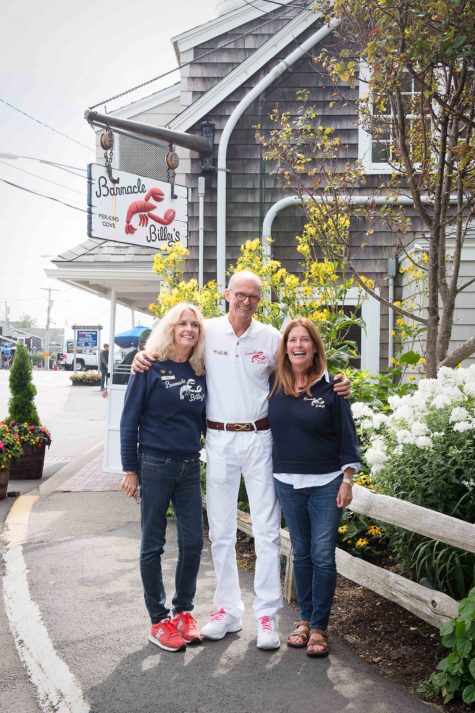 Tim Tower, the general manager of Barnacle Billy’s, with his sisters, Meg Tower (left) and Cathy Koppstein, outside their family’s restaurant in Ogunquit. 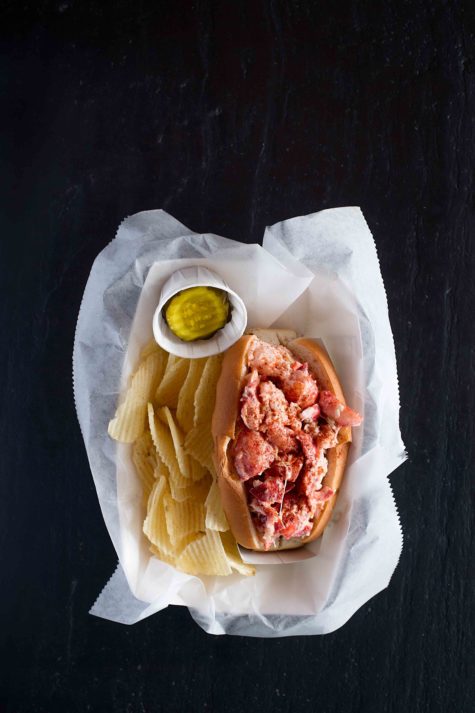 A classic Maine lobster roll served with chips and a pickle.