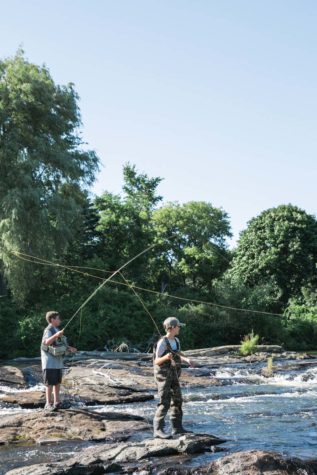 Ned Lane and Liam Ireland fly fishing at First Falls, just above the head of tide, accessible from the town of Yarmouth’s Grist Mill Park. 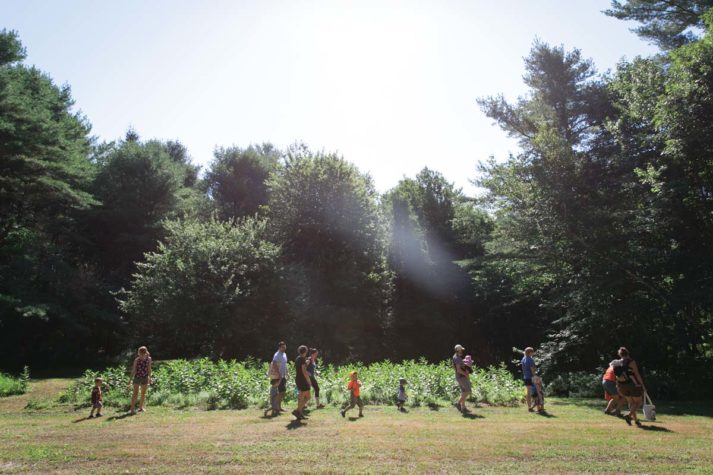 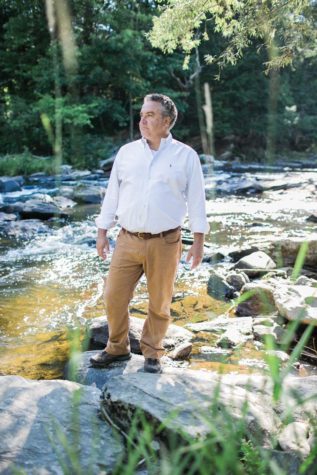 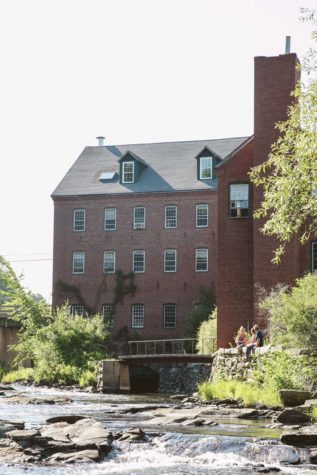 The Sparhawk Mill on Bridge Street was long powered by a dam at Yarmouth’s Second Falls. 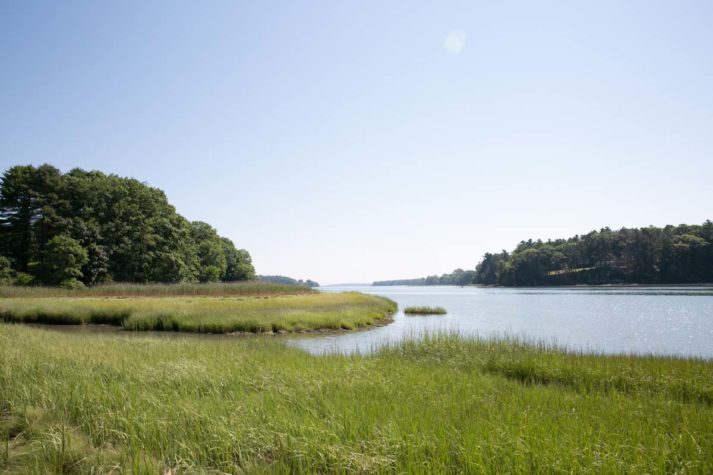 The salt marsh at the edge of the Spear Farm Estuary Preserve, looking toward Casco Bay. Visible is Lanes Island at the mouth of the Royal River, recently conserved and opened for public camping thanks to its donation by the Gorman family of Yarmouth to the Maine Coast Heritage Trust

Communities collaborate to create access to nature and nourishment for the soul.

The hum of a motor reverberates through air that is thick with the heat of summer, as a boat zips upstream. We turn a corner in time to see a juvenile eagle launching itself from a branch. I am in my hometown, on a trail that I have traversed a hundred times before. Today, the familiar becomes new again at the Spear Farm Estuary Preserve.

Located off Bayview Street in Yarmouth, the preserve is part of a 3,700-acre network of conserved land, farms, and trails within the Royal River watershed and Casco Bay that are stewarded by the Royal River Conservation Trust. As noted in their vision statement, this locally based nonprofit believes that “connected waterfronts, preserves, and forests provide a growing population with places to explore, learn, and nourish the soul.”

“I think almost all water gives people some sense of calmness, of being able to relax or have adventures,” says Alan Stearns, executive director of the Royal River Conservation Trust. “The Royal River includes the estuary headed out into Casco Bay, which has some amazing views, and the full coastal fog, and all that comes with it. But then so much of the Royal is inland, with small waterfalls, places to go paddling, places to go fishing.”

Founded in 2002, the 600-member Royal River Conservation Trust evolved from a nonprofit called Friends of the Royal River that began in 1992 and eventually merged with land trusts in Yarmouth, North Yarmouth, New Gloucester, and Pownal. “The unifying piece was the river,” says

From the beginning, the Royal River Conservation Trust has understood the importance of collaboration and partnership. The trust owns 11 preserves and has helped create or expand a dozen local and state parks, including Bradbury Mountain State Park in Pownal. It also holds conservation easements on numerous farmed or forested acres, and helps maintain properties owned by municipalities, such as the Spear Farm Estuary Preserve, which belongs to the town of Yarmouth. Its outermost property is the Littlejohn Island Preserve in Casco Bay.

“So many people with so much generosity want us to succeed,” says Stearns. “When a parcel of land becomes available— sometimes it’s donated, sometimes we have to raise money for it—but if we’re going after the right project, there are any number of people in our communities who want to help us. People who want to do the right thing for their kids, for their grandkids, for the next generation.”

Kyle Warren is the stewardship and outreach director for the Royal River Conservation Trust. On the day that we meet at the Spear Farm Estuary Preserve, a volunteer has dropped by to discuss repairs to the planks that extend over muddy places on the trails. Warren explains that their volunteers run the gamut—from retired executives to students who are performing community service hours for nearby high schools.

“The most engaged volunteers are the ones that are passionate about the project that they are working on,” says Warren. Warren notes that a family in Yarmouth has donated its time and resources to create a more accessible boardwalk for the Littlejohn Island Preserve. “They’ve been incredibly passionate about it, and it’s noticeable in the product of the work,” says Warren.

Warren, a registered Maine Master Guide with a geology degree from St. Lawrence University, grew up on Mooselookmeguntic Lake in the western mountains of Maine. Each week, Warren hosts the Royal River Conservation Trust’s Rain or Shine Club, which introduces community members to Royal River Conservation Trust trails. “There’s a whole variety of different ways that these properties could be used, whether it’s for mountain biking or trail- less hiking,” says Warren. “For us to bring groups of people—including, in many cases, toddlers—on these weekly outings, it helps to reinforce the importance of being in the wild, even if it’s not in the far reaches.”

The group often meets at the Spear Farm Estuary Preserve that we have ourselves come to explore. This preserve has ample parking and gentle, sloping trails. As we embark across a field at the trail’s beginning, we pass a cluster of milkweed pods that have escaped the mower’s blades. Warren says that this was intentional; milkweeds are resting places for pollinators, such as monarch butterflies. We pass by an educational kiosk that describes the salt marsh to our right as “a natural incubator,” which produces “more plant matter yearly than our best cultivated crops.” The kiosk also informs us that the acorns at our feet likely come from the Quercus rubra, or northern red oak.

Farther down the trail, long vines wrap around trees that have been carefully culled to provide a view of the Royal River. A second kiosk tells us that these vines are an invasive non-native species called Eurasian bittersweet. During our walk around the trail, Warren and Stearns stop several times to pull choking strands of bittersweet off of struggling plant life.

Through the trees we see a small pond, with a drainage pipe that connects to the Royal River under the footpath. Stearns explains that the pond is manmade, created in 1968 as part of a government initiative to give migrating waterfowl a place to rest.

This was not the first time that the Royal was diverted for purposes other than its own. Beginning as early as 1674, the four falls of the Royal River in Yarmouth were harnessed to provide hydropower for grain, lumber, textile, and other mills.

Although these industries are long gone from the river, the dams remain. Because of this, few fish make it upstream. The Royal River Conservation Trust is asking the town and downstream businesses (including two marinas) to consider removing the dams or upgrading fish passage. “Today, almost no fish of any species can go up over the dams,” says Stearns. “Fish passage matters. Whether it be alewives or shad, or any number of other species, these dams affect 100 square miles upriver.”

Bill Gregory, a resident of Cousins Island in Yarmouth, became interested in fish passage on the Royal River after a canoe trip with his friend, Art Bell. “We discovered that it wasn’t a river, really,” says Gregory. “It was a pond. The river behind the Elm Street dam is very quiet, lovely to canoe on, lovely to ice skate on in the winter. But its character as a river has been taken over. We couldn’t hear birds. We didn’t see evidence of life forms in the river. Turns out there are eels in the river and there are some fish and so forth—but it just didn’t seem alive.”

Gregory was profoundly impacted by this experience. “I’m essentially a nature mystic,” says Gregory, an author and retired United Church of Christ minister who formerly worked at Woodfords Congregational Church in Portland. “My experience of God comes through nature more clearly than any place else.”

This past May, Gregory and Bell organized a community-wide celebration in honor of World Fish Migration Day. “Art and I have taken on the task of helping the citizens of Yarmouth see the river first, and then see it as having life and worth, even sacredness, of its own, and ask the question not how can the river serve us, but how can we serve the river,” says Gregory.

Whether the Royal River nourishes us spiritually or physically, we who live in its watershed are undeniably affected by its presence. Walking the trails at Spear Farm Estuary Preserve, I think of all that the Royal River has provided me over the years: a place to run, a place to swim, a place to sit in quiet contemplation. A place to see a young eagle soaring toward the sun.

“If we are going to use nature, we have to be concerned for its well-being and grateful for what it provides us,” says Gregory. “By bringing that into the conversation, I think we can look at the Royal River with a possibly expanded spiritual perspective. At least that’s my hope.” 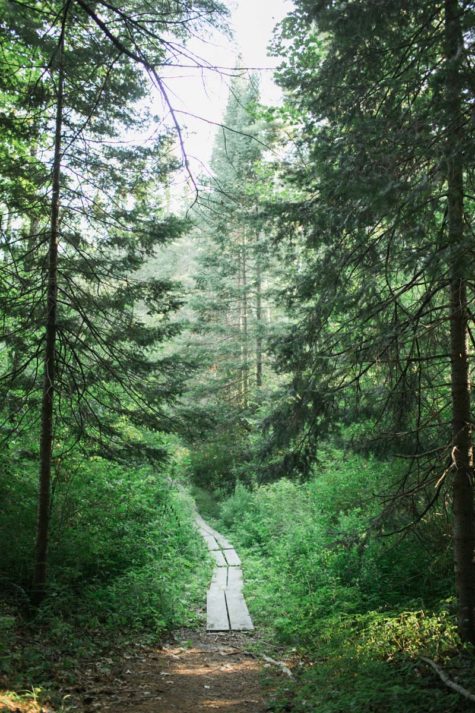 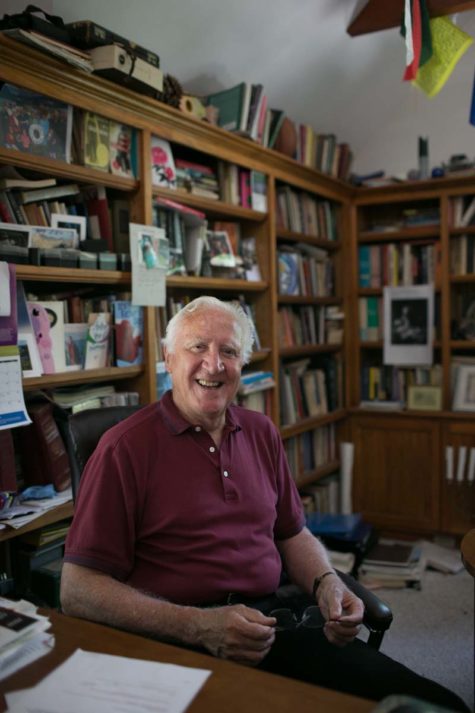 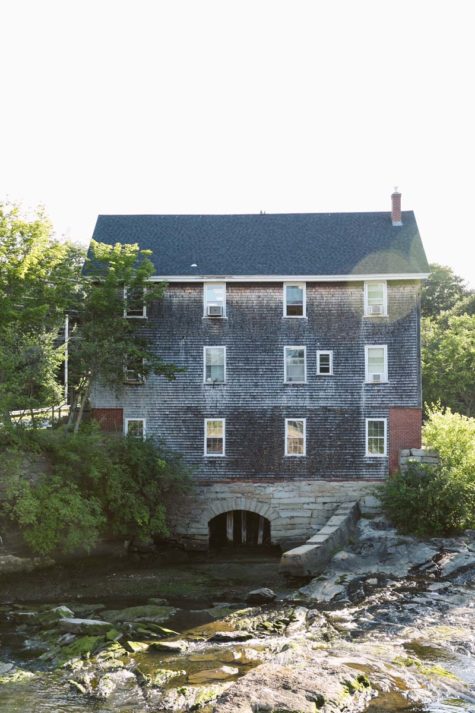 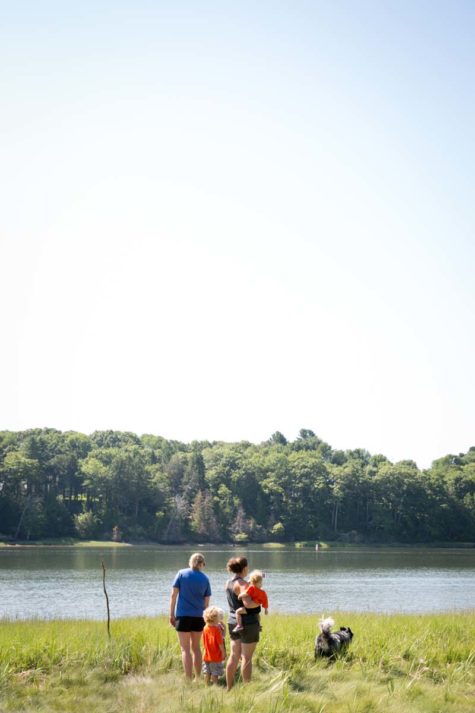