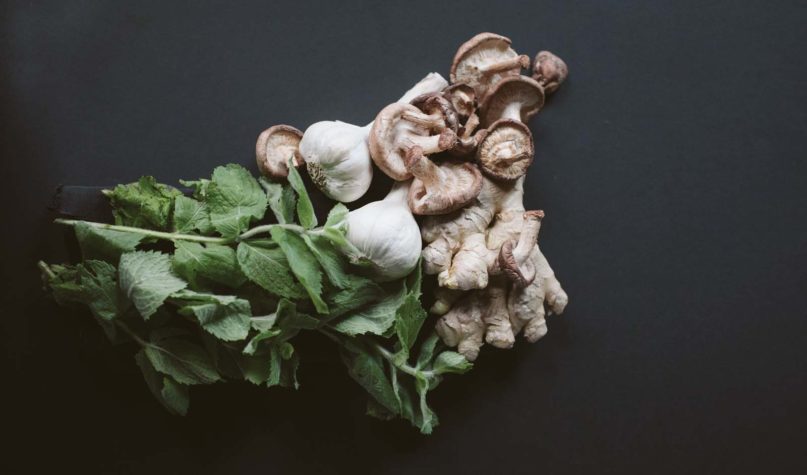 Feeling a little under the weather, or simply hoping to maintain wellness during cold season? Our state’s farmers, producers, and merchants offer a variety of sustainably harvested plant-based and natural products to help you ward off winter woes, from immune-boosting Chaga Mountain tea to sweet elderberry syrup from Maine Medicinals. While items such as these aren’t a substitute for a healthy diet, staying active, and managing stress, they can be useful additions. I recommend them frequently in my family medicine practice.

Although all of these products are safe when used in appropriate amounts, some may interact with medications or cause allergic reactions in susceptible individuals. Please check with your medical, homeopathic, or naturopathic provider for advice regarding your specific situation, especially if you develop concerning symptoms such as difficulty breathing or high fever. You may also wish to consult your pharmacist or get additional information from a reputable source, such as the Natural Medicines Comprehensive Database, if you have questions about the ingredients in these products.

From Goranson Farm in Dresden, at the Portland Farmers Market

The bulb of the garlic plant has been used for medicinal and culinary purposes for centuries. Once used as protection against evil spirits (according to folklore), recent studies suggest that garlic’s health benefits are wide-ranging, from preventing cancer to lowering high cholesterol. It may also be useful for warding off colds and shortening their course once symptoms begin. Chop it up for use in sauces or salad dressings, or eat it raw if your sensibilities—and the sensibilities of those around you—allow. Use with caution if you have a bleeding disorder or take medicine that thins your blood.

From North Spore in Portland

Like all mushrooms, shiitakes are a type of fungus. While some mushrooms are poisonous (and thus great care is required when foraging for mushrooms in the wild), many are valued in Chinese medicine for their immune-boosting properties. Recent studies suggest that the active ingredient found in shiitakes, lentinan, may be useful in cancer and HIV treatment. Shiitakes have a rich, earthy flavor and are frequently used as a meat substitute. They can be safely incorporated into one’s daily diet; try them in a vegetable stir-fry or added to miso soup.

Ginger’s pungent root has warming properties that make it popular in traditional Chinese and Ayurvedic (Indian) medicine. Native to the warmer parts of Asia, ginger is now cultivated in South America and Africa—and in Maine greenhouses (although the ginger pictured here is from out of state). In addition to calming an upset stomach and decreasing inflammation in the body, ginger can be used to ease upper respiratory symptoms. Mince it and sauté with scallions and slivered daikon for a side dish (radishes are a wonder food for sinuses), add it to a soup stock, or steep a few slices in a mug of boiling water along with a touch of honey to make a warm beverage.

From Tom’s Honey in Buckfield, at the Portland Famers Market

Honey is bee-distilled magic. Our favorite pollinators produce the golden-hued liquid that takes on the flavor and color of the plants from which the nectar has been gathered. Several of my health care colleagues recommend that their patients take a tablespoon of local honey daily, beginning a month before allergy season, to reduce the symptoms of hay fever. One study found that one type of honey from buckwheat flowers significantly reduced nighttime coughing and improved sleep, similar to the cough suppressant dextromethorphan. Try one to two teaspoons at bedtime, or take honey with tea to soothe a sore throat. Do not give to children under the age of two, as it has been linked to botulism. Use care if you have diabetes—honey is a natural sugar.

From Chai Wallahs of Maine in Blue Hill

In India a chai wallah is a person who makes or sells tea. Chai is made from Assam tea (an Indian black tea) and added spices. Chai Wallahs of Maine makes its tea with cinnamon, ginger, cardamom, black pepper, cloves, and nutmeg. These warming spices, which are used in Ayurvedic and Chinese medicine, are each considered to have healing properties. Cinnamon, for example, can be helpful for lowering blood sugar, while cardamom and pepper are good for digestion.

From North Spore in Portland + Chaga Mountain in Dennistown

Chaga has been called the king of medicinal mushrooms. This cold-loving fungus grows on trees—it is particularly attracted to birches—where it absorbs nutrients from the trunks. Chaga has been studied for a range of problems, including cancer prevention, diabetes, and high cholesterol. An immune stimulant, it is generally safe when made into a tea or taken daily in a tincture. People who have a bleeding disorder or take medicines for their blood sugar should use with caution.

At Little Giant in Portland

Made from the fermented juice of apples, apple cider vinegar is popularly thought to have many healing properties—an idea dating back thousands of years. It has been credited for everything from improved digestion and metabolism to lowered blood sugar. This vinegar is specially formulated for drinking. Try a small amount mixed in seltzer for a delicious end-of-day treat.

The human tongue has taste receptors for five different flavors: sweet, salty, sour, savory (also called umami), and bitter. The typical diet does not contain as much bitter food—examples would be leafy greens like dandelion, cacao, and bitter melon— as it once did. Bitter foods cause the liver to produce bile, helping with digestion. Bitters Tonic No. 3 is one of several tonics created by Herbal Revolution. This one comprises plant extracts (including burdock root, lemongrass, and astragalus root) that benefit the digestive, immune, and nervous systems. Try a small amount before meals or at bedtime.

From Maine Medicinals in Dresden

Elderberry is the dark purple fruit of a bush once planted by Maine farmers for home use in jams and jellies. According to Joyce White of the Maine Organic Farmers and Gardeners Association, elderberry was once known as “nature’s medicine chest” in England, and was used by Native Americans to treat rheumatism, sciatica, coughs, and other conditions. Recent research affirms its immune-stimulating properties and suggests that a small daily dose of elderberry syrup at the onset of symptoms may be effective against the flu and other viruses. If you are a do-it-yourselfer, take care when using the whole elderberry plant, as the stems, leaves, and unripe berries have high levels of poisonous compounds called cyanogenic glycosides. Maine Medicinals offers a ready-made version of this syrup, as well as other items such as Local Bee Pollen, for seasonal support.

At Lois’ Natural Marketplace in Portland and Scarborough

Mint, which grows rampant in Maine gardens during the summer months, has many health benefits. Its leaves can be steeped in boiling water to combat stomach complaints, respiratory issues, and the common cold. When rubbed on the temples, peppermint oil may ease the pain of headaches; when added to a steam bath, it can clear the sinuses. Menthol, a compound extracted from mint, is used with other soothing oils like eucalyptus to create NOW Chest Rub Relief. Apply it to the neck and throat to ease congestion and coughing.

There is nothing better than a warm, plant- based beverage to help soothe the body during times of stress and illness. Tea, whether green, black, yellow, oolong, or pu-erh, comes from the leaves of the plant Camellia sinensis, and is full of antioxidants. Herbal teas, also called tisanes, are not technically tea because they do not contain tea leaves. Most tea is grown outside of the United States, but there are several Maine companies, including Little Red Cup Tea Co., that import only organic and Fair Trade Certified varieties. Tea can be enjoyed every day—just be aware that it does contain caffeine, which may be an issue for those who are sensitive to this substance. 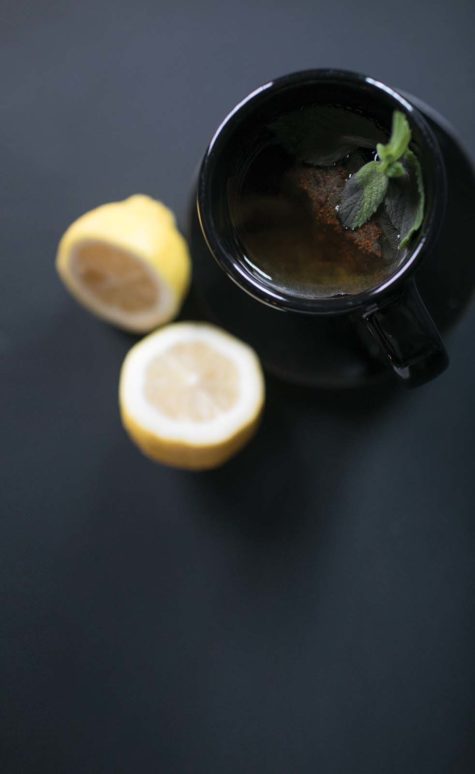 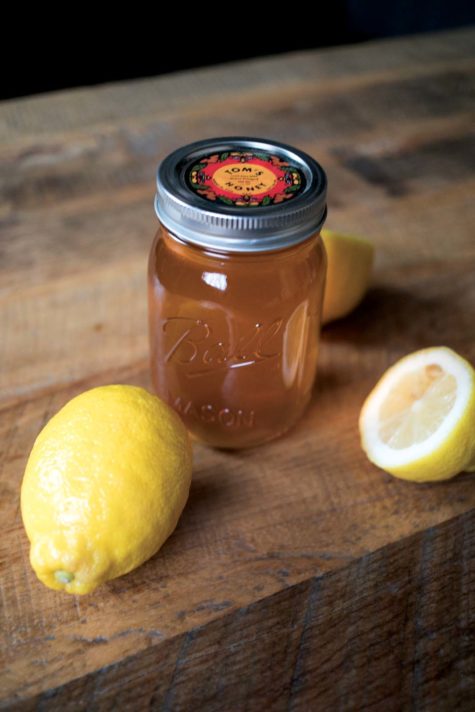 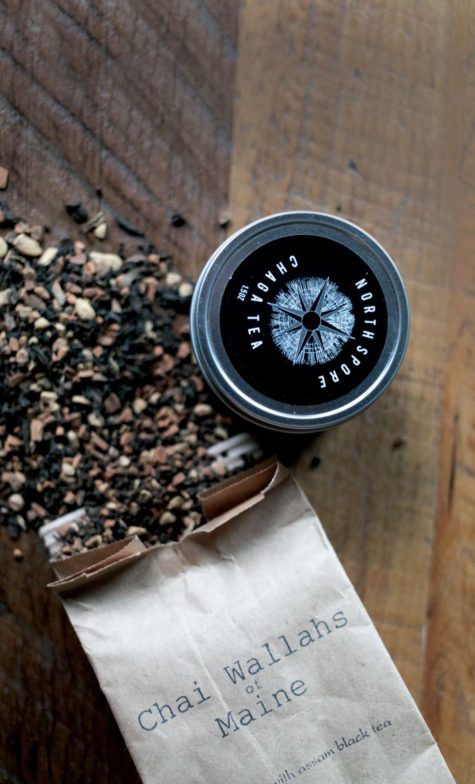 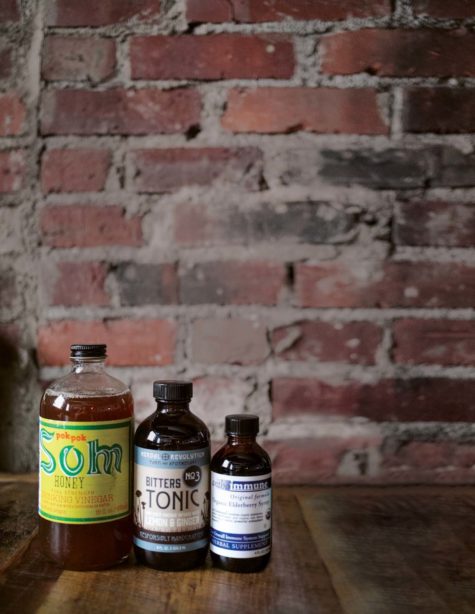 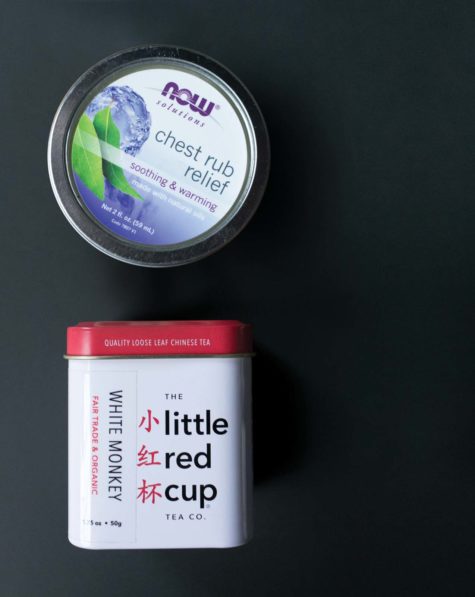