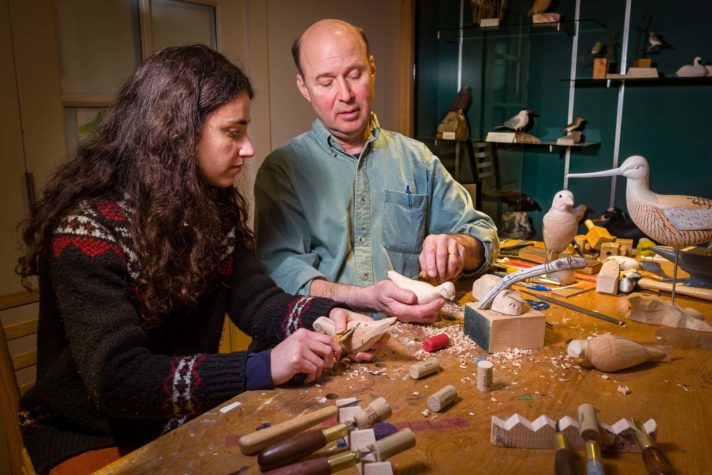 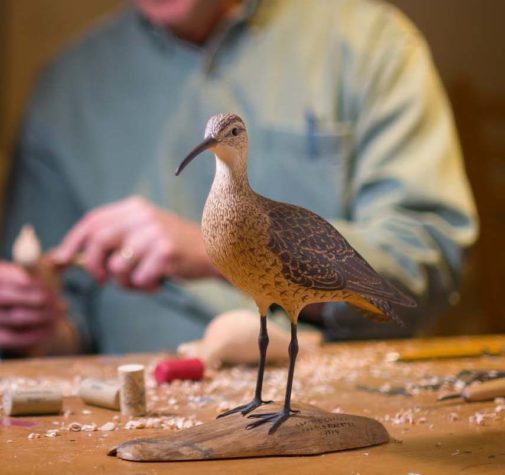 Just outside of the quiet downtown of Southwest Harbor on Mount Desert Island, one of Maine’s most intriguing museums sits just off Main Street, tucked into a residential neighborhood. The Wendell Gilley Museum, opened in 1981, is named for one of the most prominent wood-carving artists of the 20th century, a Southwest Harbor native devoted to carving birds. A master plumber by trade, Wendell Gilley began carving miniatures of birds in the 1930s, following an inspirational visit to the New England Museum of Natural History in Boston. He eventually turned to larger-scale work, eventually producing some 10,000 pieces, mostly carved out of basswood, meticulously detailed and realistically painted.

Many artists work in seclusion, but not Wendell Gilley. He welcomed visitors to his studio and was always happy to share his knowledge as he worked. “Anyone who knew him talks about being invited into the workshop, where he would talk to them about birds and carving and invite them to try their hand at carving,” says museum Executive Director Sean Charette. Gilley’s legacy of engaging the community is continued by one of the museum’s three full-time employees, wood-carving artist Steve Valleau, who as of June 1 will have been on staff for 34 years. “We see part of our mission as keeping Wendell’s story alive,” says Charette. “Steve has a carving studio in the back of the museum; when you get there you end up in a conversation with him around his workbench. He’ll ask about your interest in carving and ask if you want to pick up a knife and try it.” The museum also offers a variety of carving classes for older children and adults, and hosts a weekly carving club for members. “A lot of parents will say they are surprised at how it holds their child’s attention to sit in a small group and learn how to hold and move the knife,” Charette says.

In addition to Gilley’s bird carvings and its regular programming, the museum is continuing its tradition of noteworthy special exhibitions this summer. Treasures of the Farnsworth: Maine Masterworks, which opens June 28 and runs through October 14, features an impressive collection of workings from the Farnsworth Art Museum in Rockland, including paintings by George Innes, Marsden Hartley, Emily Muir and Louise Nevelson, among other celebrated Maine artists. Also in this significant exhibition are a number of paintings by Jamie Wyeth, notably “Portrait of Orca Bates,” a five-foot tall piece in which the subject is holding a gull, and bird sculptures by Bernard Langlais, Edwin Gamble and Nevelson. On display through October, a second exhibition highlights work by Harold Haertel, a decoy carver born in the same year as Wendell Gilley, 1904, should especially resonate with visitors interested in the art of bird carving, says Charette.

Open from June 1 through mid-December, the Wendell Gilley Museum stays true to its core mission while continuing to look for ways to engage and inspire the community. “There’s a real personality here. We have a lot of visitors who come to see Wendell’s bird carvings, and then they get to have an experience they may not have anticipated with Steve,” says Charette. “The museum is a beautiful, rich space and there’s more here than you might expect.”