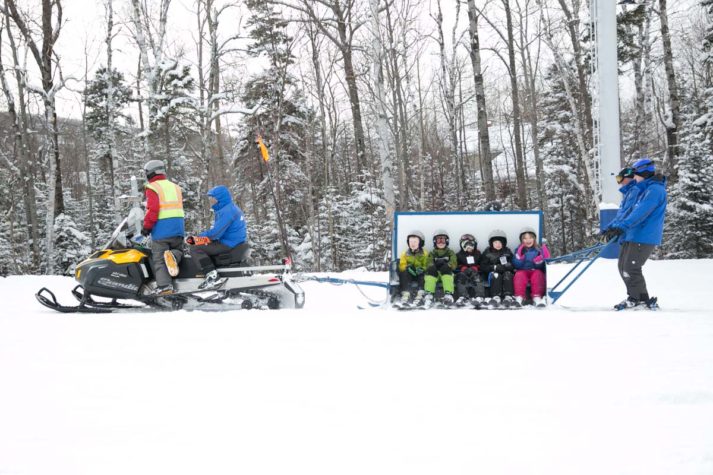 Students from Strong Elementary School getting a tow. 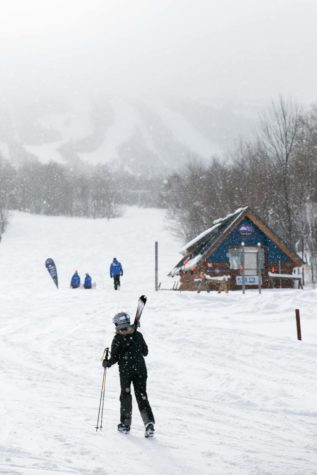 A skier heads up the mountain as the snow flies. 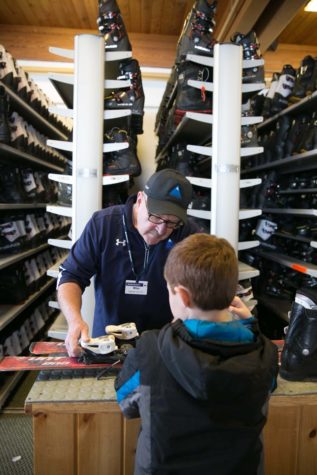 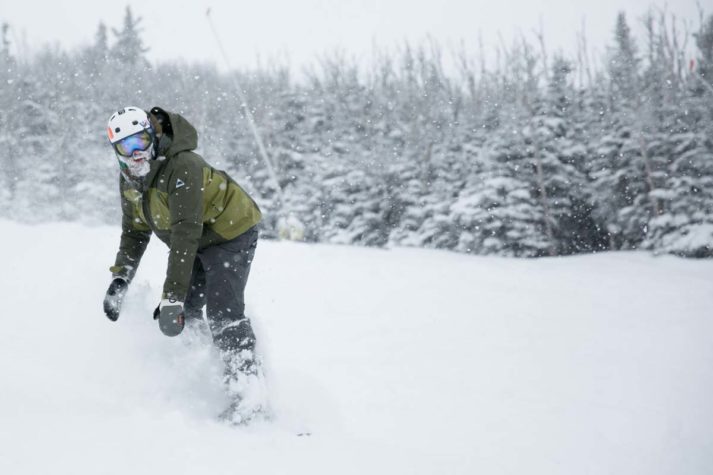 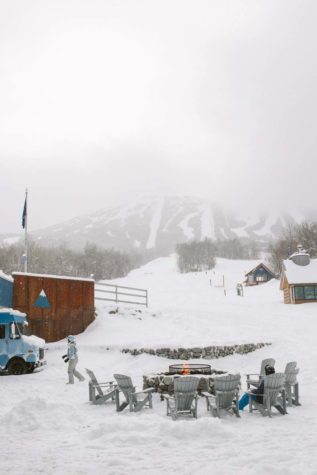 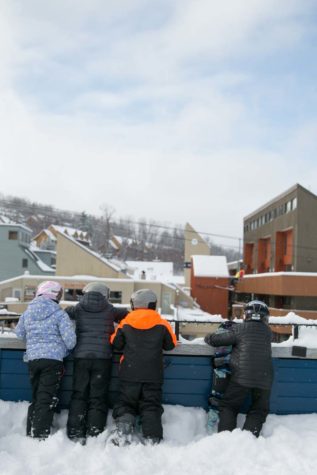 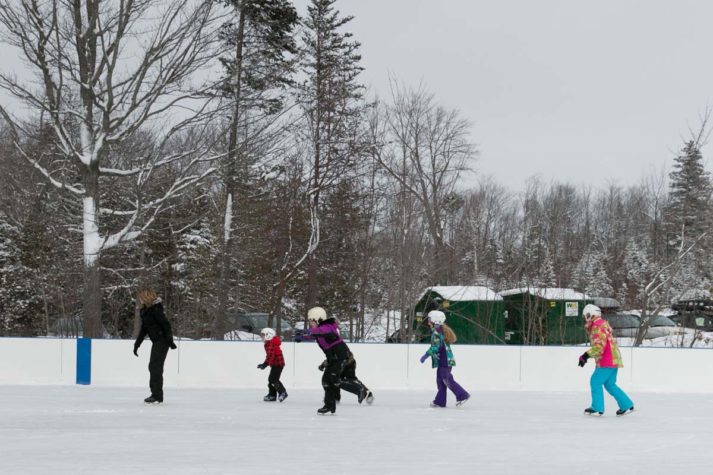 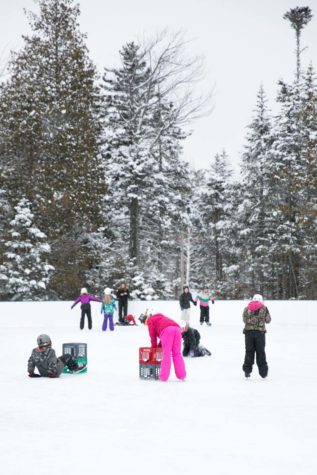 Kids learning to love a world-class mountain, right in their backyard.

Like many Maine children, I learned to ski at an early age. My sisters and I spent many January evenings bundled in oversized 80s-style parkas, snowplowing our way down the slopes of Lost Valley in Auburn on rental skis, in the company of our Yarmouth classmates. The sparkling lights of night skiing; the frigid temperatures that burned our gloved fingers; the echoing din of the base lodge—I carry these sensations with me to this day.

Sugarloaf Mountain-area children have similarly been learning to ski on their own local slopes for the past 50 years. Subsidized by the Sugarloaf Regional Ski Educational Foundation, thousands of schoolchildren from four schools in Franklin County have taken part in the ski/skate program at Sugarloaf since 1964.

“Skiing is a lifelong sport,” says Bruce Miles, president of the Sugarloaf Mountain Ski Club, a nonprofit organization that preserves the mountain’s heritage, while supporting the local community and promoting social and athletic activities for people of all ages. “Skiing is something you can do by yourself or with a friend, and you can keep doing it no matter what age.”

Miles has been a Sugarloaf skier (known as a Sugarloafer or Loafer) since 1961. “It’s a really free feeling when you’re out there,” says Miles. “You’re on your own on the hill. The conditions change from day to day, sometimes from hour to hour. You get to challenge yourself. You’re surrounded by incredible scenery, too. You’re outdoors in the cold, fresh air of the winter.”

The ski/skate program was founded by then- president of the Sugarloaf Mountain Ski Club, G. Norton Luce, who was on the board of the U.S. Eastern Ski Association. “A friend who was on the board with him owned a ski shop, and they were getting rid of a bunch of kids’ skis,” says Miles. “They were going to take them to the dump and Norton said, ‘No, give them to us. We can put them to use.’” Luce and his wife, Jean (also an active member of the ski club), divided the skis up between elementary schools in Stratton and Kingfield, and talked the Sugarloaf administration into giving the schoolchildren lessons. Sugarloaf began offering children the opportunity to learn skating and cross-country skiing after the Sugarloaf Outdoor Center was built in 1975.

The ski/skate program, which also includes snowboarding, now reaches about 400 children—grades kindergarten through eighth from elementary schools in Kingfield, Stratton, Strong, and Phillips—each year. The schools provide bus transportation, and teachers, staff, and administrators help to coordinate and chaperone.

Before the season begins, ski shop manager Mike Buxton goes to the schools and works with his team to weigh and measure each child. By the time they get to the mountain, each child has equipment waiting. “The first day they come, everything is ready for them,” says Miles. “They’ve got it laid right out. A kid comes in and sees his or her name on a pair of skis, and says, ‘Those are mine.’”

Most children come to the mountain four to six times during the season. “The instructors who work with the ski school that are involved in this program really love doing it because these kids are just so great to work with,” says Miles.

“Teaching a young child is much easier because, number one, most kids don’t have fear,” says Miles, who began working as a coach and ski instructor at Sugarloaf in 1968, after graduating from South Portland High School. “Fear is a learned thing. Kids, they learn quickly. Most of them have good balance. They aren’t too worried about what they’re going to look like. They aren’t worried about falling.”

Several ski/skate program graduates have gone on to participate in national and international competitions. World Cup circuit snowboarder Alex Tuttle began skiing at Sugarloaf when he was six years old; Sugarloafer Sam Morse is now a member of the U.S. Ski Team.

“The skiing world is not a huge world,” says Miles. “The people are connected. If I go out West to Aspen or Vail, chances are pretty good that I’m going to run into somebody that knows somebody that I know that skis at Sugarloaf.”

Sugarloaf skiers who start young are also more likely to volunteer or work in the ski industry. “I know in my own case I started skiing at a very young age, and it changed the direction of my life,” says Miles. “It introduced me to a whole different culture.”

The Sugarloaf Regional Ski Educational Foundation provides most of the funding for the Sugarloaf ski/skate program, which creates a minimal cost for each child. “It’s about $5 a session per kid for lifts, lessons, rental equipment, hot chocolate, and a cookie,” says Miles. The Sugarloaf Ski Club also contributes to the cost of the program by offering individual scholarships, and by giving money to each school. The schools determine how this money is used.

“Some of the kids would show up without proper mittens,” says Miles. “The cold weather is a big factor, and ski clothing is not the cheapest kind of clothing to buy. We give them money that they can use for that. They can also use that money to help defray the $5 cost to some of those kids. It doesn’t sound like a lot of money to us, but it does to a family that’s struggling to make ends meet.”

Children who enjoy the ski/skate program can get additional coaching through the Sugarloaf Bubblecuffers and Carrabassett Valley Academy weekend programs. The Sugarloaf Ski Club gives out more than $30,000 a year in scholarship money for these programs. “The Sugarloaf community is a very giving and caring community,” says Miles. “The Sugarloaf experience has got more than just skiing. It really has a soul.”

Tom Butler has been a Sugarloafer since 1987. Now the director of skier services at the resort, he has been working with the Perfect Turn Ski and Snowboard School since 1992.

This is his twenty-fifth season with the ski/ skate program. “Knowing that we are making a difference in their lives totally brings us back to why we wanted to teach skiing in the first place,” says Butler. “It provides a brief moment for these kids to experience something that many of them normally wouldn’t have the opportunity to appreciate.”

Whether the children who go through the Sugarloaf ski/skate program will become World Cup snowboarders, ski instructors, or loyal members of the Sugarloaf community is impossible to say. But it is certain that the past 50 years have provided thousands of kids with indelible memories of snowplowing down their local slopes.

“Every session with these kids is so important for us because we have no idea what the chain reaction of our teaching will lead to,” says Butler. “We may only be teaching skiing but for these kids, during their time here, it’s the most important job in the world.” 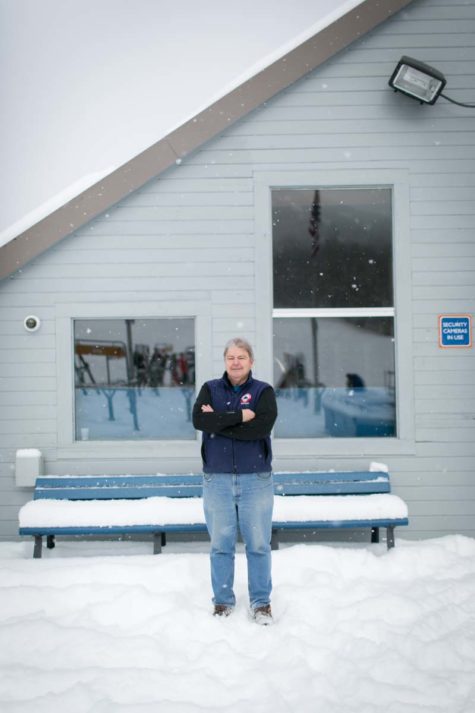 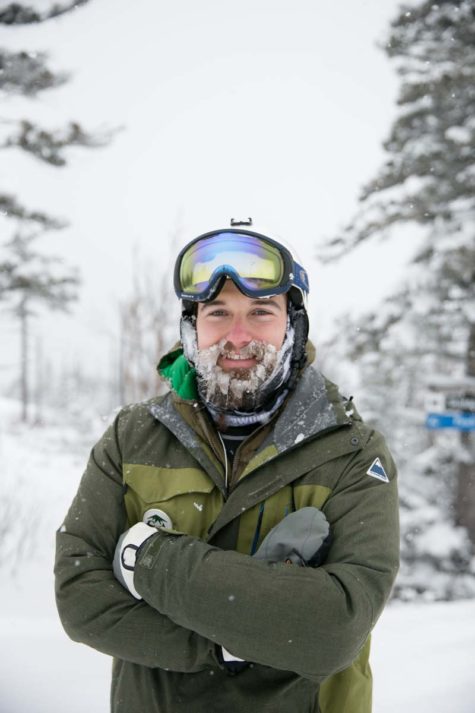 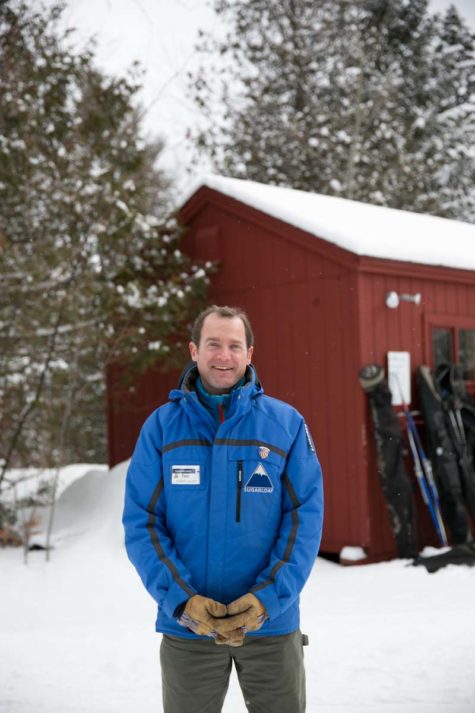