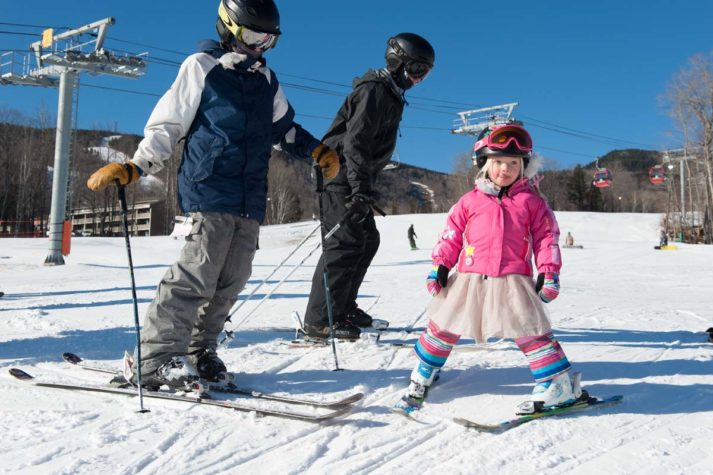 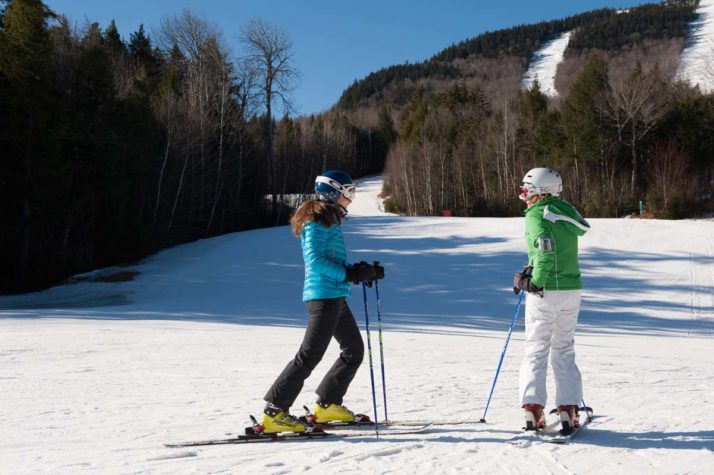 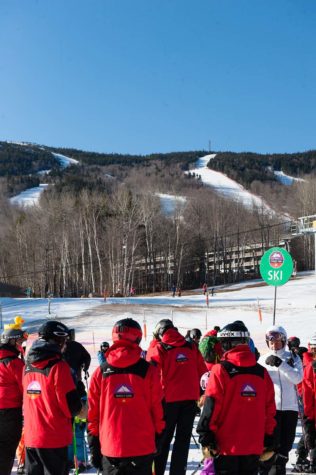 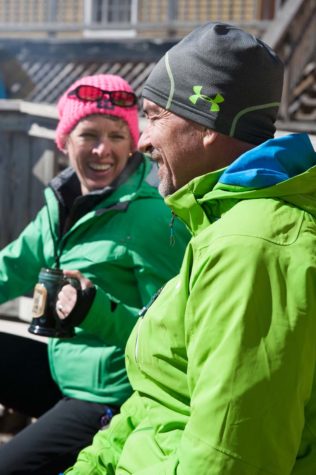 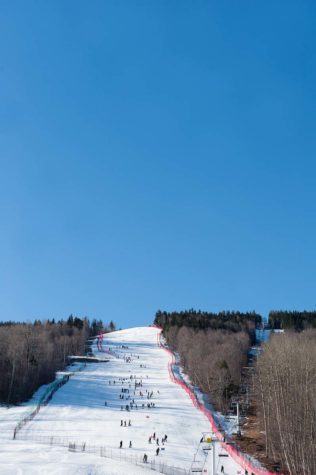 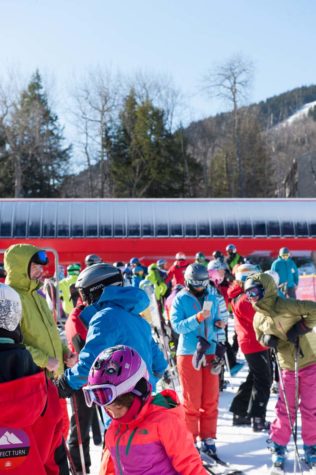 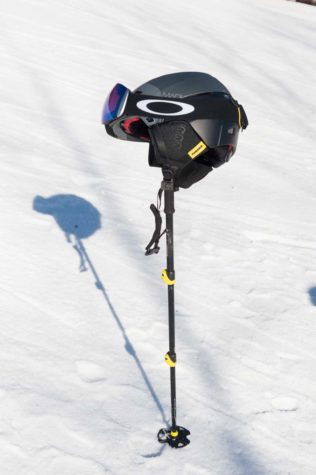 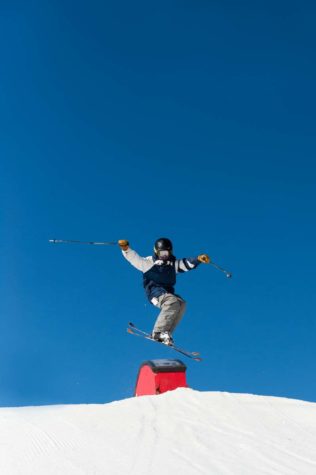 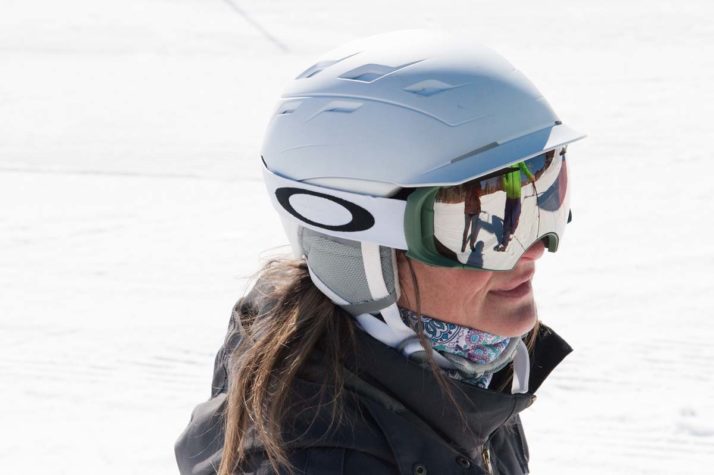 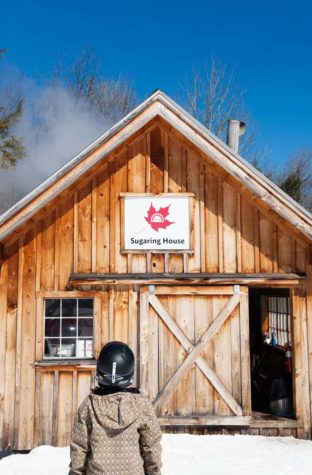 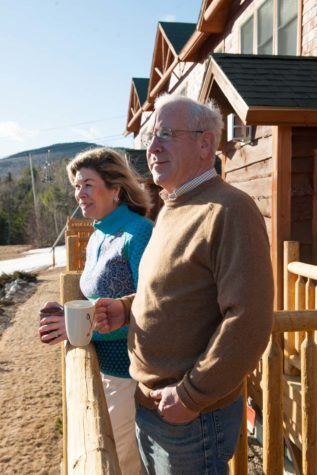 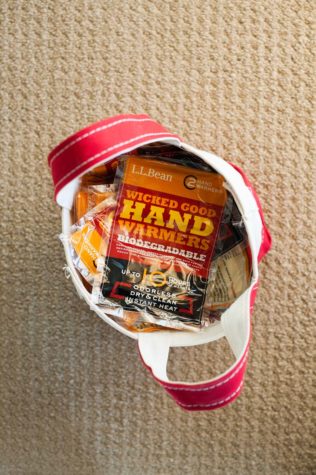 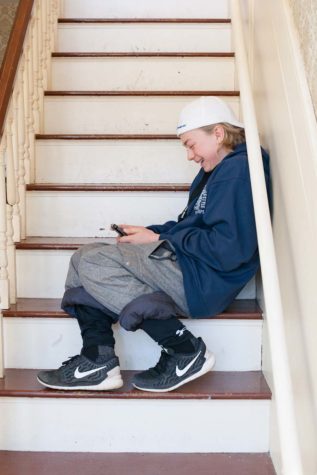 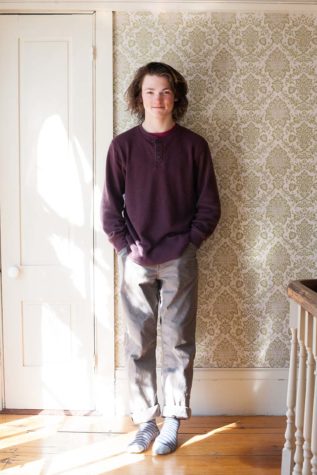 The smell of corned beef and the sound of sizzling eggs fill the air in the Grammas family’s rustic kitchen. I’m seated at the table of their Bethel vacation home, sipping a ceramic mug filled with strong black coffee. The four children move around the kitchen, helping Corey and Elizabeth distribute plates and cups. Twelve-year-old Caleb volunteers to fry the eggs. “He’s a great cook,” says Corey with a proud smile. “Like all the kids, he’s learned almost through osmosis.” Corey’s a restaurant owner and chef and even this casual meal is a testament to his cooking chops. The breakfast table is cluttered with plates, mugs, and mittens. It’s a chaotic, happy scene—typical, I learn, for this family of ski enthusiasts.

On the weekends, the family spends much of their time together, making up for the days they live in two separate households. This winter, the family has a somewhat unconventional arrangement, where Elizabeth lives in Bethel (and 16-year-old Noah attends school at nearby Gould Academy) and Corey commutes back and forth between Bethel and Gloucester, Massachusetts, where Caleb attends middle school. Elijah, age 13, also skis in the winter program at Gould Academy, a private school for young athletes, and Caleb comes up for weekend races. “None of this was planned,” admits Corey. “We first came to Sunday River through friends of ours. We bought tickets and rented a place. A few years later, we decided to buy a house,” says Corey. “We didn’t even know what Gould was at the time. But the more we learned about the academy, the more we realized what a good fit it would be for our family.”

Although it’s hard for Corey and Elizabeth to be apart during the week, they deem this choice a “good sacrifice.” It’s been particularly good for 16-year-old Noah, who has found
his place at Gould, where he learned to make the lovely green-and-blue ceramic mug that’s currently holding my coffee.

“Noah’s ski instructor saw something in him,” Corey says, explaining how Noah ended up at the athletic-leaning private school. “When Noah did a visitation there, he was like, ‘Whoa. This is where I belong.’”

First the mountain, then the ski house, then the school. It wasn’t a simple recipe for a lifestyle, but it works. And they make plenty of time to be together during the weekends. During the summer, the family vacations together on a houseboat they’ve been renting for years. Corey runs the family business— Lobsta Land, a family-friendly seafood restaurant located in Gloucester—and the sons spend their time skateboarding, skiing, and golfing. The youngest child, a three-year- old named Piper, is the only girl in the brood (in addition to the three teenage boys, Corey and Elizabeth also have two sons in college). “She’s the chattiest,” Elizabeth says of her daughter. “She learned to talk at a young age and hasn’t stopped.”

This family of eight has made Sunday River their part-time home, and over the years they’ve created a number of traditions that revolve around the resort. “We’ve got it figured out. On Christmas Eve we do a Christmas dinner with prime rib and Yorkshire pudding,” explains Elizabeth. “Then we have nachos at the mountain, and then that night we have sushi.” The kids, she says, have become great at making their own sushi rolls. In the spring, they often join other families to tailgate in the Sunday River parking lot.

“We’ll do Bloody Marys, pancakes, and egg sandwiches,” Elizabeth says. “Now, Sunday River has even started doing a tailgating day. They usurped our idea.” But she doesn’t blame them.

“The more the merrier,” adds Corey.

A week later, I’m back at the mountain, and this time I’m out to lunch with Bruce and Jennifer Forsley and their two children at the Shipyard Brew Haus. The Forsleys’ kids, Annabelle and Teddy, both attend Gould Academy, where they race competitively. “We never compete against each other, though,” Teddy tells me. “Annabelle gets a little competitive,” her mom adds.

Annabelle and Teddy have been regaling me with stories from the slopes as their parents polish off plates of mac ’n’ cheese and French fries. The menu at Shipyard is filled with stick-to-your-ribs food, and since the entire family has already been skiing for hours, they need it.

As the vice president of sales and marketing at Shipyard Brewing Company, Bruce spends a lot of time at brewpubs and ski resorts. Although he grew up going to Sugarloaf, Sunday River has become his favorite spot in Maine. “Sugarloaf brings in mostly people from Maine. Sunday River is a broader market,” he explains. “We were afraid at first that it wouldn’t be the same since we used to go to Sugarloaf. But the reality is that you still see your friends from Sugarloaf. We didn’t lose anything. We gained a lot. We gained new friends in New Hampshire, Pennsylvania, Maine, and Massachusetts.”

Jennifer agrees. “I’m a Sunday River girl,” she says. With her short hair and her flushed pink cheeks, she’s the picture of good health. “I come here and I just feel…” she gives a relieved sigh and shrugs her shoulders. “It’s the sun, the mountain, and the people.”

For the Forsleys, Gould Academy is another major draw. Both Annabelle and Teddy
board here during the winter, living in white clapboard dorms and spending their days alternating between indoor classes, outdoor lessons, and training. “At Scarborough, I didn’t like presenting in front of certain people in my class,” Annabelle admits, comparing her program at Gould with her public school on the coast. “But I love winter term because you get so close with everyone. It’s relaxing. They can even make fun of you and it’s OK—it’s in a joking way.”

Gould has been similarly good to Teddy, who tells me that his “happy place” is “right here in this corner.”

“I’ve learned so much here,” he says. Even simple things, like how to do his own laundry, have given him a greater sense of independence and self-sufficiency. “I’ve learned about how to balance life,” he says. “I have to make time to tune my skis, to ski and train, and to do school work. I learn time management and how to handle my own problems.” He also enjoys the academic classes. His favorite, he says, was a winter ecology course that involved an overnight camping trip. “We learned about building tents, animals tracks, and hypothermia.”

“It’s life stuff,” says Bruce. “Subjects at Gould always come back to the outdoor experience, from nutrition to sports to psychology. If you’re skiing in Maine, you might need to know about hypothermia. The school is about creating future athletes, and that’s why they love it.”

While Jennifer and Bruce miss their children fiercely during the winter months, they
are proud of the bold, funny people they’re growing up to be. “Your children are really only connected to you for so long,” says Bruce. “We made the decision about Gould as a family.” I ask him if this mountain lifestyle— the commute between two houses, the nights spent away from their kids—ever gets too hard or too hectic. He pauses to consider.

Later that evening, after walking off a few pounds of French fries, I find myself knocking on the door to Fran and George Philip’s townhouse. Located at Tempest Ridge, the sunny apartment is decked out with vintage ski posters and maps, and a shaggy white sheepskin rug that begs guests to shuck off their shoes. Tonight, the couple is hosting
an après-ski party for a few of their friends, complete with appetizers from local catering company Gourmet in a Pinch.

“We always have a house full of people,” Fran says. “We’ve got family ages three to 80 sleeping in every bed of the house when we can.” With four bedrooms, four and a half baths, and both an upstairs and a downstairs living room, there is plenty of space to cram in relatives and friends.

“When we go out skiing, we’re usually on the trails with three generations,” she tells me. Dressed in neutral hues and sipping a glass of white wine, Fran is the image of elegance. Before she retired, the Harvard Business School graduate worked as the chief merchandising officer at L.L. Bean. She serves on the boards of several businesses, including Sea Bags (where she is a part owner), Vera Bradley, Totes Isotoner, and Lee Automotive.

But while her resume is serious, her attitude is not. Fran has a sassy sense of humor and a sharp wit, which come in handy when she’s wrangling her four-year-old great-niece. “Sunday River is great because there is something for everyone on every lift and every peak. Even if you have older people in the group, or really young kids, you can find a nice trail for the entire group.”

George agrees. The couple has been together for 25 years, and in that time, they’ve merged their families and friend groups. The townhouse has played an essential role in this process—as have Fran’s abilities as a hostess. As the party progresses, I see less and less of Fran. She circulates from group to group, drawing people together wherever she goes.

The mountain, George explains, has this effect on them both. It’s even helped them connect with relatives from across the Atlantic. “Our Scottish family comes during the winter. They love Maine, and they had never heard of Sunday River,” he says. “But they love it. They say it’s even more fun to come here than it is to go to France.”

For Fran, the mountain is also a way to remember her dad, who passed away a few years ago. Her parents introduced her to Sunday River. She learned to ski at Sugarloaf, but she moved to Sunday River when her father started skiing there. “We had a special ski bond,” she says. “I miss him every day, but it’s part of why I love to be here. When I’m on the slopes, I think about him.”

Much later, after I drop off my gear, I meet a heavily tattooed couple in a hot tub at the Jordan Hotel. Although we spent some time chatting, we never exchanged names—it was one of those brief, friendly exchanges that happen every so often when you travel alone. Unlike everyone else I met, they had only been to Sunday River a few times. They’re not regulars—yet.

“My son, Nolan, he wanted to come here for his birthday,” explains one of the young parents. She had no idea where he got the desire to ski, but she wanted to support him. So, even though it was out of her budget, and even though she’s never been skiing herself, she figured out a way to bring him up for the weekend. “You know what?” she says. “He took to it right away. He’s just a natural athlete.” I can’t tell if it is the heat of the water, or if she is blushing, but she looks bright and glowing with pride. Her nine-year-old son has found something he loved, independently of her.

I ask her if it was a sacrifice. “No,” she says, echoing words spoken time and again by the families who make this their winter home. “I just want him to be happy. And he’s happy up here.” This mountain, as so many have told me, is worth it. 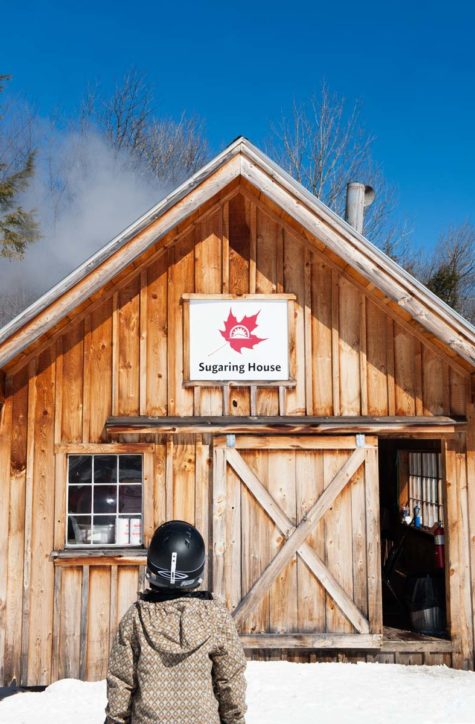 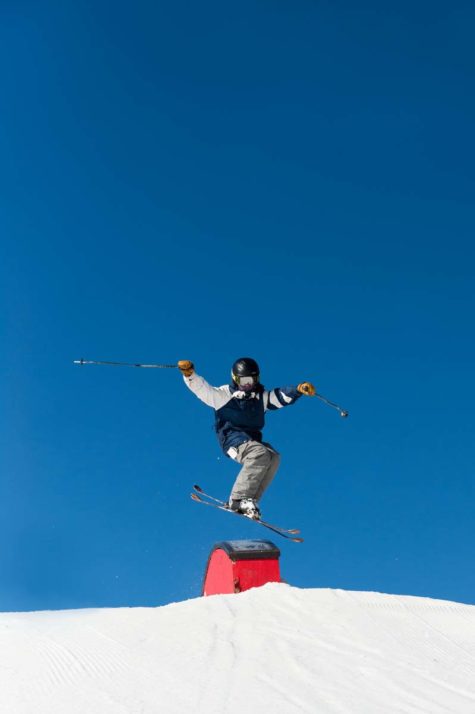 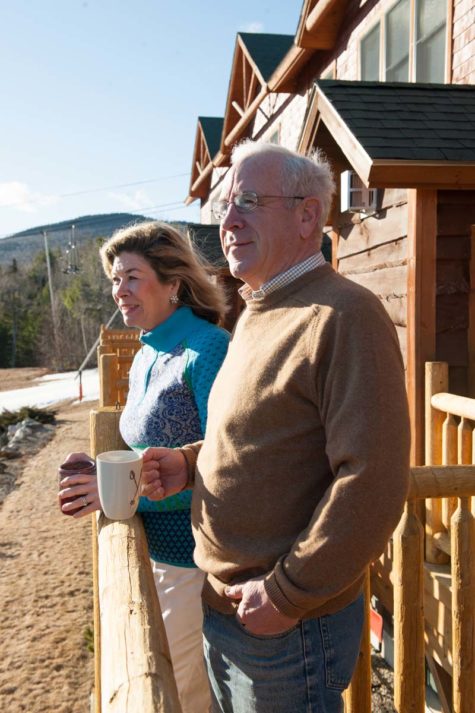 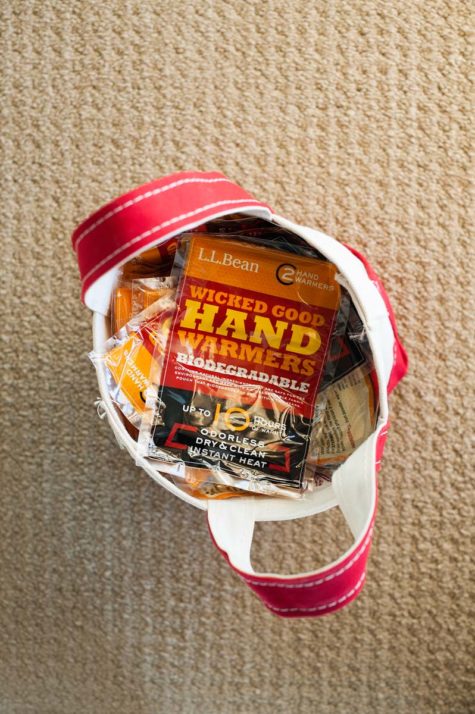 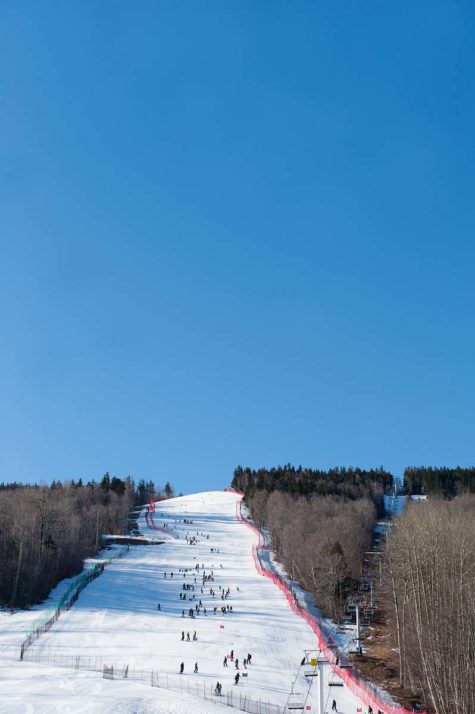